A cautious start to the week with reinfection spikes weighing

The surge of positivity that came with economies beginning to re-open is now being replaced with caution and doubt as infection rates are picking up. News that even as New York is set to further reduce its lockdown restrictions, infection rates in some US states are sharply picking up again. Consumer products giant, Apple, closing some of its stores again in Florida and Arizona suggests that the surge in retail sales seen in May could simply be a knee-jerk reaction rather than a full swing of economic recovery for the US. The result is a mixed look to major markets today. Recent sessions have seen a drift of dollar strengthening as previous weakness is being retraced. Although the early moves are looking slightly dollar negative, the trend over the past week has been for the dollar bulls to come out in favour as the session develops. Equities have been distinctly cautious (US dollar gaining ground tends to come hand in hand with risk aversion still) and indices are cautiously lower in early moves. Even though Treasury yields are showing little real direction of late, there has been a swing back into gold once more. This could certainly be born of a safe haven flow, but there is key resistance between $1744/$1764 which has restrained the price on several occasions in the past couple of months. 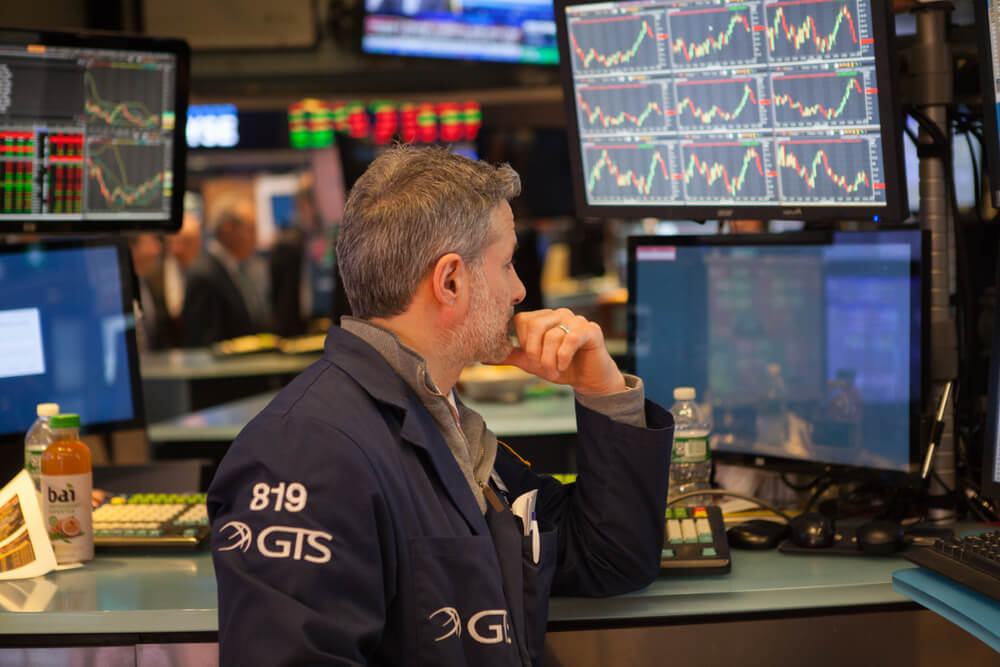 Wall Street closed lower, with the S&P 500 -0.6% at 3098, whilst US futures are relatively stable (E-mini S&Ps +0.4%). Asian markets were cautious (Nikkei -0.2%, Shanghai Composite -0.1%) but Europeans indices are shading negative in early moves. In forex, there is a slight risk positive and USD negative bias to early moves, but it will be curious to see this continue if equities see selling pressure build. Commodities show a risk negative bias, with gold just under $10 higher, whilst oil is around half a percent lower.

It is a quiet start to the week for the economic calendar. There is nothing of any note for the European morning, so later the focus will turn to Eurozone Consumer Confidence at 1500BST. Expectation is for a rebound to continue for a second straight month in June to -15.0 (from -18.8 in May). The US Existing Home Sales are expected to show sales declining for a third straight month in May, by -2.3% to 4.20m. However, given the recent positive surprises elsewhere on US housing indicators, the potential for a positive surprise will be elevated.

One of our key medium term themes across major currencies is that we see EUR outperforming versus both USD and GBP. The near term dollar technical rally is weighing on EUR/USD, but versus sterling the euro is performing well now. EUR/GBP is looking to breakout again. An original breakout above £0.8865 was a key moment back in May. The market then used the breakout as the basis of support for a higher consolidation range between £0.8865/£0.9054. Now we see the next stage developing. In the renewed euro outperformance along with sterling struggling, last week the bulls used support of a six week uptrend to propel the cross higher. Although a move above £0.9054 could not be held into the close, technical signals suggest the market is ready to pull higher now. Daily momentum indicators are all turning increasingly positive, with a bull kiss on Stochastics, bull cross on MACD and RSI rising above 60. A close above £0.9054 would complete another range breakout and imply +190 pips towards £0.9245 in due course. Weakness is a chance to buy EUR/GBP. There is a good basis of breakout support now between £0.9000/£0.9054. It has taken a while to break above £0.9000 but this should now become the basis of a floor for the bulls. The trend rises at £0.8930 today, with a key higher low at £0.8910. The is little real resistance until £0.9400/£0.9500. 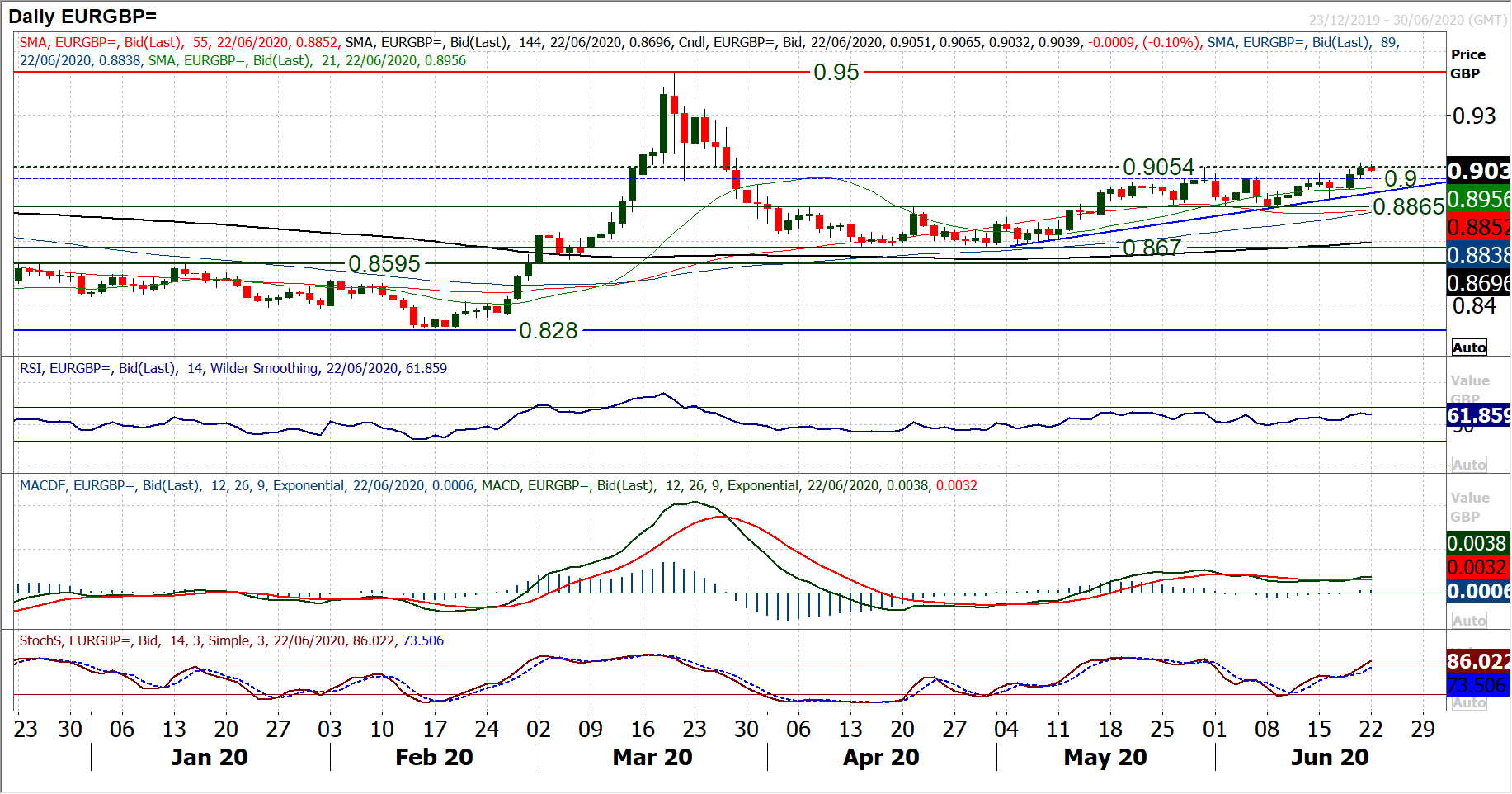 A corrective drift has weighed on EUR/USD for the past week and a half, dragging the pair back towards a five week uptrend and the previous key breakout $1.1145. However, we see this as a fairly orderly retracement and near term correction within what we believe to be a still developing medium term positive picture on EUR/USD. It will be the source of the next opportunity to buy. For now, though the path remains lower as momentum indicators continue to pull back. There has been an interesting tick higher in the early moves this morning but looking on the hourly chart, this seems to be a similar move to that which has been seen on several sessions recently. The hourly momentum indicators are again ticking into areas where the selling pressure has typically re-emerged over the past few sessions. Hourly RSI has consistently failed between 50/60 and hourly MACD lines under neutral. If this begins to consistently change, then the potential would be that the selling pressure could be dissipating. For now though with resistance $1.1210/$1.1260, these intraday bounces are being sold into. We are positioning for the next important higher low between $1.1015/$1.1145 but are mindful that if this is a bull market pullback, the correction could undershoot and the bulls could move sooner. 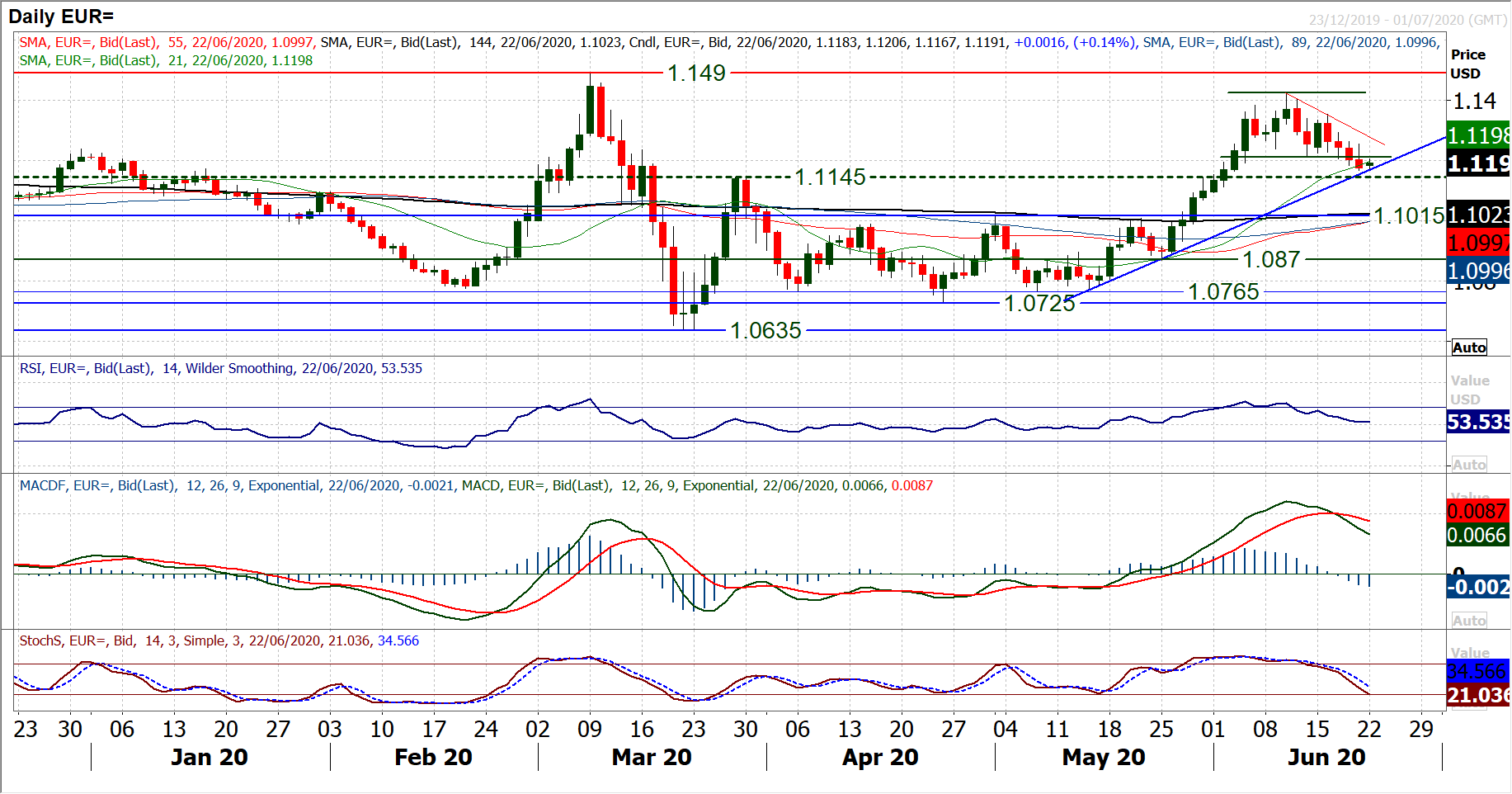 Having broken the support band of $1.2450/$1.2500, the near term breakdown was confirmed on Friday as Cable continued to fall away. Failing in a pullback to the $1.2450 resistance, the overhead supply proved to be too much and the market fell back once more into the close. With the price pulling below all moving averages again, and coupled with a collection of still corrective momentum signals, we see further legs in this move now. Subsequently, this morning’s early rebound is unlikely to have too much in it before the selling pressure resumes once more. With Stochastics accelerating lower, MACD lines have now bear crossed and RSI is falling in the low 40s, there is still downside potential. Intraday rallies are a chance to sell now and the hourly chart shows resistance $1.2400/$1.2450 is a sell zone now. Hourly momentum shows RSI failing around 50, MACD lines consistently under neutral and Stochastics already rolling over. Breaking consistently under $1.2360 means there is little real support now until $1.2160. It would need a move through $1.2550/$1.2585 resistance to really suggest there was any serious intention in a recovery. 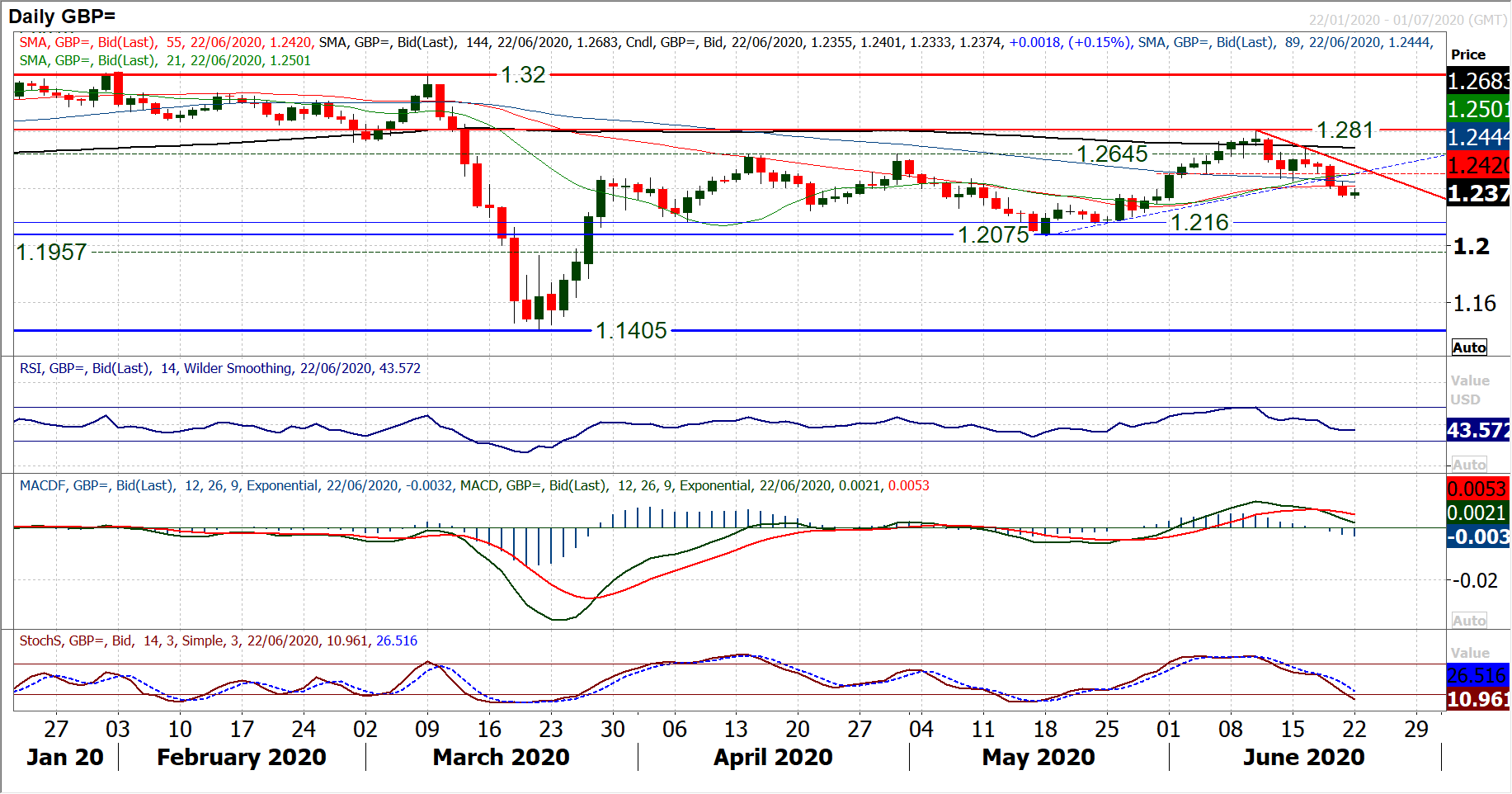 Dollar/Yen is still not really the place to be for all the action. The pair tends to go through phases of either drifting peacefully, or in sharp trend mode. Right now, it is very much in peaceful mode. A mild negative bias has developed in recent sessions as last week’s initial rebound has fallen over and the drift back is eyeing a test of support at 106.55. There is a floor of support for what is a medium term range 106.00/109.85, and whilst this support does still hold, the balance is for the support to cone under sustained scrutiny. For now though, the momentum configuration is still not calling for a range breakdown, with RSI still holding above 40 and MACD only marginally negative. Resistance at 107.60 keeps the pair camped firmly towards the lows of the range though. Until 106.00 is breached, it is difficult to see much direction. 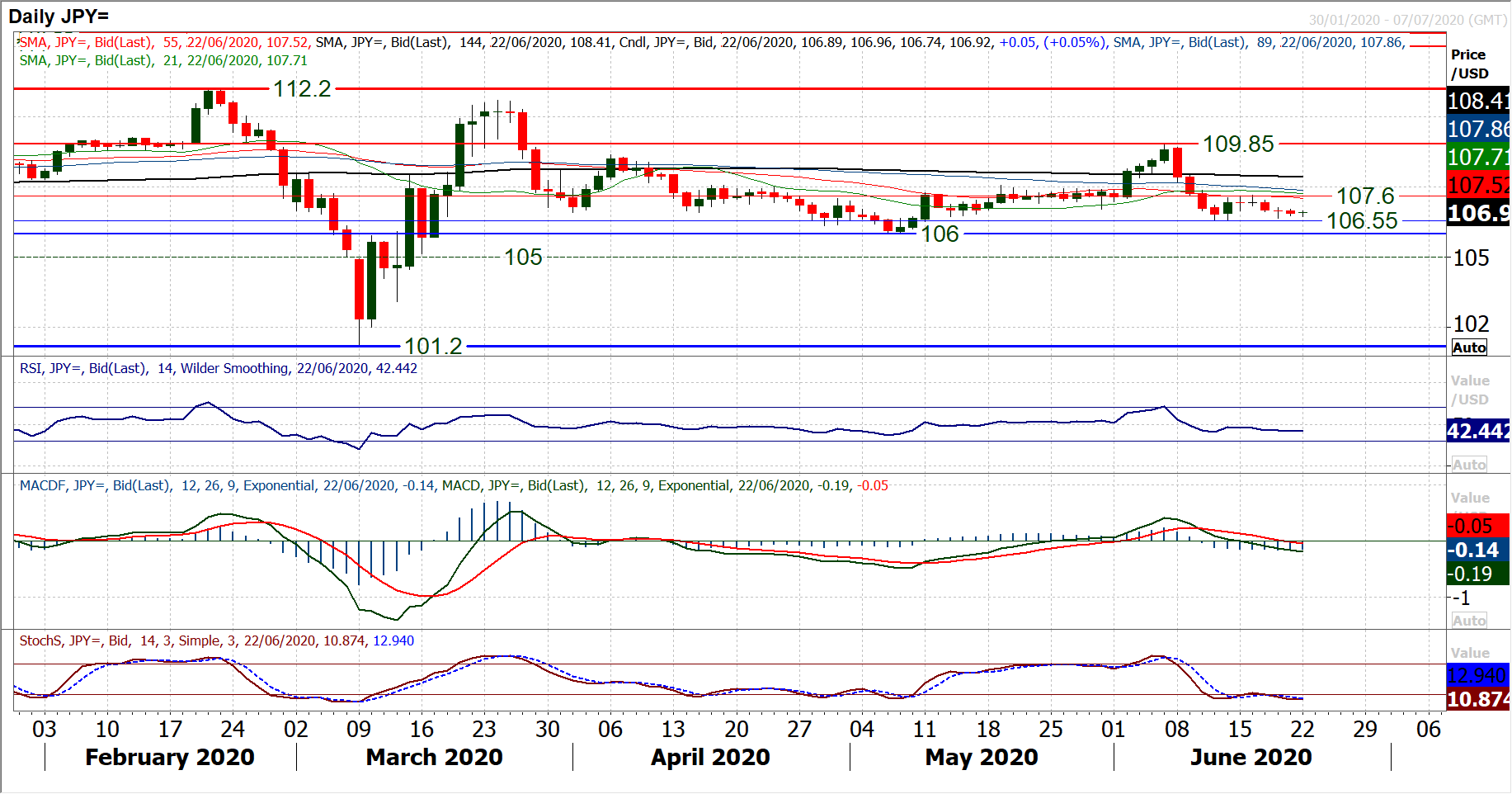 After several days of indecision and the market lacking conviction, on Friday the gold bulls found a big session to drive the market higher. The result has been an upside break through resistance at $1744 this morning. The first issue is now whether this is a move to be trusted. There needs to be a close above $1744 , and ideally with conviction clear of the resistance. Initial gains may have been pared slightly, but so far the move is holding. Momentum currently looks to be improving on the daily chart, with RSI above 60, whilst MACD and Stochastics also tick higher. However, these upside moves on gold into the $1744/$1764 range on gold have struggled for months, and we would need to see conviction before getting excited that this may be the upside break we have been waiting for. Ideally, the $1744 breakout now needs to become a basis of support, with the hourly chart showing $1736/$1744 now as a support zone. The hourly chart also shows a uptrend that can be derived over the past two weeks, coming in around $1726 this morning. We have been looking for an eventual upside break above $1764, however, given the number of false signals on gold over recent weeks, we remain cautious for now. 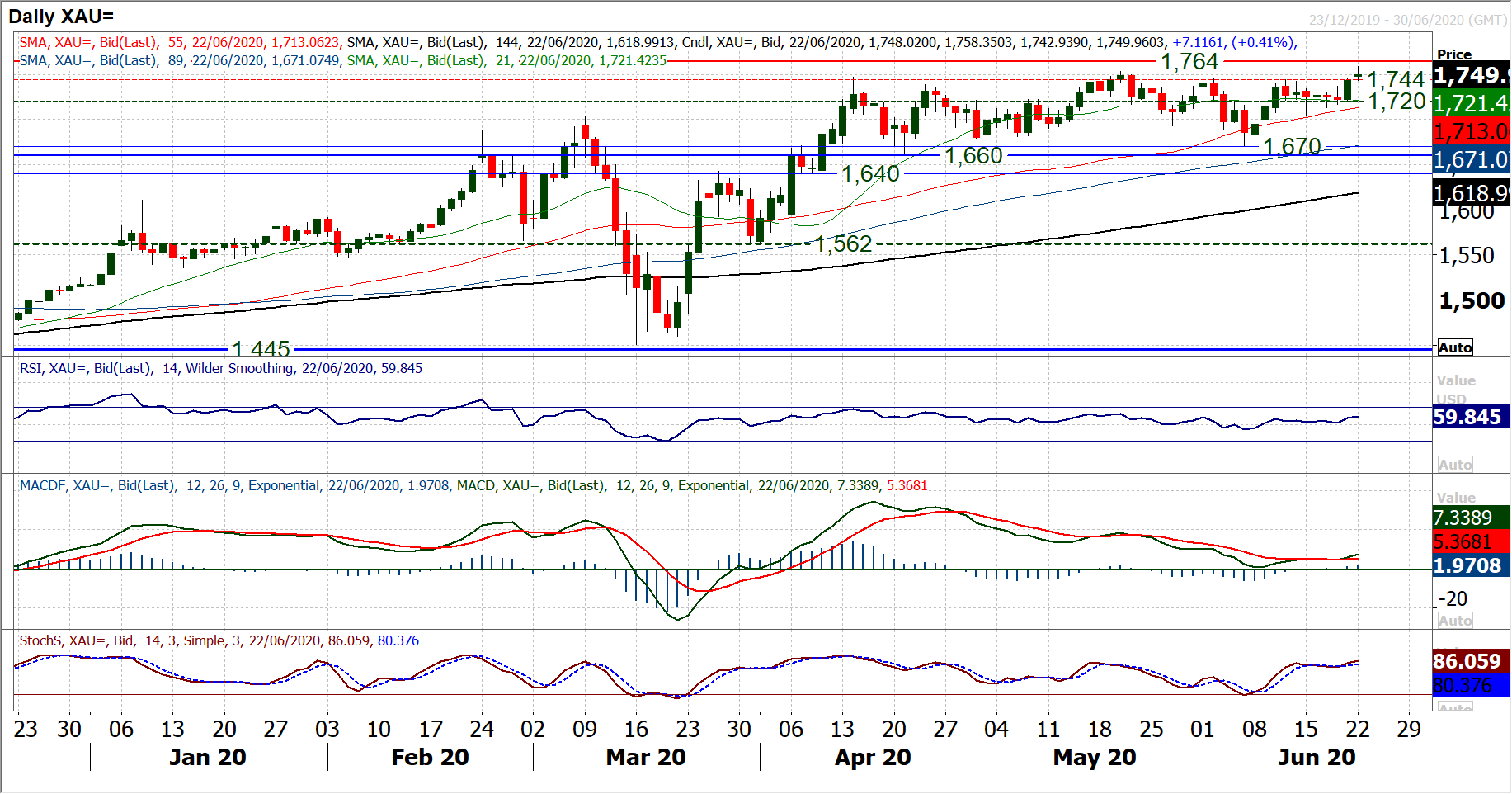 Another positive session for the bulls on Friday has put oil within touching distance of the key early June high of $43.40. With the Average True Range of $2.10, one decent session could drive a break to multi-month highs again. It is a slightly slow start to the session today with an initial consolidation, but there is little reason not to expect the drift higher to continue. Daily momentum indicators may not be as outright bullish as they have been previously, but they are still signalling to use intraday weakness as a chance to buy. The hourly chart shows good support now initially around $41.50, with a buy zone between $40.00/$41.50. As this recovery has moved through different stages in the bull run, we have taken a shallower and more considered uptrend of the past five weeks, which underpins the rally around $38.90 today. 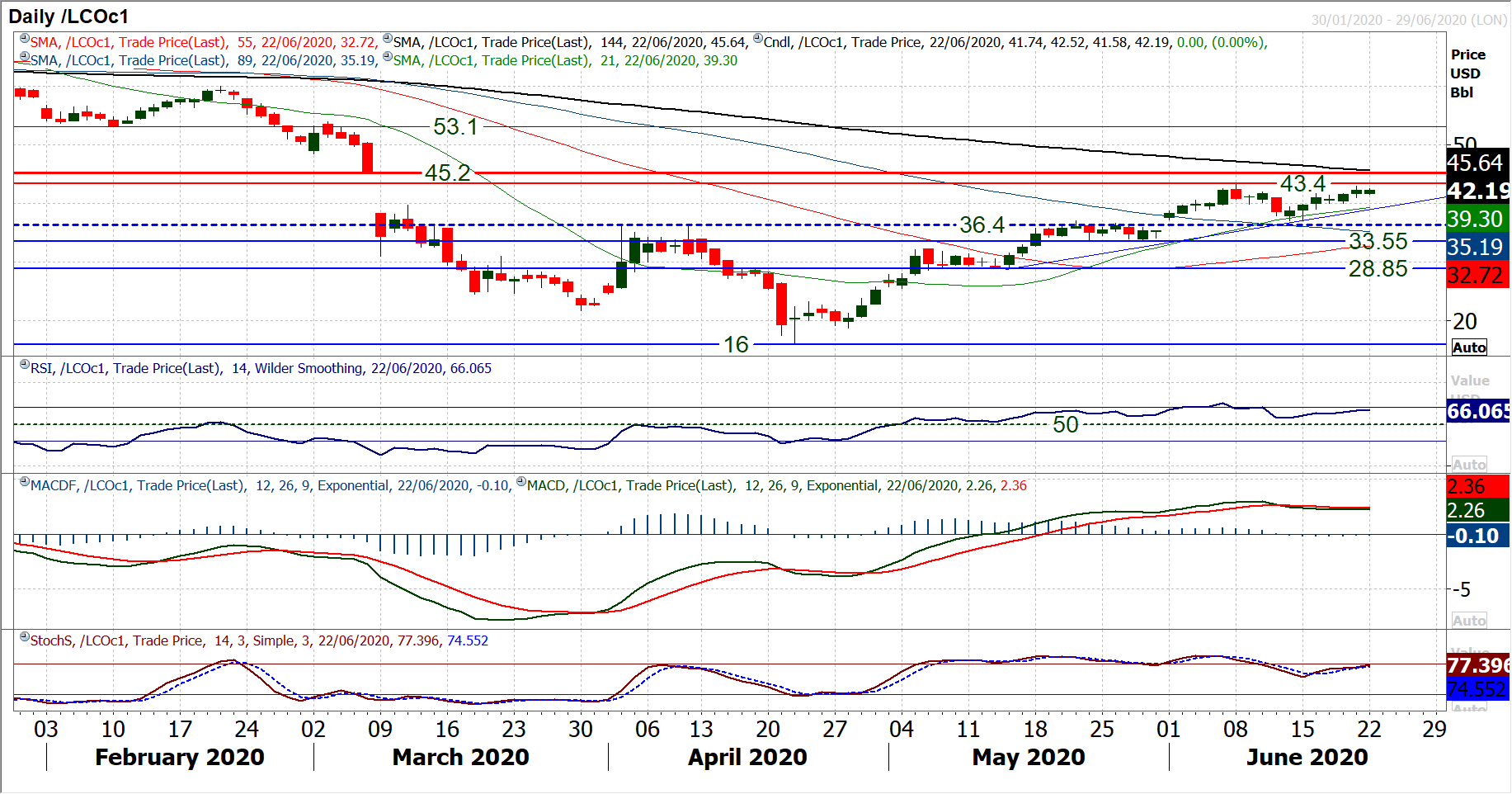 Wall Street appears to have developed a rather delicate position, with the Dow still grappling with an outlook of uncertainty. The big gap of the island reversal is still very much open and unfilled. This leaves the bulls still unable to regain control. The gap between 26,295/26,980 has been acting like a black hole for intraday rallies for almost a week now as resistance is found time and again before negative candles have completed. This is beginning to weigh on momentum again as daily RSI and Stochastics tick lower and MACD lines drift back. Futures suggest that they have another opportunity to make a fist of regaining control today but if there is another floundering rally then the frustration could begin to build into decisively locking in profits and a pullback. Resistance between 26,450/26,610 needs to be overcome first and then for the gap at 26,980 to be closed for the bulls to really be back in control. Until then there will be an uncertain outlook and the risk of a deeper correction back towards 24,765 will remain. Initial support 25,760. 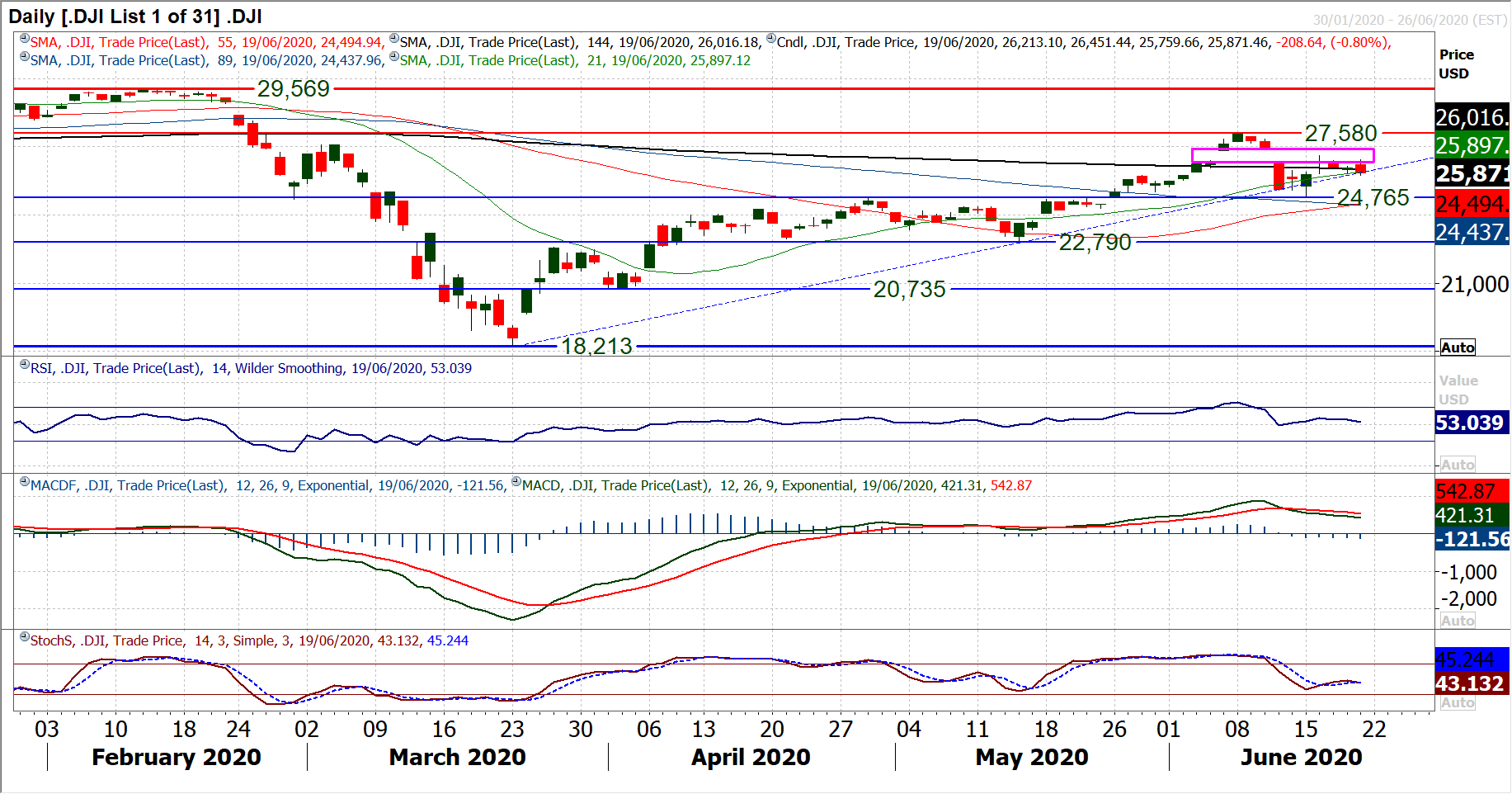