Major markets are seeing a slightly more risk positive outlook for the new trading week, although it is only really in the equities space where the impact is being truly felt. Futures in the US are breaking to all-time highs today. The dollar rally on pause today is helping this, even if forex majors look a little tentative in a risk rally, whilst bond yields are all but flat.  In the US, the FDA authorising a treatment for COVID patients is seen as encouraging. Asian markets held a positive bias overnight, whilst US futures are pushing to record highs this morning in the US. There is a sense of stability in the forex majors today, where the dollar rebound that was a feature of the latter part of last week is settling down. The short covering dollar rally that set in following the FOMC minutes last week, is on pause for now. Traders will be spending the next few days weighing up their options ahead of a key note speech by Fed chair Powell at the Jackson Hole economic symposium on Thursday. 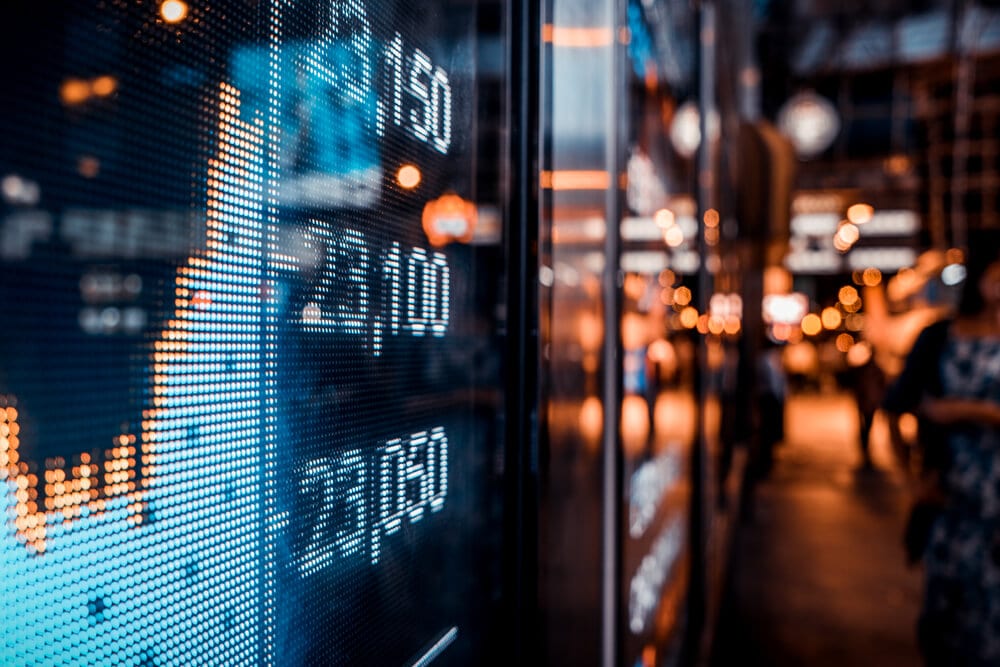 Wall Street closed higher, with the S&P 500 +0.3% at an all time high on Friday. Futures have pushed on this morning, with the E-mini S&Ps over 3400 and +0.4%. This has helped a mild positive in Asia, with the Nikkei +0.3% and Shanghai Composite +0.2%. European markets are also positively biased into the cash open, with FTSE futures +0.8% and DAX futures +0.9%. In forex, there is a risk positive bias, with GBP and AUD outperformers, whilst JPY and USD are slipping slightly and NZD is the main underperformer (albeit mildly). In commodities, risk positive means gold and silver lower for now, with the legacy of recent slips still weighing. Oil is slightly higher.

There is no key data of note on the economic calendar today.

With volatility ramping up in recent sessions across major forex pairs, the potential for a key breakdown on the Kiwi has taken hold. The support at 0.6500 was a July low which was effectively a pivot from a basis of resistance in June. However, as the market has shied away from 0.6715 in the past few weeks, the recovery momentum has been lost and pressure has grown back on 0.6500 again. Forming a run of lower highs and lower lows, the support at 0.6500 has become increasingly important. Tested last Thursday, it held into the close, but if the Kiwi were to close below 0.6500 it would be a seven week low and mark a key technical shift in outlook, one which would also complete a reversal top pattern (arguably a head and shoulders top). The deterioration in momentum indicators already threatens the breakdown, with MACD at 10 week lows, whilst RSI is already leading the market lower. A closing breach of 0.6500 would complete a -215 pip top pattern and certainly imply a test of the key June higher low at 0.6370 in the coming weeks. The rebound to 0.6650 (last week’s high) is now a key resistance now and any bull failure under 0.6600 area will increase the negative pressure now. 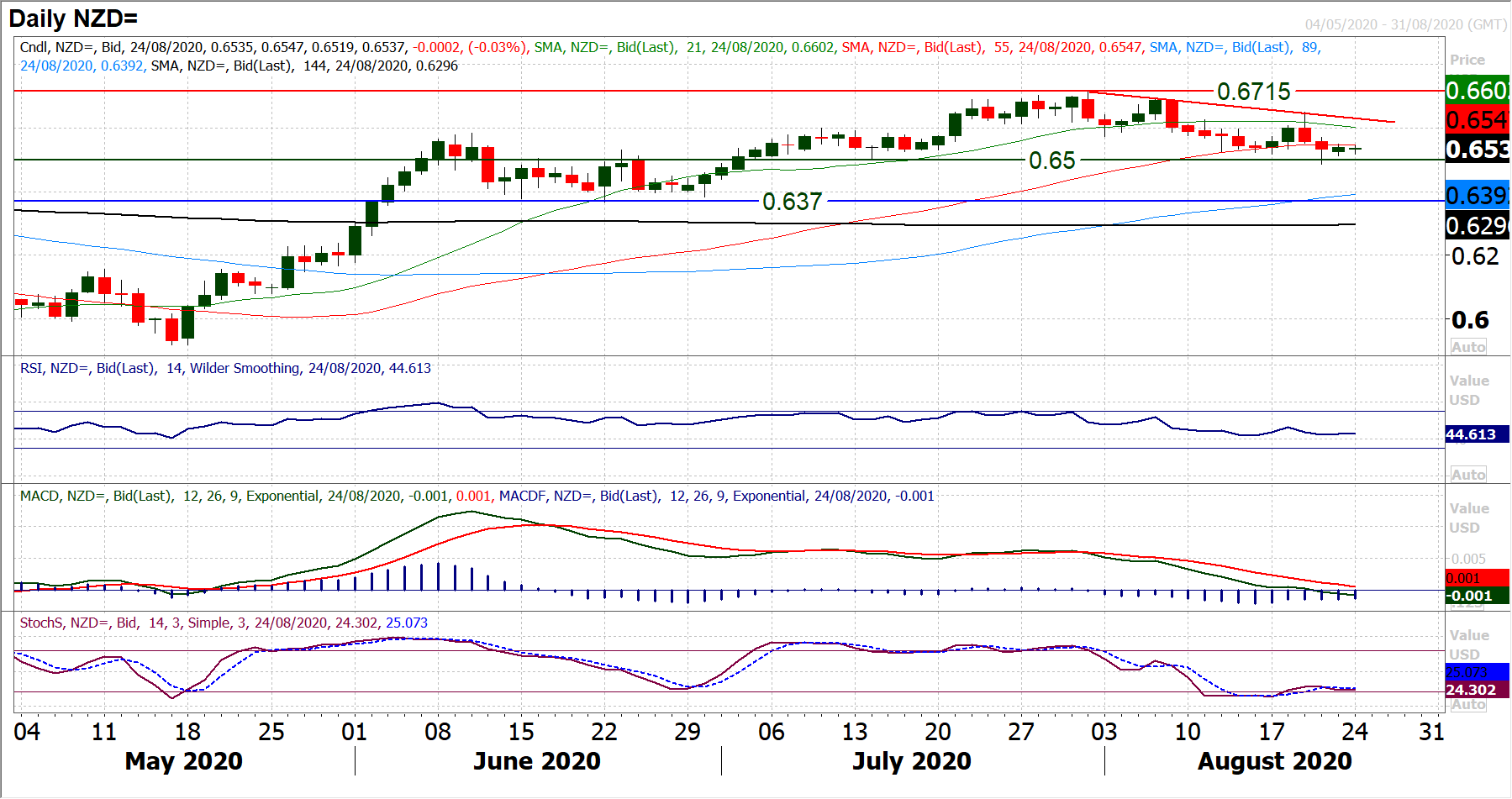 The dollar has engaged in a rather sizeable short covering rally in recent sessions. Currently there is little real damage done to the positive EUR/USD outlook, but the bulls need to be on alert. The failure at 1.1965 has left key resistance and been followed by a couple of decisive negative candles towards the end of last week. The near term move remains negative into the new week. Breaking under 1.1800 leaves a negative bias still, as this was a basis of an old mid-range pivot previously and still acts as a gauge of sentiment. Given the corrective momentum that has formed in recent days, the bulls will be looking to pull the market back above 1.1800 initially today. Beyond that, if this corrective drift is to be shifted, then the bulls need to break this sequence by moving above 1.1880 (to break the lower high form Friday). Momentum is drifting lower and reflecting the near term price move, with MACD and Stochastics falling, but RSI remains fairly stable in the mid-50s. The big move would be a close under 1.1695, but for now, we are still looking for this move to build the next line of support above 1.1695 and to be used as another chance to buy in due course. 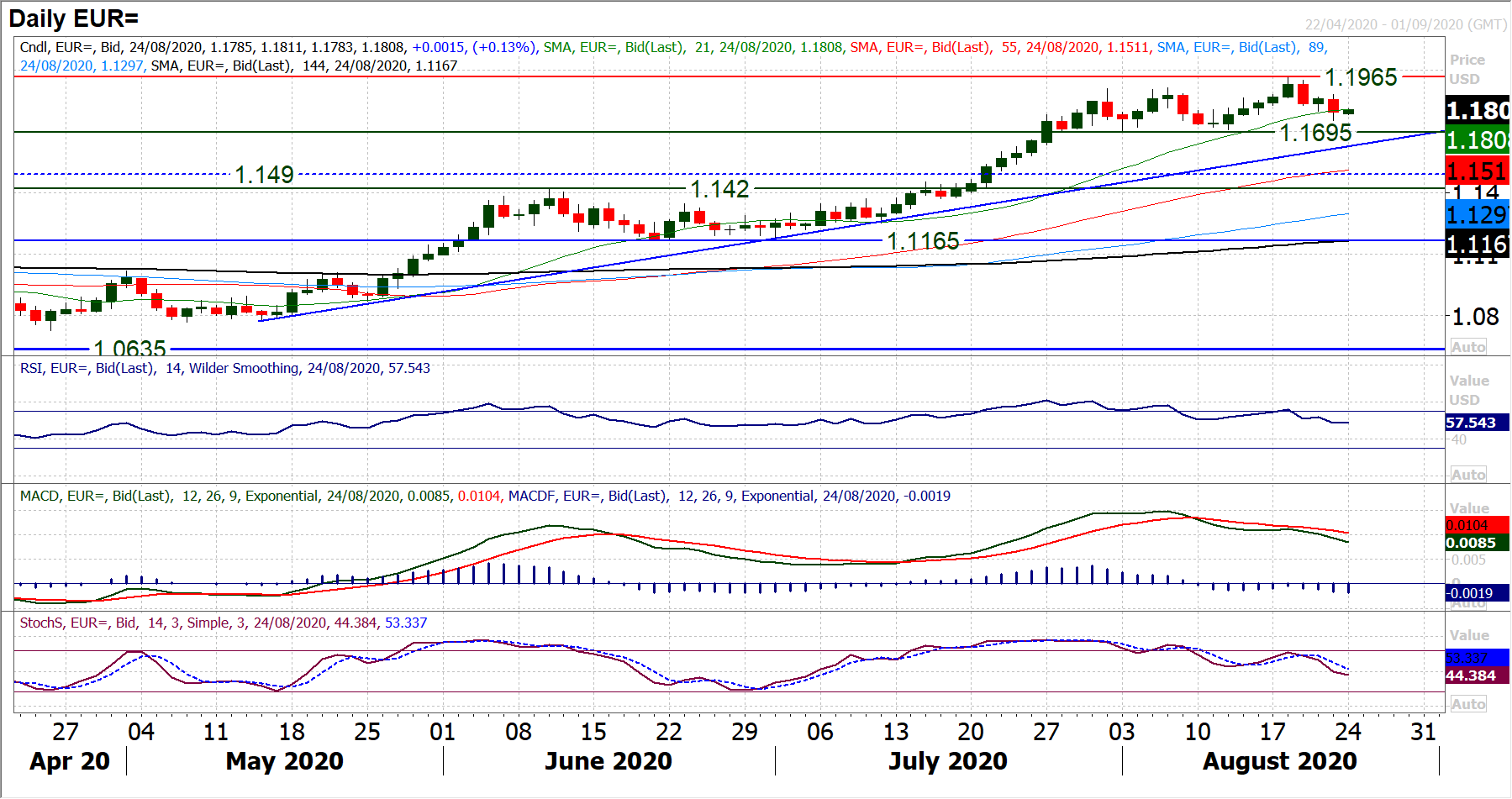 Cable has been swinging wildly around in the past week. A run of four incredible candlesticks, closing either higher or lower by over 150 pips leaves the market almost exactly where it was almost a week ago. However, the bulls will be still fairly happy that the key support band 1.2980/1.3000 of the August lows remains intact and he market is trading above all the moving averages. Although not a true trend line yet (needs three points of contact) there is a gauge of support from an eight week trend coming in around 1.2990 today which adds further importance to the 1.2980/1.3000 support area. Cable is again looking to form support around 1.3055/1.3060 today (as it has done in the last two sessions) and the bulls will be looking to hold a position back above 1.3120 which has previously acted as a gauge of improving outlook. Momentum indicators are less positive on the daily chart than they have been previously, but for now reflect a near term unwind that should still be seen as a potential opportunity. The hourly chart is a little more choppy and the dust needs to settle before making a call of more conviction. A close below 1.2980 would signal a key shift that this move is something more corrective. 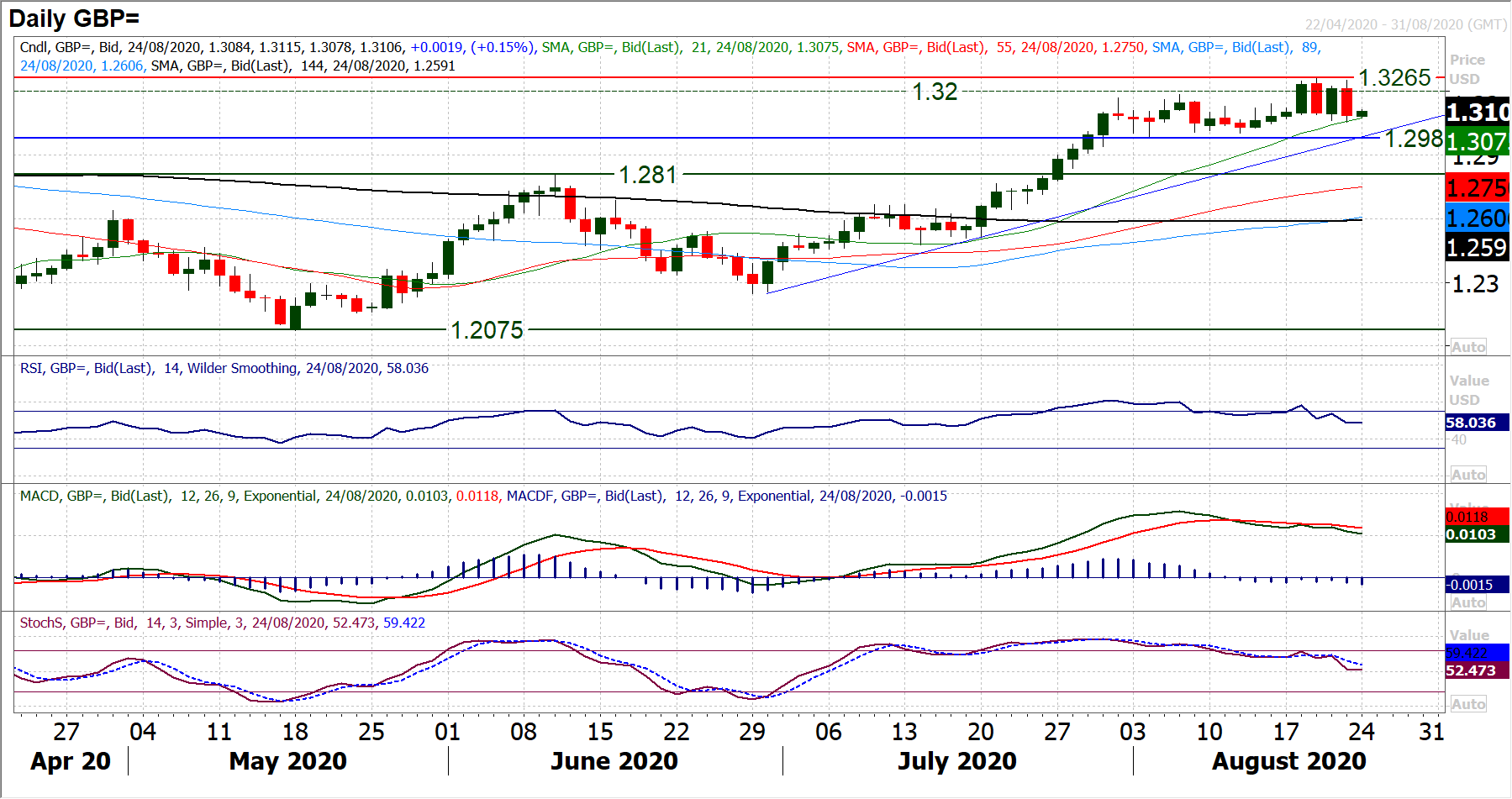 The dollar bulls have not given up yet. Like one of those horror movies, just when you think they are dead, they spring back to life for another go. This played out as a rally mid last week, only to see another bull failure once more in the growing band of key resistance 106/107. The previous August high around 107 now is joined by the lower high of 106.20. Momentum indicators rolling over show the faltering August rally, with the RSI again struggling under 50, whilst MACD lines struggle under neutral and Stochastics also falling back. Friday’s doji candlestick leaves an uncertain feel coming into the new week, however, the over-riding feeling remains one that Dollar/Yen is still a sell into near term strength. With continued failure under 106.20 we favour downside pressure on 105.40 initially (Friday’s low) before a retest of last week’s low at 105.10. A decisive breach would then re-open 104.17 which should also not be ruled out in the coming weeks. 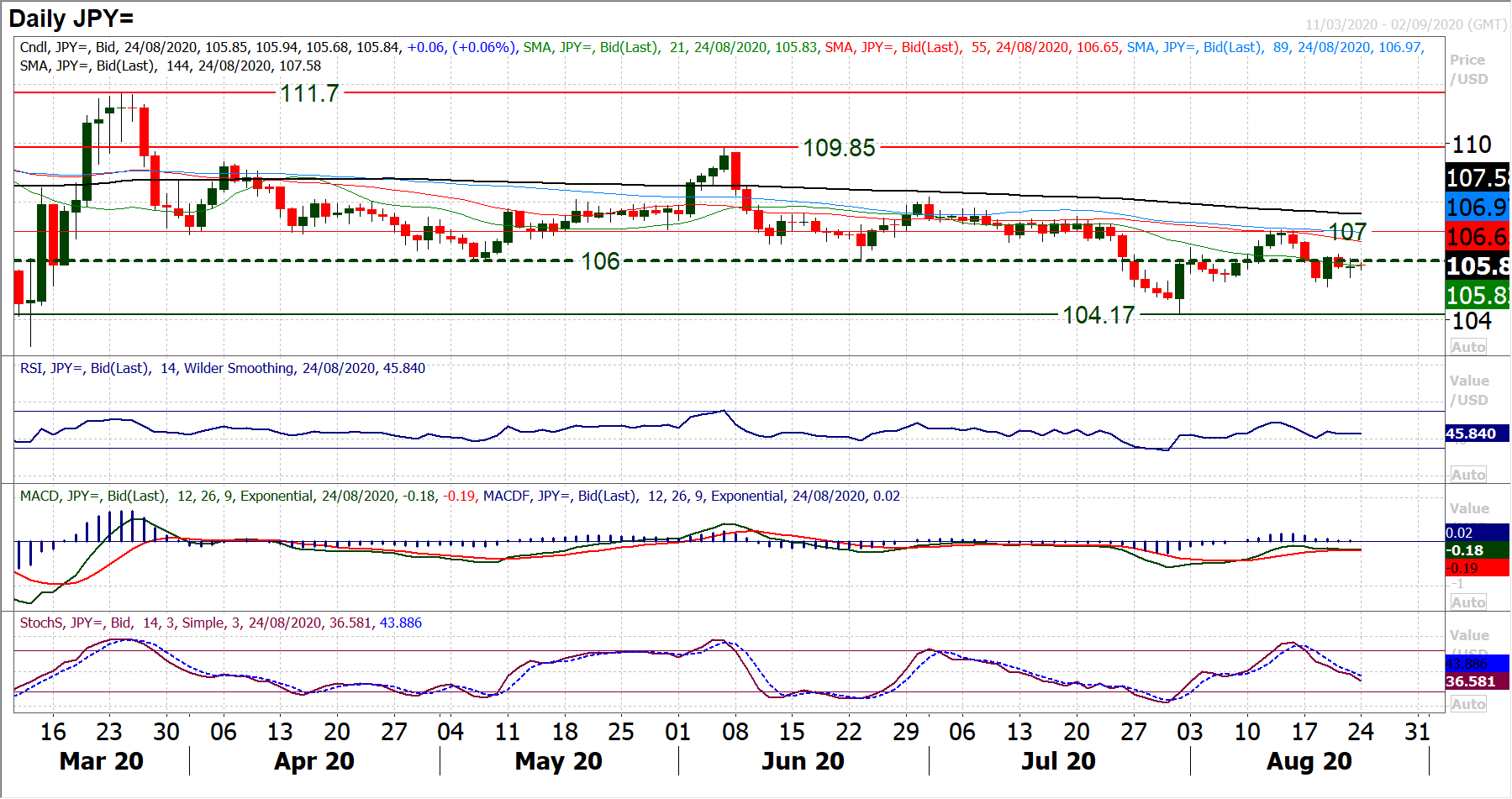 The legacy of the sharp dollar short covering rally in the wake of the FOMC minutes that hauled gold lower, is still hanging over into the new trading week. A couple of mixed daily candles into Friday’s close now means that gold has now closed lower for two consecutive weeks. It leaves the near to medium term outlook somewhat mixed now amidst a variety of technical signals to sift though. The bull trend of the past 11 weeks remains intact (in around $1897 today, whilst the unwind is also settling around 23.6% Fibonacci retracement of the $1451/$2072 big bull run around $1926. The unwinding MACD lines reflect the roll over from the all time high still, whilst RSI and Stochastics are looking more settled. We continue to believe that this weakness of the past two weeks represents a medium term buying opportunity, but the bulls are currently slipping in their grip on the market. It is causing the near term moves lower which may not be enough to decisively change the outlook, but means that buying with conviction is still not there yet. The market has only closed once below the 23.6% Fib ($1926) and the longer this continues, the more confidence will grow. Friday’s low at $1911 is further support above the 11 week trend line. A close back above Friday’s high of $1955 will again improve confidence, but for the bulls to flourish again, $2015 (the lower key high) needs to be broken. 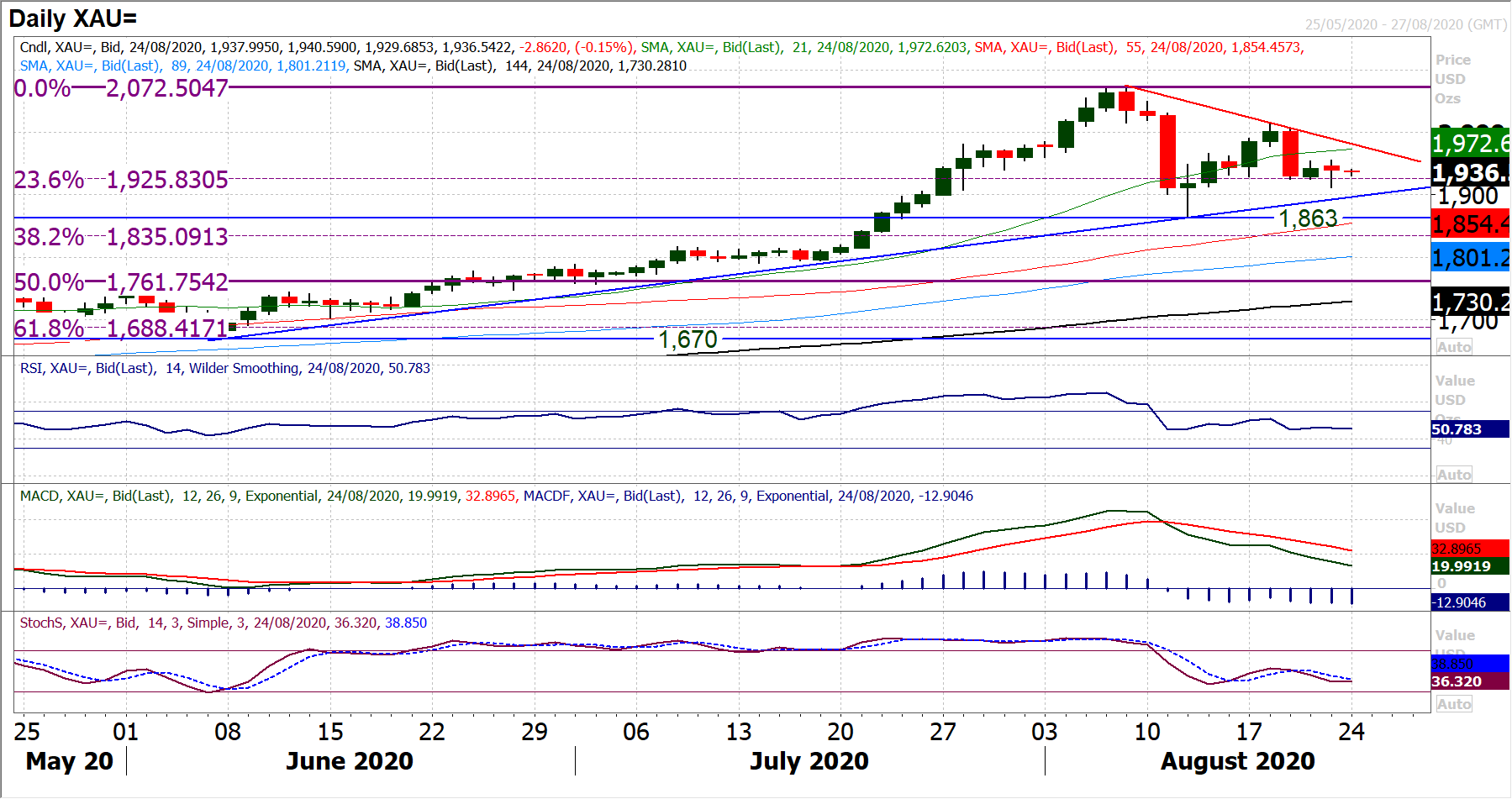 As the recovery in oil has developed over recent months, the acceleration of the rebound has slowed. Periods of calm consolidation have been interjected with mild corrective moves. Each time though, the weakness has been bought into and the consolidation has eventually ended with a break to the upside. So with the market just rolling over in the past few sessions, the usual tendency has been for this move to be bought into. The opportunities tend to arise around the 21 day moving average which has been a good basis of support over the course of the recovery. It would appear that the market is again at an important juncture. It comes with RSI unwound towards 50, which is typically an opportunity in the past few months. However, MACD and Stochastics are falling away quite sharply this time and the bulls need to respond to a move below the 21 day ma (around $43.05 today). There is breakout support around $43.90/$44.25 too. A closing breach of $43.90 would be a warning that the bulls are losing their control and could see a move back towards the important $41.30 key higher low support. Resistance is at $45.10/$45.50 to fully re-engage the bulls. 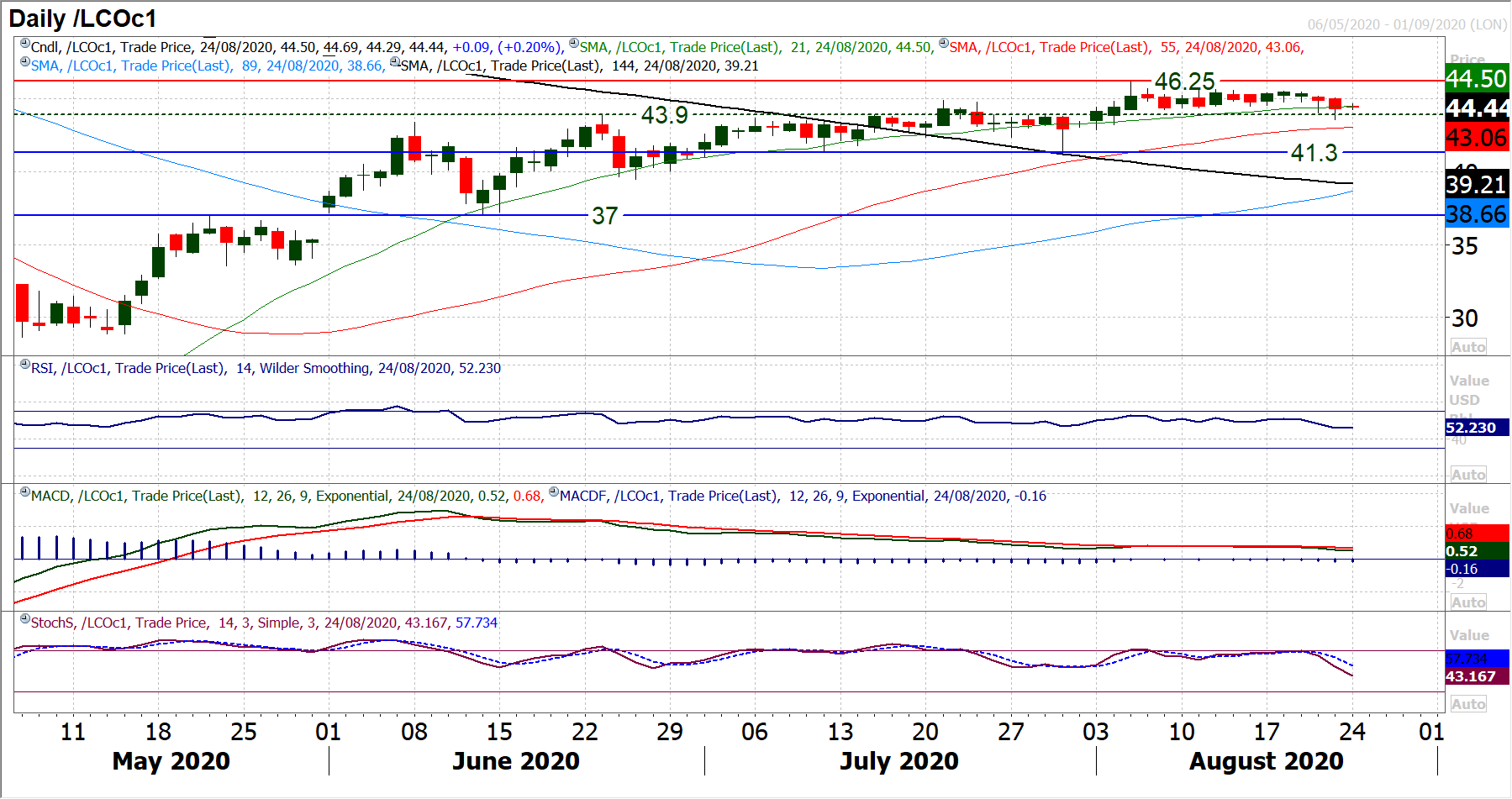 After over a week of consolidation drift back, the bulls had a positive move into the close on Friday to leave them in the driving seat for the new week. Picking up off 27,525 on Thursday, helps to bolster the old key June high of 27,580 as a basis of support and a band of key initial support 27,525/27,580 this week. As the support of a four month uptrend rises at 27,000 today, the importance of 27,070/27,580 as a “buy zone” to catch near term corrections is gaining technical strength. With two solid positive closes in the last two sessions and futures pointing to a solid positive open today, the bulls will be eyeing initially the recovery high of 28,155 as an initial test. Beyond that comes the potential for closing the key February bear gap at 28,400/28,895. We continue to look to buy into weakness with momentum indicators still strong but also with upside potential following the recent consolidation. 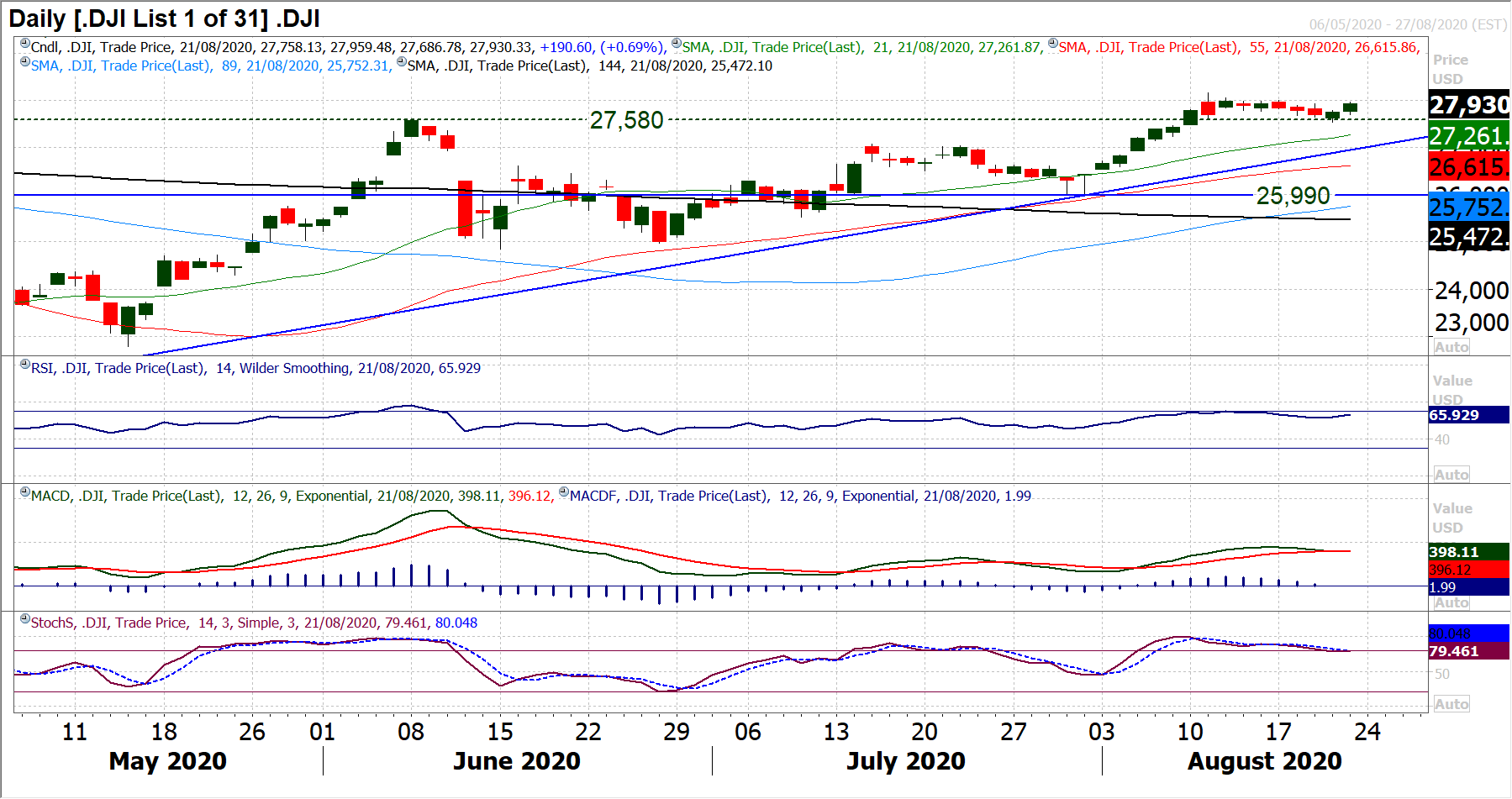 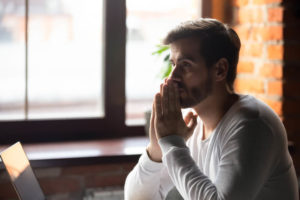 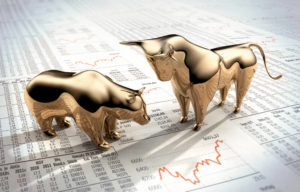