In isolation, the US economy adding +4.8m jobs (which is a record number) sounds incredible. However, this comes amidst the backdrop of employment levels still being around -15m jobs lower than it was back in February. This “positive” data came on a day where record numbers of COVID-19 infections were reported (around 54,000) and where weekly jobless numbers continues to come in higher than expected. With 12 states pulling back from their re-opening procedures, there is a real concern than July could now be a month were the positive data of June is undone. So, the risk positive reaction of the payrolls report yesterday may not last long. Treasury yields ended the day lower and although Wall Street closed higher, it was way below session highs. The perception could be that the good news of the recovery may now be past its peak, or at least for this phase of the recovery. The US is on public holiday for Independence Day today, we will begin to get a clearer picture of the broad outlook of this next week. Today could be a bit of a non-event, but focus will be on services PMIs. A bounce to 45.0 in Japan does not shoot the lights out, but China Caixin Services PMI at 58.4 is a positive and has allowed European equities to come in with a marginal positive bias. Final Eurozone and UK PMIs could give more of a steer to the session, but we do not anticipate too much action today. 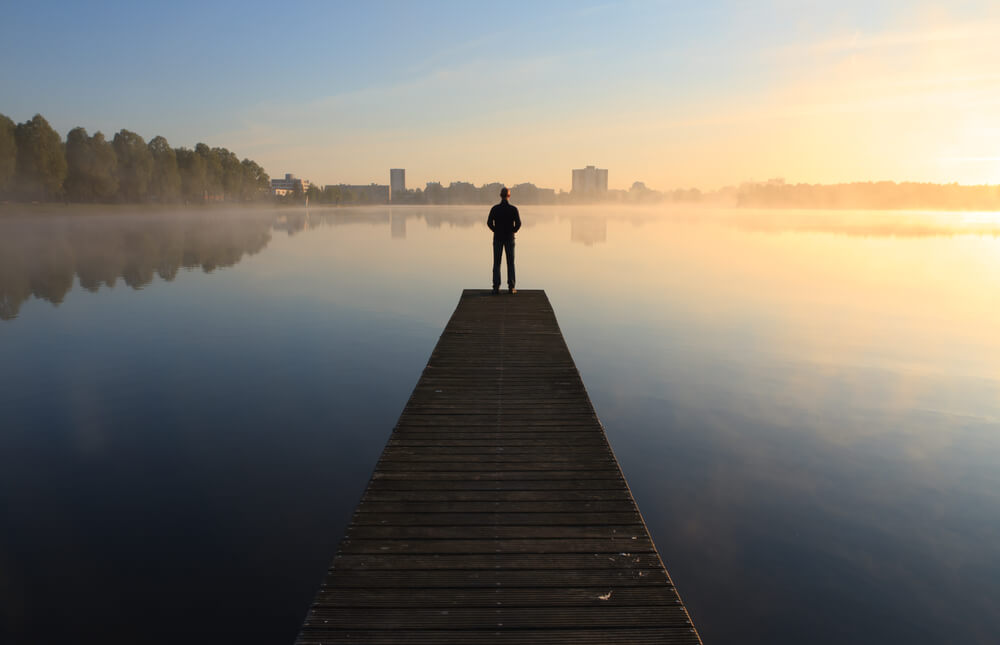 Wall Street closed mildly higher, with the S&P 500 +0.5% higher at 3130. US markets are closed today, so no steer from futures. Asian markets were positive with the Nikkei +0.7% and Shanghai Composite +1.6%. European indices are also looking mildly positive with FTSE futures and DAX futures +0.3%. In forex, there is little real steer (without US bond markets open), but AUD and NZD higher suggests a mild risk positive bias. In commodities, gold is holding ground again, whilst silver is around half a percent higher, whilst oil is just under one percent lower.

The sterling rally of recent sessions has unwound a strong breakout on EUR/GBP back to a key level of support at £0.9000. This is a key crossroads in the outlook, however we expect this move will be seen as another opportunity to buy the currency cross once more. The breakout through £0.9000/£0.9055 resistance was a key move last week, and the bulls will be looking for the underlying demand of this old resistance to become the basis of support for the next keg higher. The support of a near two month uptrend rises at £0.8995 today, which coincides with the pivot support at £0.9000. With the magnitude of the negative candles of the corrective move now dissipating, it suggests that the market sees this as a key inflection point. It will be an interesting session to see if the euro now begins to regain positive momentum once more. Daily momentum indicators have swung lower in recent sessions, but with little real conviction on the MACD lines, the RSI is settling around the 50 mark again. This is a move that has just unwound the bullish momentum of the previous bull run. Hourly chart indicators show the momentum is beginning to build positively once more and the bulls will look to move above £0.9030 as an early indication of renewed buying taking hold. Above £0.9055 would confirm upside pressure developing. The bulls would be disappointed if £0.9000 is consistently breached now, with £0.8950/£0.8970 being the next band of support. Under £0.8910 would be a decisive breakdown of the bullish outlook. 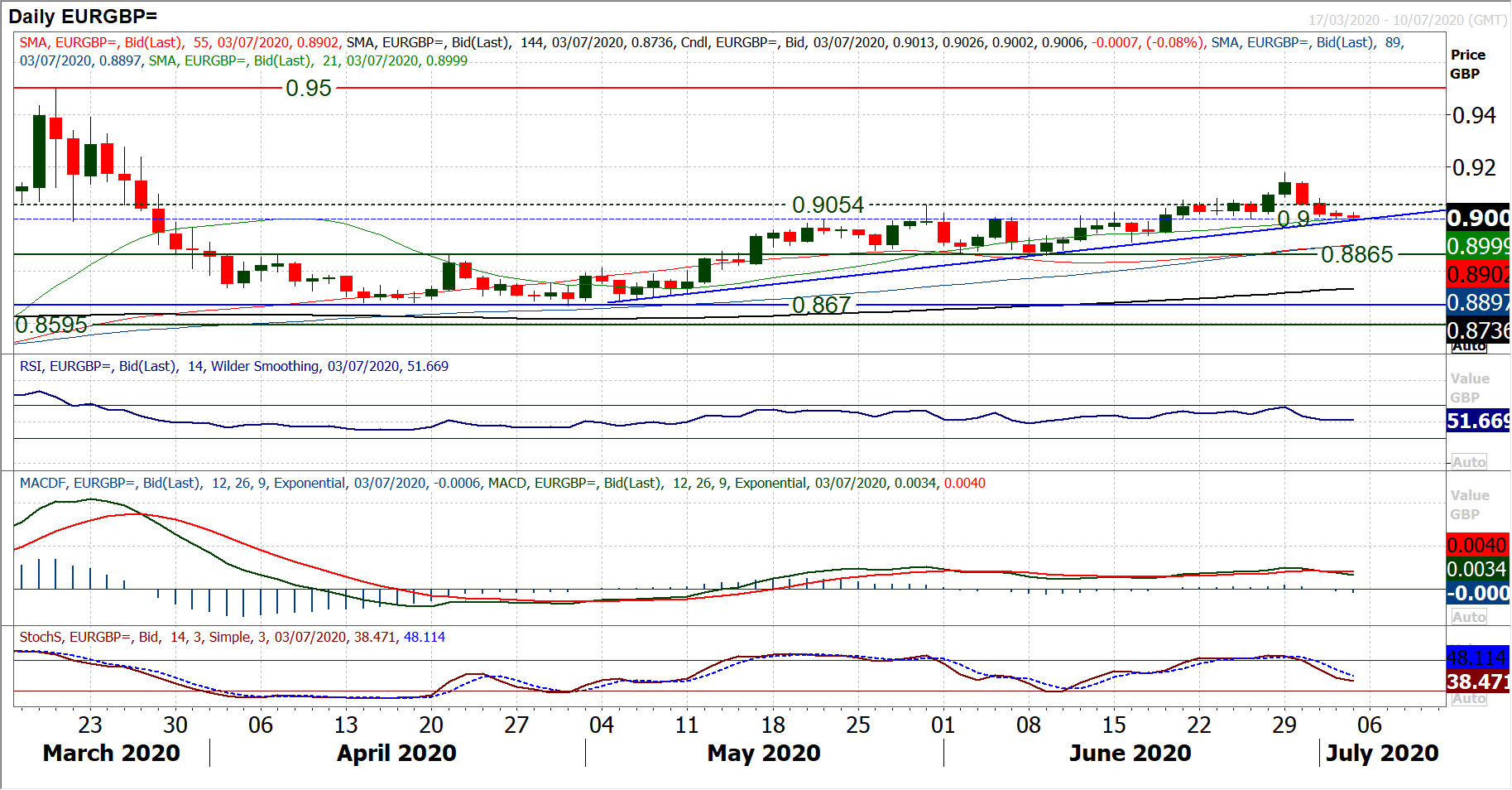 Another small bodied daily candlestick suggests that it is still too early for the bulls to get excited on EUR/USD. The payrolls report eventually weighed on the pair, and once more it left a candlestick with a lot of bluster (long shadows) but little real conviction (small difference between open and close). Subsequently, as the dust settles we continue to see EUR/USD ranging. With today being a US public holiday, this outlook is unlikely to change much coming into the weekend (aside from perhaps some initial chop around the Eurozone PMIs). Taking a step back, the euro continues to find buyers around the range lows between $1.1165 and $1.1200 area. However, for the past few weeks now, the weight of sellers bares down on the market between $1.1300/$1.1350. Momentum indicators are flattening off, with the daily RSI still holding firm above 50, whilst Stochastics have also lost their negative impetus. There have now been five closing candles in a row which have lacked conviction, so this is a market looking for direction. 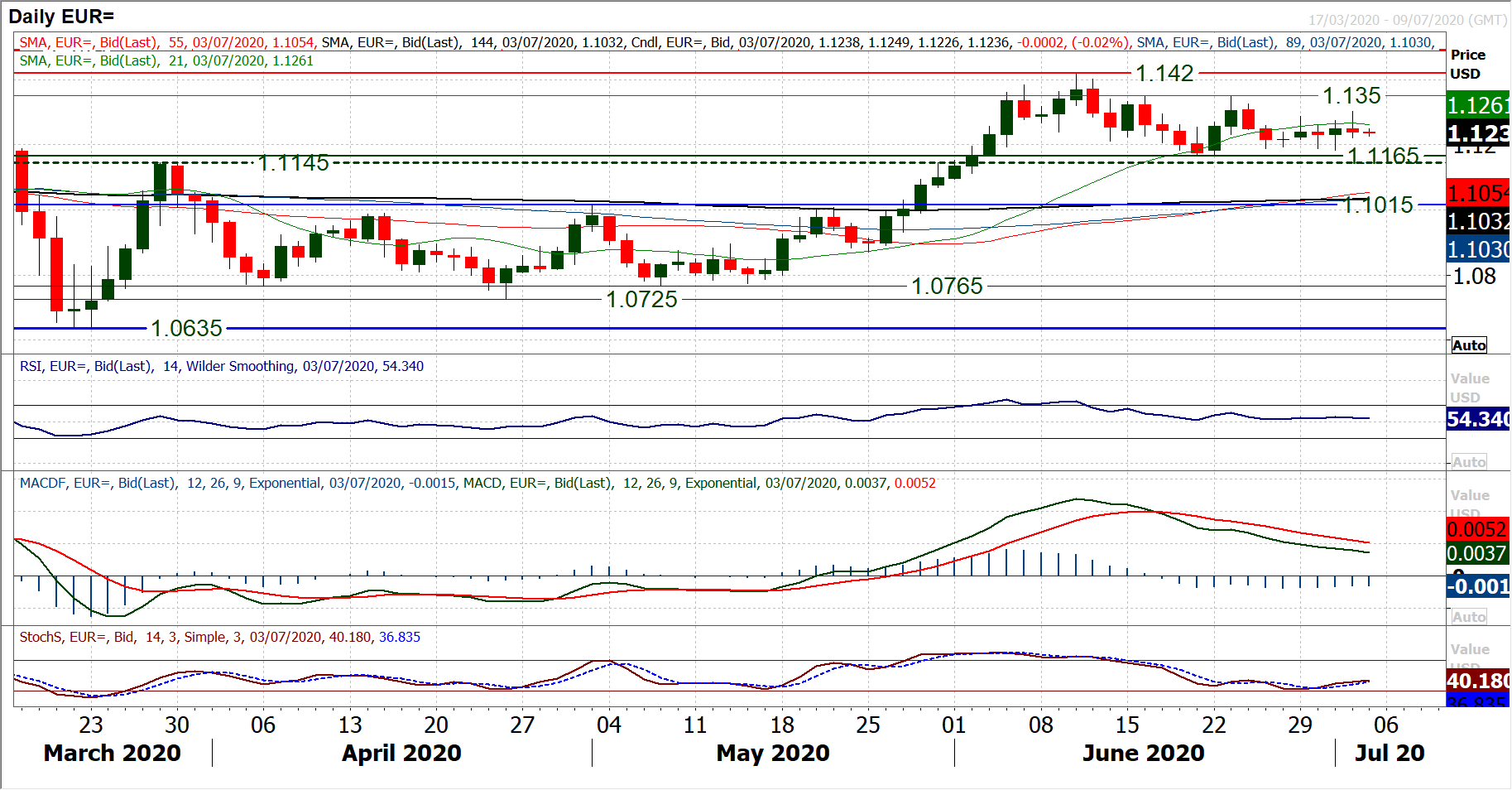 Breaking a three week corrective downtrend has the potential to be a bull move for Cable, but this will require a breach of a lower high to really shift the technical emphasis. However, for now, this is yet to be seen. The strong payrolls report has restricted Cable’s recovery and the fact that the resistance at $1.2540 remains intact could prove to be an important near term development. Losing over 60 pips into the close, will be a disappointment for the bulls, and bolsters resistance now $1.2530/$1.2540. It comes as daily RSI again begins to falter around the 50 mark (which effectively retains a near term negative bias). Without US traders, today, this could be a muted session for Cable. However, the hourly chart shows a support around $1.2450 which the bulls will be keen to defend, whilst below $1.2400 again would suggest that a more corrective bias was once more taking control. 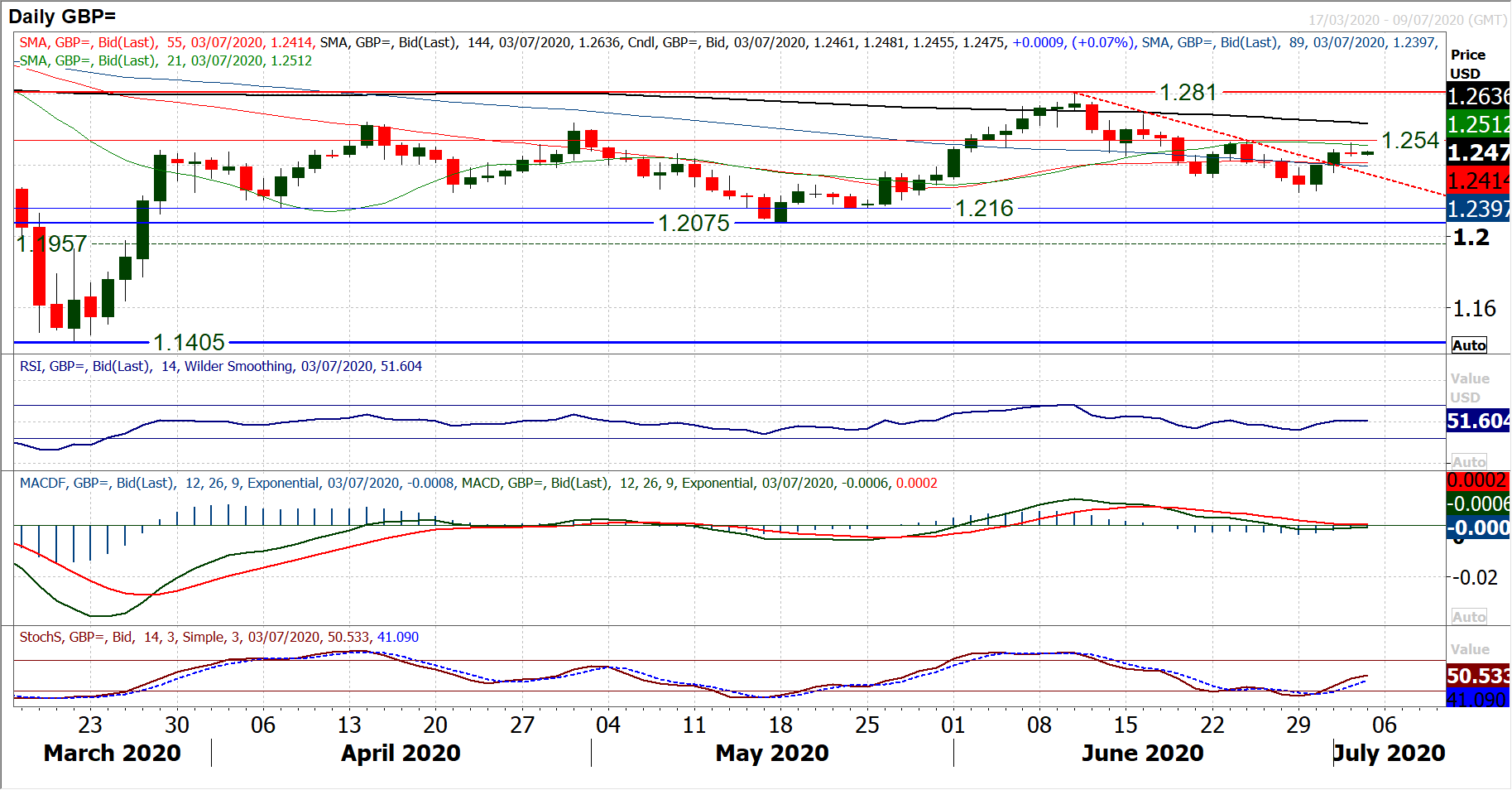 Even in the wake of an apparently strong Nonfarm Payrolls report (which was risk positive but eventually enable a USD rebound), there was still limited real move on Dollar/Yen yesterday. Wednesday’s correction and bearish engulfing candlestick is still a key near term influence on the outlook, leaving resistance at 108.15 now. However, the selling pressure does not appear to be taking hold as the market consolidates for the US public holiday (no Treasury markets tends to mean little direction on Dollar/Yen). With Stochastics swinging lower in the wake of Tuesday’s decline, there is a neutral look to momentum now, as RSI hovers around 50 and MACD lines drift towards neutral. Below 107.30 support would begin to generate a negative near term bias once more. However, given the market is now effectively in the middle of the 106.00/109.85 medium term consolidation range. 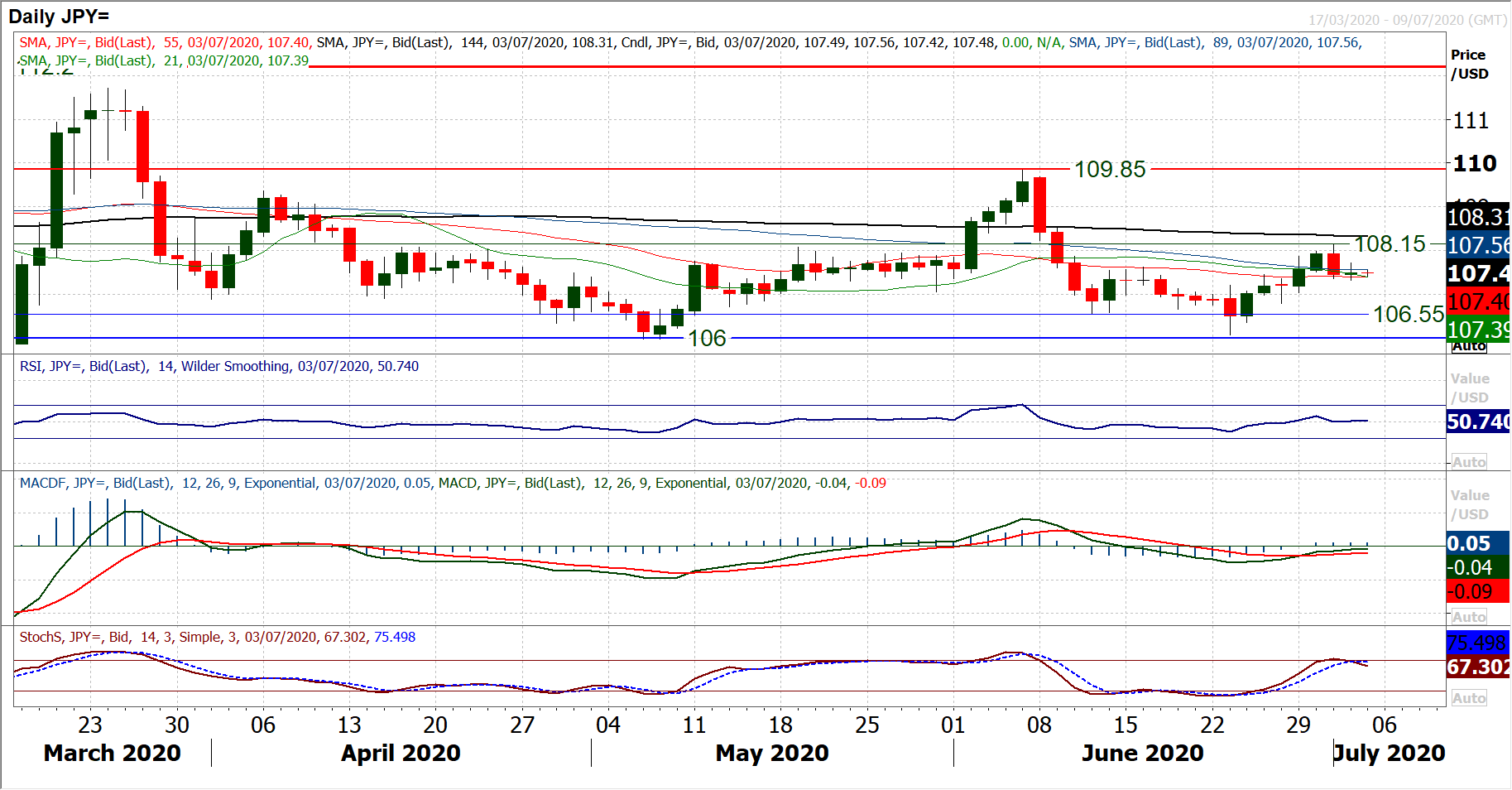 On a session where the reaction was broadly risk positive and (eventually USD supportive) in the wake of the payrolls report, gold closing decisively higher and with a positive candlestick, is encouraging for the bulls. The concern has been that the pullback from $1789 was another bull failure to scupper the breakout once more. However, aside from a brief intraday slip to $1756 (in the minutes following the payrolls announcement), gold held firm above the old May high of $1764 and began to pull higher once more. This is a good response from the market, which has now closed for five consecutive sessions above $1764. The four week uptrend has been tested (for a few minutes) but essentially holds intact still. Momentum indicators retain their positive configuration, albeit slightly less positive than a few days ago. Daily RSI is still above 60, whilst Stochastics are above 80. The US public holiday today is likely to mean little real conviction from today’s session and with the uptrend at $1769 today, this may even be breached. However, whilst gold continues to hold above $1764 we are still encouraged for the outlook of further upside to test $1795. The inference of the breakout above $1764 is still an implied target of $1820. We would lose our conviction below $1744. 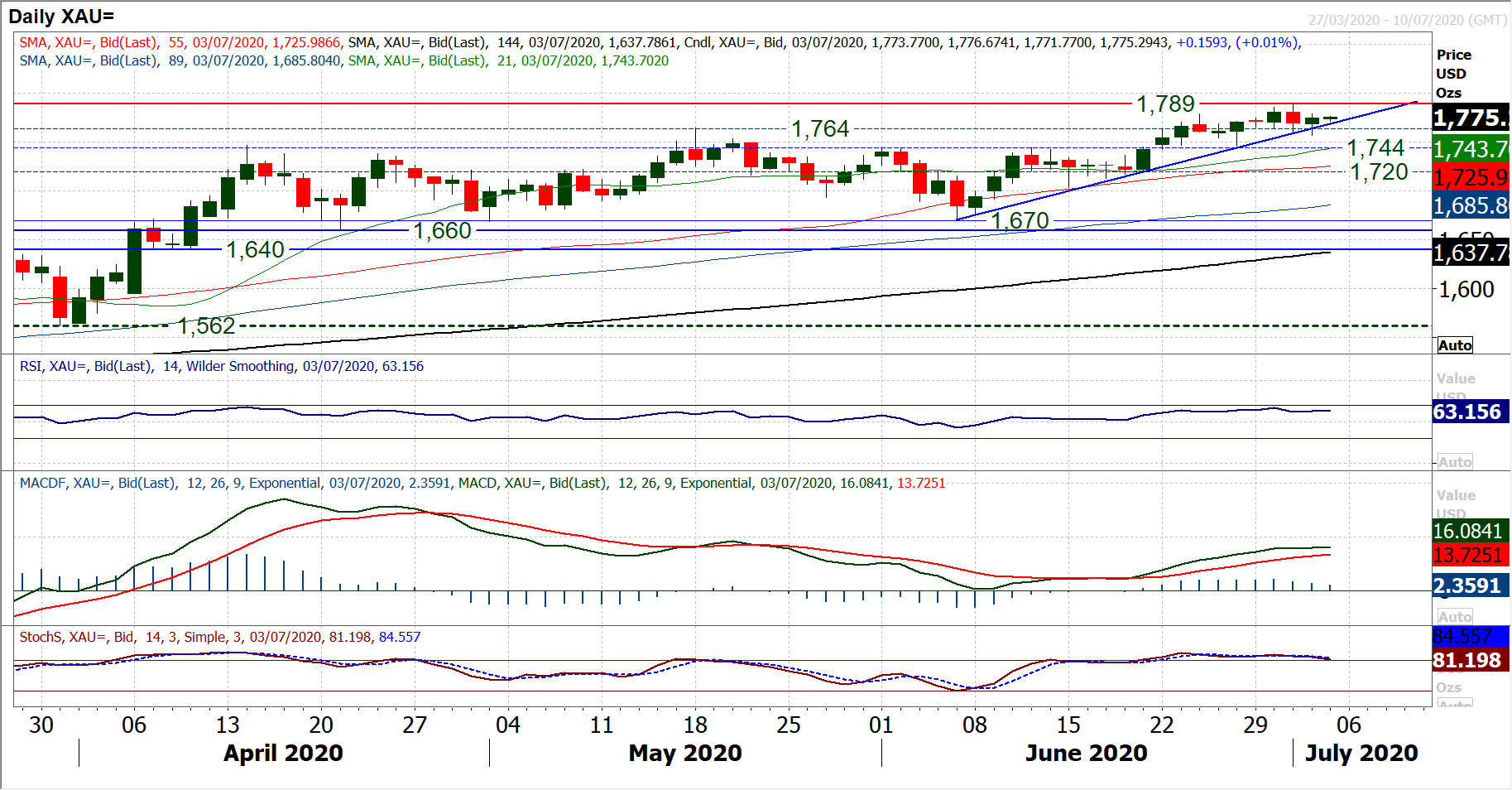 The first decisively positive session for almost two weeks looks to reinject some new life into what has been a tired looking recovery of late. The test now becomes the key June rally high of $43.95 which is preventing a move to finally close the huge gap down from March at $45.20. With US markets shut today, there is a sense of “wait and see” to the moves early today, but there has been a consistent move to buy into weakness over the past week. The support of a (recently redrawn) seven week uptrend comes in at $41.30 today. We do though watch with interest, how the momentum indicators develop now, as negative divergences are still a threat to the longevity of the rally. Should this morning’s slip turn into something more pronounced, there is a risk of another lower high across all RSI, Stochastics and MACD. It will likely be next week where we find out more of this development. For today, initial resistance is around $43.25, with $41.75/$42.10 supportive. 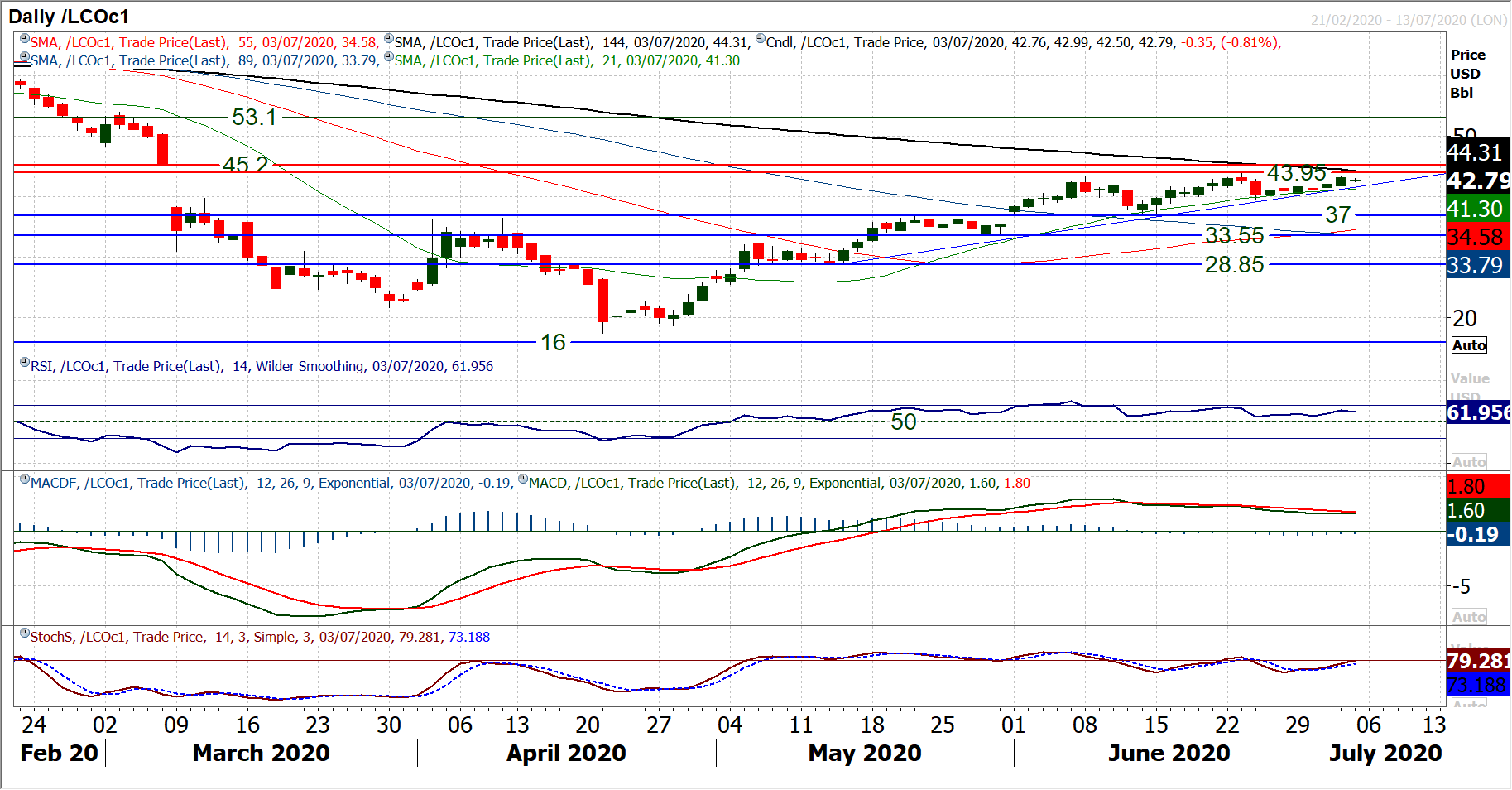 The last two sessions on for the Dow paint a slightly nervous picture moving into next week. Wall Street is shut for Independence Day today, but the candlesticks of Wednesday and Thursday suggest concerns mounting. A negative candle (close below the open and also a close towards the low of the session) in the wake of a record jobs growth in the payrolls report is a worry. Technically, the Dow is still in a near term consolidation range and these candles will do little to suggest there is about to be any breakout. Ranging above the support band 24,765/24,970 and under the resistance band 26,315/26,610.  Daily RSI reflects this too, oscillating for the past three weeks now between 44/56, whilst MACD lines are flattening around neutral. Whilst above the key support 24,765 the medium term recovery still holds true, but the bulls need something to get them going again. 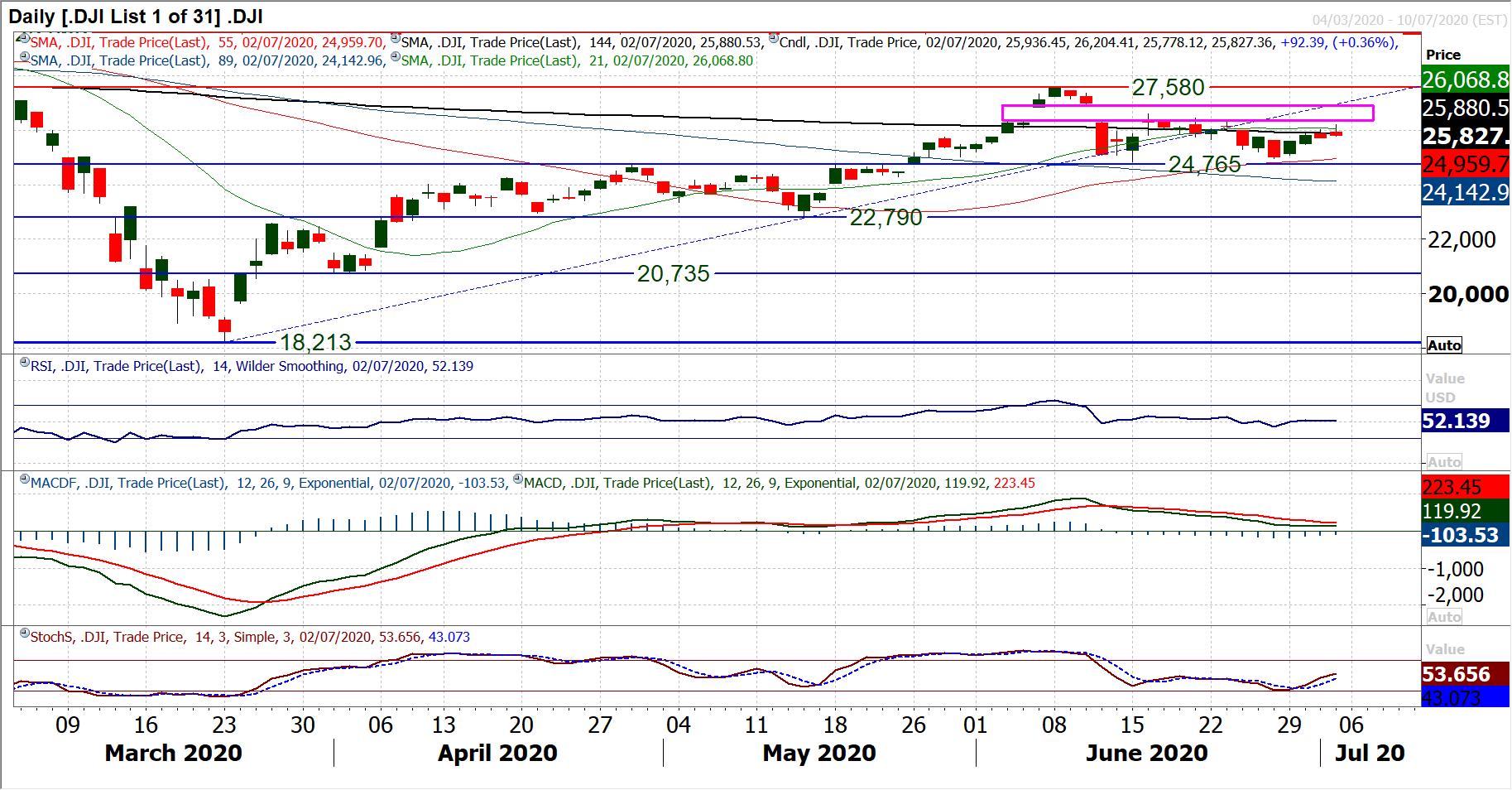