Dollar begins to slip away again, could this be a positive sign for broader risk?

Broad market sentiment remains cautious and will not have been helped by comments from White House trade advisor Peter Navarro last night who suggested that the trade deal with China was “over”. In what must have been a stinging behind the scenes rebuke for Navarro, this prompted him to put out an almost instant clarification comment that his words had been taken “out of context”. It also prompted a tweet from President Trump that the deal was still fully intact. Another instance of an astounding lack of clarity, mixed messaging and professionalism, but ultimately, nothing overly surprising. Markets reacted with a spike into (and then out of) safe haven assets over night. Interestingly though, that aside there are beginning to be some signs that perhaps a shift in positioning is taking place again. Yesterday saw the Dollar Index form a “bearish key one day reversal”, whilst there have been moves out of the yen too this morning. These forex moves may only be minor for now and yet to be confirmed, but could they begin to signal something more positive again? The yen and dollar have been performing much better in the past couple of weeks as the risk rally has corrected. Signs of traders moving away from the dollar and yen could be a sign of improving risk appetite again. For that to be sustainable, the second wave re-infections in the US probably need to be kept under control. The flash PMIs for June will be watched today for signs of improvement in economic prospects as economies continue to move through their re-opening procedures.

Wall Street closed higher last night with the S&P 500 +0.6% at 3118. US futures are beginning the day on a positive note, with E-mini S&Ps +0.2%. This has helped a positive close across Asia, with the Nikkei +0.5% and Shanghai Composite +0.2%. European markets look well set up early too, with FTSE futures +0.5% and DAX futures +0.8%. In forex, there is a risk positive bias, with JPY being a main underperformer, along with an edge of USD weakness too. In commodities, gold is -$5 whilst oil is consolidating its recent gains.

The battle for control of Aussie/Yen could have a wider reaching implications for broader market sentiment. This is why, with the Aussie having been corrective for the past couple of weeks, the bulls need to start the fight back. After a strong bull candle yesterday, this may just now be happening. The unwind of the March to May bull run has already completed a small top pattern that implied a correction towards 72.25, but the support of 72.50 (also an old support area) has held in the past week. The market has approached an interesting crossroads, where support of a three month uptrend (around 72.30) converges with resistance of a two week downtrend (around 73.55 today). Given that we see this move as being a bull market correction (where downside targets are likely to be undershot), and a near term correction will be seen as a chance to buy, it is interesting that the downtrend is being challenged now. Momentum backs the assertion that this is a pullback into support, with the RSI again holding above 50, but also Stochastics threatening to “bull cross”. A breach of this downtrend this morning, suggests the selling pressure is waning and that the bulls are growing in strength once more. Support at 72.50/72.75 is being bolstered. The hourly chart shows improving hourly momentum configuration now and holding a decisive move above 73.90 would be a strong signal for the bulls. Key near term resistance of 74.50/75.05 can then be tested. 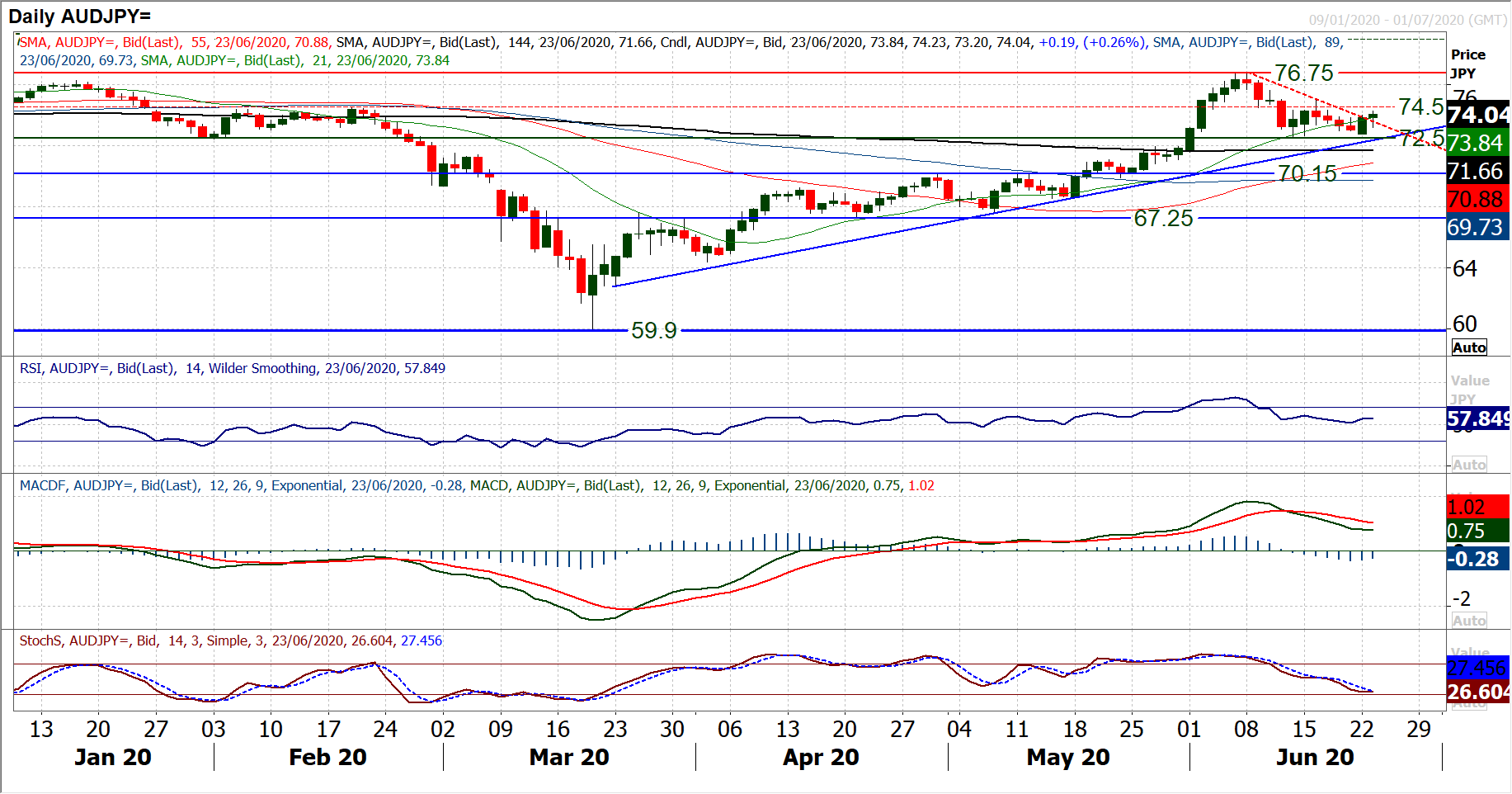 After almost two weeks of corrective drift, we have been looking for signs that this retracement on EUR/USD is being bought into. Is yesterday’s strong positive candle the trigger for a market ready to pull higher once more? On a technical basis, a lot of positives are showing now. The corrective drift has found support at $1.1167, at a five week uptrend which is also just above the breakout support of the March high at $1.1145. Daily momentum indicators look ready. Unwinding a bullish configuration, the RSI has picked up from 50 whilst Stochastics are threatening to bottom out with a bull cross around 30. A little two week downtrend is being breached this morning as the market is consolidating too. There has been no overt buy signal yet though. On the hourly chart, a move above $1.1295 would suggest the bulls are buying into weakness. The hourly chart shows $1.1200/$1.1230 is supportive now and needs to be built from to continue the recovery. 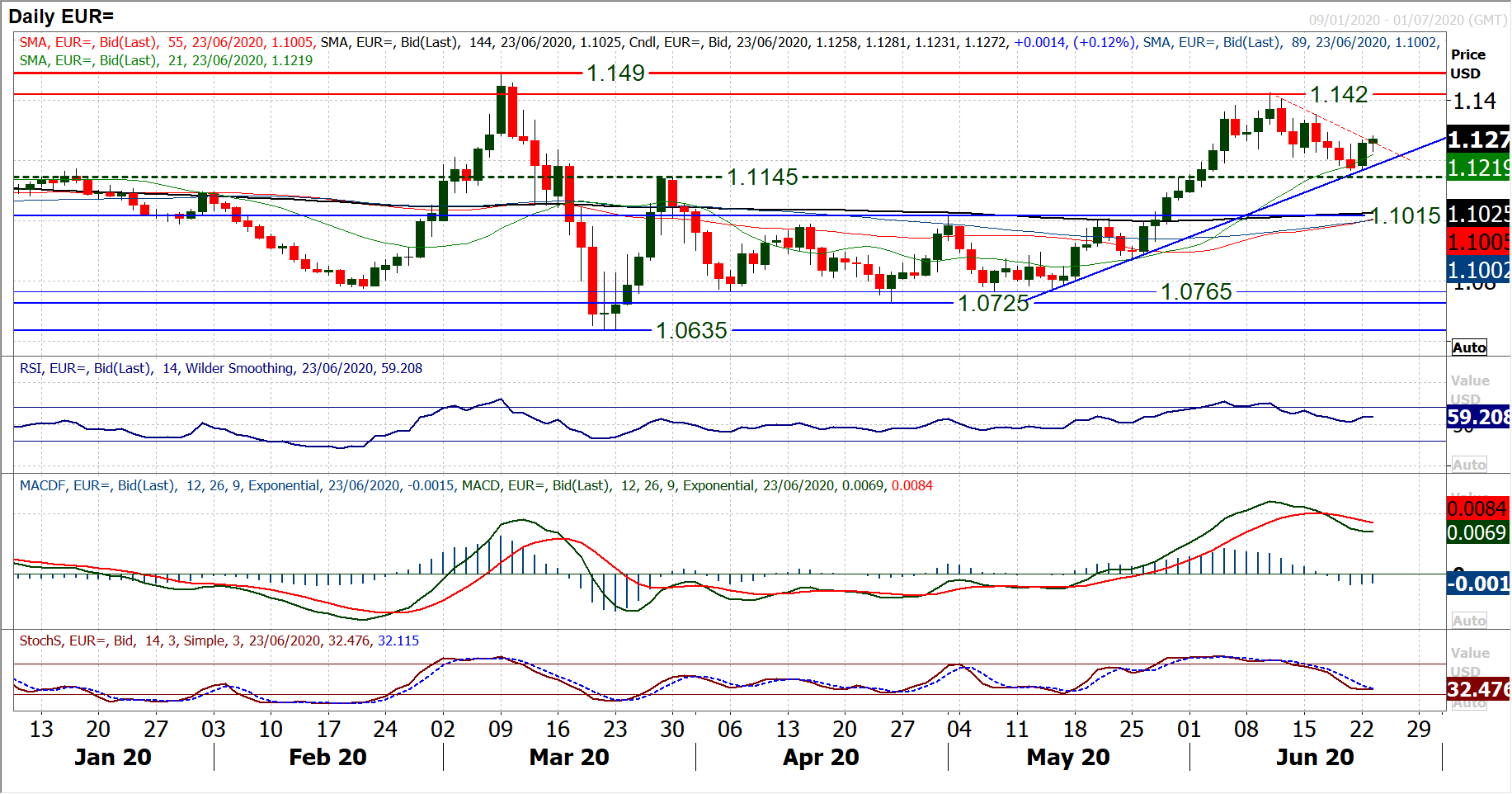 It is interesting to see a rally on Cable has pulled the market back into an area of resistance and what could be an important crossroads. The question for today’s session is one of how the bulls respond in the resistance band $1.2450/$1.2500.  This is an area where there were several lows formed during the first half of June, prior to last week’s breakdown. How the market now reacts around this area of overhead supply will be important for outlook over the coming sessions. It will gauge whether this is an unwind within a downtrend, or something more positive for the bulls. There is a two week downtrend at $1.2530 today also as a barrier which interestingly also coincides around the underside of an old five week uptrend. So this is a key confluence area of resistance now. If the bulls can overcome it, then it will be an encouraging sign of strength. Yesterday’s decisive positive candle needs to be built upon now. It has left a low at $1.2333 and was also a bullish outside day session. A second positive candle would put pressure on the big resistance overhead. Daily momentum indicators are looking less corrective than they were, but need more (RSI needs to be above 50, Stochastics need a bull cross) to suggest the bulls believe in a recovery again. 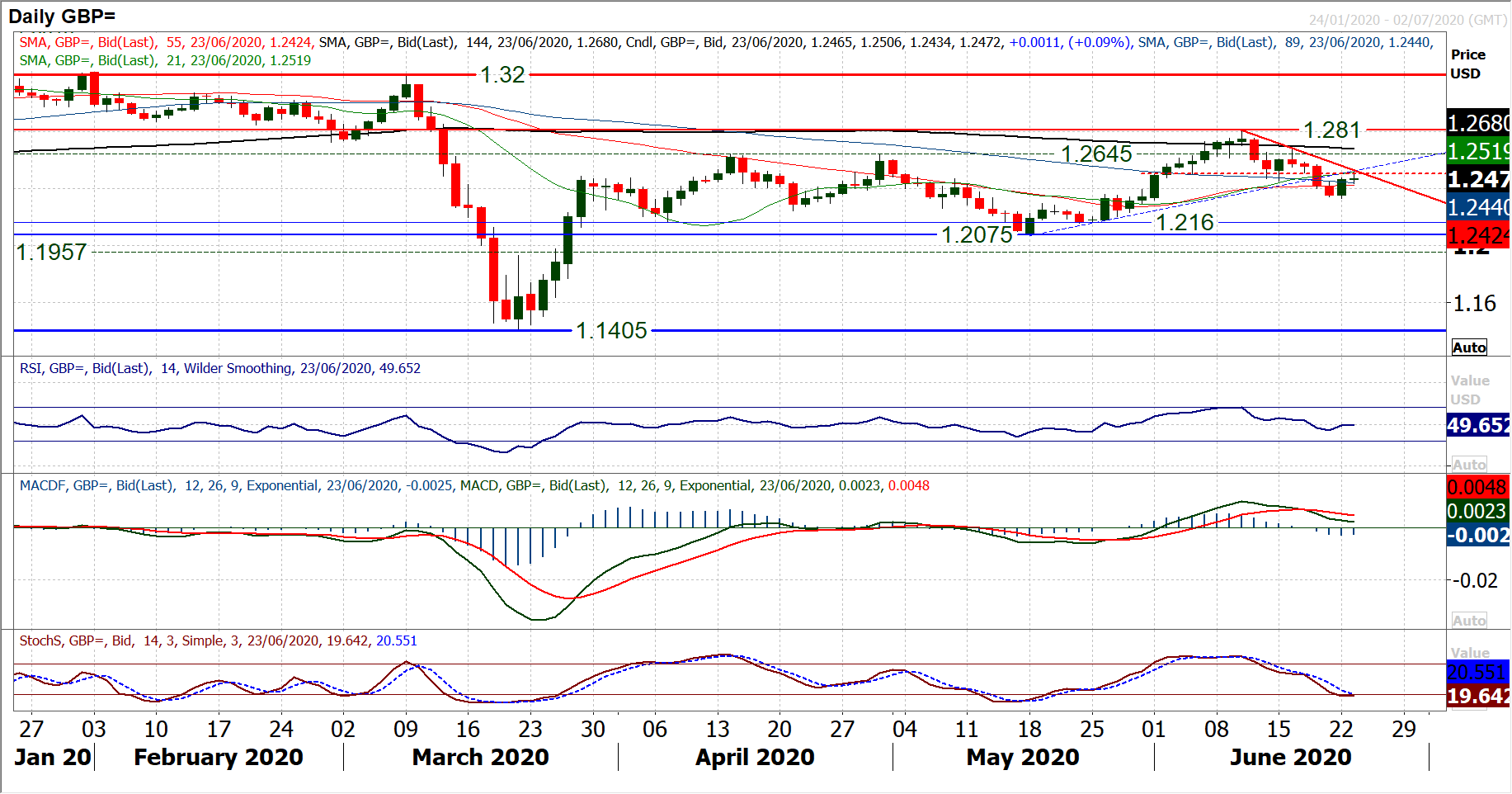 Are there signs of life in Dollar/Yen? It is like getting blood out of a sone sometimes on this pair, but after drifting for the past few days, there is an early swing positive. With the yen under pressure, this is translating to Dollar/Yen pulling higher this morning. The move is leaving support 106.55/106.70 and the bulls will now be eyeing a test of 107.60 resistance. The hourly chart shows show 107.00/107.20 has been a barrier to recovery over the past few sessions and if this can be overcome then a move on 107.60 is certainly possible. Hourly momentum is picking up too. It seems as there is still no intent on dragging Dollar/Yen into the low 106s, but now we will find out if there is an appetite to buy. A move above 107.60 would imply around 108.60 of near term rally. 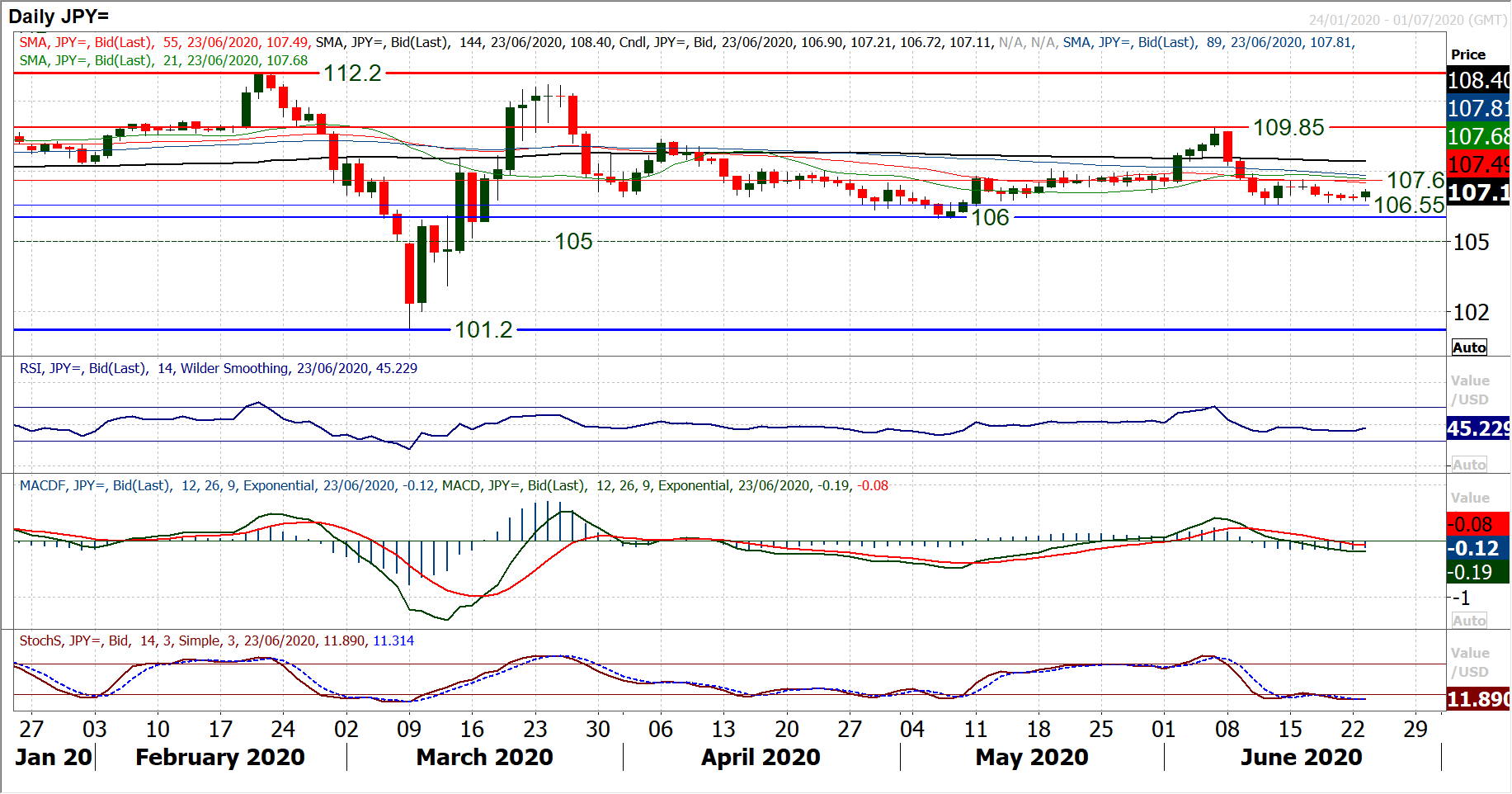 The bulls are holding on to the initial break above $1744 resistance and are now looking to position for what would be a key medium upside break of the two month trading range $1660/$1764. After two months of false dawns and bull failures, can this time be different? There is a notable improvement in momentum underway. The RSI close above 60 yesterday, which is the first time this has happened in over a month. The Stochastics look positively configured to sustain a bull run, whilst even MACD lines are ticking higher from a bull cross. Last night’s close of $1754 was a second consecutive bull candle but also is actually the highest closing price on gold since 2012. The market did have a look at $1764 resistance yesterday but backed off. It doe now mean that the bulls need to hold firm today. The daily chart shows a mild negative candle currently for today, whilst the hourly chart has hints of negative divergence on momentum. Holding on to support of the breakout above $1744 will help to build pressure for the test of $1764. We have become ever more cautious of upside moves on gold in the past two months, and we look for confirmation of a breakout before we can trust that this is not simply part of the medium term trading range still. Despite this though, we are still on the lookout for an eventual upside breakout of the medium term trading range. It is just whether this is the time at which we see it. We remain to be convinced. 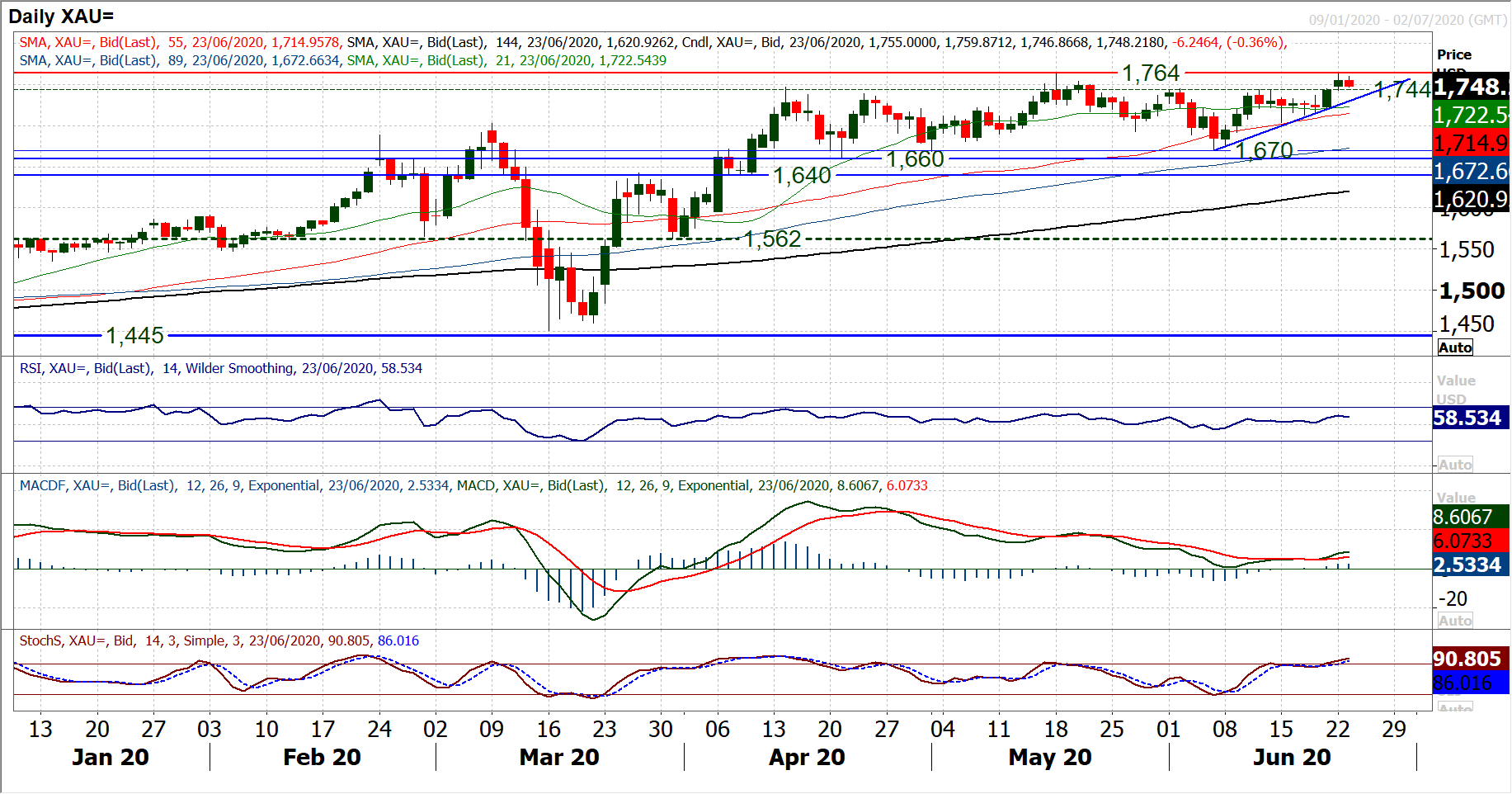 Another decisive positive candlestick has pulled Brent Crude towards a test of the key $43.40 resistance of the rebound high. With six positive closes and solid bull candles in the past seven sessions, the market seems to have built strong momentum now for a run through the resistance which would be a three month high. The huge downside gap of $45.20 from early March being “closed” would be the next significant step forward in the oil price recovery. Momentum indicators are well positioned, with the Stochastics accelerating into strong configuration, RSI into the high 60s and MACD lines set to turn back higher again. Intraday weakness is a chance to buy. The hourly chart shows good support now around $41.50/$42.00, with the rising 55 hour moving average (this morning around $42.30) used throughout the past week as a basis of support. A close above $43.40 would be the move the bulls are looking for today, and then to close above $45.20 which would significantly open upside further. The bulls will remain confidence above $40 support now, with a five week uptrend sitting at $39.70 today. 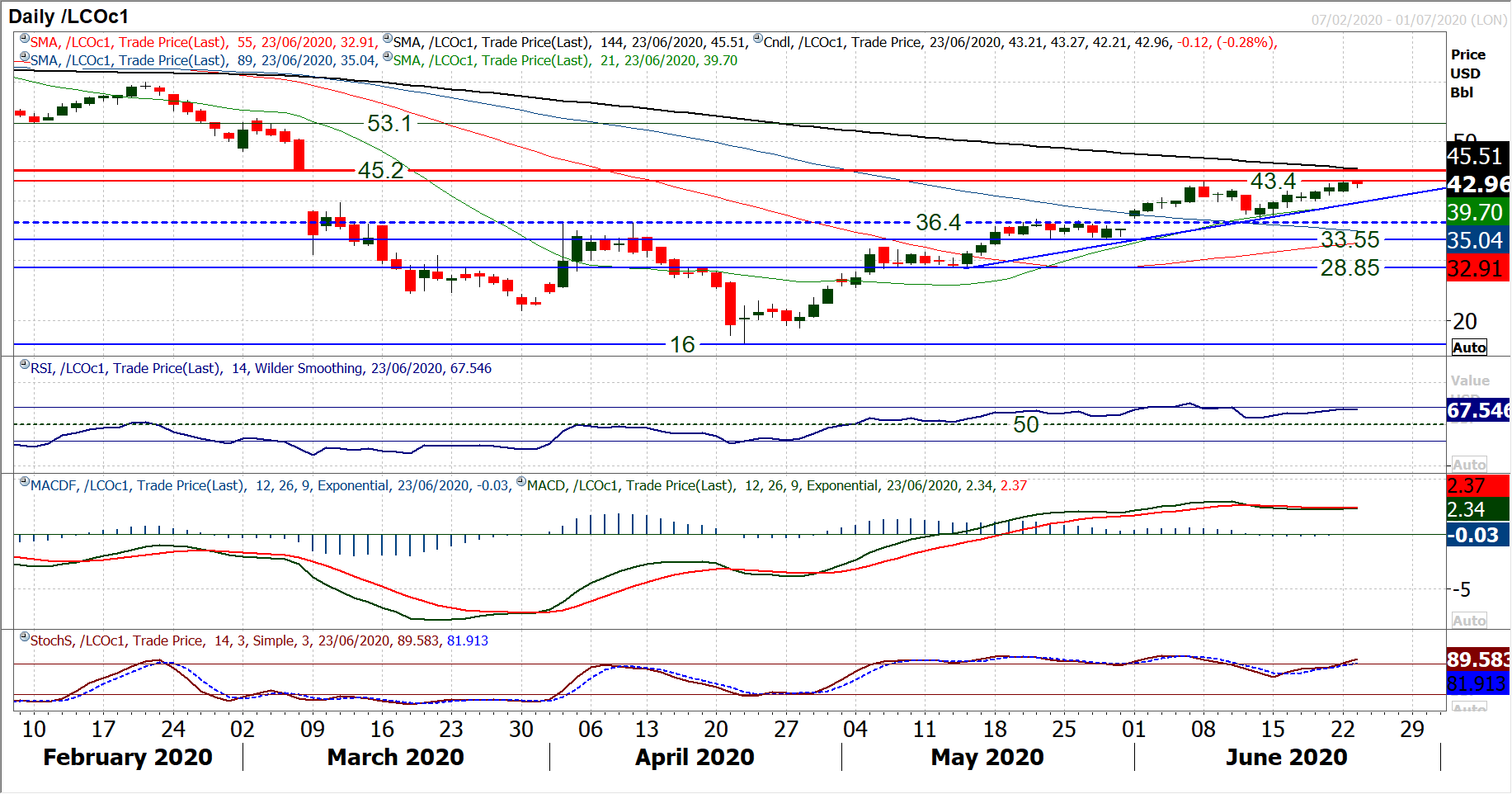 As Wall Street has consolidated over the past week, there is still a concern that this could be part of a big topping process. The big gap of the early June island reversal is very much intact and seems to be being fortified by the intraday failure highs that are racking up recently. Friday also saw another minor gap at 25,890 now “closed”, whilst the original uptrend that has flanked the recovery rally is now being consistently breached. For now, this is still just a consolidation and it would only be a closing breach of 24,765 which would complete a big top pattern. However, the longer the resistance of the island reversal gap between 26,384/26,930 remains in place, the harder it will be to break. Momentum indicators are still in a medium term positive configuration and are reflecting the near term consolidation. RSI holding around the 50 mark, with Stochastics holding neutral and MACD lines benign. Futures are ticking mildly positive early today, but resistance at 26,450/26,610 (the recent highs) need to be overcome to at least begin to stoke something out of the bulls again. 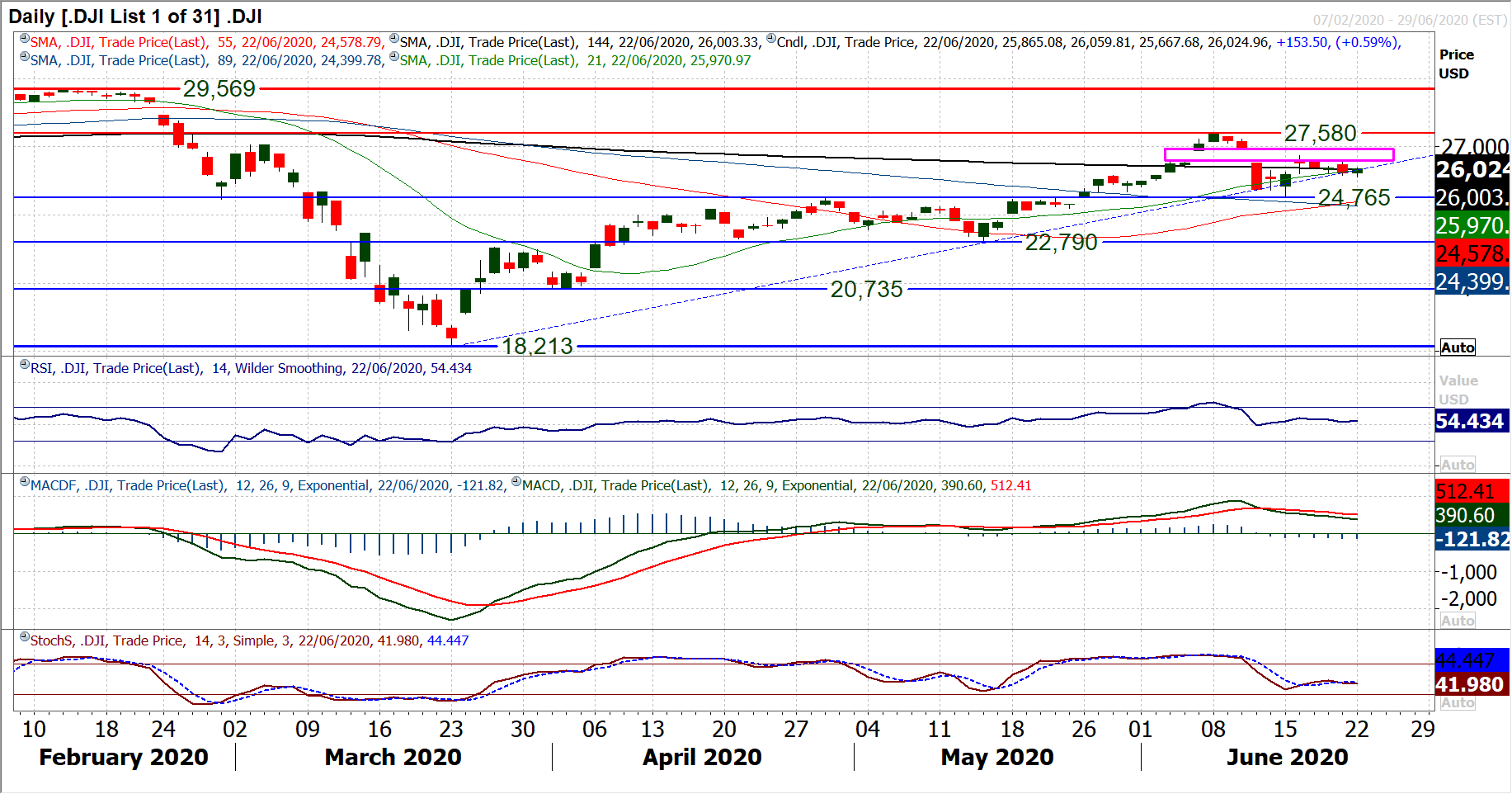