A phase of uncertainty has developed on gold, where the bulls have been looking to re-assert themselves, but are being hit by a spate of near term sell-offs. The outlook for the dollar and Treasury yields remain a key factor in the outlook for gold as a short covering dollar rally dragged gold back again last week. Looking forward, the market will be keeping a keen eye out for Fed chair Jerome Powell’s speech at Jackson Hole. This makes for a continuation of the uncertain outlook near term, but we still look to use supported weakness as a chance to buy. 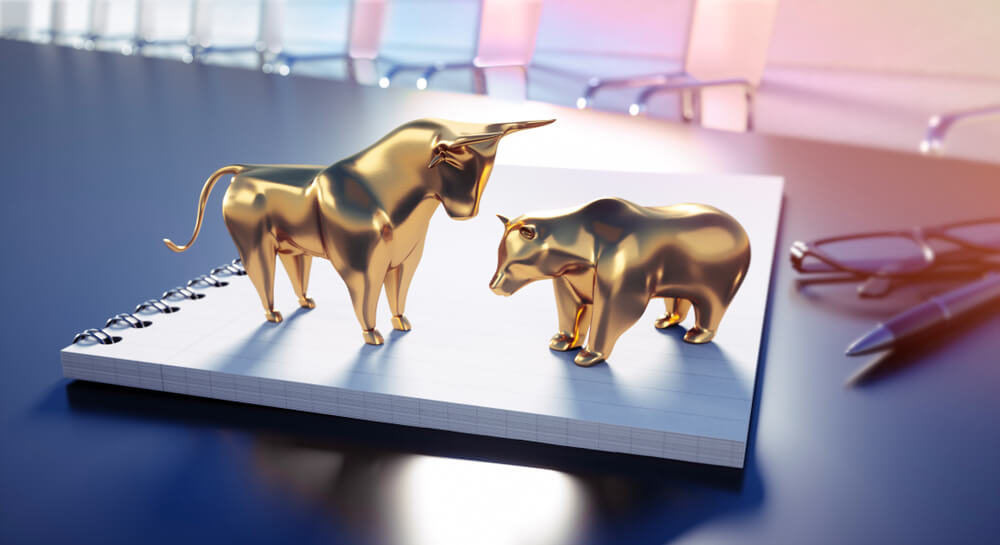 After the huge run higher on gold throughout July, August has been far more choppy. Moves on the dollar have had a key role to play here, but it is also interesting to see the correlation still strong with Treasury yields too.

The US dollar has seen a couple of rebounds in the past few weeks. Both have driven corrective moves on gold. The latest came last Wednesday and was helped in part by the FOMC meeting minutes. The market has been very bearish on the dollar in recent weeks. According to the CFTC, net dollar futures have been negative for the past couple of months and this is fairly extreme positioning (relative to the past few years). This had a degree of unwinding last week (a short covering rally), but futures positioning remains very negative on the dollar. If this continues, we can expect the dollar to remain under pressure. 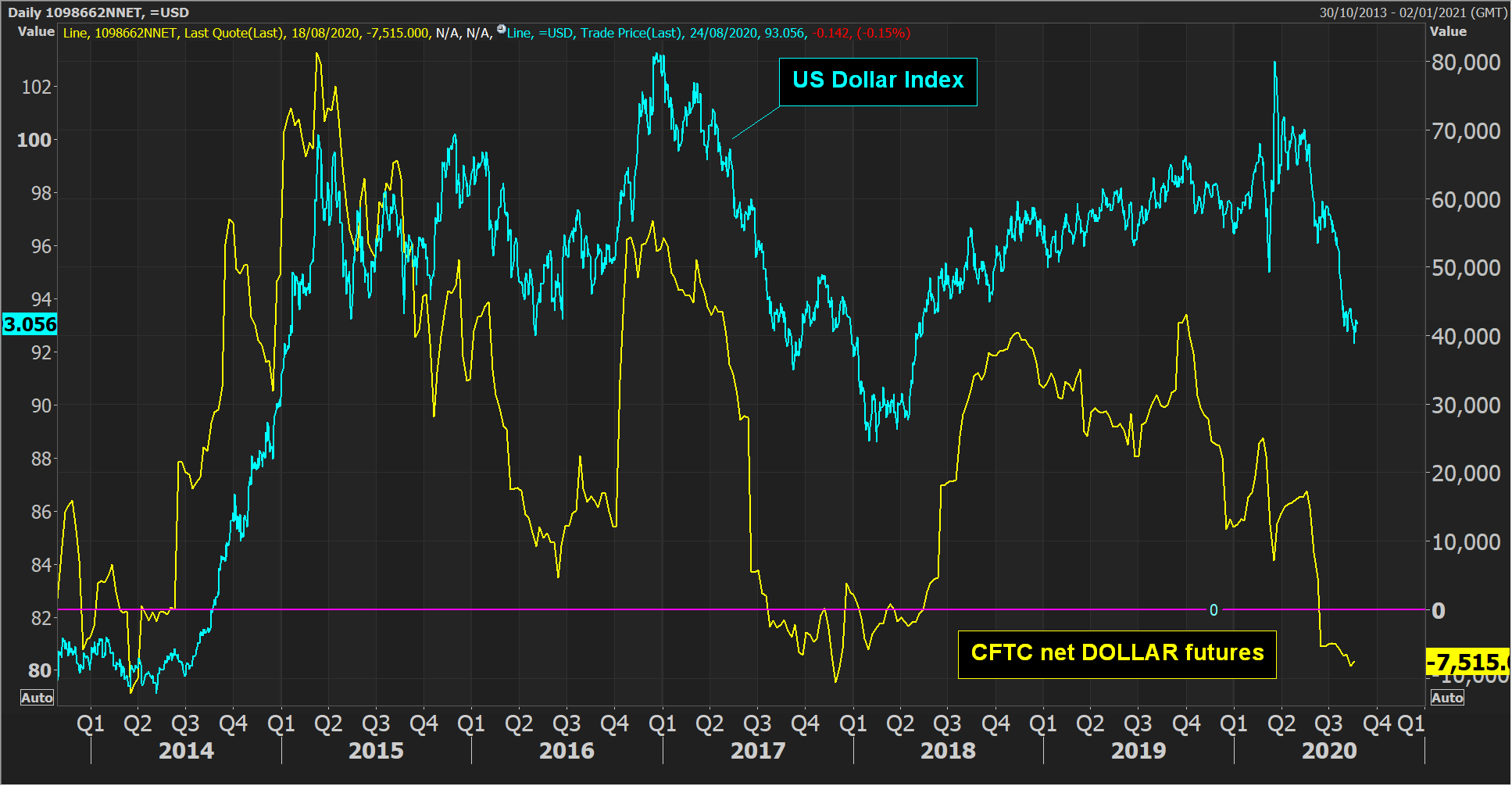 This negative positioning has driven a weaker dollar, as can be seen by the Dollar Index which has fallen sharply in recent weeks. Despite last week’s short covering rally, we expect the dollar to remain under pressure. By extension, the negative correlation with gold has been a key feature in recent months. Although the 21 day Correlation has unwound from record levels last week, the outlook remains one of a weaker dollar being positive for gold.

With the Dollar Index remaining under 94.00 resistance, we expect gold to remain largely supported.

Treasury yields have been slipping back even as the dollar has rebounded recently. A yield curve “bull flattening” (longer dated yields falling faster than short dated yields) is still playing out and this is dollar negative. Despite the near term bounce on the dollar, we expect this to be short lived and if yields continue to fall then gold should remain supported (the strong negative correlation is still supportive for gold).

Attention this week will be on Fed chair Jerome Powell, who speaks at the Jackson Hole Economic Symposium, on Thursday (at 1410BST). In previous years, the Fed chair’s Jackson Hole speech has been used as a platform for decisive signals of intent by the Federal Reserve. As such, this week’s speech could be similar, given that the Fed is edging towards further dovish moves (at least that was the steer of the FOMC minutes). This will likely drive significant volatility through Treasury yields and the dollar, and by extension through gold.

We cannot rule out another gold decline, but we continue to view near term weakness on gold to be a chance to buy.

Looking further out, we still believe that fundamentals on gold will underpin for a stronger gold price in the medium to long term. Loose global monetary policy for many months (and possibly years) to come, will keep real yields subdued/negative and should continue to mean gold is attractive. Subsequently, this is still a good environment to be buying gold into supported weakness.

The legacy of the sharp dollar short covering rally in the wake of the FOMC minutes that hauled gold lower, is still hanging over into the new trading week. A couple of mixed daily candles into Friday’s close now means that gold has now closed lower for two consecutive weeks. It leaves the near to medium term outlook somewhat mixed now amidst a variety of technical signals to sift though.

The bull trend of the past 11 weeks remains intact (in around $1897 today), whilst the unwind is also settling around 23.6% Fibonacci retracement of the $1451/$2072 big bull run around $1926. The unwinding MACD lines reflect the roll over from the all time high still, whilst RSI and Stochastics are looking more settled. We continue to believe that this weakness of the past two weeks represents a medium term buying opportunity, but the bulls are currently slipping in their grip on the market.

It is causing the near term moves lower, which may not be enough to decisively change the outlook, but also means that conviction buying is yet to return to the market. However, gold has only closed once below the 23.6% Fib ($1926) and the longer this continues, the more confidence will grow. Friday’s low at $1911 is further support above the 11 week trend line. A close back above Friday’s high of $1955 will again improve confidence, but for the bulls to flourish again, $2015 (the lower key high) needs to be broken. Support at $1864 is still key.

STRATEGY: The market is looking less certain technically on a near to medium term basis. However we still see supported weakness towards the medium term uptrend around $1900 as a chance to buy. Whilst we cannot rule out another near term decline, the longer term fundamentals point higher. Above $2015 opens the upside with conviction once more. 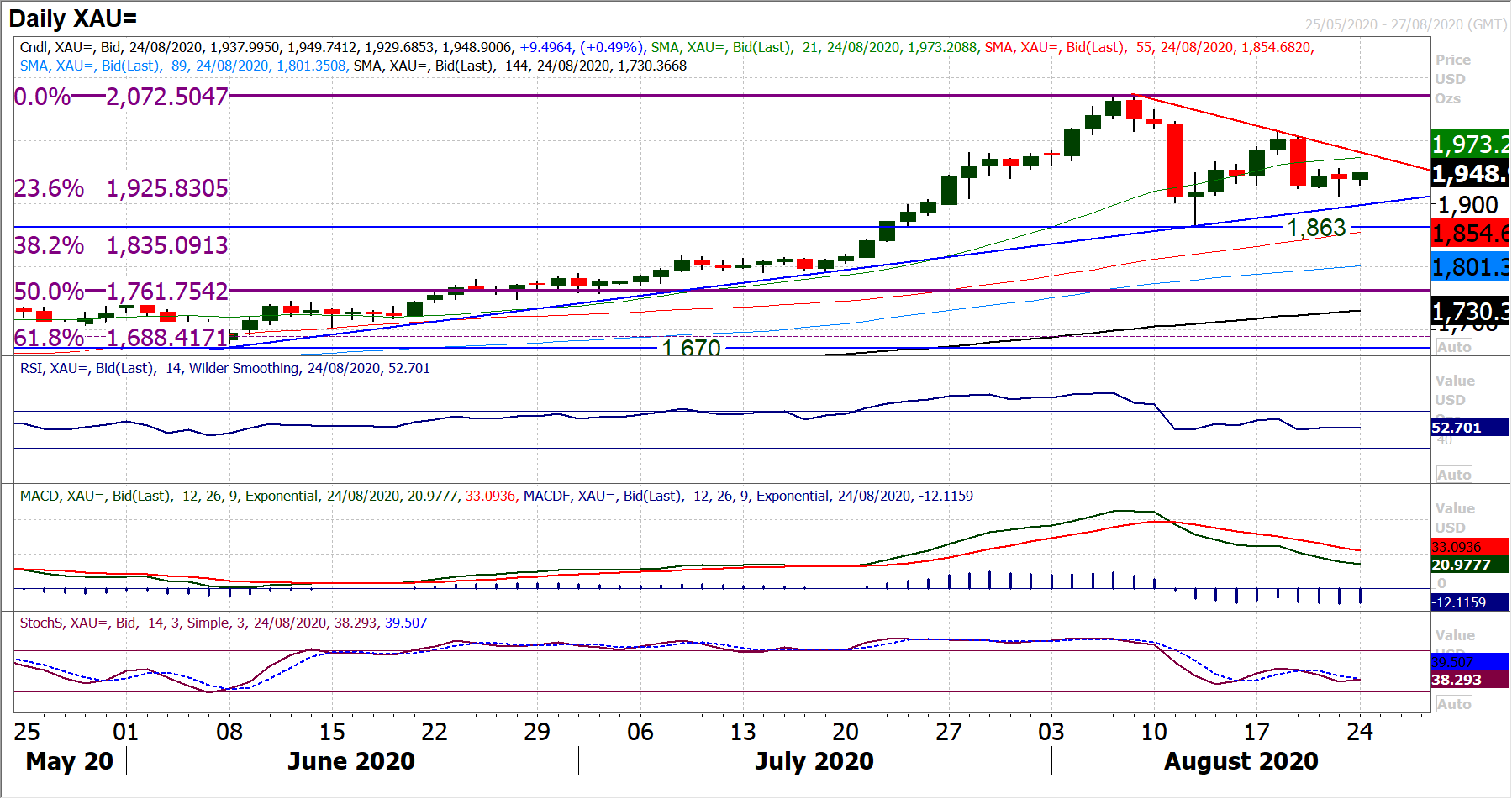 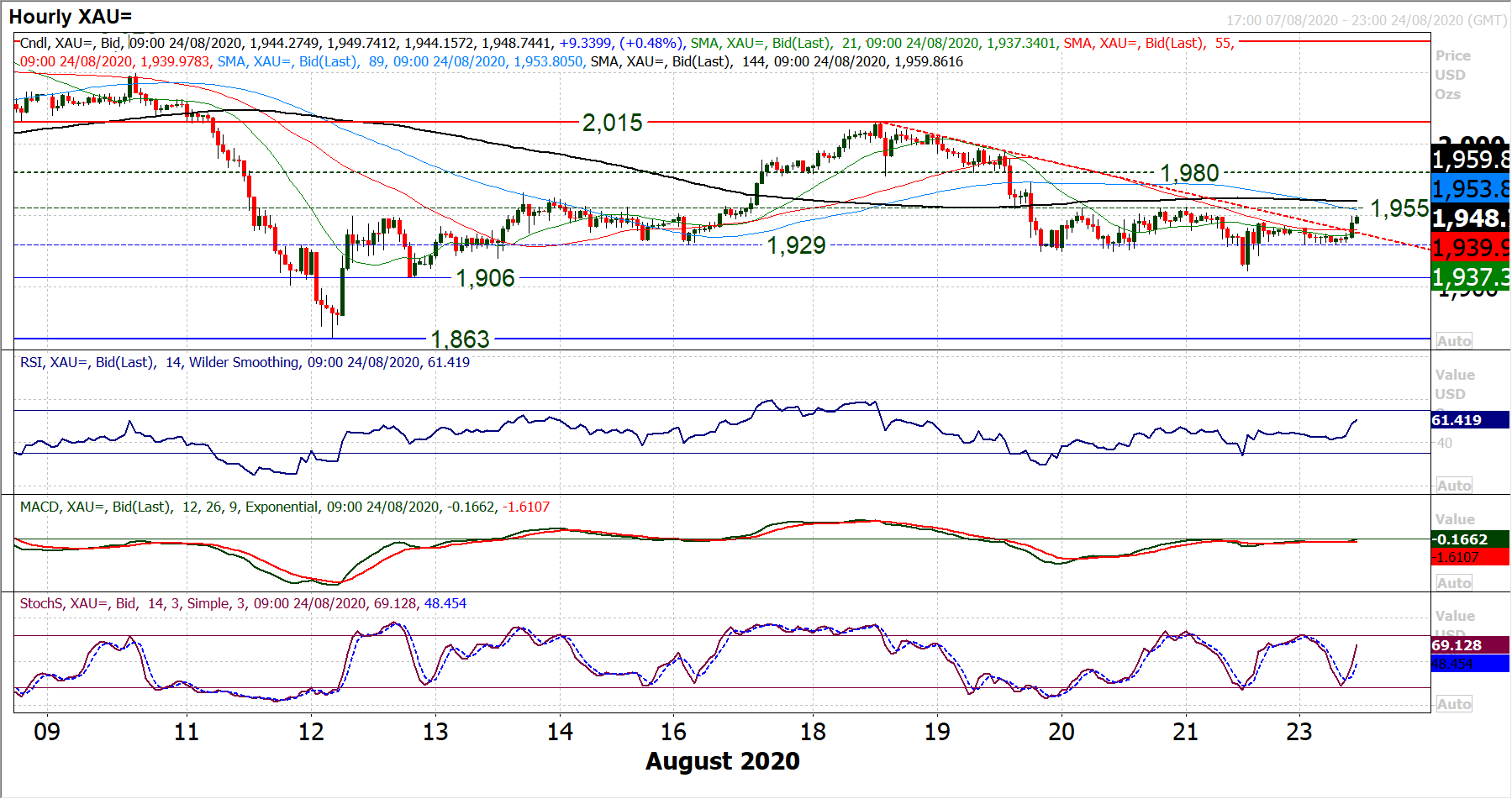