Gold volatility to ramp up on Powell, but a dovish lean should be positive

Near term uncertainty ahead of a crucial speech from Fed chair Jerome Powell leaves gold in range $1902/$1955. How dovish Powell sets up could have key implications for yields, the dollar and therefore gold. Once the volatility subsides though, we see the fundamentals set up for further gains on gold, whilst weakness is a chance to buy. 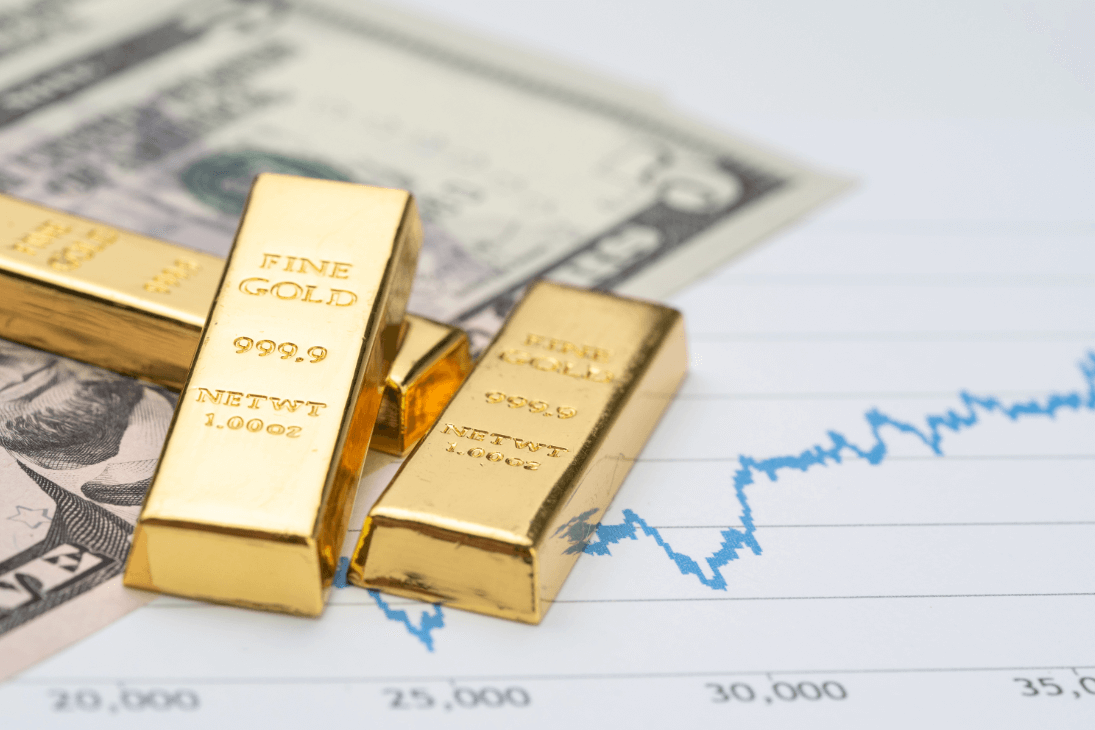 At 1400BST today, Fed chair Powell speaks via webcast at the Jackson Hole Economic Symposium. The chairman of the FOMC is expected to take the central bank of the US towards a new paradigm. The Fed’s mandated target of keeping inflation at 2% could be at least become clouded, and possibly could be succinctly  changed to an “Average Inflation Target”. This could have a significant impact on Treasury yields, the dollar and by correlation, gold.

If Powell signals that in the next FOMC meeting (on 16th September) there will be a move to allow inflation to hold above 2% without increasing interest rates, this Would have a key impact on inflation expectations. It would suggest that the Fed is willing to keep rates at record lows (and engaging huge amounts of QE) for some time to come in order to generate the inflation needed to prevent the US economy from years of stagnation similar to that of Japan.

This would be negative for yields and negative for the dollar. As we have covered extensively over the recent months, there are still strong negative correlations between Treasury yields and gold, and the dollar and gold. Subsequently, if Powell meets expectations of the market today, then we are likely to see gold moving higher. It plays into the long term looser for longer monetary policy of the Fed. If it generates further out, this is also gold supportive. In an inflationary environment whilst rates stay at record lows drives real yields lower and is positive for the gold price.

Today, ahead of the speech, we see gold still in a five day consolidation (between $1902/$1955) as part of a bigger consolidation triangle (see Technicals below). The dollar and yields are also consolidating as markets are cautious ahead of Powell. This consolidation is likely to be broken later today and we are likely to see a key move on gold.

On the US 10 year Treasury yield, a limit of around 0.73% seems to again being hit prior to Powell. If he is dovish, there is certainly room for a sharp move lower on yields and this would help to drive another gold break higher.

The Dollar has consolidated recently, but remains broadly bearish. A recent unwinding of the correlation does not detract from the continued negative relationship between the dollar and gold. Further downside on the dollar would be gold positive.

Looking further out, we still believe that fundamentals on gold will underpin for a stronger gold price in the medium to long term. Loose global monetary policy for many months (and possibly years) to come, will keep real yields subdued/negative and should continue to mean gold is attractive. Subsequently, this is still a good environment to be buying gold into supported weakness.

Volatility ramped up once more on gold yesterday as the bulls moved decisively to prevent a near term breakdown. The resulting rebound of over +$50 from session lows formed a decisive positive candle (a bullish engulfing/bullish outside day). Leaving a low at $1902 reflects the growing importance of the support effectively in the band $1900/$1910. Technically this was also important as the market again bounced of the support of the 11 week uptrend. However, the bulls are not yet in control though. Failing at the resistance of a now three week downtrend this morning leaves a symmetrical triangle consolidation pattern formation and the market is still lacking decisive trend moving into Fed chair Powell’s speech today, perhaps understandably.

We anticipate elevated volatility to continue in the wake of the speech and there is still the risk of a near term breakdown. We would continue to view the 23.6% Fibonacci (of $1451/$2072) retracement as a near term gauge of sentiment (at $1926) and a decisive closing breach increases the corrective potential near term. The 11 week uptrend sits at $1907 today.

Our strategy remains to buy gold into supported near term weakness, and once through Powell’s speech we should know more as to whether there is room for another leg lower and possible drop into the mid-$1800s, with support at $1863. However, we would see this as a likely opportunity. If the support continues above the 23.6% Fib, then the risk is for renewed buying pressure to take hold to drive for a close above $1955 would break the mini downtrend, and be a near term breakout (on the hourly chart this is shown well). The important resistance then becomes $2015.

STRATEGY: Consolidation has set in and gold is looking less certain on a technical basis over the near to medium term. For now, we still see supported weakness towards the medium term uptrend just above $1900 as a chance to buy. Although we cannot rule out another near term decline potentially into the mid-$1800s, once any near term volatility from Fed chair Powell’s speech settles, the longer term fundamentals point towards a higher gold price in due course. We still favour a move above $2015 which would open the upside with conviction once more to retest the highs. 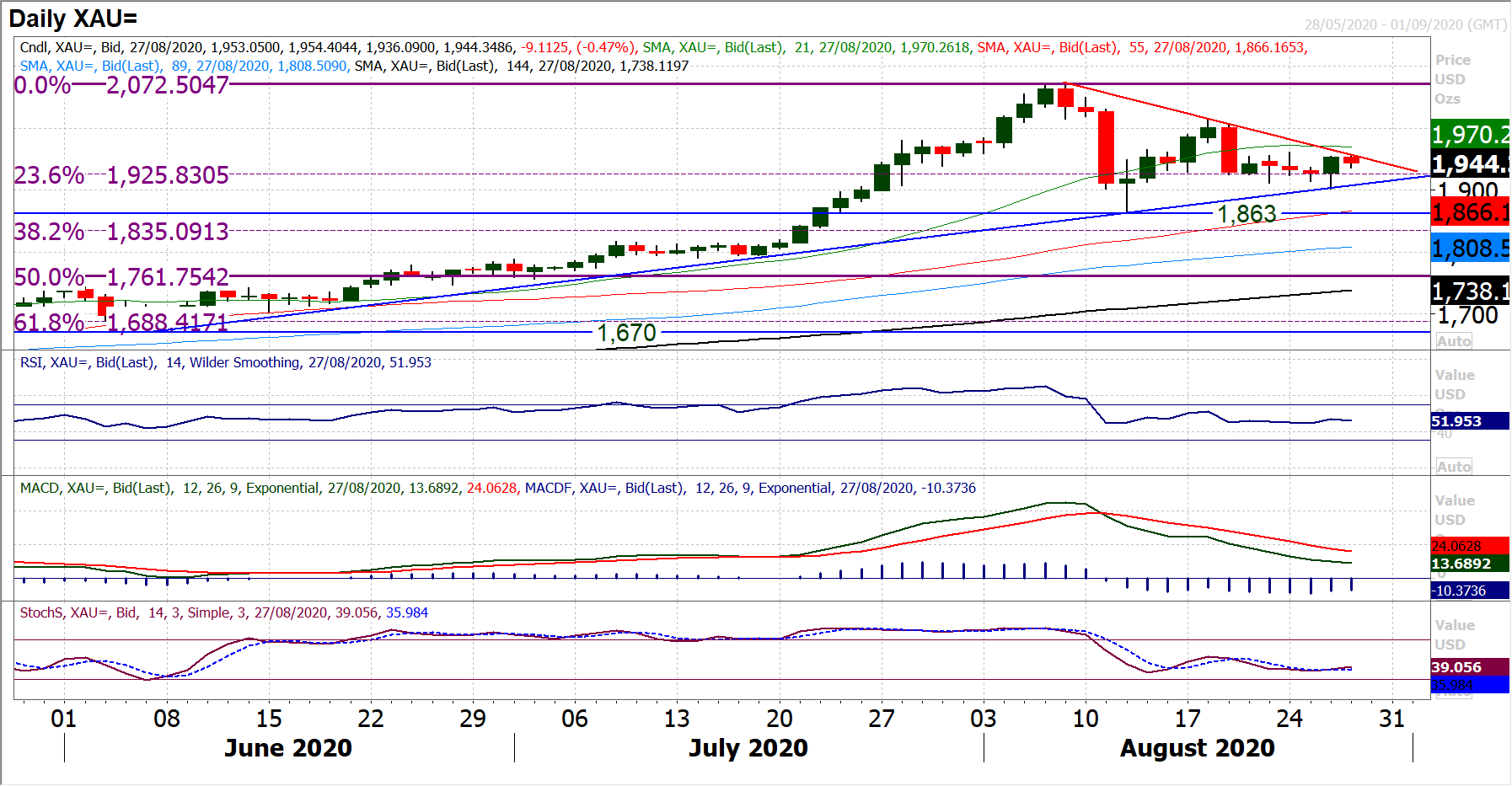 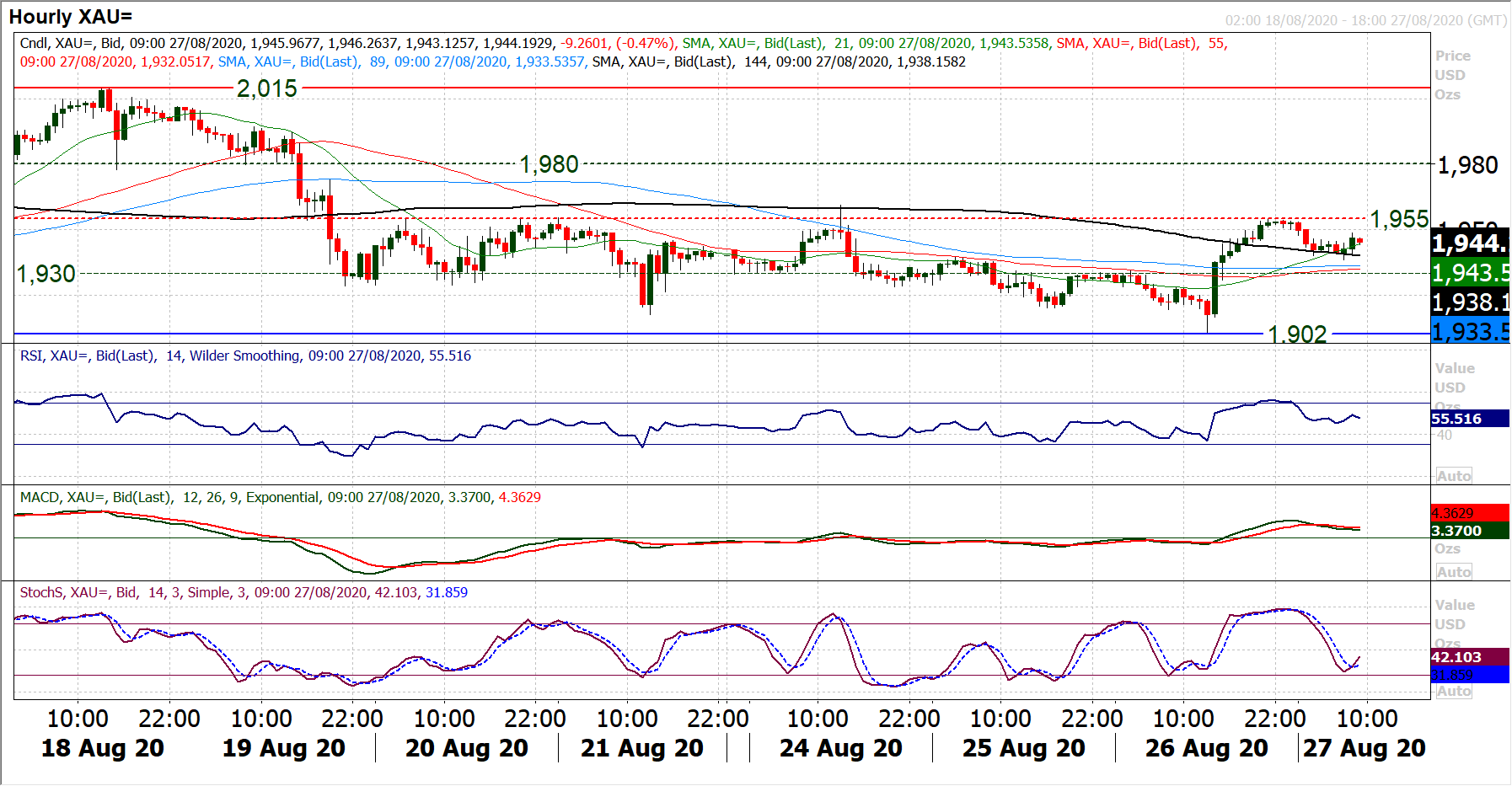