Renewed positive risk appetite is hitting the dollar early this week. Positive newsflow of COVID vaccinations from AstraZeneca and Pfizer have helped to boost sentiment. The dollar is still perceived as a safe haven and as such is coming under pressure once more. This mood has been bolstered overnight, with the announcement of key Chinese data, with retail sales coming in ahead of expectation and back positive for the first time since the pandemic struck. The sharp appreciation of the Chinese yuan is certainly a signal of renewing risk and pressure on the dollar. Although Treasury yields are broadly steady in front of the two-day FOMC meeting, there is a perception that the Fed will confirm the lower for longer mantra for interest rates. This would lay further groundwork for a path of broad dollar weakening in the coming months. A dollar weakening is impacting across major forex pairs today, whilst gold and silver are also feeling the benefit. UK unemployment data for July broadly comes in ahead of expectations even though unemployment has ticked up to 4.1%, although this will worsen in the coming months as the furlough scheme is wound down. Sterling has been supported by this data. 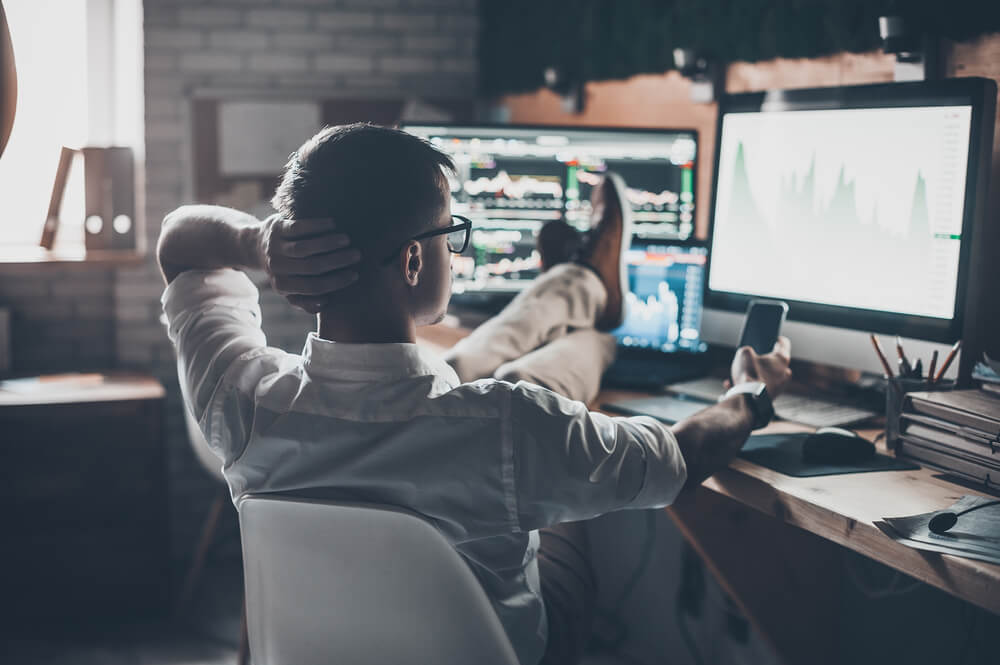 Wall Street found support to climb higher last night, with the S&P 500 +1.3% at 3383. US futures are also gaining ground again today, with the E-mini S&Ps +0.3% today. This has generated a mixed session in Asia, with the Nikkei -0.5% but Shanghai Composite +0.2%. European markets look mildly higher with FTSE futures +0.1% and DAX futures +0.5%. In forex, we see a weaker USD across the major pairs, with the outperformance of AUD and NZD along with a relatively less strong JPY reflecting the improving appetite for risk. In commodities, a weaker dollar is supportive for gold (+$7 or +0.3%), with silver +0.7%. Oil has been starting to show signs of consolidation this week, with a key meeting of OPEC+ on Thursday.

The Kiwi looks increasingly as though a key shift in sentiment and relative performance has been seen. A couple of weeks ago we discussed the bullish breakout and the move to buying into weakness in the 0.6600/0.6715 support band. A correction went deeper into the band of support than we had been looking for, but the support around 0.6600 held firm, along with a six month uptrend and the bulls now look ready to take off again. Yesterday’s decisive positive candle has broken eight day downtrend, whilst improving momentum indicators come with upside potential. Early signs are positive again today with an initial move above 0.6715. A close back above 0.6715 would put the bulls back in the driving seat for another test of the key long term resistance at 0.6790. Above 0.6790 would then open 0.6940/0.6970. There is good near term support now around 0.6640 (building from lows of the past three sessions), also around the basis of support of the six month uptrend. Support at 0.6600 is increasingly key now as the next key higher low. 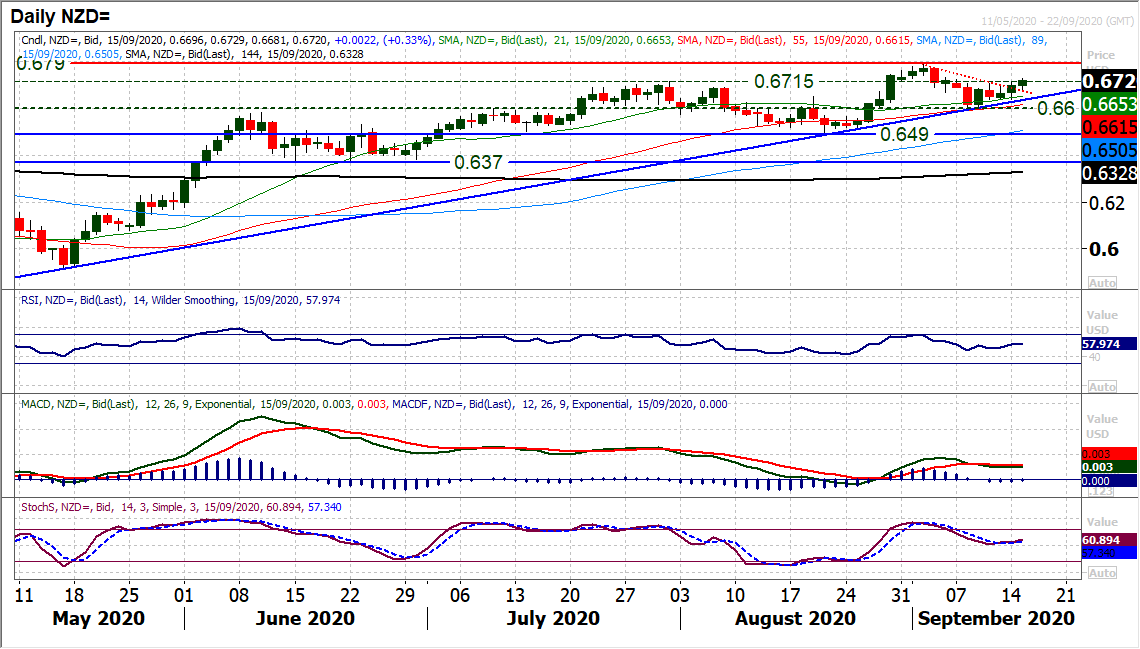 A series of positive closes has re-established the bulls as the driving force in the market. Bouncing off the support of a four month uptrend, but more importantly maintaining the support at 1.1750 was a key medium term technical signal. A near term correction is being used as another chance to buy around the medium term uptrend. The spike high resistance at 1.1915 that was posted in the wake of the ECB meeting last week is set to be tested. If the bulls can overcome this initial barrier it would open 1.2010 once more. It would be at that stage where the market would likely need to consider how the ECB would react (cue jawboning of the euro lower in an attempt to counteract its strength). Technical indicators are now decisively improving, with daily RSI rising above 60, Stochastics also rising and MACD lines bottoming. It suggests near term positions buying into weakness. The hourly chart shows support in the band 1.1855/1.1885. Below 1.1830 would question the near term strength. 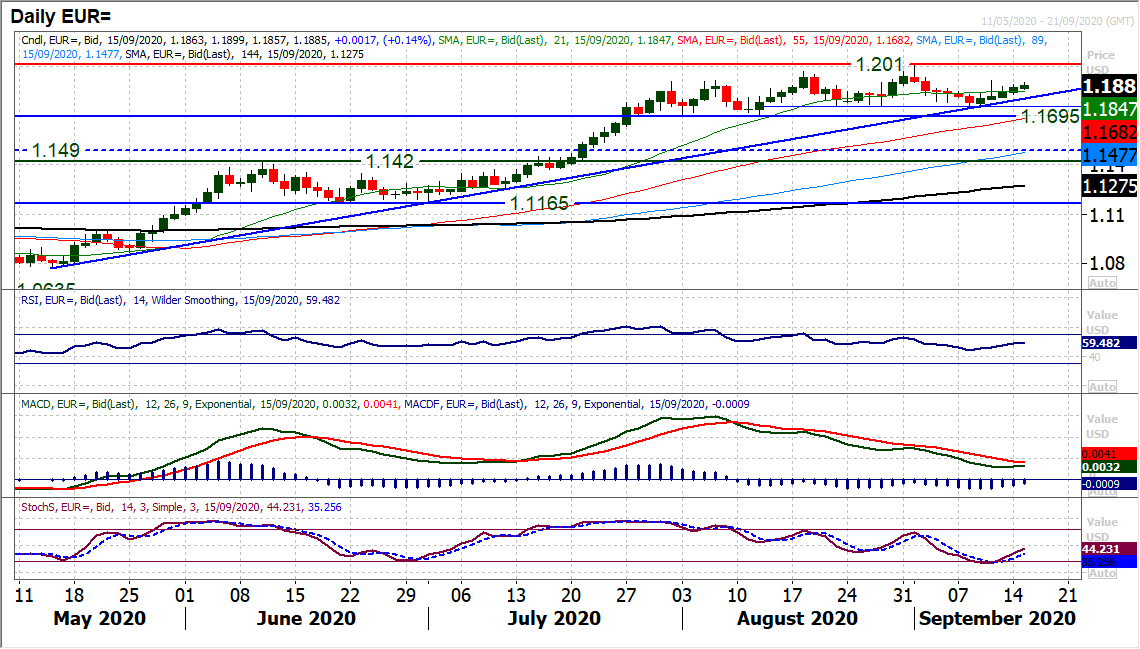 Support has started to form on Cable as the dollar has seen renewed selling pressure in the early part of this week. This comes with the outlook for Cable very much in an uncertain stage. Last week’s big sell-off has seriously damaged the bullish outlook and we turned neutral on a medium term basis. The support has since begun to form around 1.2760/1.2770, but for now, is still only tentative. If this rally now fails under the resistance of overhead supply between 1.2980/1.3050 then the selling pressure could quickly resume. A two week downtrend comes in at 1.2980 today. Initial resistance now from yesterday’s high at 1.2920. 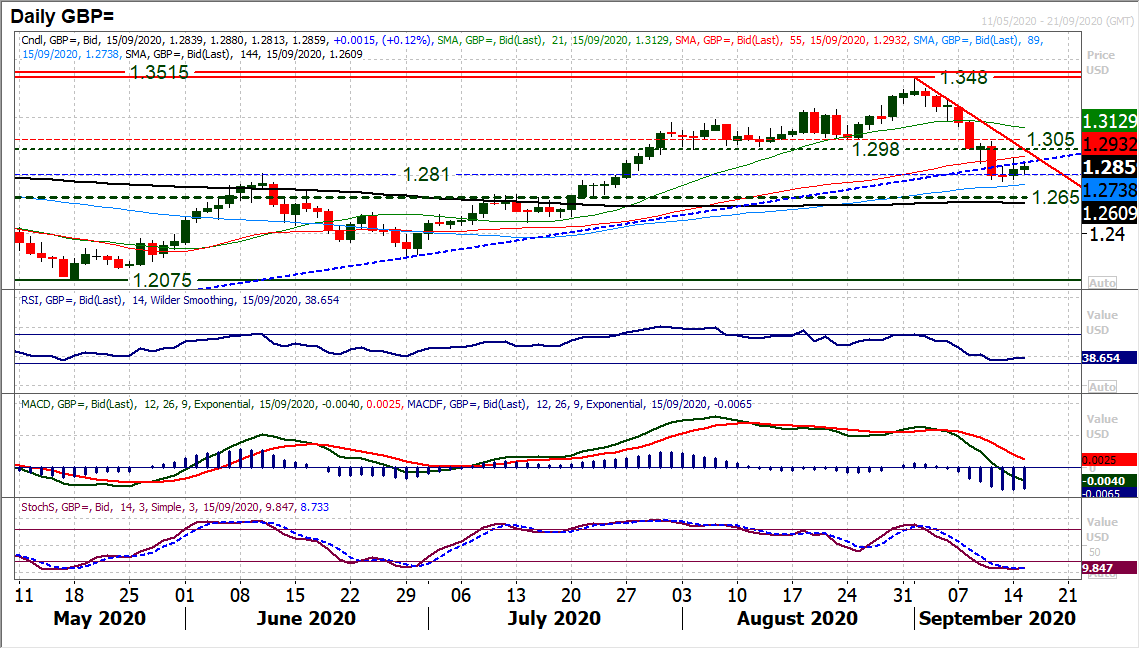 USD weakness really took hold yesterday as the session wore on. This drove a decisive bear candlestick into the close, pulling Dollar/Yen way below the 106.00 pivot. It now takes on an increasingly negative outlook within the 105.10/107.00 range of the past six weeks. A decisive close below 105.75 implies pressure on 105.10. However, given a sharp deterioration in momentum indicators (with downside potential), a move back towards 104.15 would be the risk if 105.10 were to be breached now. It will be interesting to see the reaction of the bulls now. Previously throughout recent weeks, the market has been consistently gravitating around the 106.00 pivot, so today’s reaction to such a decisive negative session yesterday will be seen as a gauge. We would see 105.75/106.00 as a near term resistance band now, and already this morning we see this is becoming a barrier. Resistance is mounting overhead and we can now add 106.30 to 106.50 and 107.00 as resistance. 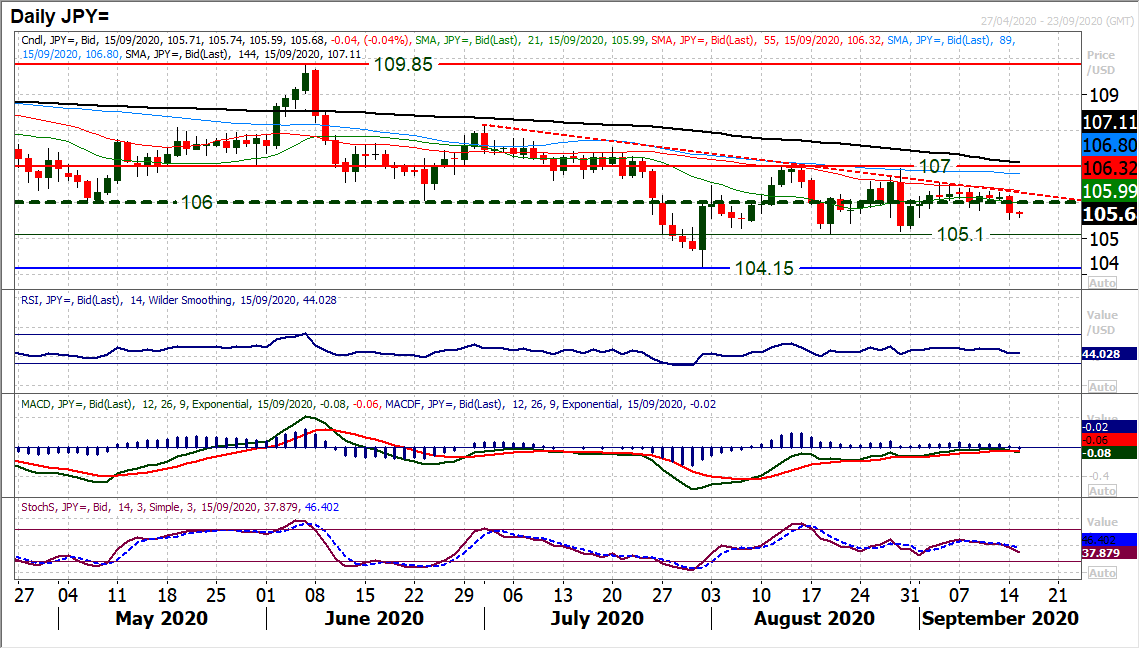 The bulls are just beginning to take control once more on gold. There have now been four positive closes in the past five sessions, and the market is again edging higher this morning. This has stabilised the supports within the $1902/$2015 five week range and the bulls are looking higher once more. Daily momentum is gradually ticking higher again, with RSI at a four week high today, and MACD lines threatening to cross back higher. These moves are still though relatively small, given the Average True Range continues to fall (today down at $31). Despite this, the hourly chart shows a move back above the old pivot line of $1955 (which has since become initially supportive) and the initial resistance at $1976 is being eyed. A move to test $1991 would then be next. The near term importance of the support band $1937/$1940 is growing now too. 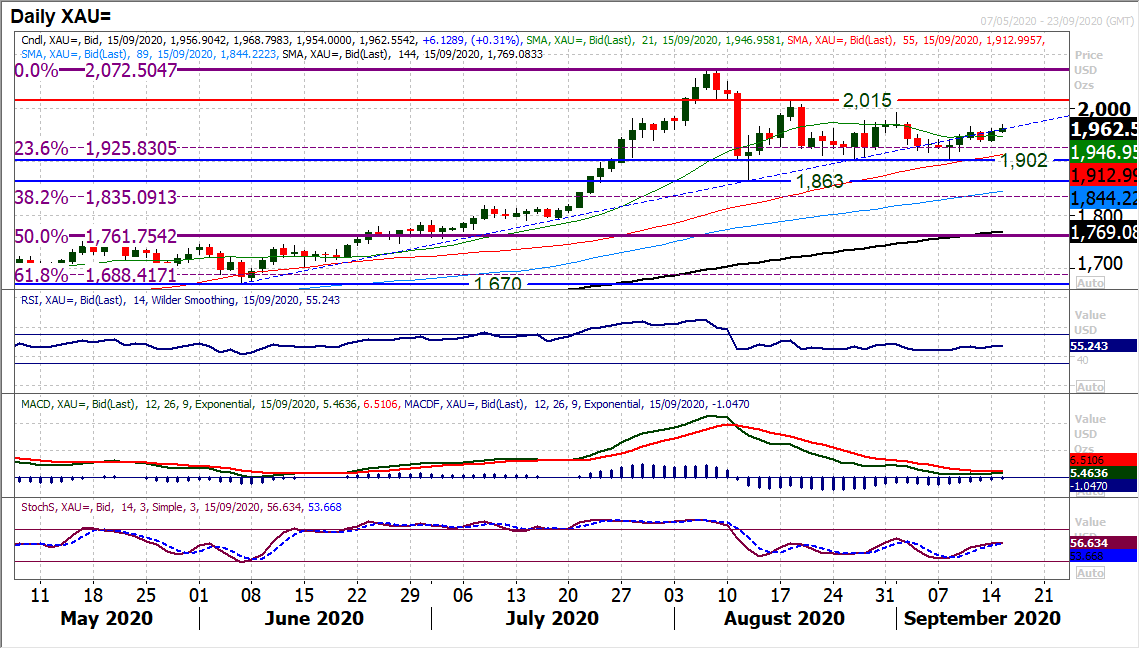 The downside move on the oil price may be continuing, but there is a notable reduction in the selling pressure over the past couple of sessions. Are there just signs of recovery potential forming? Another negative close on Brent Crude is now the ninth in the past ten sessions. Furthermore, there have now been ten lower daily highs in a row now. So this needs to change. Yesterday’s high of $40.10 will be the first barrier that needs to be broken. Interestingly, support at $39.30 was formed early last week, but this low has not been broken in the past four sessions. The key resistance that the bulls need to overcome is at $43.10 (the old July support), but if the market can begin to develop some positive candles, at least a basis of new support can begin to develop. A decisive close under $39.30 would though resume the downside and open $37.00 again. 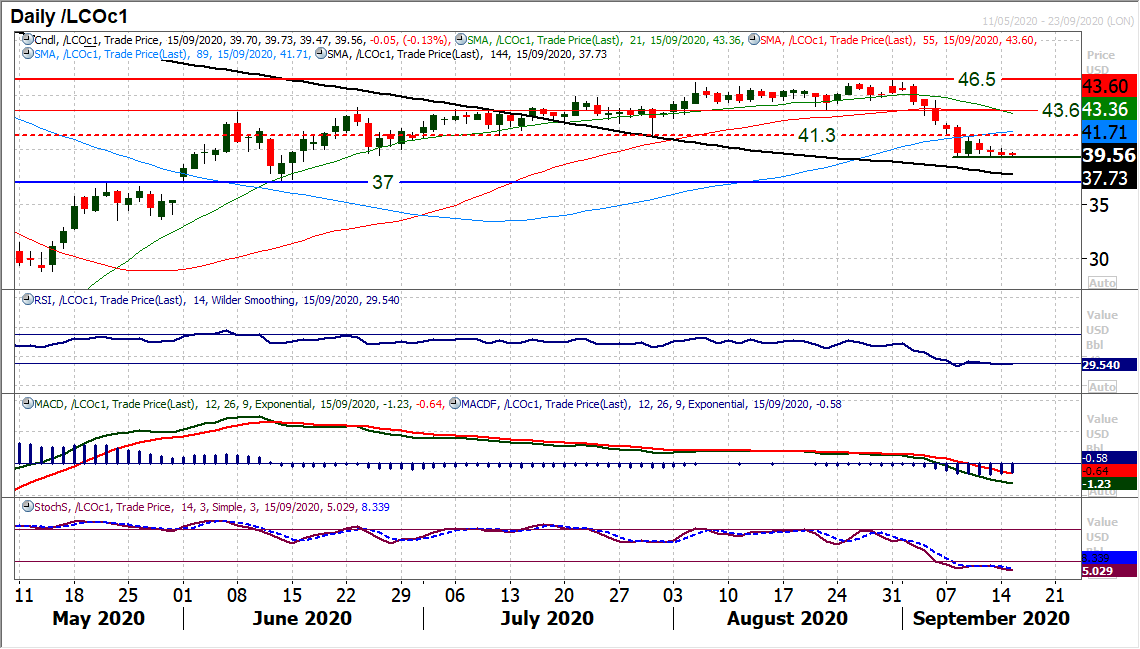 A second consecutive positive close for the Dow has steadied the ship slightly. The threat of a potential five week top pattern is still there (a close below 27,465 would complete it) but the corrective momentum appears to have eased somewhat. The bulls will now be looking to close above last week’s high of 28,206 to suggest that improving momentum is now building. Daily Stochastics and RSI bottoming are encouraging. The hourly chart shows 27,830 as initial support, but the broader importance of the support band 27,465/27,580 is ever growing. We still favour buying into this weakness, but this would change below 27,465. A close above 28,206 would re-open the recent high of 29,200 with initial resistance at 28,540. 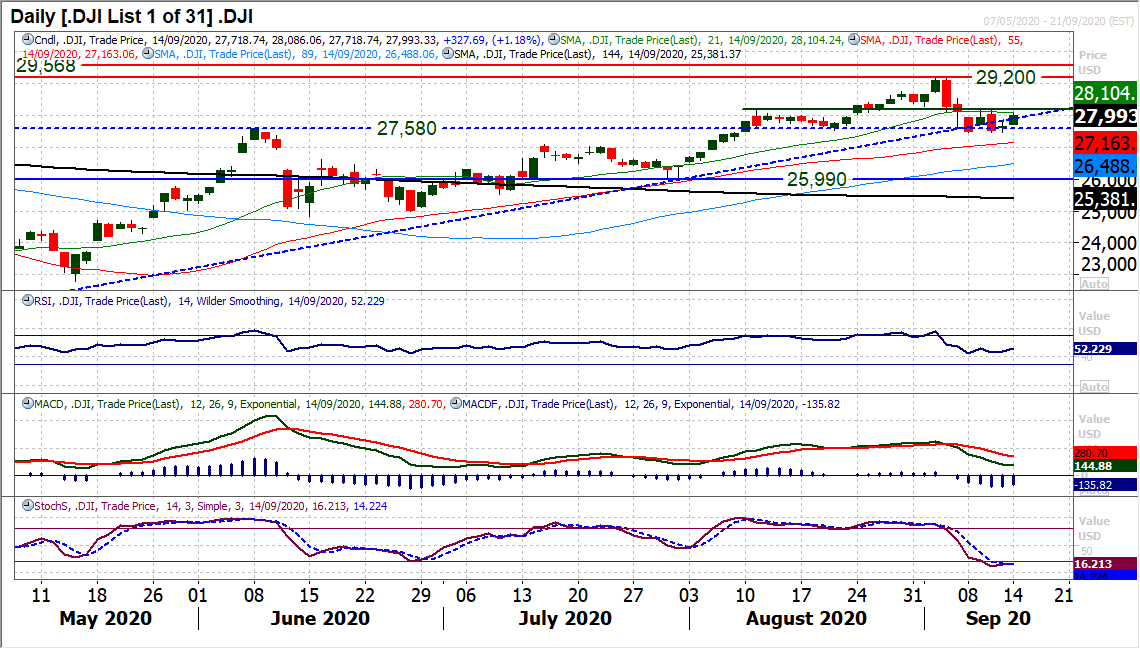