A risk positive start to the week has just begun to lose a little steam this morning. Markets have been able to respond to some good newsflow for a change, as the steps towards a $2.2 trillion package of US fiscal support edges closer and hints of positive steps emanate from Brexit trade negotiations. This is leaves markets at an intriguing inflection point. The dollar has been strengthening in recent weeks as risk appetite has faltered amidst rising second wave COVID fears. This is still a key factor for traders to price for, but if Congress can get a new fiscal support package over the line, it would be a very welcome boost in the coming days. After a couple of sessions of reacting to the initial news, this morning, markets are looking more circumspect. Previously, we have seen hope of agreement in Congress dissipate quickly. It seems that markets need further traction in Congress (but also the EU/UK Brexit trade negotiations) in order to take a view. The dollar has drifted off, but only marginally and so far there has been little sustainable damage to its multi-week recovery. Equities have rebounded, but the move is stalling slightly today. Gold has bounced after a recent phase of selling pressure, but is also stalling. The one decisive mover today seems to be sterling, but again, the politics can change quickly, leaving sterling as a volatile play right now. 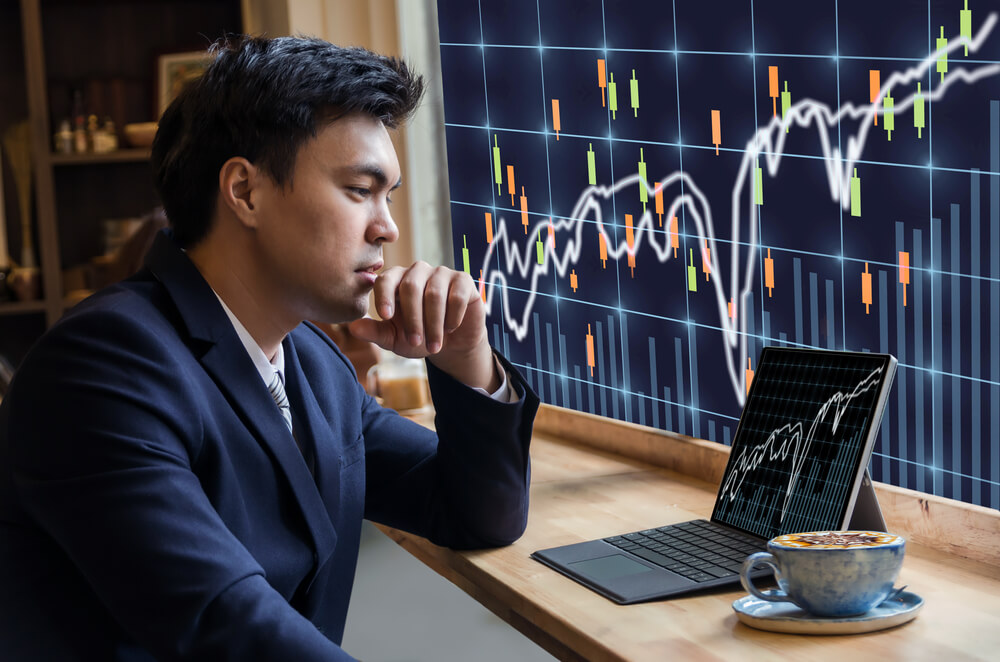 Wall Street closed decisively higher with the S&P 500 +1.6% at 3351, whilst futures are consolidating early today (E-mini S&Ps +0.1%). Asian markets were mildly positive overnight (Nikkei +0.1% and Shanghai Composite +0.4%), whilst European markets are cautious in early moves (FTSE futures -0.4%, DAX futures -0.3%). In forex, the rebound on GBP is once more in force, whilst AUD and NZD performing well is risk positive. JPY is the main underperformer. In commodities, the rebound on gold (+0.1%) has just consolidated this morning, with silver dropping back (-0.7%). Oil is giving back some of yesterday’s gains too.

There is an abundance of Fed speakers to watch out for today, with four on the docket. FOMC’s John Williams (voter, centrist) speaks twice at 1415BST and 1800BST, whilst FOMC’s Patrick Harker (voter, leans slightly hawkish) speaks at 1430BST. Vice Fed chair Richard Clarida (voter, can lean slightly dovish) speaks at 1640BST, whilst FOMC’s Randall Quarles speaks first at 1800BST and then again at 2000BST. With an array of comments this could show some elevated volatility for the dollar today.

The dollar rally which has pulled USD/CAD higher over the past few weeks has begun to consolidate in the past few sessions. The question is whether this is a pause or the whether the rally has run its course. On USD/CAD, the bulls will be now looking to build support around the two important levels which were recently broken. The recent breakout above 1.3230/1.3260 completed a small base pattern (implying +240 pips towards 1.3470). However, the more important breakout was above the long term pivot line around 1.3310 which really confirmed the development of recovery. Ideally the bulls would hold above 1.3310 now to sustain recovery momentum. However, with a new four week uptrend coming in at 1.3210 today, a higher low in the band 1.3230/1.3310 would be another positive signal for the bulls. Momentum is reflecting a decisive recovery now and that near term weakness will still be seen as a chance to buy. The next resistance above 1.3420 comes in at 1.3460/1.3480 which coincides with the base pattern implied target. A breach of 1.3230 would be a disappointment now. 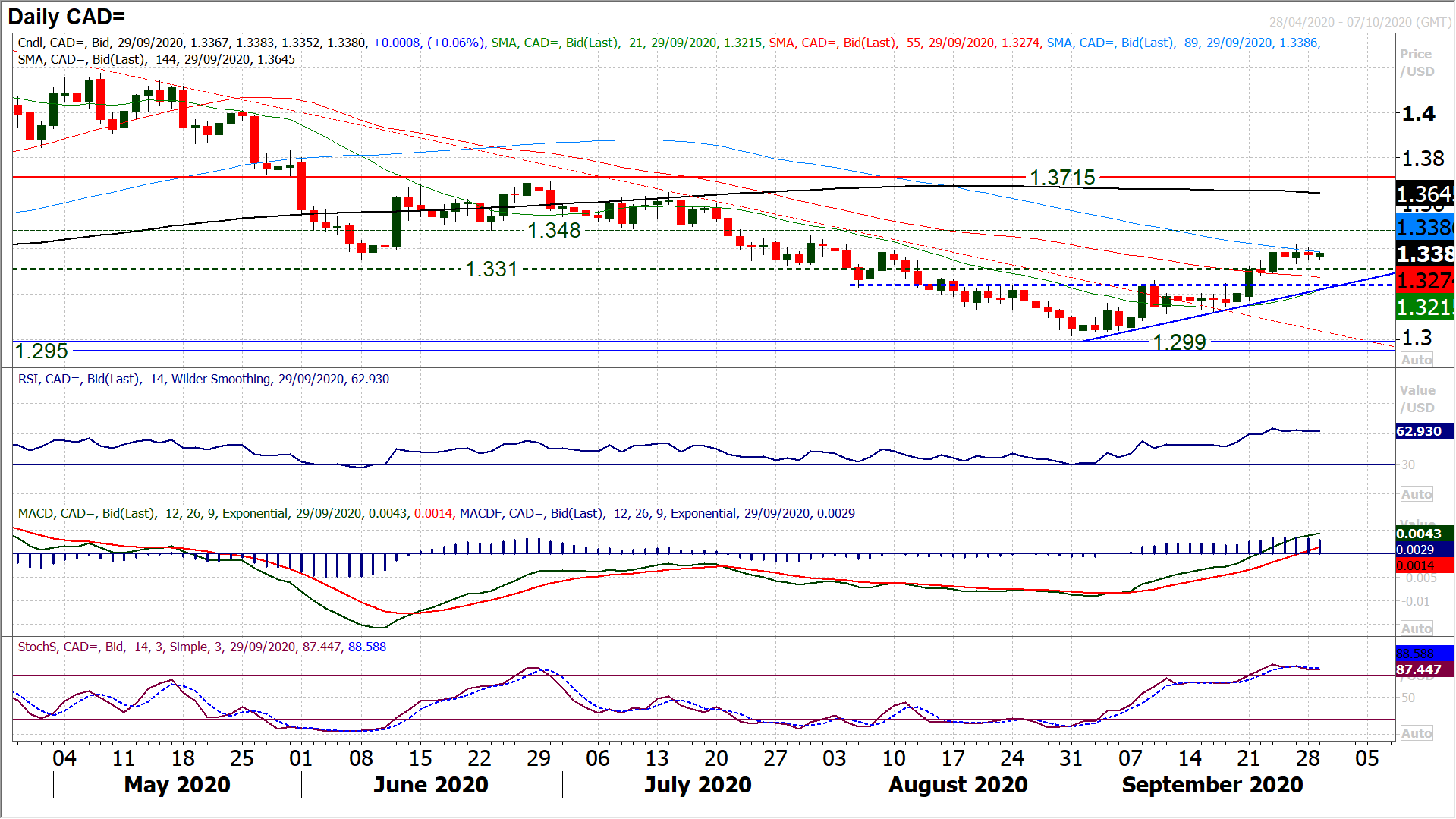 When the dollar rally pulled EUR/USD below 1.1695/1.1750 old key support It was an important breakdown. As the market ticked back higher yesterday, it is beginning to feel as though this is now around an important crossroads again. Old support becomes new resistance of an overhead supply of sellers and how the market responds around 1.1695/1.1750 now will be very important to the development of the outlook in the coming weeks. There is still a corrective configuration to momentum, with RSI, MACD and Stochastics all falling away at ever lower highs, pointing to a consistent theme of selling into strength. The resistance 1.1695/1.1750 would be a classic sell zone if the dollar rally is to continue. If the RSI fails under 50 then this would be another sell signal. Initial support is at 1.1610 and protects a retreat towards 1.1420/1.1490. A close above 1.1750 would question the strength of the dollar recovery, with a now four week downtrend around 1.1805 today. 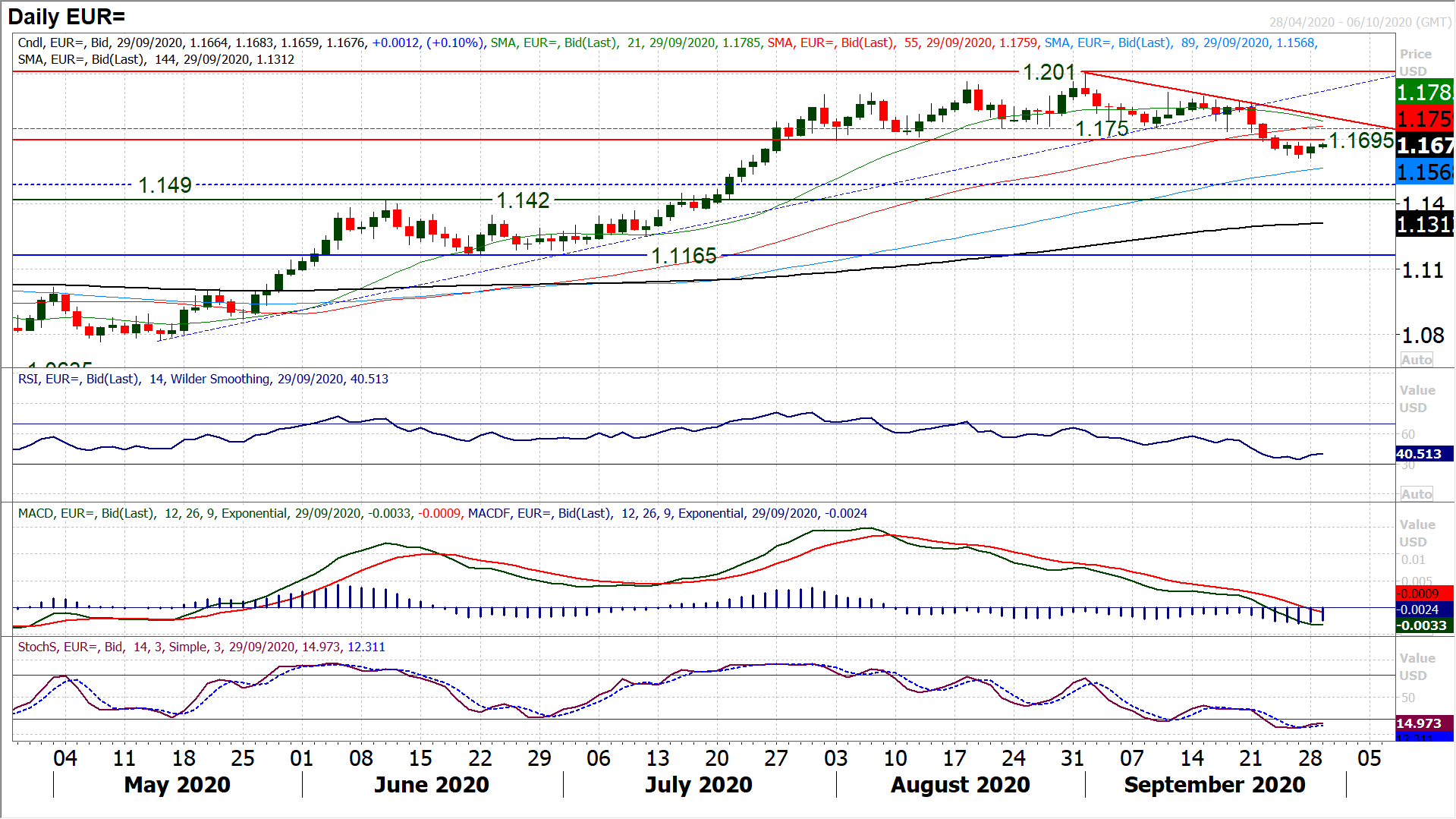 With the dollar strength looking less secure in the past couple of sessions, and Brexit positivity pulling sterling higher, we saw a Cable rally yesterday. However, even though there was a +80 pip rebound on the day, this also included a questionable bull failure which pulled the market -100 pips off the day high into the close. It seems that volatility is building up, which needs to be considered when positioning. The technical show that yesterday’s move has potentially turned a corner, but a close above 1.2860 is needed to confirm an improvement. This would then open 1.3000. Momentum indicators have improved, but again, look to be at a crossroads, where RSI and Stochastics are again around levels where the last rally failed in mid-September. This outlook essentially plays into our medium term medium/uncertain position between 1.2650/1.3000. The hourly chart reflects the near term pick up which needs to now hold above 1.2825 to be sustained. 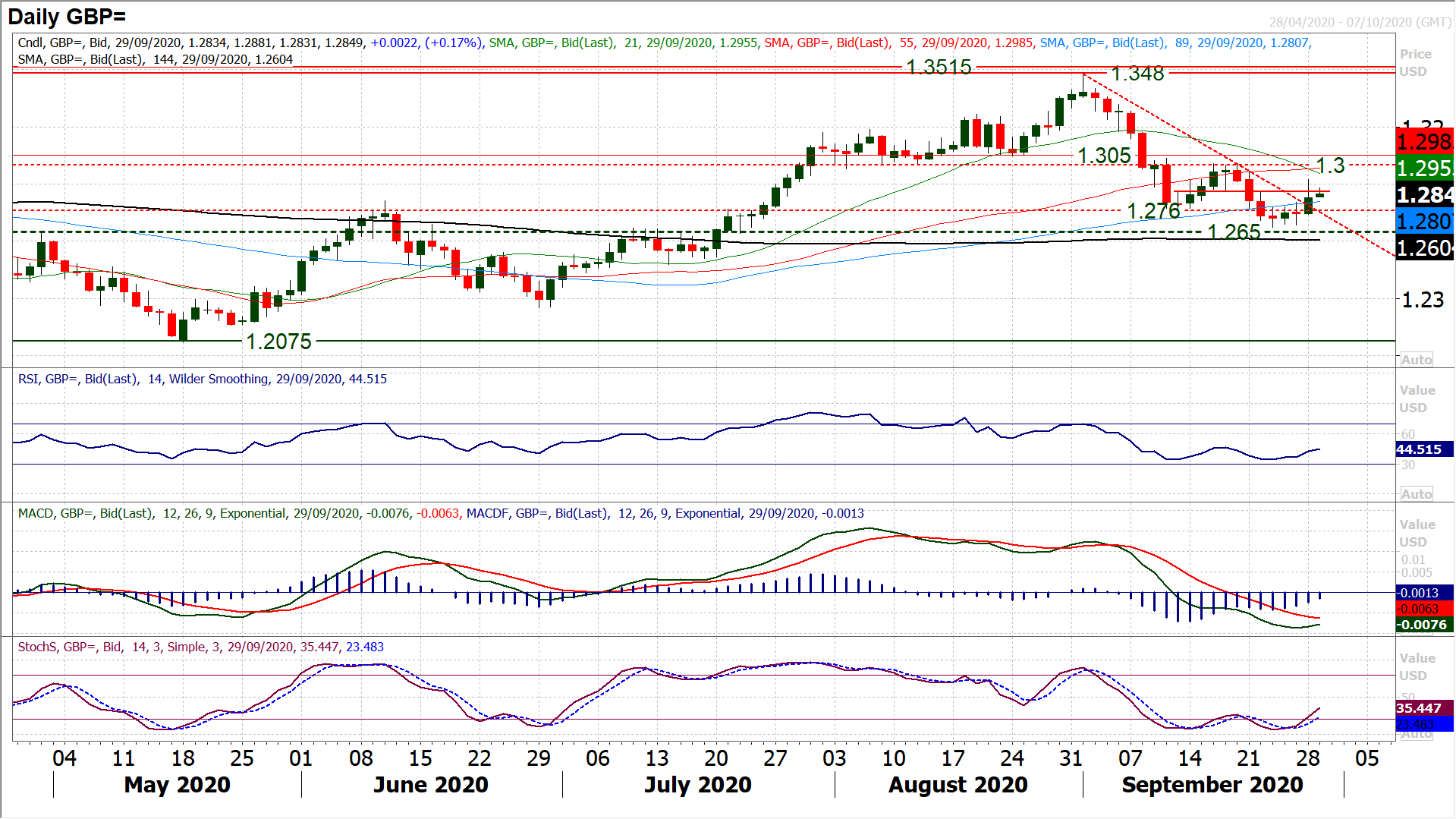 For about a week now we have been speaking about the consistent theme of buying into intraday weakness on Dollar/Yen. This was in evidence once more yesterday as another positive reaction to early selling pressure came through into the close. However, there is a slight loss of momentum as two of the past three sessions have consolidated and “doji” candlesticks (open and close at the same level) have formed. This has seen RSI and Stochastics begin to tail off. The market is ticking mildly higher this morning and there is still a positive bias to the recovery, albeit only slight now. It could be that the closer the recovery gets to the three month downtrend and 55 day moving average (both at 105.90) and the medium term pivot at 106.00, the less downside potential there is and the move loses steam. Additionally, the RSI is now around 50, where previous rallies of the past few months have begun to dissipate. Initial resistance at 105.70, whilst support is still in place between 105.10/105.30. 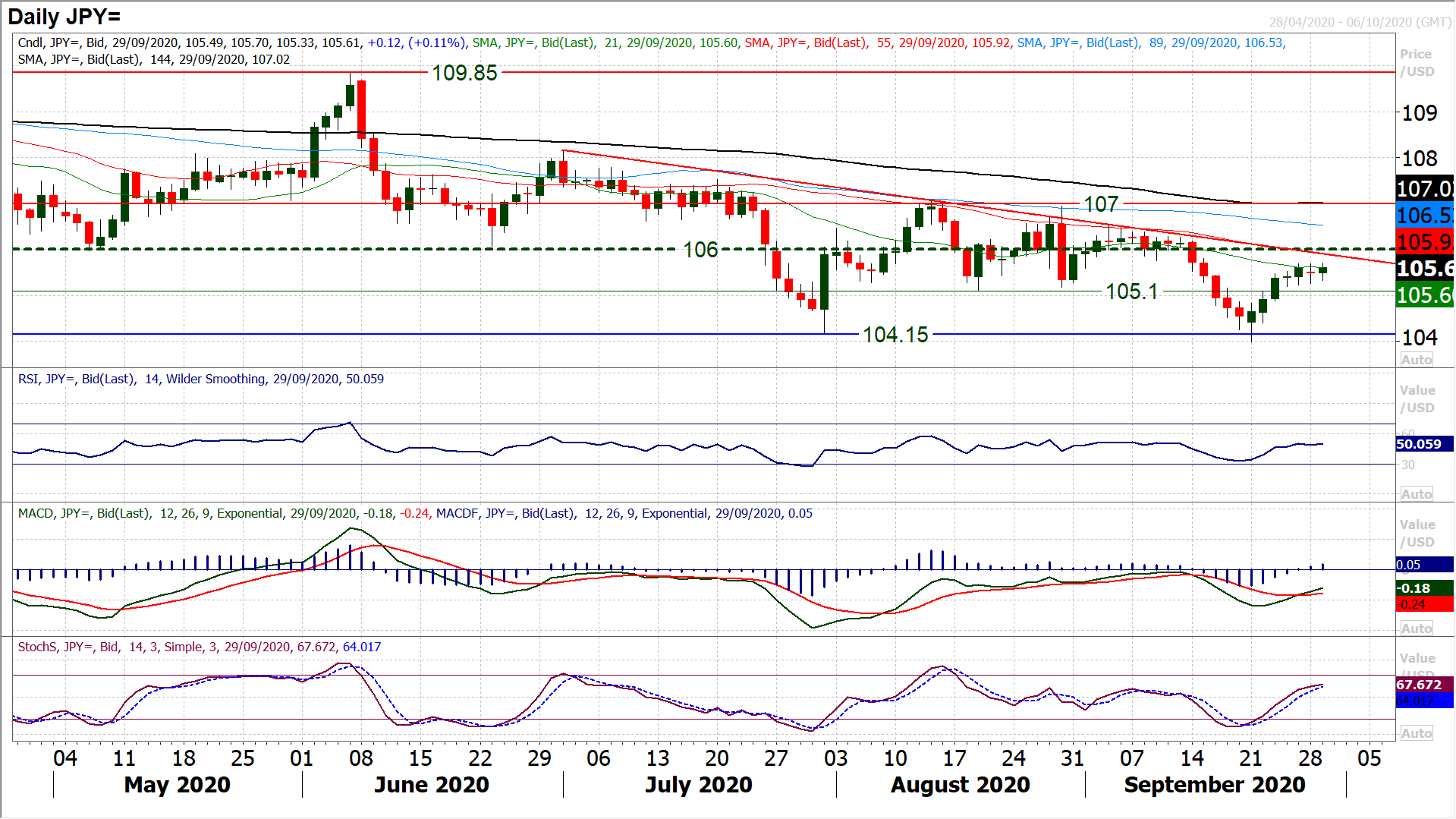 Gold has been in decisive correction mode recently, but this move has slowed in recent days. Now, having posted a “bullish engulfing” one day candlestick, the buyers are looking to bounce back. The question is whether this is a sustainable recovery. This leaves the outlook at an intriguing stage. Key supports were broken during the correction, to leave old bulls sitting in stale positions. How they respond to a rebound could be key, as a near term rally could simply be seen as a chance to close these old long positions. The daily chart shows resistance above $1902 from the old August into September range, whilst nearer term the hourly chart shows resistance around $1882/$1894. Gold needs to post a series of positive candles to improve confidence once more. Another positive candle today would help, but this resistance band needs to be broken, this means a close above $1902. The hourly chart shows holding above $1866/$1878 is needed to sustain the near term rally. A renewed bull failure today would put support at $1848 back under pressure along with the 6 month uptrend. 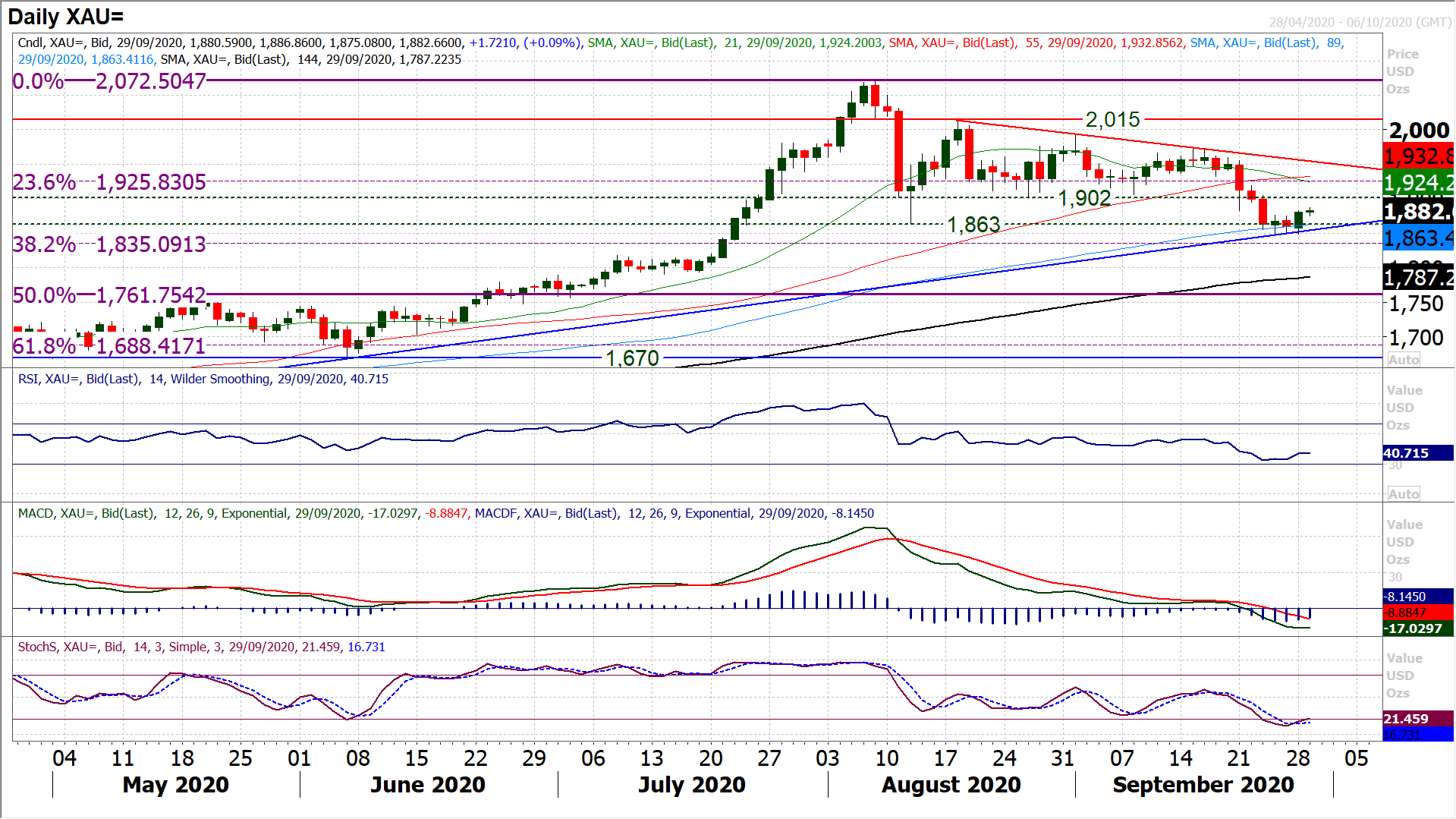 With the support of the mid-range pivot at $41.30 holding firm over the past week, there is a sense that the bulls are just beginning to feel a little more confident once more. Recent sessions have built on support to form a couple of positive candles where intraday weakness is being seen as a chance to buy. This is a market still very much in the midst of an extended range now, with a multi-month range of $37.00/$46.50. This has tightened to $39.30/$43.80 in the past few weeks, and all around a $41.30 pivot. Trading slightly above the pivot leaves a mild positive bias now. We look to use near term slips towards $41.30 as a chance to buy for pressure towards $43.80. A close under $41.30 flips to a negative bias towards $39.30. 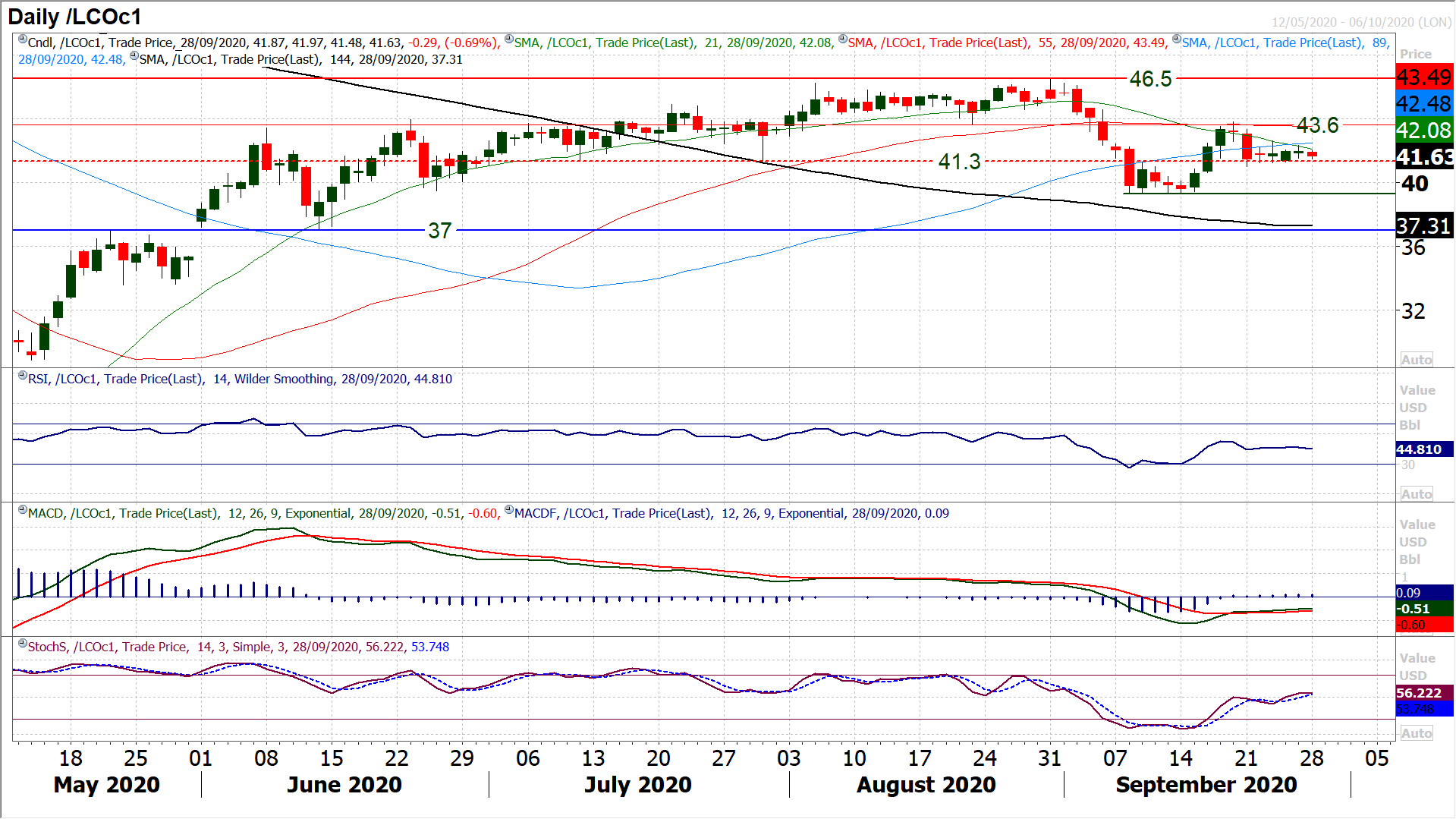 A third consecutive day of gains for the Dow and the market has pulled decisively higher. A move through the 27,465 rebound lower high from last week has improved the outlook as investors begin to position for a package of fiscal support from Congress. With the strong reaction of the past few sessions, the bulls are once more on the brink of taking control. Pulling decisively through the resistance band of 27,445/27,580 (the multi-week top neckline) would be a decisive signal. A slight pullback into the close still leaves a few question marks but futures are ticking higher again today and if the Dow can close above the falling 21 day moving average (closed last night at 27,820) then the bulls will be well in control for a test of the first lower high at 28,365. If the market also now begins to use 27,445/27,580 as a basis of support this will also add weight to the improving outlook. 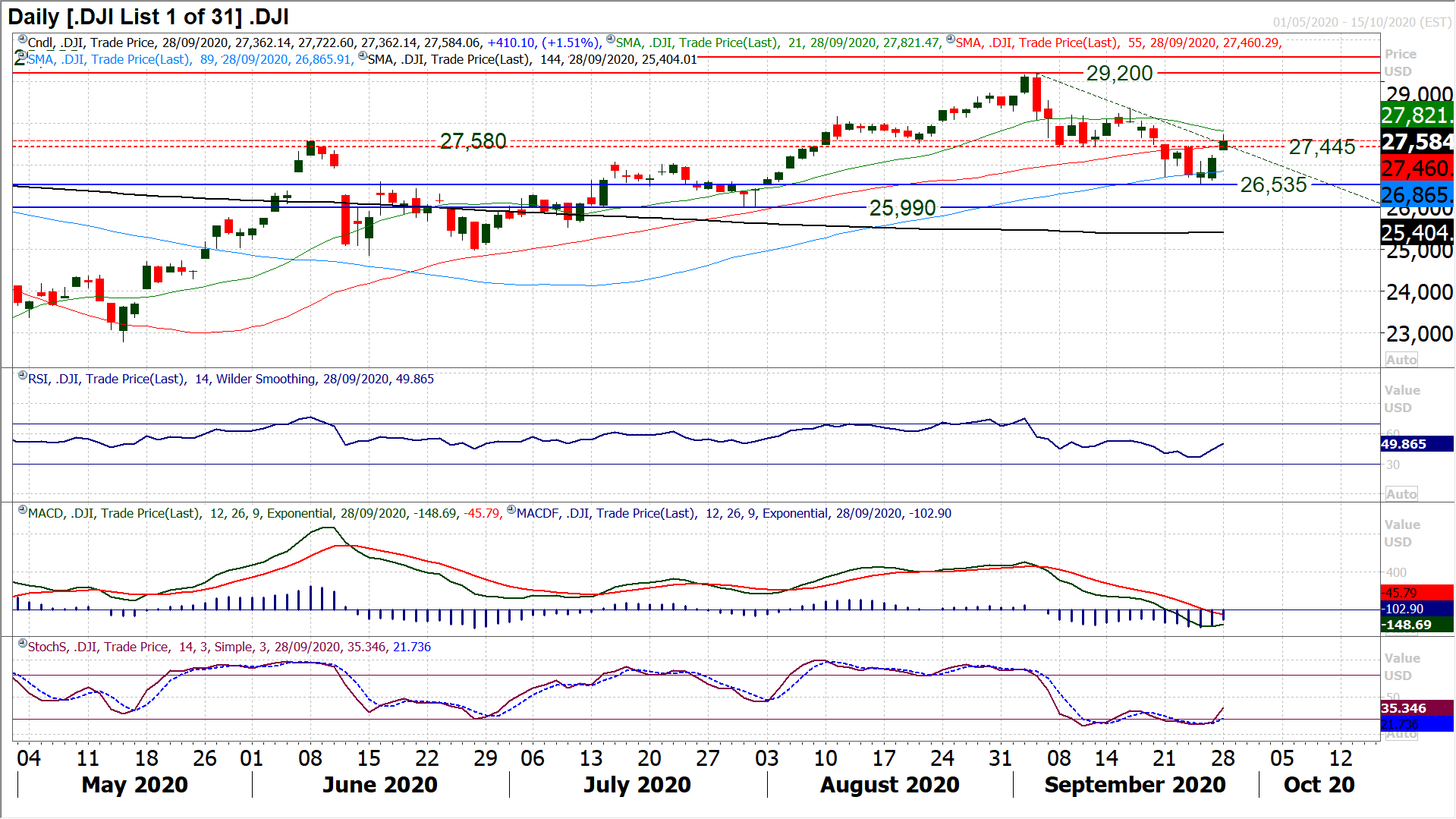