Markets react to a US tech rebound, with ECB policy meeting in focus

The wild ride on Wall Street continued yesterday as the beaten down tech sector found support for a rebound. The question will now be how sustainable is this support and whether the recent sell-off is over. The impact on broader sentiment has been significant too. A dollar rally has coincided with the recent tech sell-off, however, now with tech (and Wall Street) rebounding, we see the dollar coming off again. This is being seen through major forex, whilst gold has also ticked higher. The focus for today will again be on the path of US futures, but also looking towards the ECB policy decision. A rebound on the euro came yesterday on reports that ECB members were confident of the Eurozone economic outlook, however, will this be the stance of ECB President Lagarde today. How does the ECB react to the record low on core inflation? Also what of the strength of the euro, which induced ECB chief economist Philip Lane to concern over its impact on the Eurozone economy? There is a sense of consolidation early today. How dovish the ECB comes across will likely be another driver to the next EUR and by association USD move. 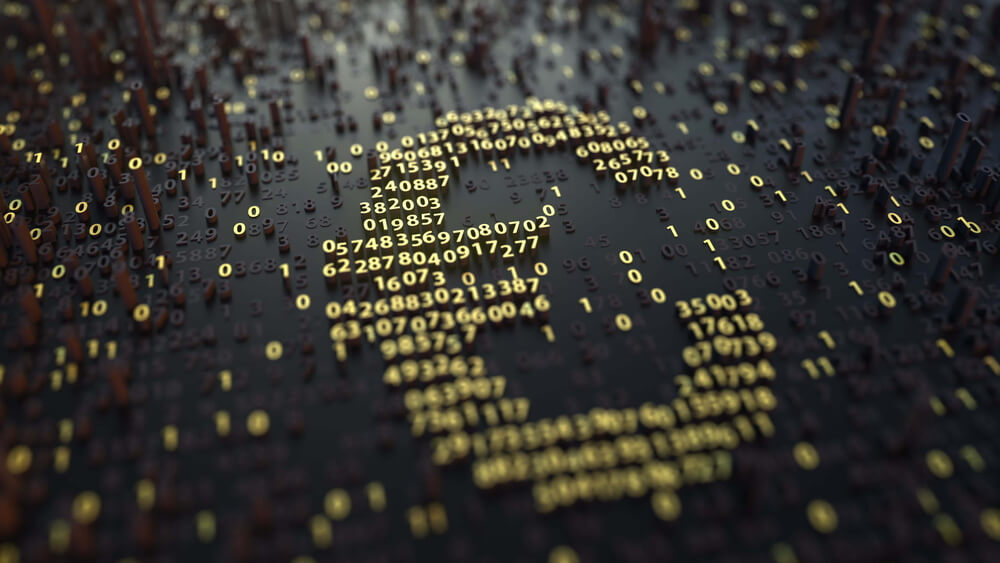 Wall Street finally started to build support again yesterday, with a rebound (tech driven) which filtered across markets. The S&P 500 closed +2.0% higher at 3399 whilst futures are ticking higher again today (E-mini S&Ps +0.2%). This has allowed Asian markets higher (Nikkei +0.9%, Shanghai Composite +0.5%) and European futures are looking mixed around the open, with FTSE futures -0.3% and DAX futures +0.3%. In forex, there is a continued unwind of recent USD gains, aside from a touch of AUD weakness. EUR is ticking higher although this comes ahead of the ECB meeting later today. In commodities, the rebound on gold and silver from yesterday is just easing back slightly this morning, however, the rebound on oil is consolidating.

The ECB meeting dominates today’s economic calendar. European Central Bank monetary policy is announced at 1245BST with no change to the main refinancing rate of 0.0% or the deposit rate of -0.50%. However, the react action will come with the assessment of forward guidance. Will an “average” inflation element be introduced? Will the PEPP purchases level be increased, and by how much? The press conference of ECB President Lagarde is at 1330BST and should also be watched for the assessment of inflation and the strength of the euro. Aside from the ECB, at 1330BST Weekly Jobless Claims are expected to improve further to 846,000 (down from 881,000 last week). The EIA Weekly Crude Oil inventories are a day late due to Labor Day and are at 1600BST with an expectation of a drawdown of -1.1m barrels (-9.3m barrels last week).

The big dollar rally and oil price sell-off has driven a big rebound on USD/CAD, but has this changed the outlook? Negative trends are being broken now, as not only a seven week downtrend but also the big near six week downtrend has now been breached by the move. However, the rebound has unwound USD/CAD into a band of resistance around 1.3240/1.3270 (the August pivot area) only for the move to fall over yesterday. That serves to increase the importance of this resistance area on a medium term basis. How the market reacts in the coming days will be key. There is so much resistance overhead from the old sell-off that this is now a significant overhead supply of sellers. If a higher low between 1.3130/1.3260 can now develop then the bulls will see this as a recovery building foundations. A move back below 1.3095 would suggest that the recovery is already faltering and a retest of 1.3040 and the 1.2990 key low is likely to be seen. 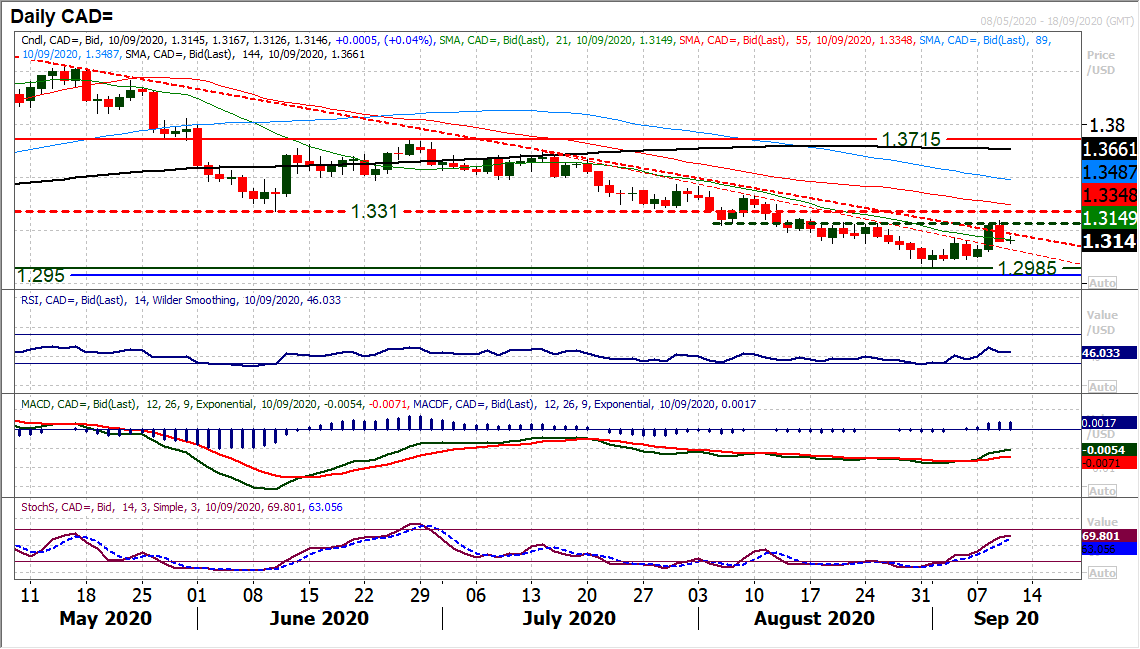 The unwinding correction on EUR/USD has been testing key supports in recent days, but for now these supports are holding. Throughout July and August, the key support area 1.1695/1.1750 build foundations for the move above 1.2000. Losing this support would be s key shift in outlook. For now it is holding, but with the confluence of the big four month uptrend (today at 1.1780) also being tested, this looks to be a key crossroads. A positive candle yesterday and early gains today seem to be coming with a stabilisation of broad market sentiment that is dragging on the dollar (helping EUR/USD higher). However, this all comes ahead of the ECB meeting today, which could drive a significant move on EUR. We expect a significant rise in volatility again and how the market reacts to 1.1695/1.1750 will be key. A closing breach (on EUR selling pressure due to the ECB being deems as “dovish”) would open 1.1500. However, holding the uptrend after today would be a significant positive for EUR/USD and the bulls can then begin to think about pressure on 1.2000 again. Initial resistance 1.1865/1.1880. 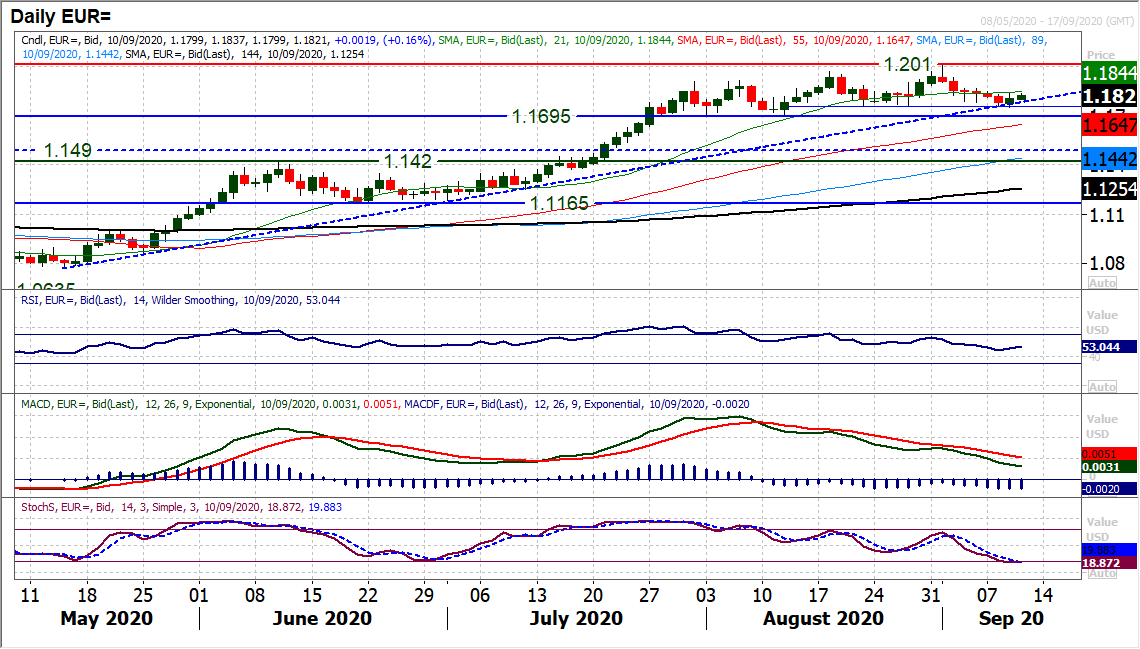 Cable is still being flung around by broad market sentiment (impacting on USD, where yesterday’s improvement drove renewed USD selling and therefore a Cable rebound) along with Brexit trade talks (impacting on GBP outlook). Both these factors are still live today and as such the outlook is uncertain. After Tuesday’s key breakdown below 1.3000 and intraday rally into the close yesterday has formed a bullish “hammer” candlestick. This is a recovery candle, but given the uncertainty of the newsflow, it is a difficult signal to implicitly trust right now. The technical outlook has been significantly harmed by the decisive break below 1.2980/1.3000 support. There is now a band of overhead supply between 1.2980/1.3055 whilst an eight day downtrend falls at 1.3130 today. Given the deterioration in momentum, we are cautious of thinking that a bull hammer just turns the market back into positive mode once more. At the least, a closing move above 1.3055 is needed now. The newsflow will continue to be a key driver of Cable (and you can add the associated reaction to the ECB decision into the mix too). Yesterday’s low at 1.2880 will grow in importance as support now. 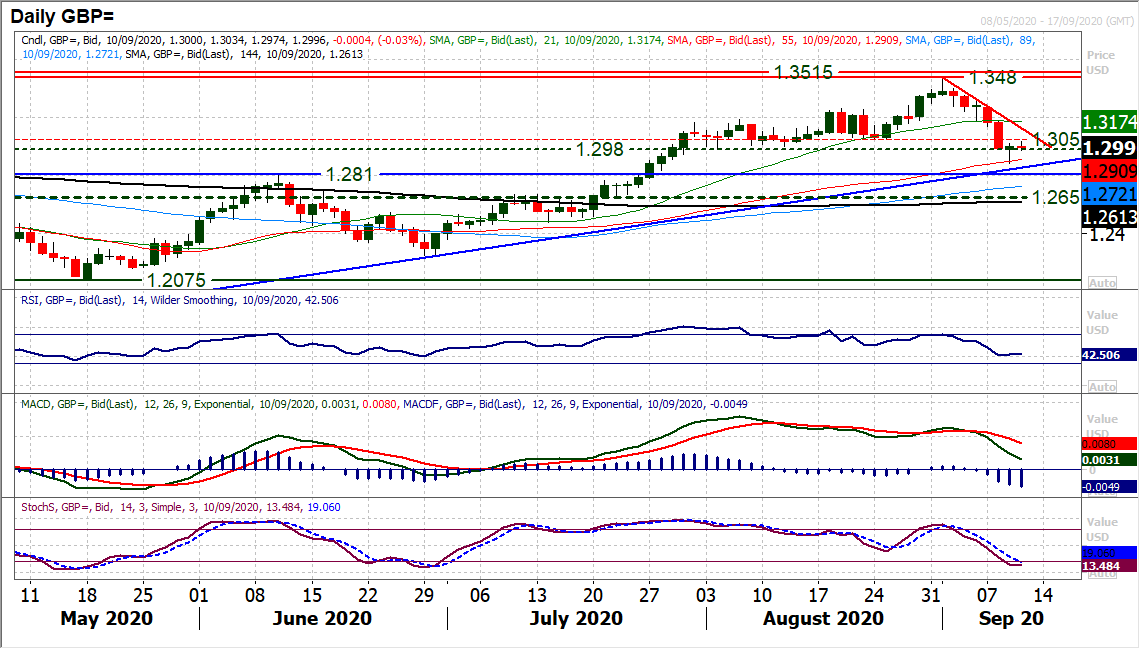 An intraday bounce into the close has once more neutralised the outlook on Dollar/Yen. A range between 105.10/107.00 is into its sixth week now and given the tendency for the market to gravitate around 106.00 (an old mid-range pivot) it is difficult to take much of a decisive near to medium term view right now. Our bias remains to sell into strength though. The old key floor for the summer months between 106/107 is now broadly resistance and a barrier to gains. The resistance also comes in with the 55 day moving average (today at 106.40) and a 10 week downtrend (at 106.35 today). However, conviction is lacking right now in the near term moves. A close under 106.00 would see our preferred test of 105.10 resume. Initial resistance 106.40/106.55. 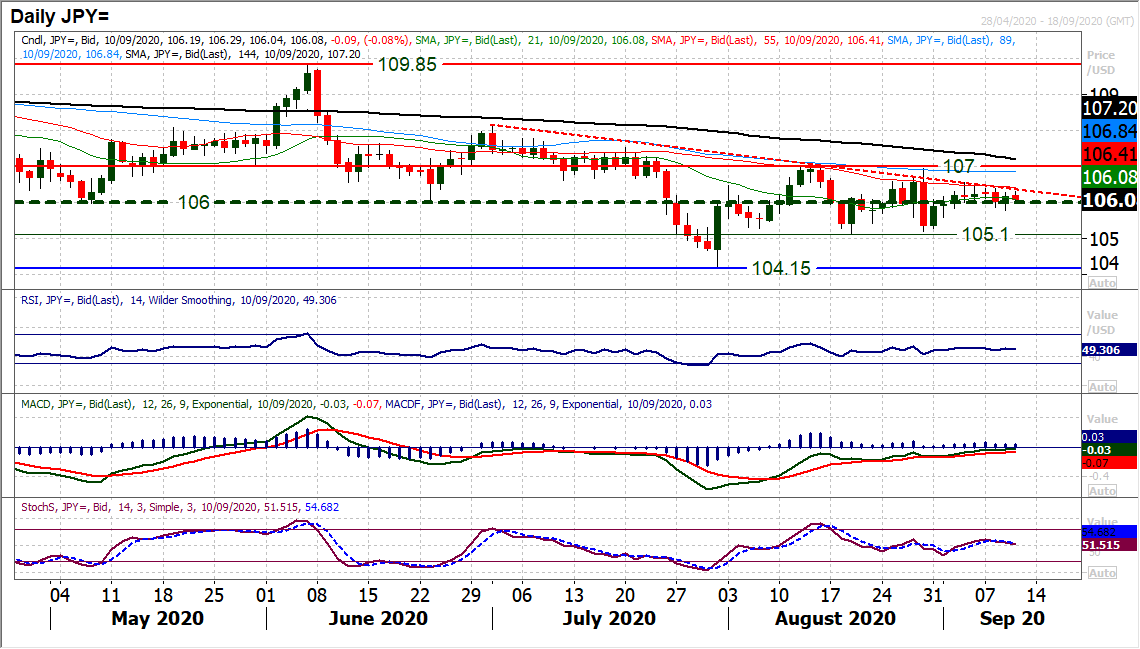 After days of pressure around the 23.6% Fibonacci retracement (of $1451/$2072) at $1926, yesterday’s positive candle has just started to pull the market higher once more. There is still a sense of uncertainty over the outlook after having breached the three month uptrend. The near term uptick has lightened the outlook for what had been looking to be a move towards a bearish breakdown. However, there needs to be a sustainable move higher now. Another bullish session today would certainly go towards doing this. We see the hourly chart above $1940 resistance which improves the outlook, but this needs to be confirmed with a decisive move back above $1955 to really suggest the bulls are pulling away from the previous period of corrective drift. This would then bring a more constructive near term outlook towards a test of $1991/$2015. It would then suggest $1902/$1920 is the basis of support in a range. The continued building of support is key for the bulls to re-assert themselves in a period of uncertainty. 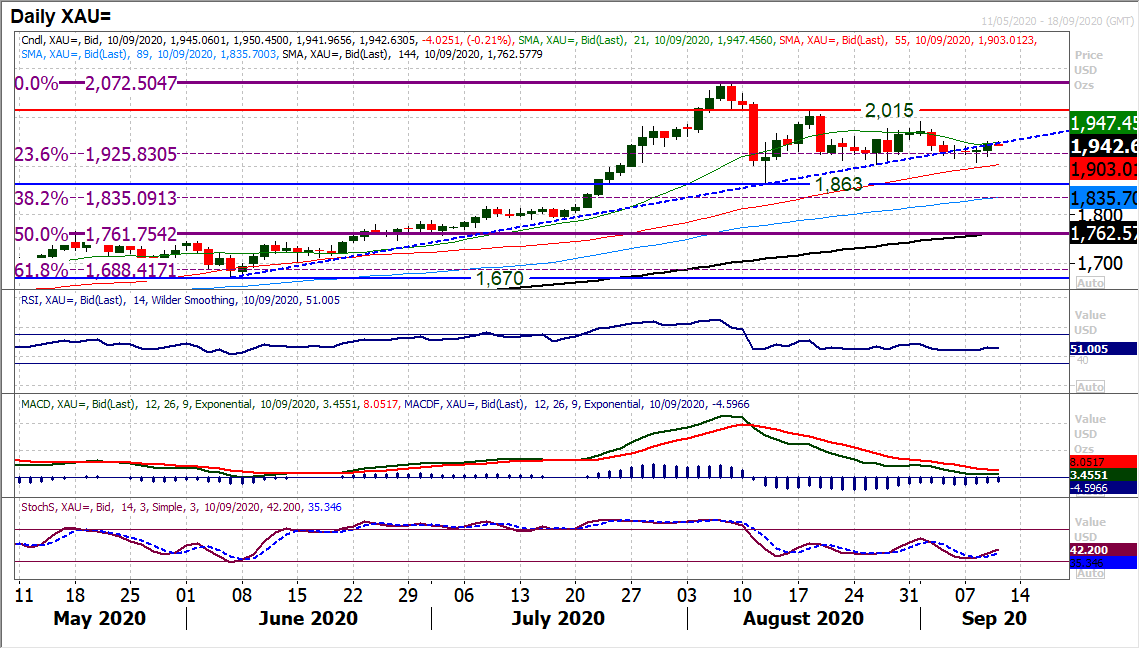 A technical rally has pulled oil into a rebound, but is it sustainable? The old support of $41.30 is now the start of key overhead supply between $41.30/$43.60. How a Brent Crude rebound reacts in this area of resistance will be key now. Yesterday’s rebound failed initially at $41.20 but a tick back higher again today suggests that there is still a chance to regain the recovery initiative. However, if the market begins to consistently fail around here then there will be key questions over the impact to the medium term outlook. Momentum indicators look to be more negatively configured now and this tends towards seeing rallies as a chance to sell now. Failure around resistance will add to this. The support at $39.30 will need to hold, but there is a potential for a retreat towards the next key support at $37.00 due to the significant bearish shift in the past week. 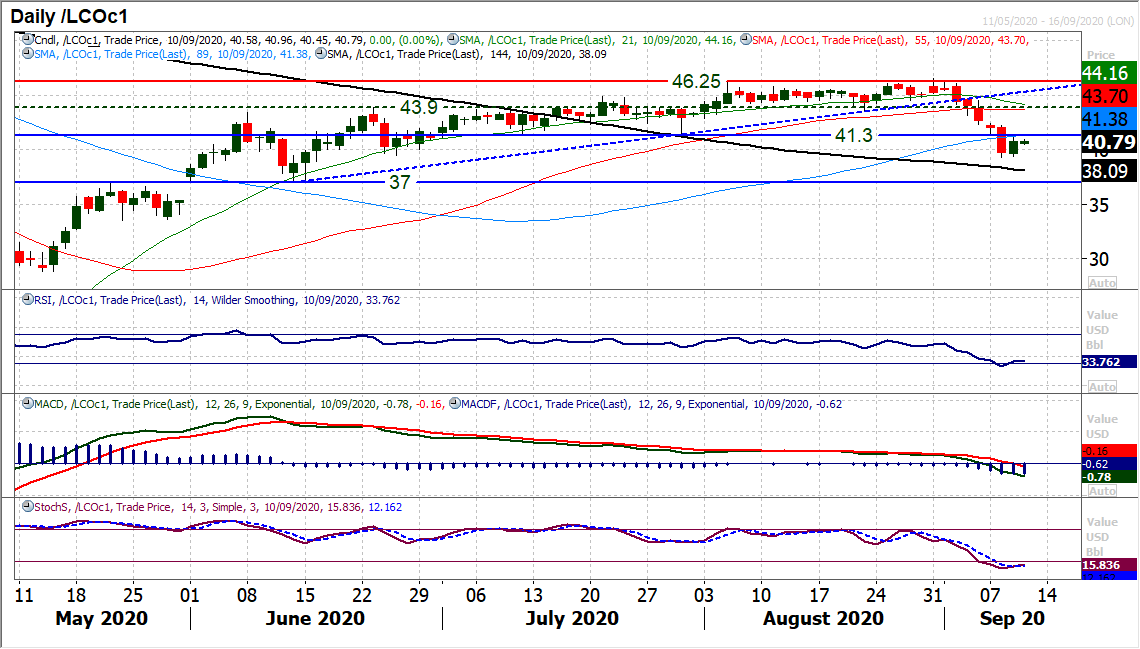 After a series of negative sessions, US markets found support for a rebound yesterday. Whether this is a sustainable move is likely to be down to the sustainability of support for the tech sector after the huge recent rout. For the Dow, the big medium term trends and supports have come under huge pressure, but are arguably still a factor. Despite being breached on a closing basis during Tuesday’s session, the five month uptrend and breakout support at 27,580 will still be factors due to the instant rebound. If the market can now build from 27,465 as support then the bulls can rebuild their shaken confidence. There is a basis of near term resistance at 28,000 which is now a gauge, being an old pivot. The market failed to close above there yesterday, so this needs to now be overcome on a closing basis. There is a degree of volatility that is also still to settle down too. The positive candle from yesterday suggests an appetite to buy remains, but this needs to continue and hold above 27,465 otherwise a near term unwind will become something much more significant. Above 28,000 opens 28,730. 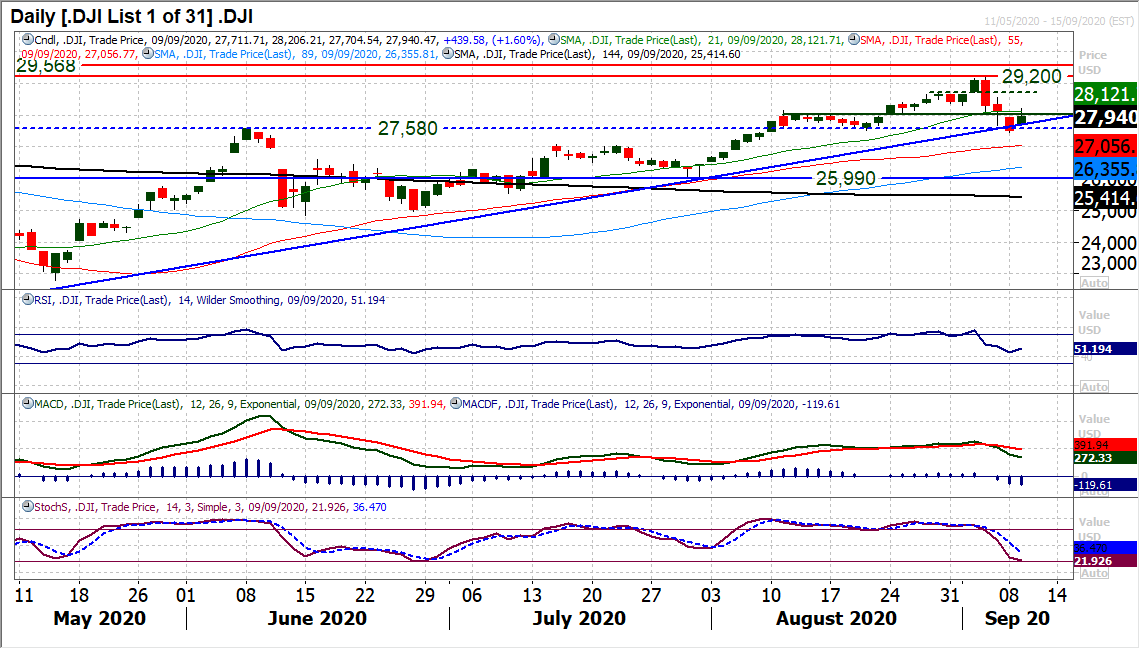