There is a slight edge of risk aversion creeping into markets this morning. Perhaps this has something to do with President Trump going ahead with signing an executive order to ban Chinese apps TikTok and WeChat. Furthermore, the negotiations between US Democrats and Republicans over the composition of a US fiscal support package rumble on without any agreement. All the while, the millions of US unemployed workers due to the pandemic economic restrictions now suffer from a cliff-edge of expired support. The market impact is seeing a mild improvement for the US dollar today, whilst equities are stalling their rally and even the bull run on gold is consolidating. This could also be as much to do with the anticipation of the July US employment report, with a risk that Nonfarm Payrolls could disappoint. After record month on month job gains from June, trends for July look less encouraging as swathes of the US were required to reinstate restrictions as COVID-19 infection rates soared. The China trade surplus grew enormously overnight as exports increased by +7.2 way ahead of forecast and imports fell by -1.4% which was lower than forecast. This has done little to improve sentiment in the Asian session which hands over mild risk aversion to the Europeans. 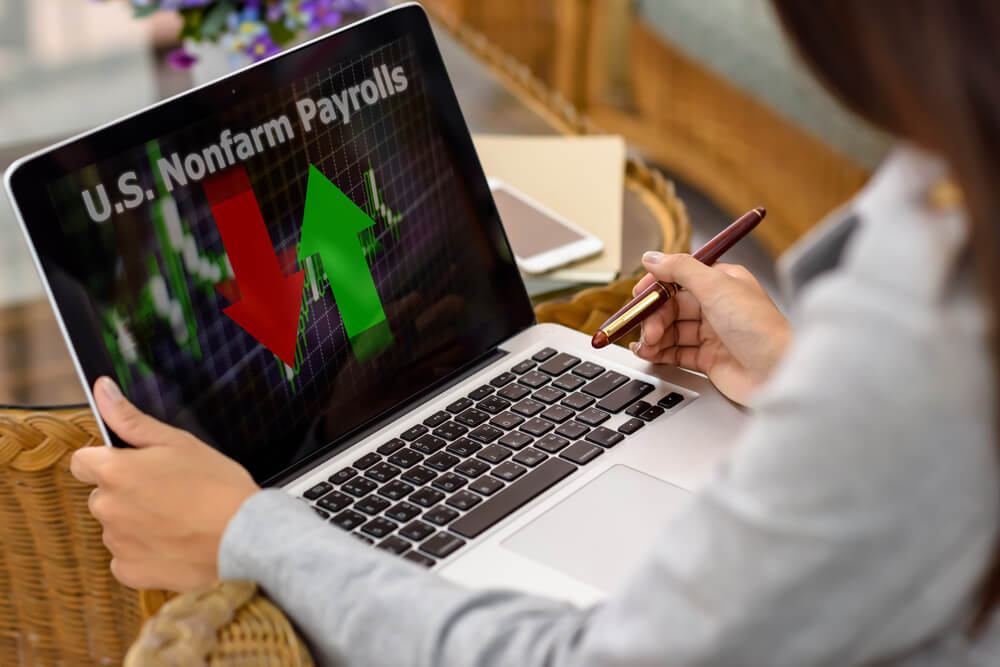 Wall Street closed higher yet again last night with the S&P 500 +0.6% at 3349 now less than 2% off its all time highs. US futures are though giving back some of these gains today with the E-mini S&Ps -0.3%. Asian markets reflect this slip back with the Nikkei -0.4% and Shanghai Composite -0.6%. European indices are looking a touch cautious today, with DAX futures +0.1% and FTSE futures again lagging -0.1%. In forex, we see a mild rebound on USD forming, with most major currencies around -0.3% weaker on the dollar in early moves, with just the safe haven JPY holding up. In commodities, slightly weight by a dollar bounce we see silver has unwound by -2% in early moves, whilst gold is around -$4 or -0.2% weaker as the bull runs consolidate. Oil is a shade lighter just under half a percent lower.

Traders will have key focus on the payrolls report which dominates the economic calendar today. The US Employment Situation is at 1330BST and is expected to show the headline Nonfarm Payrolls growing by +1.600m jobs in July (down from the record +4.800m growth in June). Consensus has US Unemployment falling to 11.1% (from 12.3% in June), whilst Average Hourly Earnings are expected to decline by -0.5% on the month leaving the year on year growth at +4.2% (down from +5.0% in June).

If you think that equities are having a great time of it right now, spare a thought for FTSE 100 traders. Not all indices are performing well, and the underperformance of FTSE 100 is reaching near legendary status. The S&P 500  may be within sniffing distance of all-time highs, but FTSE 100 is a simply gargantuan laggard, languishing between 38.2% to 50% Fibonacci retracements of the January to March sell-off.  The 50% Fib retracement (of 7690/4899) at 6295 has become a huge barrier in recent weeks, and the market has now built a two week downtrend of correction looking set to put pressure on support. Yesterday’s decisive bear candle has reaffirmed the corrective momentum that has built up once more. With early losses this morning, the 38.2% Fib at 5965 is a key level to watch, and a closing break of the support would confirm an implied corrective target of around 5600. Initial support is Monday’s low at 5857. Although FTSE 100 is not outright bearish right now (seemingly lamely propped up by positive outlook elsewhere in global markets) the underperformance does not bode well if there is a shift in broad market sentiment. Resistance at 6110/6150 is building overhead. 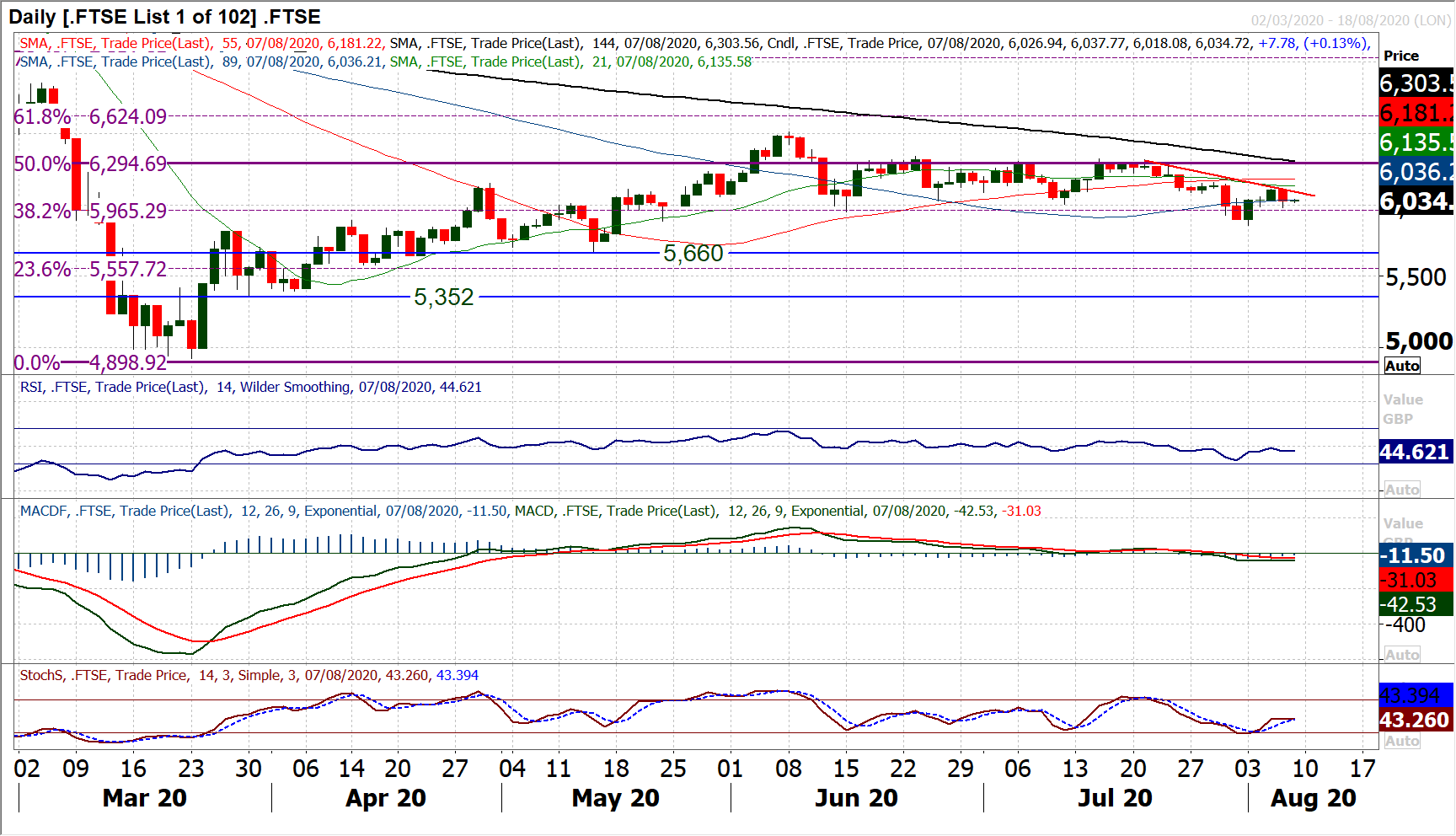 The pair has been painting a less certain picture in the last couple of weeks. Initial pressure on support around 1.1700 left an important near term support on Monday, but there has now been three attempts at moves above 1.1900 which have faltered. Yesterday’s move extended the multi-year high (dating back to May 2018) to 1.1915 only to fall back once more. The market has begun today’s session looking lower once more. Is this a pause in the bull run, or a potential reversal building? With the accelerating run higher, we have been drawing in ever sharper uptrends. The latest one is a near three week uptrend which comes in around 1.1810 today. An early slip has tested it but it remains intact. Slightly further back is a four week uptrend at 1.1725 today. If these trend begin to be breached then the questions over bull control would be raised. We are now beginning to see hints of faltering momentum, with very marginal negative divergence on daily RSI. This is all coming ahead of the Nonfarm Payrolls report today which is likely to see elevated volatility on the pair. We would be watching the 1.1800 pivot support for signs of potential corrective pressure building. Resistance is still 1.1910/1.1915. 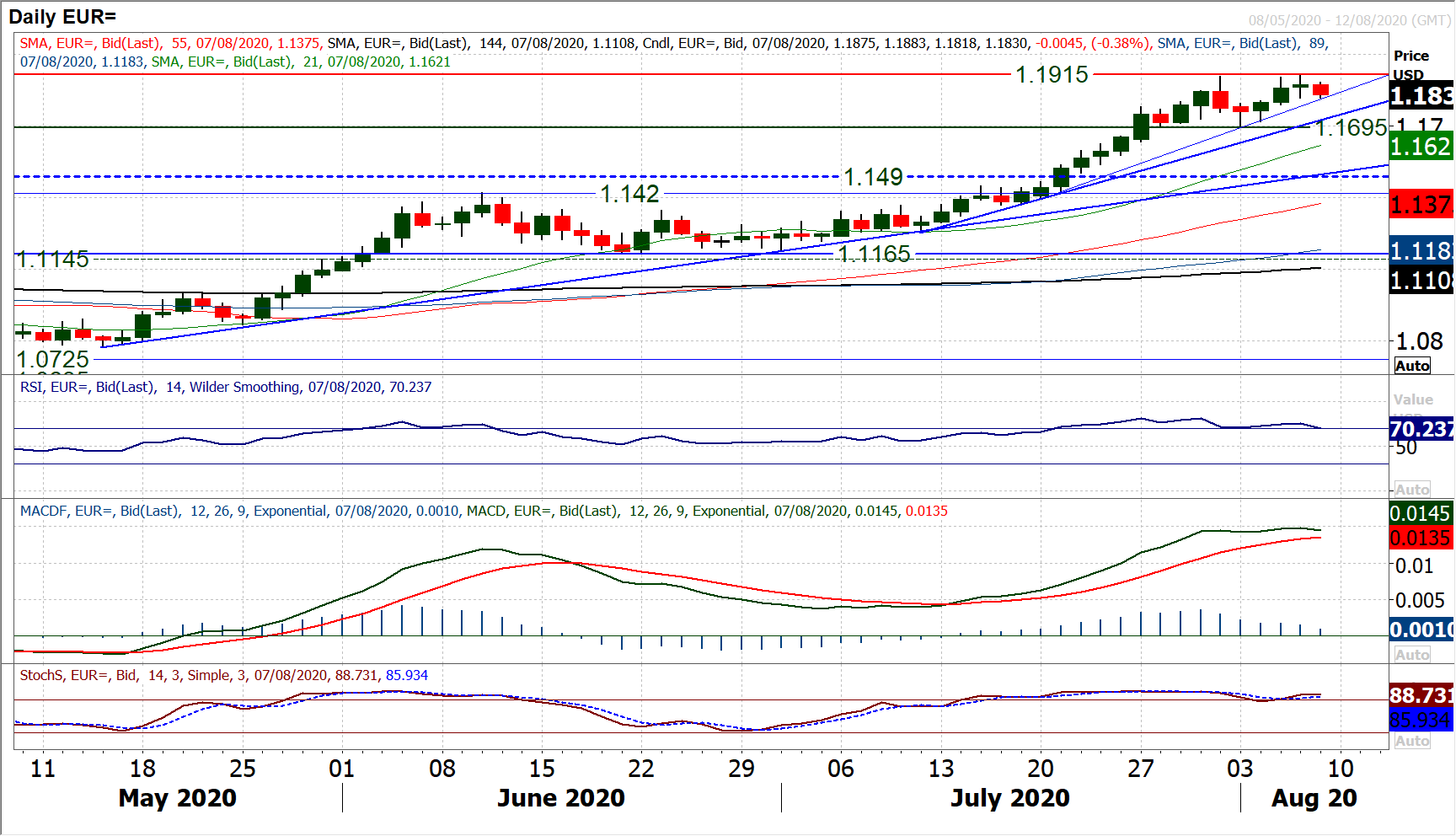 After such a strong run higher, inevitably the questions will be asked of just how far the bull run can go. Similar to the outlook for EUR/USD, there was a failed breakout yesterday when Cable moved above 1.3170 only to flounder at 1.3185 and to turn back. The fact that this is coming just under old key resistance around 1.3200 will be a concern for the bulls. This morning we see the market trading slightly lower and putting pressure on an almost three week uptrend. However, still there are no real exhaustion signals to be seen yet on incredibly strong daily momentum. The hourly chart is beginning to suggest a ranging outlook forming. There is a near term pivot around 1.3100 will be seen as a gauge moving into the payrolls data later today. Under 1.3100 the bull run begins to look a little less secure, however, would not turn corrective until a break under 1.2980. The bulls would certainly have eyes on a test of the resistance around 1.3200/1.3215 which is a band were key highs of January and March formed. 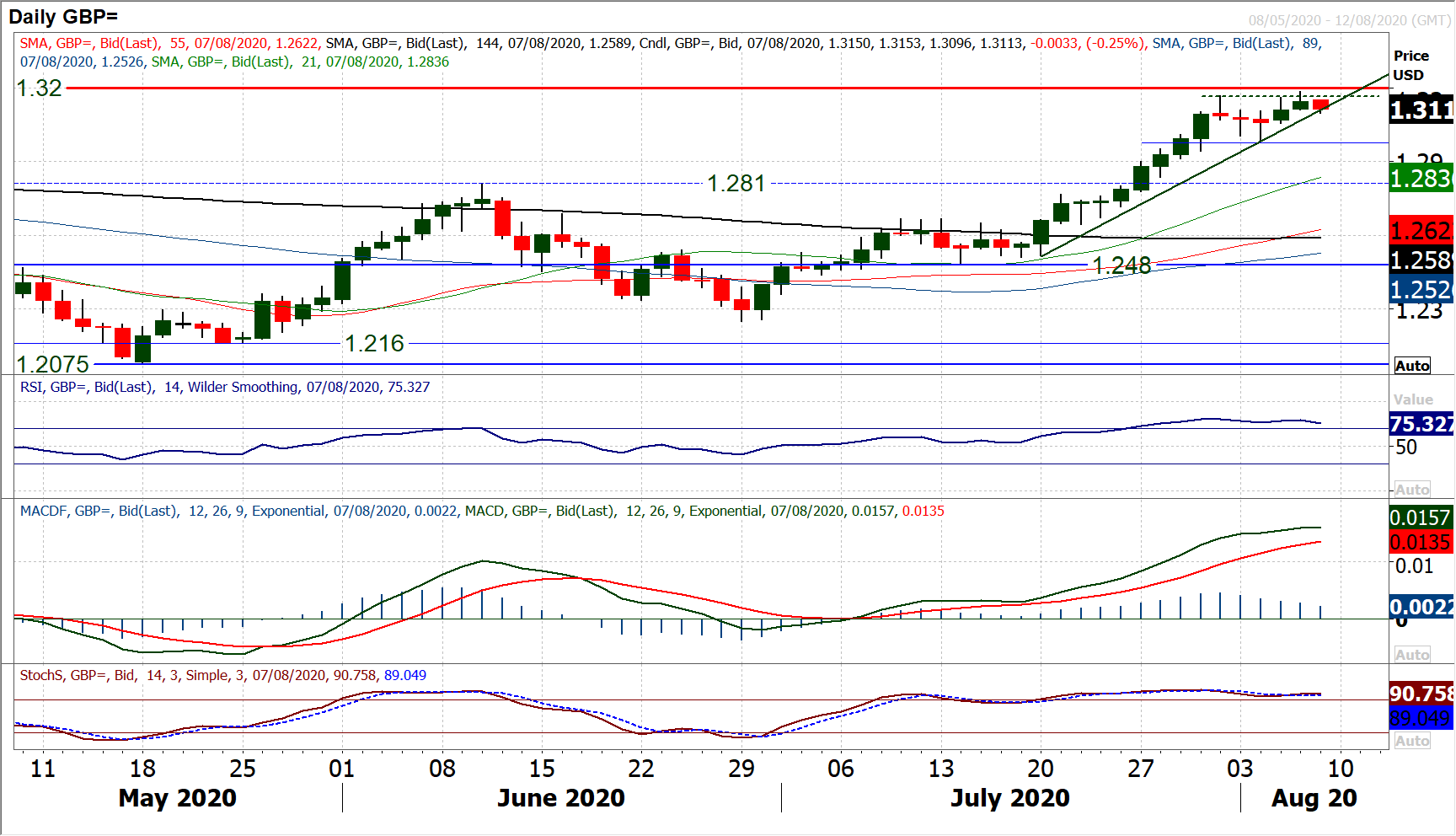 The resumption of the near term selling pressure is easing slightly as we approach the Nonfarm Payrolls report. The bull failure in the 106.00/106.60 band of overhead supply is still a key factor in the outlook, but after the market consolidated into the close last night there is a sense of the market waiting for the next signal now. The hourly chart has broken a mini-downtrend and it is interesting to see that an old breakout of 105.30 is holding as initial support in recent days. We do not anticipate this consolidation will last too long though, with payrolls today and newsflow on the US fiscal support package likely to be a key driver of dollar sentiment in the coming days. A decisive move below 105.30  would be a near term negative break and re-open a test of 104.17. There is still very much a negative bias to be overcome now. A near three week downtrend falls at 106.10 today, and the key resistance band 106.00/106.60 weighs heavy overhead. We still look to use any near term strength as a chance to sell for a retest of the 104.17 low and potentially below in due course. 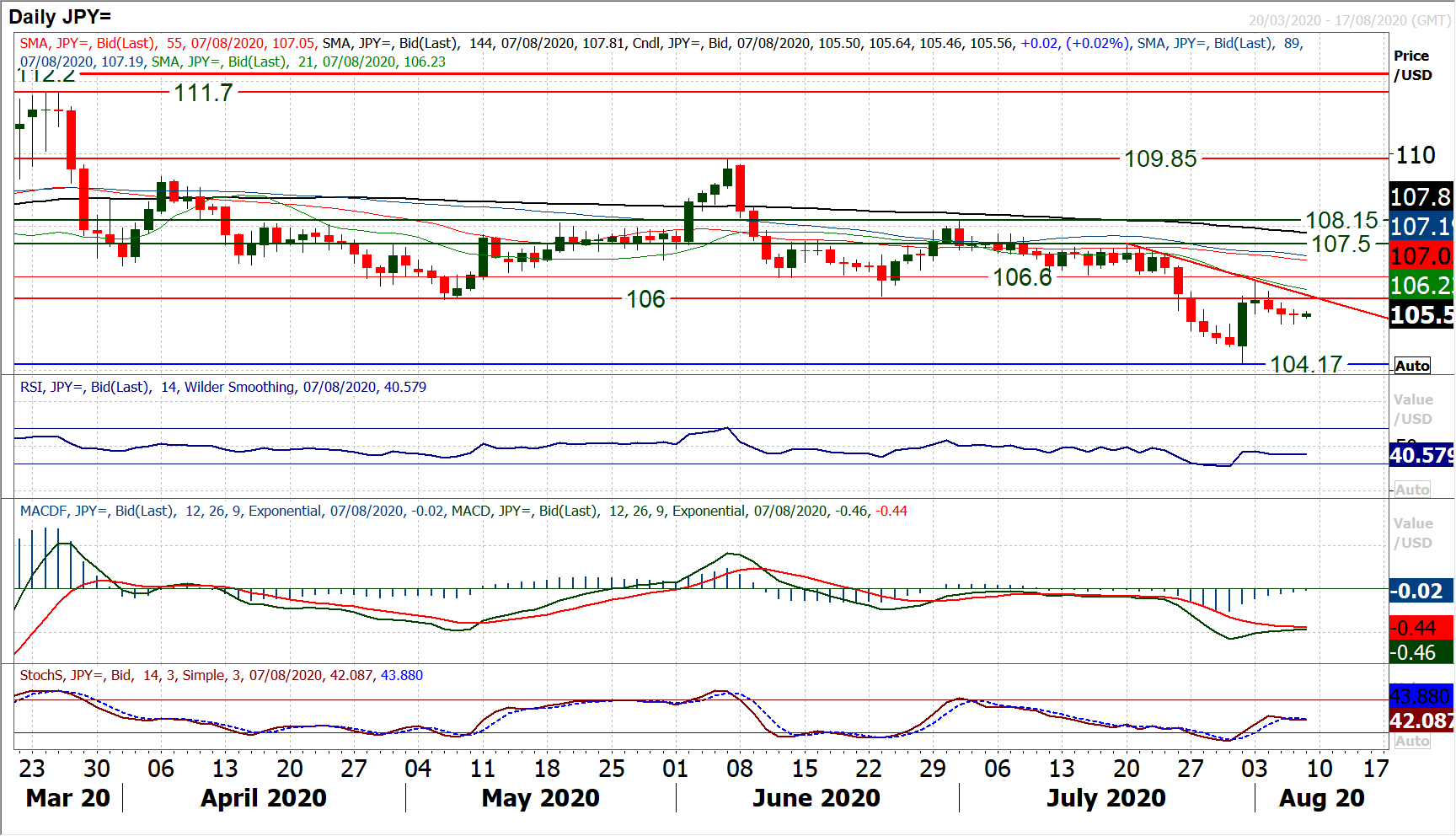 Calling the top in a market that is so strong and continues to push ever higher into new high ground is a task fraught with difficulty. Aside from daily momentum indicators remaining incredibly strong, gold continues to post strong bull candle after strong bull candle. There is a degree of consolidation forming this morning, but this can often be seen in front of Nonfarm Payrolls. The RSI is still at record levels in the high 80s, whilst there is nothing on daily MACD or Stochastics which suggests any slowing or impending reversal. However, there is no getting away from the fact hat gold is extremely stretched and the risk of a significant correction (as the elastic snaps back) is mounting. There are signs of something brewing on the hourly chart though. We mentioned yesterday the development of small negative divergences on hourly momentum. These signals are growing, especially on hourly RSI where there has been a “failure swing”. The initial support this morning at $2048 needs to be watched now. A mini top formation would form below $2048 and imply a test of the pivot at $2029 support. The overnight high of $2072 is now the all time high and is initial resistance. 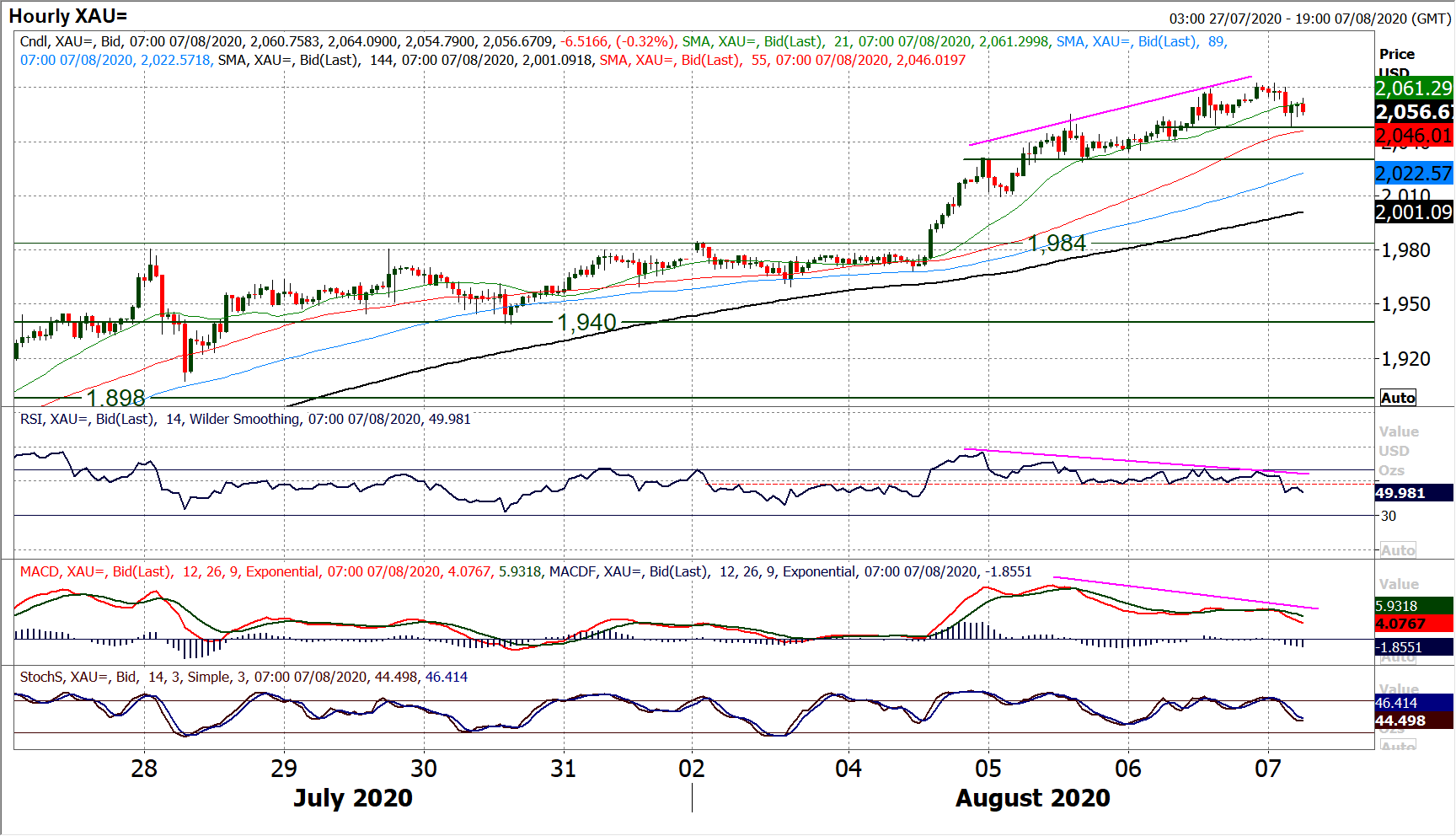 Even when it looks as though the bulls are breaking clear, there is still something holding them back. Moving above $44.90 has been a key move in recent sessions, and despite intraday moves above $45.20, the bulls just cannot confirm the upside move. Subsequently, with the market closing the last two sessions just under $45.20 (the old key bear gap from March), it means that he gap remains “filled” but not “closed”. This would certainly be a concern for the bulls were the market begin to fall away from here. With a mild drift lower this morning, it puts added importance now on the support band $42.90/$44.90. With Stochastics rolling back over, the near term breakout momentum is being lost. Yesterday’s small negative reflects this. However, taking a step back, in the past two months, this sort of constrained upside break is fairly typical of Brent Crude. A small move higher before a retracement into support gives a better opportunity to buy. Higher lows are still all intact since the recovery began in April. The rising 21 day moving average (around $43.70 today) is still a good basis of support. Resistance is now at $46.25 and $45.70 initially. 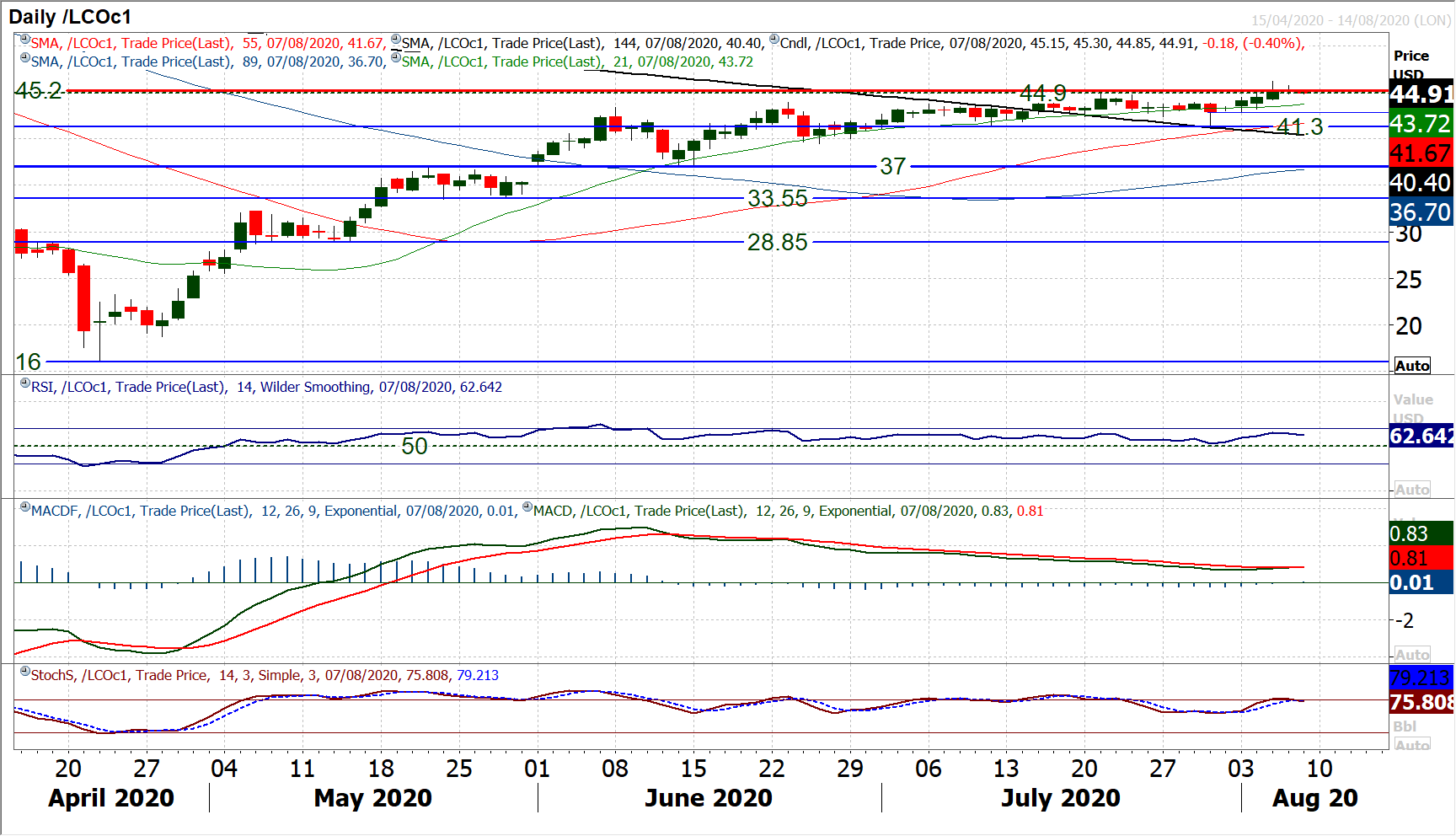 Another session of solid buying pressure has taken the Dow higher once more. Trading decisively clear of the old July high of 27,070 has re-opened the key June recovery high of 27,580 and the Dow is one more solid positive session away now. Momentum indicators confirm the continued improvement, with RSI into the mid-60s (the highest since that June peak) whilst MACD and Stochastics also rise encouragingly. Futures are initially lower this morning, but any weakness will continue to be seen as a chance to buy. The latest breakout is now supportive at 27,070 whilst hourly chart shows support 27,090/27,190 to use as an initial support buffer. We would look for renewed buy signals into supported weakness. 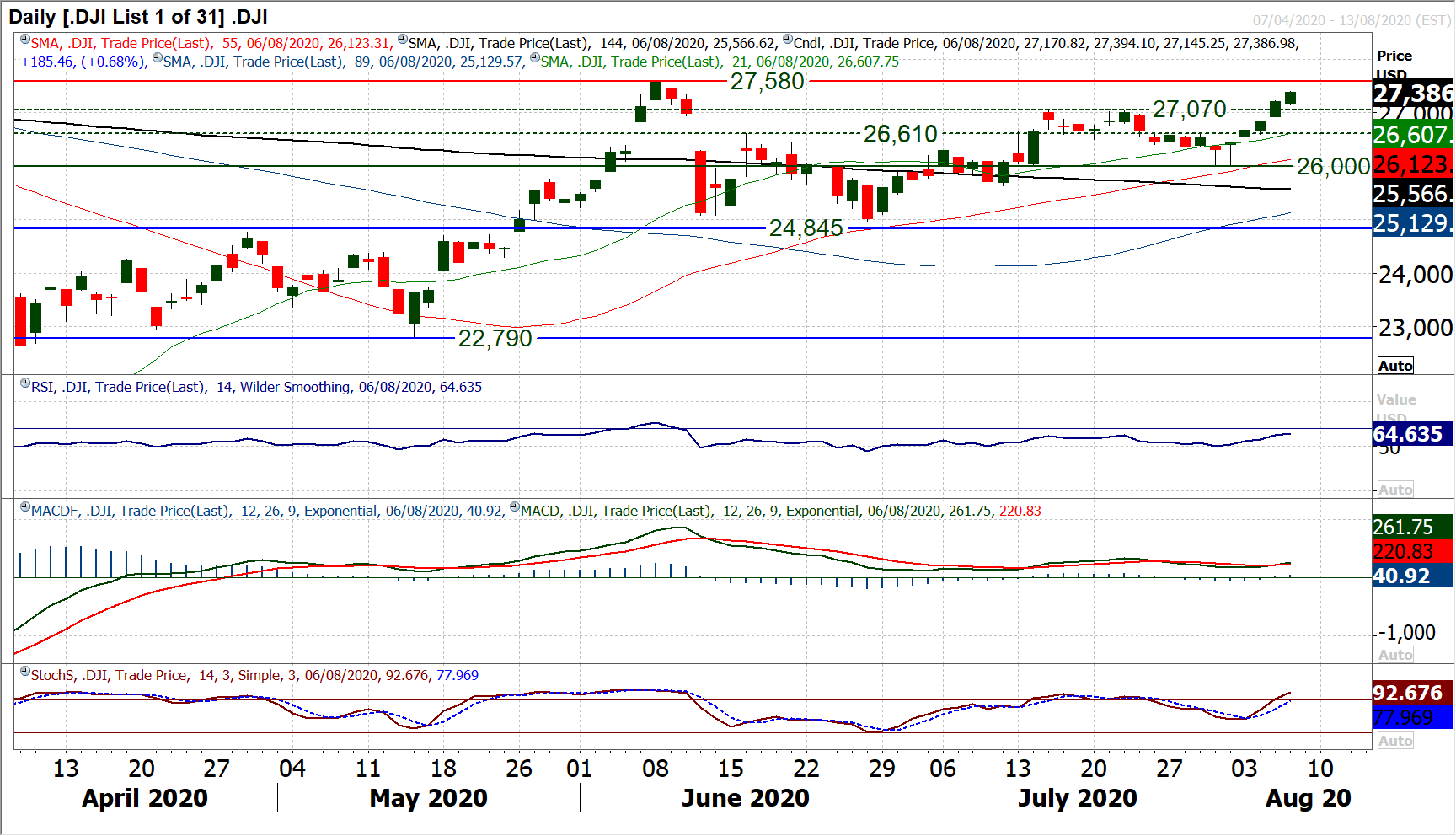