In the wake of Fed chair Powell’s speech at Jackson Hole, markets have had a few weeks to position for a new dovish paradigm of FOMC monetary policy. As part of its new average inflation targeting policy, yesterday the Fed statement says that it will “aim to achieve inflation moderately above 2% for some time”. It was a high bar that the Fed needed to overcome for renewed dollar weakening. It appears that they have missed it. In not defining the “time” (either with a level or length of time) this led to a couple of dovish FOMC members dissenting the move (Kashkari and Kaplan). Although the FOMC dot plots suggest rates are on hold at least until 2023, the market took this as not hitting dovish expectations. The dollar has notably strengthened across the forex major pairs as a result, whilst Wall Street has slipped back. This Fed meeting certainly does not change the narrative of looser for longer, but for now, there is a kick back and potential near term short covering dollar rally. It will be interesting to see how long this lasts before the medium term dollar correction resumes. Resistance at 93.50/94.00 on Dollar Index is key.  The Bank of Japan as expected has left rates unchanged at -0.1% and the 10 year JGB target yield of 0%. The yen has held up well on the back of this amidst a strengthening dollar. Traders will also be looking out for how dovish the Bank of England leans today. 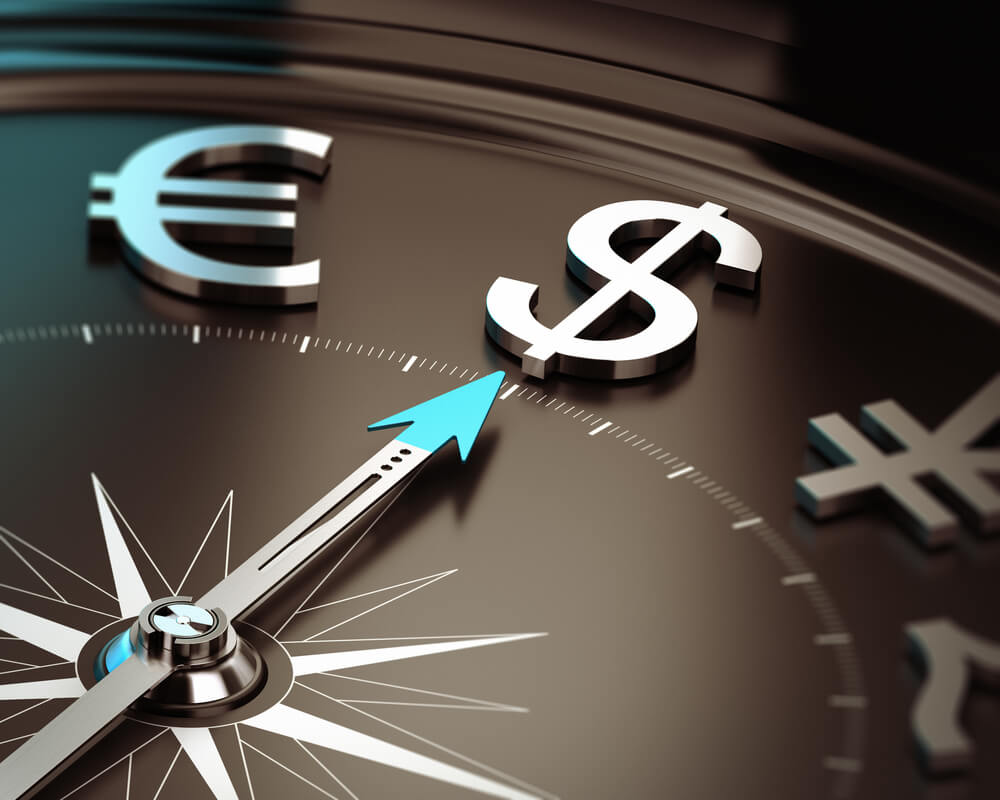 Wall Street fell back into the close in the wake of the Fed last night with the S&P 500 -0.5% at 3385. US futures are also falling early today with the E-mini S&Ps -1.0%. This has weighed on Asian markets with the Nikkei -0.6% and Shanghai Composite -0.5%. In Europe, markets seem to be following the same line as US futures, with FTSE futures -0.8% and DAX futures -0.9%. In forex, there is a near term USD rebound underway forming, with a degree of risk aversion setting in too. Commodity currencies are under pressure with AUD and NZD the main underperformers, whilst JPY is holding up relatively well in the after the BoJ. In commodities, the dollar rebound is weighing on gold (-$15 or -0.8%) and silver (-1.7%), whilst oil is also giving back some of the recent gains, around -1.5% lower.

After the BoJ overnight, there is one more major central bank on the economic calendar, with the Bank of England announcing monetary policy, along with a smattering of US data too. First up though is the final reading of Eurozone inflation for August. After the surprise move to headline deflation, Eurozone headline HICP is expected to remain at -0.2% (-0.2% flash, +0.4% final July), whilst Eurozone core HICP is expected to remain at +0.4% (+0.4% flash, +1.2% final July). The Bank of England is announcing monetary policy at 1200BST which is expected to once more be kept steady, with the interest rate of +0.1% and asset purchase stock at £745bn. The vote on rates is expected to be unanimous. The US data is all released at 1330BST with the Weekly Jobless Claims expected to once more reduce, to 850,000 last week (from 884,000 previously). The Philly Fed Business Index for September is expected to drop slightly to +15.0 (from +17.2 in August). US Building Permits for August are expected to improve by +2.5% to 1.52m (from 1.48m in July), whilst US Housing Starts are expected to decline by -1.2% to 1.48m (from 1.50m in July).

The DAX has been all rather sluggish in recent sessions, but the broad positive outlook is still in place to buy into weakness. The failure to push forward when Wall Street has looked to rebound has been a concern, but also the lack of tech exposure in the index components means there is a degree of insulation to the downside too. There is still a positive bias to look at near term DAX weakness as a chance to buy. Futures point to another slip lower today, but this should provide the next opportunity. The bull run may not be smashing the lights out, however, it is all still positively configured on a medium term basis. The important support band is 12,630/12,800. Although the positive traction has been lost recently, the market will still be looking at any near term pullback towards a three month uptrend (currently around 12,960) as a chance to buy. The rising 55 day moving average has also caught recent corrections, and is a basis of support at 12,886. We favour buying into supported weakness towards 12,960/13,115 for pressure on 13,460 in due course. We also are also still looking towards a full retracement to the all-time high at 13,795 in due course. Below 12,630 would be an outlook changing move now. 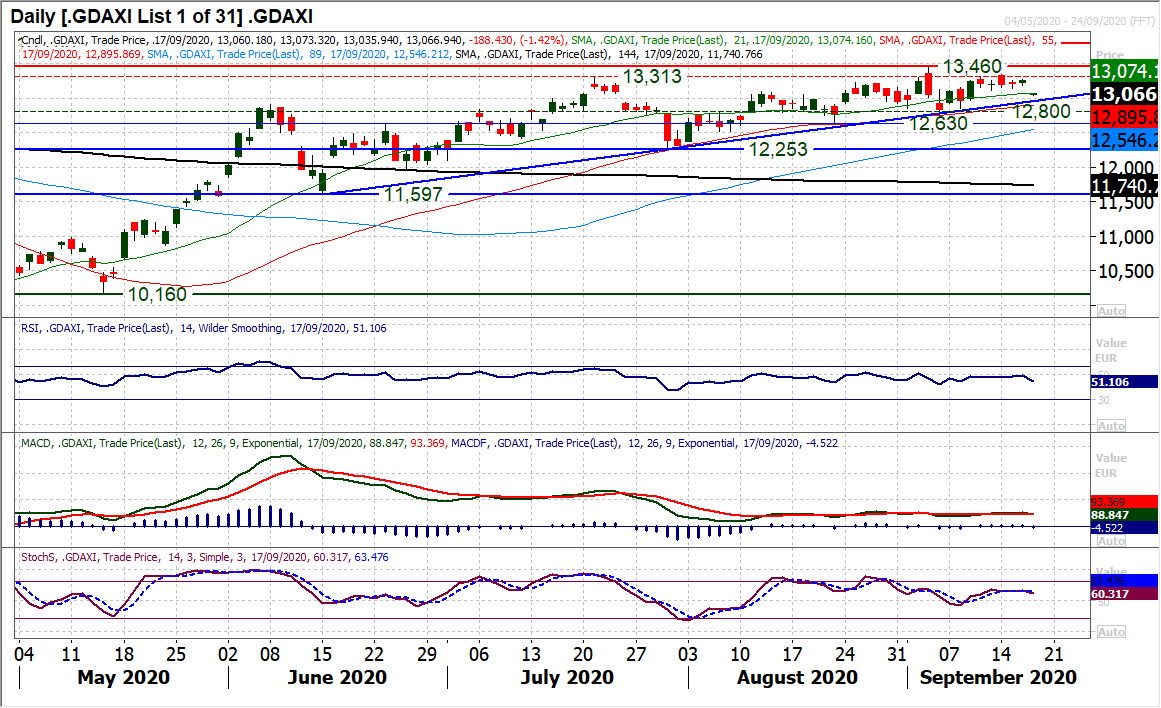 Reaction to the dovish Federal Reserve announcement would suggest that the short USD trade (which has driven EUR/USD higher) is a little tired. The resulting dollar rebound has dragged EUR/USD lower in a move that continues today. The bullish medium term outlook on EUR/USD is coming under growing pressure now. Breaking the four month uptrend (which is at 1.1825 today) the key medium term support band 1.1695/1.1750 is now coming under threat. We have previously noted that a close below 1.1750 would be a deterioration, but only below 1.1695 would be the confirmation of the strong euro position. Technical momentum indicators suggest that this is a move that is close to turning what is, for now, a trading range (between 1.1695/1.2010) into a top pattern. How the bulls respond to 1.1750 could be key to this. The hourly chart shows a failure of 1.1810/1.1825 in the wake of the FOMC decision which is now initial resistance to overcome. Continued failure under there would increase downside pressure on 1.1695/1.1750. A close under 1.1695 opens the 1.1500 area. 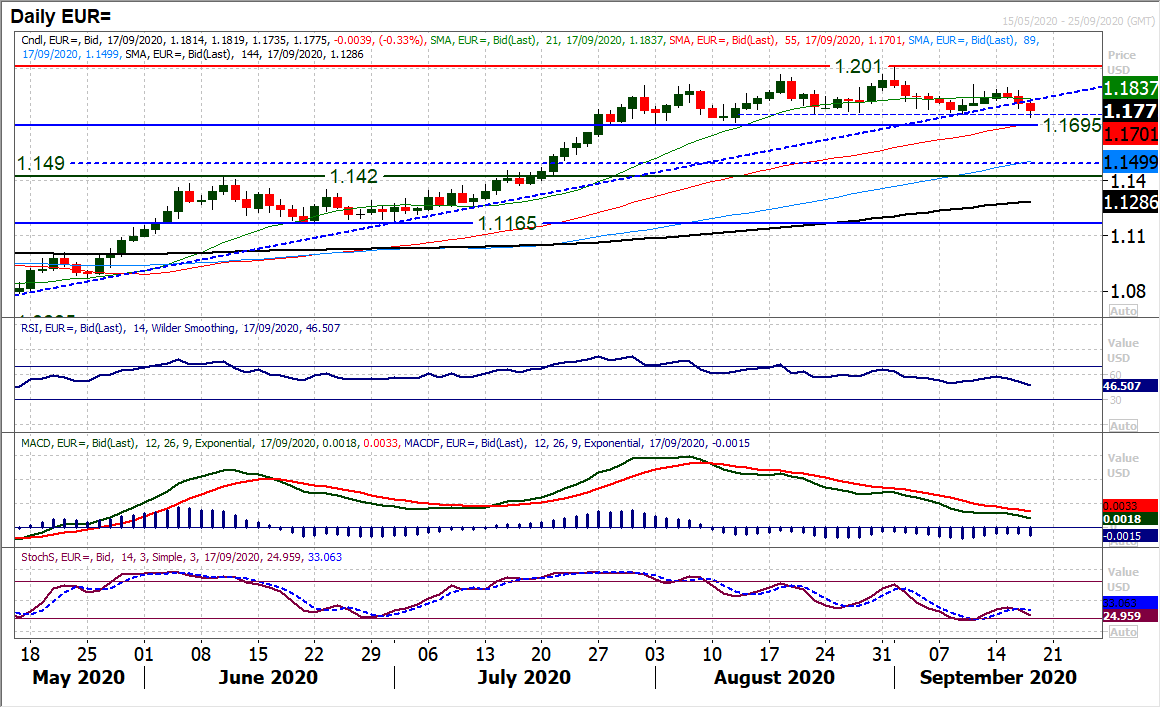 The Cable rally has just begun to stall in the wake of the FOMC decision. Technically, we have been talking about the importance of the resistance band 1.2980/1.3050 and with the market turning back from yesterday’s high of 1.3005, this just adds further weight to its importance. Falling over this morning leaves the market stuck under this resistance band. However, it has also been a good response in recent sessions and yesterday’s rebound has broken a two week downtrend. It means that trend lines (both positive and negative) are being broken all over the place. The outlook for Cable is subsequently fairly uncertain. The bulls need a closing breakout above 1.3050 to regain control, whilst selling pressure needs to break back below 1.2760 to really suggest a continued correction. The hourly chart shows initial support at 1.2875 needs to hold for the near term improvement to sustain for pressure on the 1.2980/1.3050 resistance area. 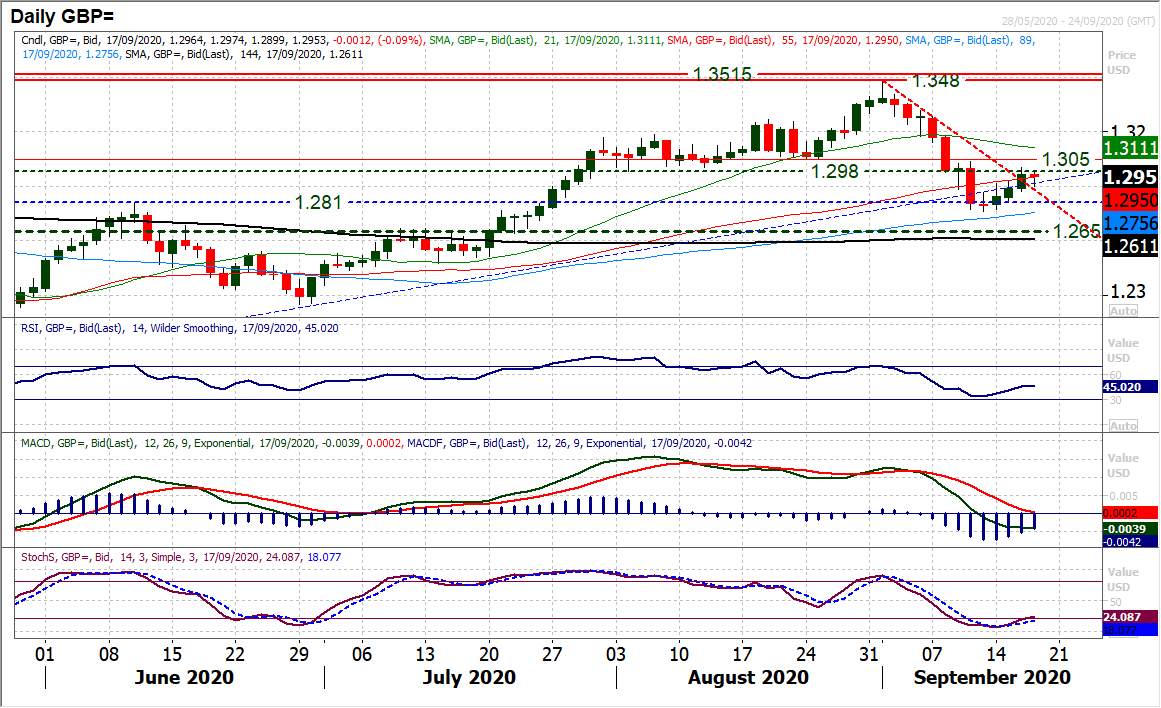 The dollar failed to get any traction out of the yen in the wake of the FOMC decision (largely due to the subdued moves on US Treasuries). Although there has been a basis of support forming overnight on USD/JPY, yesterday’s closing breach of 105.10 is an important break. It completes a range breakdown of just under 200 pips and certainly opens pressure on 104.15. The apparent lack of dollar rebound plays into this. Technical momentum indicators swinging lower with downside potential suggest that near term rallies are a struggle now. The hourly chart shows resistance mounting at 105.30/105.55 as an intraday sell-zone under the more considerable resistance 105.75/106.00. Initial support is at 104.80 but we expect 104.15 to be tested in due course. Below that there is minor support at 103.10 before the March spike low at 101.17. Key resistance remains 106/107. 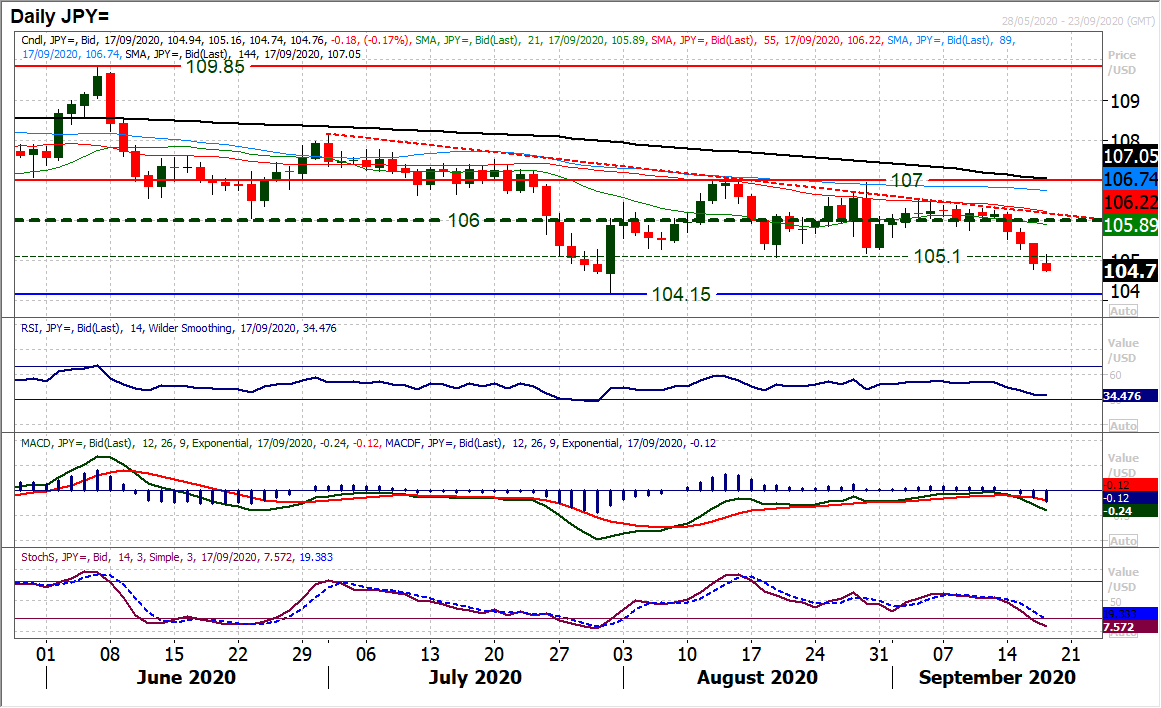 Gold has struggled for traction in a run higher over recent sessions, and now with a tick back lower this morning, it plays into the continuation of a growing medium term range between $1902/$2015. Holding the support at $1902 with consistent closes above the 23.6% Fibonacci retracement (of $1451/$2072) at $1926 is important for the bulls, but in order to sustain what has been building as a positive bias they will be looking to hold above a $1937/$1940 near term support band. So this early slip lower needs to be watched today. Daily momentum indicators reflect the ranging, with RSI and Stochastics both tailing off around neutral and MACD lines flattening also around neutral. Hourly indicators suggest pressure on $1937/$1940 today but for now, the support is broadly intact. Resistance is also mounting around $1972/$1973 from recent sessions. This leaves gold sitting at a near term crossroads. We continue to believe that gold remains a buy into weakness. 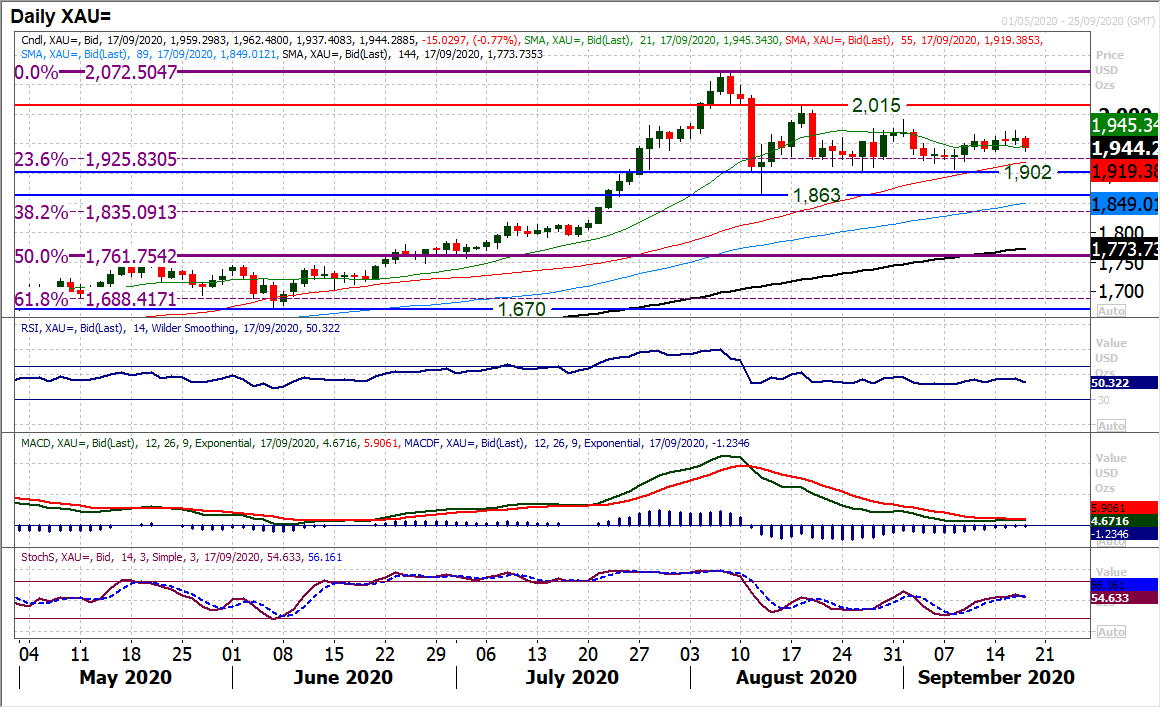 The sharp improvement in Brent Crude has come in the last couple of sessions to leave two decisively strong positive candles. Driving above $41.30 will certainly encourage the bulls and effectively opens $43.60 as the next line of resistance. However, they now need to solidify the improvement through building support at/above $41.30. The early slip back this morning immediately looks set to test this. The key importance though is that the support over the past week has developed consistently around $39.30 as a decent floor now. The OPEC+ meeting today ramps up volatility but when the dust settles from that we will know a lot more about what the bulls are made of in a potential recovery. Initial resistance $42.45. 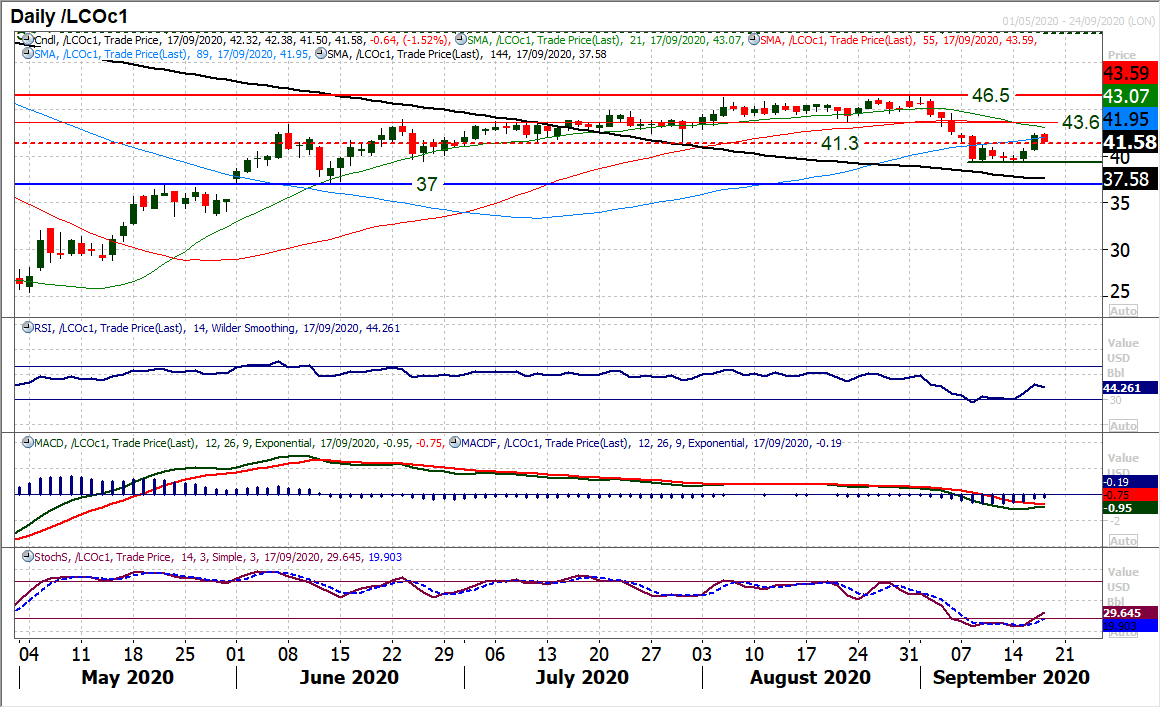 In front of the Fed, Wall Street looked to be pulling higher, but the reaction into the close last night was one of disappointment for equities. An almost “gravestone doji” candlestick reflects a bull failure and a turn back lower. Futures are suggesting this will continue today. It is also a rejection of the pivot area around 28,155 and with yesterday’s high of 28,365 means that a resistance band 28,155/28,365 is now in place near term. The swing lower also now means that the bulls will need to once more prepare for a potential test of the key support band 27,445/27,580. This near term phase of uncertainty following the breaching of the five month uptrend continues. Closing either below 27,445 or above 28,365 would now be the key directional move for the next phase. 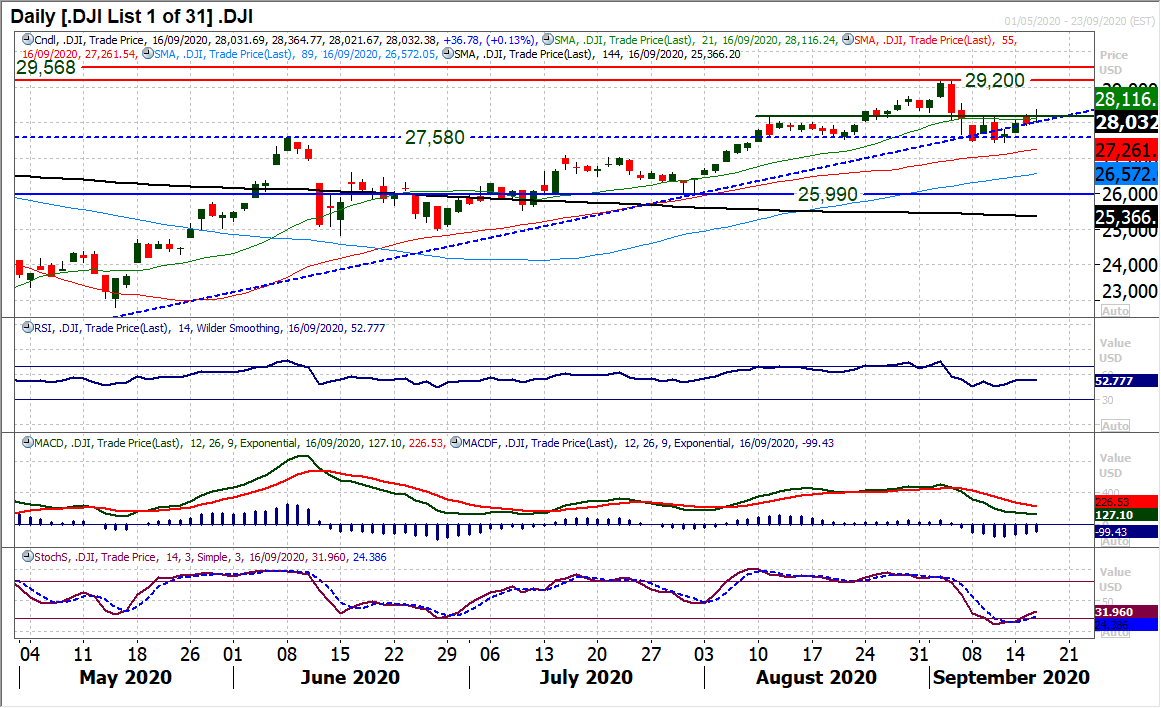