Near term dollar rebound setting in, but will it just be another chance to sell?

Longer dated Treasury yields continue to fluctuate with the comments of Fed speakers and this is generating uncertainty across dollar moves. The dovish comments from the FOMC’s Lael Brainard (that the Fed needs to roll out more stimulus to overcome the COVID crisis) should not really come as too much of a surprise given her historic dovish leanings, but they have pulled yields lower. This has helped to restrict the dollar sell-off for the time being. We still see the dollar continuing to weaken in due course, but a near term rebound is developing today, helped by better than expected ISM Manufacturing and new orders. This is weighing across major pairs, with the Aussie dollar especially in the crosshairs as Australian Q2 GDP came in far worse than expected overnight. This is also weighing on gold, which is once more very much allied to moves on the dollar through negative correlation. All the while, these currency moves are having a key impact on equities too. The dollar weakness helps to drive Wall Street ever higher, whilst European markets are performing less well due to currency strength. Add in ongoing risk for the UK economy of Brexit trade negotiations and we see a mammoth underperformance on FTSE 100. 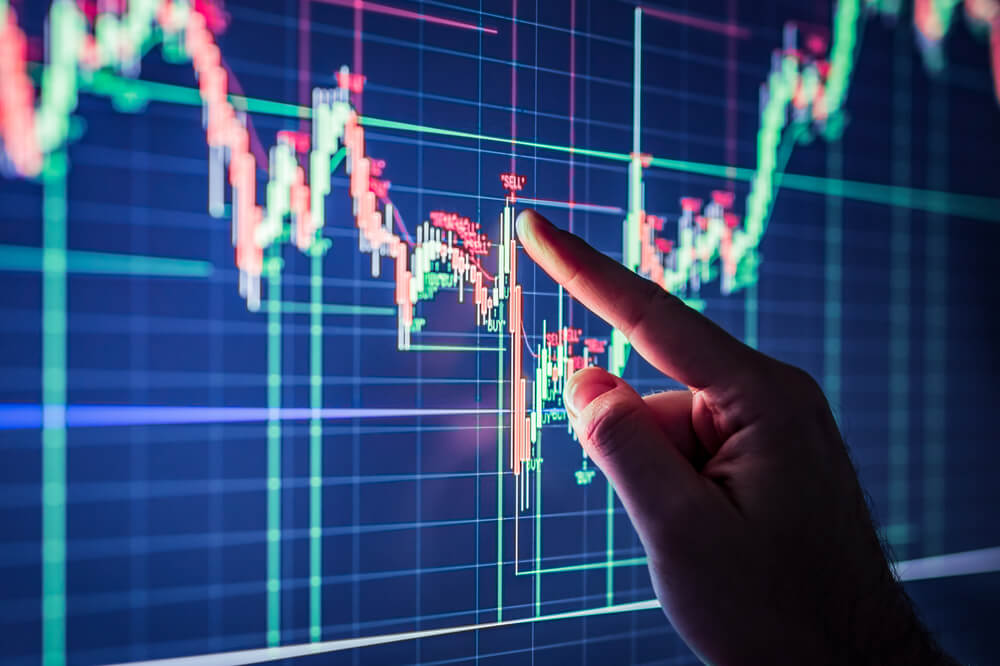 Wall Street rallied again last night, with S&P 500 +0.8% at 3526. US futures are also again higher today, with the E-mini S&Ps +0.3%. In Asia, there was a mixed to positive bias, with Nikkei +0.5% and Shanghai Composite -0.1%. In Europe, the outlook is looking decent early today, helped by weakening euro and sterling, with DAX futures +0.7% and FTSE futures 0.8%. In forex, there is a mild USD rebound setting in, with the only exception being strength through NZD. In commodities, again a dollar rebound is weighing slightly on gold and silver, whilst oil again attempts to pull higher.

It is a US centric day for the economic calendar today. The ADP Employment change is at 1315BST and is expected to show a big jump in jobs by 950,000 in August (up from 167,000 in July). After the wild under-steer that ADP gave for an eventually strong Nonfarm Payrolls last month, this number could have a reduced impact today. Traders will also be watching for the July Factory Orders at 1500BST which are expected to grow by +6.0% on the month (after growing by +6.2% in June). After Hurricane Laura hit the Gulf of Mexico last week, the EIA Crude Oil Inventories will make interesting reading, with a drawdown of -2.0m barrels expected (-4.7m barrels previous week). There will also be an eye out for the Fed’s Beige Book of economic outlook at 1900BST.

There are a couple of central banker speakers to watch for today, with the FOMC’s John Williams (centrist, voter) at 1500BST. There is also the Bank of England’s Ben Broadbent at 1530BST.

Equities in major markets have been extremely strong in recent months of the recovery. Not so, if you are an investor in FTSE 100. A simply enormous underperformance continues to play out. Since the March low of 4899 FTSE 100 has rallied just under 20%. In that time, the DAX has rallied around +57% and S&P 500 +60%. This was made worse yesterday when the FTSE 100 broke to multi-month lows on an intraday move below 5857. Technically, although the market did not close below the 5857 August low, the deterioration is stark on a momentum basis. Daily RSI is below 40 with downside potential, whilst Stochastics have dropped to their lowest since March and MACD lines are accelerating lower. An early rebound has set in this morning, but within a mini downtrend channel this is likely to be the source of the next chance to sell. At the very least, we expect continued underperformance (possible pairs trades with other indices are still viable), but even on a standalone basis, FTSE 100 is a sell into strength. Near term resistance is at the 38.2% Fibonacci retracement (of 7687/4899) at 5964 as an initial barrier, with a sell zone 5950/6052. The way is now open for downside towards the 23.6% Fib level at 5557. The bulls will be hoping that this is just another selling phase of a bear drift, but it would need a rally above last week’s lower high of 6173 to change the outlook now. 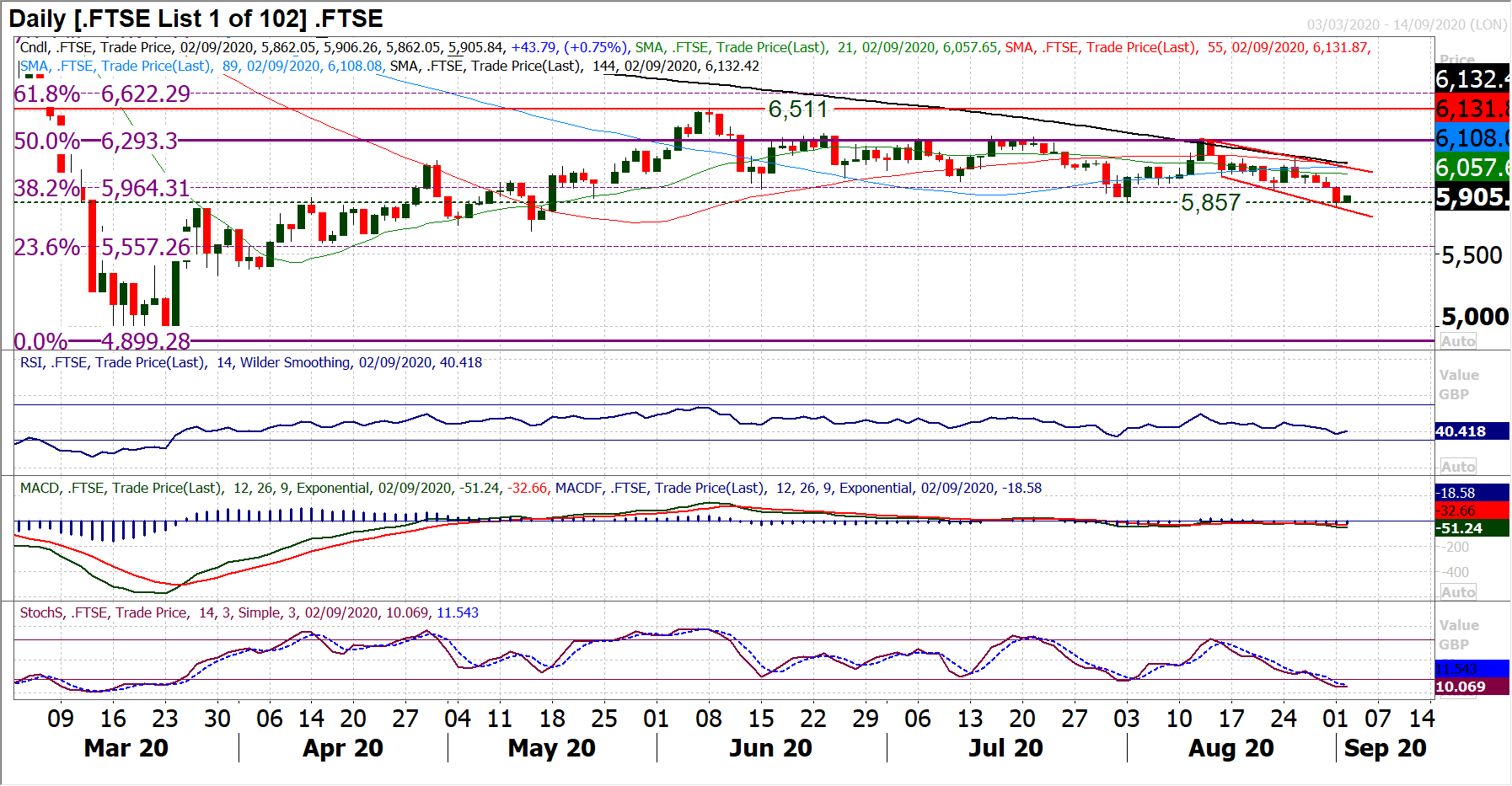 Another breakout to multi-year highs on EUR/USD, but another bull failure. This time we see that a “shooting star” one day candlestick pattern has formed as the market has pulled back from a high of 1.2010. This failure is fairly similar to the mid-August move which pulled back then over the course of the next week. It suggests that buying EUR/USD into supported weakness is better than chasing the breakouts. We also have to just keep an eye on the how the momentum indicators develop now as there are hints of negative divergences forming. The market is ticking slightly lower again today, so there is a near term corrective drift threatening now. The hourly chart shows 1.1880 is an initial pivot support and 1.1850/1.1880 ideally would be holding for the bulls. There is room for an unwind to still be seen as a healthy move still. The 15 week uptrend comes in at 1.1710 today but anything holding above 1.1750 would still be positive on an ongoing medium term basis. 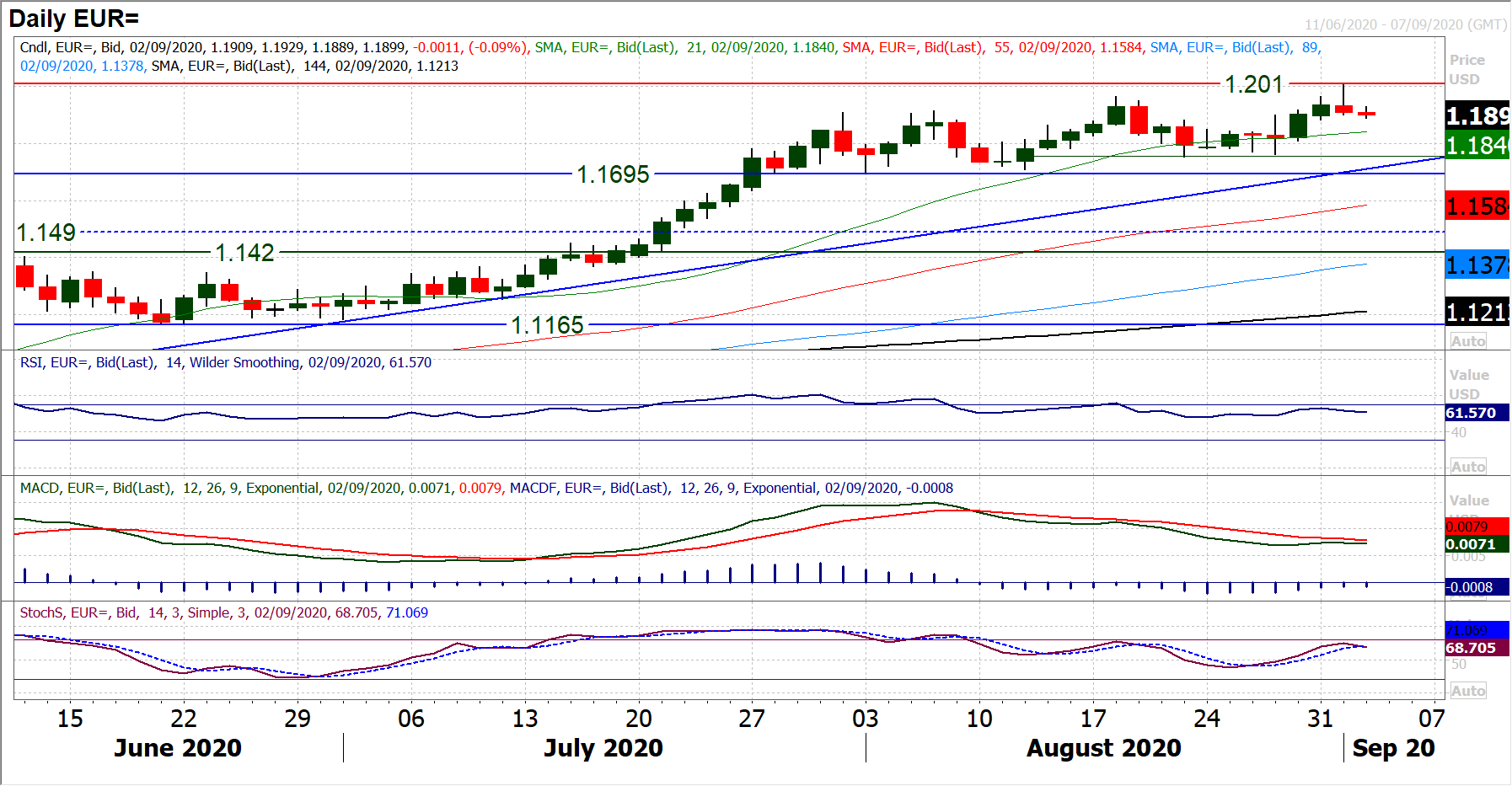 The threat of a near term USD bounce back is growing, even if it is small right now. The “shooting star” present on EUR/USD is far less prominent on Cable, but the bull failure of pulling back -100 pips of session highs yesterday is something to take note of. Coming with a cross lower on Stochastics and RSI bumping up against 70 (arguably extended) means that a near term pullback is threatening now. The clear area of initial support is the previous breakout at 1.3265, whilst the two month uptrend is supportive at 1.3175 today and the rising 21 day moving average (which has been a basis of support for near term corrections and is currently at 1.3165) are also a little way back. We are a little cautious now chasing Cable higher at these levels and see better opportunities for long positions on a near term slip lower into the band of support 1.2185/1.3265. Yesterday’s high of 1.3480 came just shy of the December spike high resistance at 1.3515. 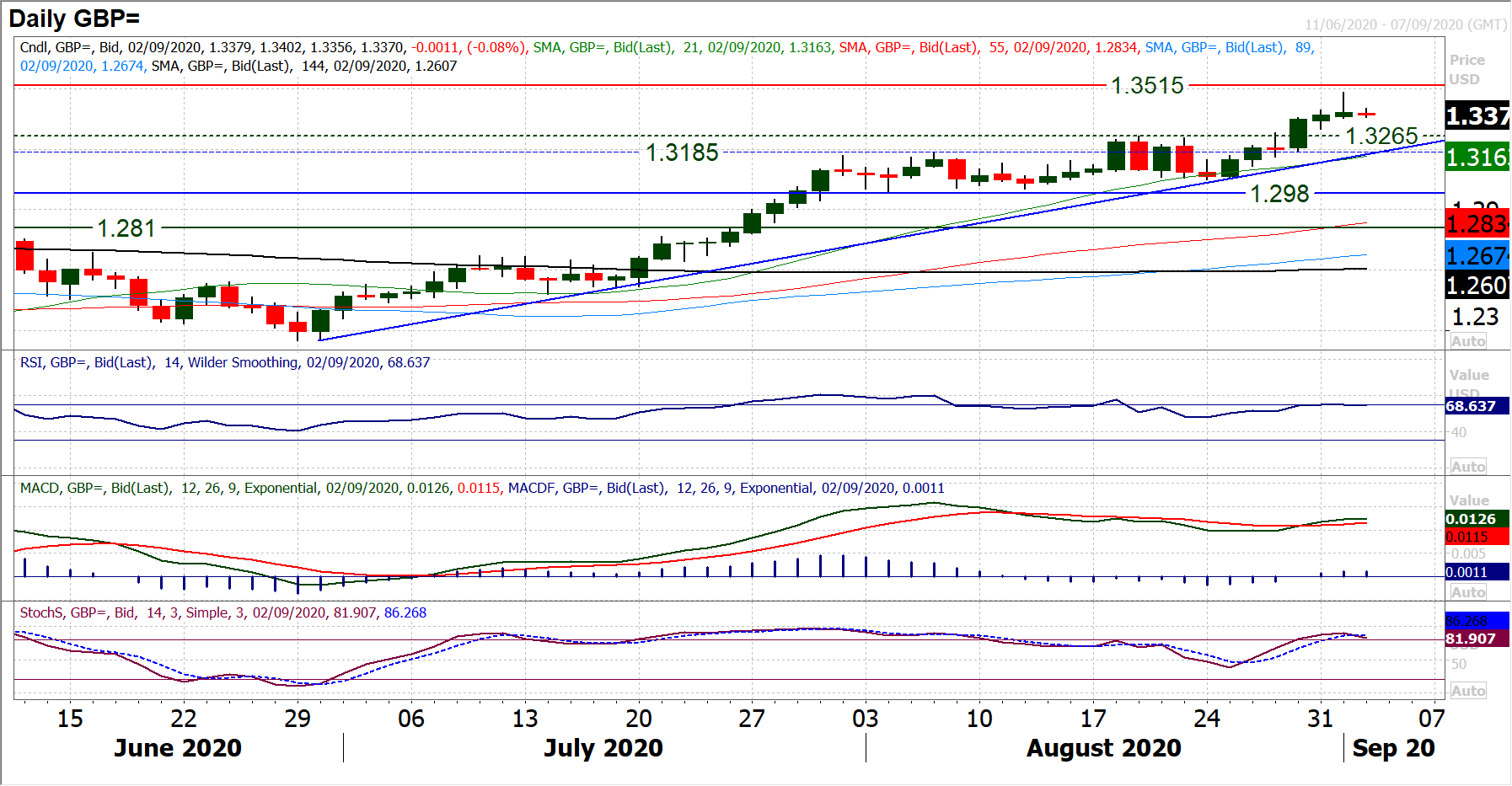 We discussed recently the ranging outlook that has formed in the past month on Dollar/Yen, as the market has traded between 105.10/107.00. Allied to that is the consistent attraction the market has to the 106.00 old pivot level which has formed as a mid-point of this range. Although not to the pip, the attraction that 106.00 has on the price right now is strong. This once more played out yesterday as the market again gravitating around this level. We continue to see a slight negative bias in the outlook on daily momentum indicators, as they all struggle around (RSI) or under (MACD and Stochastics) their neutral points. Subsequently we expect rallies into 106/107 to continue to fade and prefer to position for pressure towards 105.10 in due course. A gauge of a two month downtrend comes in at 106.60 today, whilst it would need a decisive close above 107.00 to suggest a bullish break-though. The hourly chart shows initial support at 105.60. 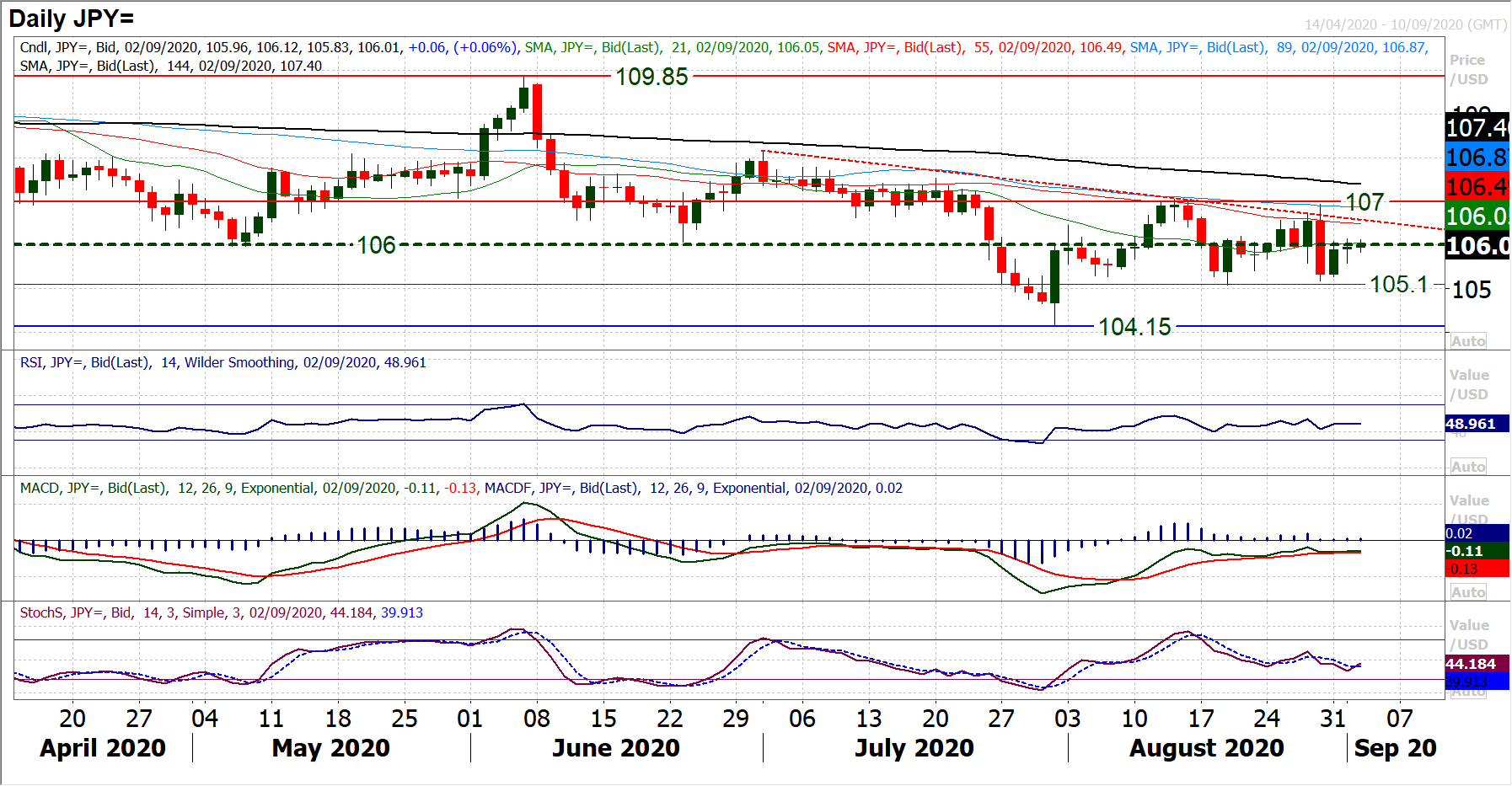 The bull move has stuttered in the early part of this week. Just when it looked as though there was upside traction forming, a slight mis-fire of the engine has seen the move stall. Two small bodied but slightly positive candles have formed, but the early slip back this morning is just dragging slightly now. For now, this looks to just be part of the bull breakout and the market is building the next higher low within the three month uptrend (that comes in at $1924 today). Daily momentum indicators remain bullishly configured on a medium term basis and suggest that supported weakness remains a chance to buy. The hourly chart shows good support around the $1955 near term neckline, whilst hourly indicators have unwound to levels where the buying pressure has tended to return in recent weeks. It was interesting to see $1976 coming back in as a basis of resistance in the past 12 hours, and a move back above here would suggest the bulls beginning to find some traction again. Resistance is yesterday’s high of $1991 whilst $2000 is psychological and $2015 is key. Even if $1955 is breached as support, any basis of support above the 23.6% Fibonacci retracement (of $1451/$2072) at $1926 is a chance to buy. 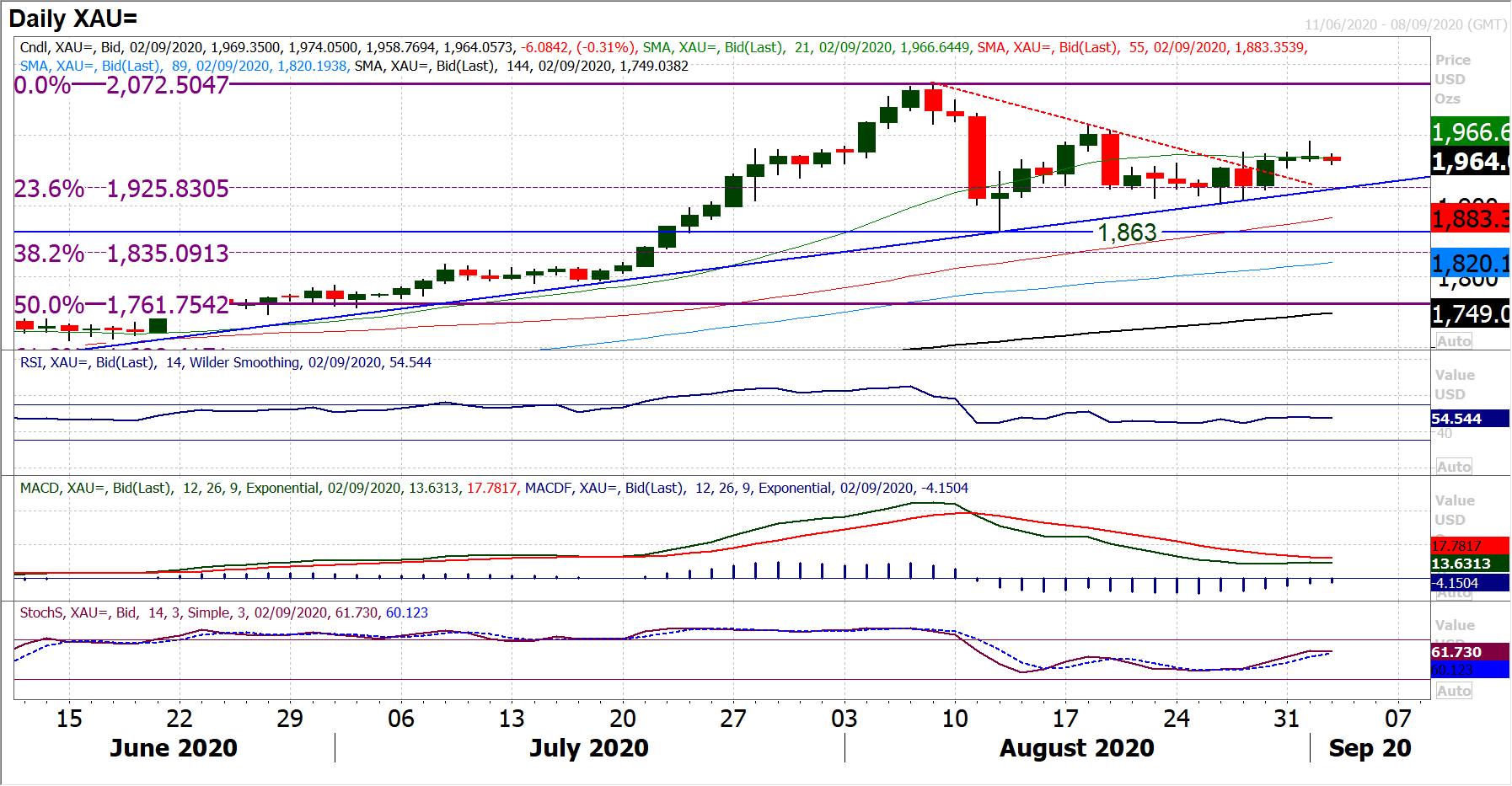 With support again forming recently around the rising 21 day moving average on Brent Crude (today around $45.15) we continue to see near term weakness as being a chance to buy. The pressure has again been on the resistance at $46.25, but once more the resistance has held firm. We do expect that this will ultimately be breached though and for the market to move into the high $40s in due course. Beyond $48.40 there is little real resistance until $53.10/$53.90. We remain cautious on chasing breakouts though, as these have repeatedly been followed by consolidation and corrective drift before re-engaging higher. The mildly negative configuration of the last two daily candlesticks (both closing around session lows) adds to our caution. The market is again ticking higher this morning though, and it looks as though the bulls continue to drive the outlook. Support at $44.55 coincides with the 11 week uptrend today, with $43.60/$43.90 being key support now. 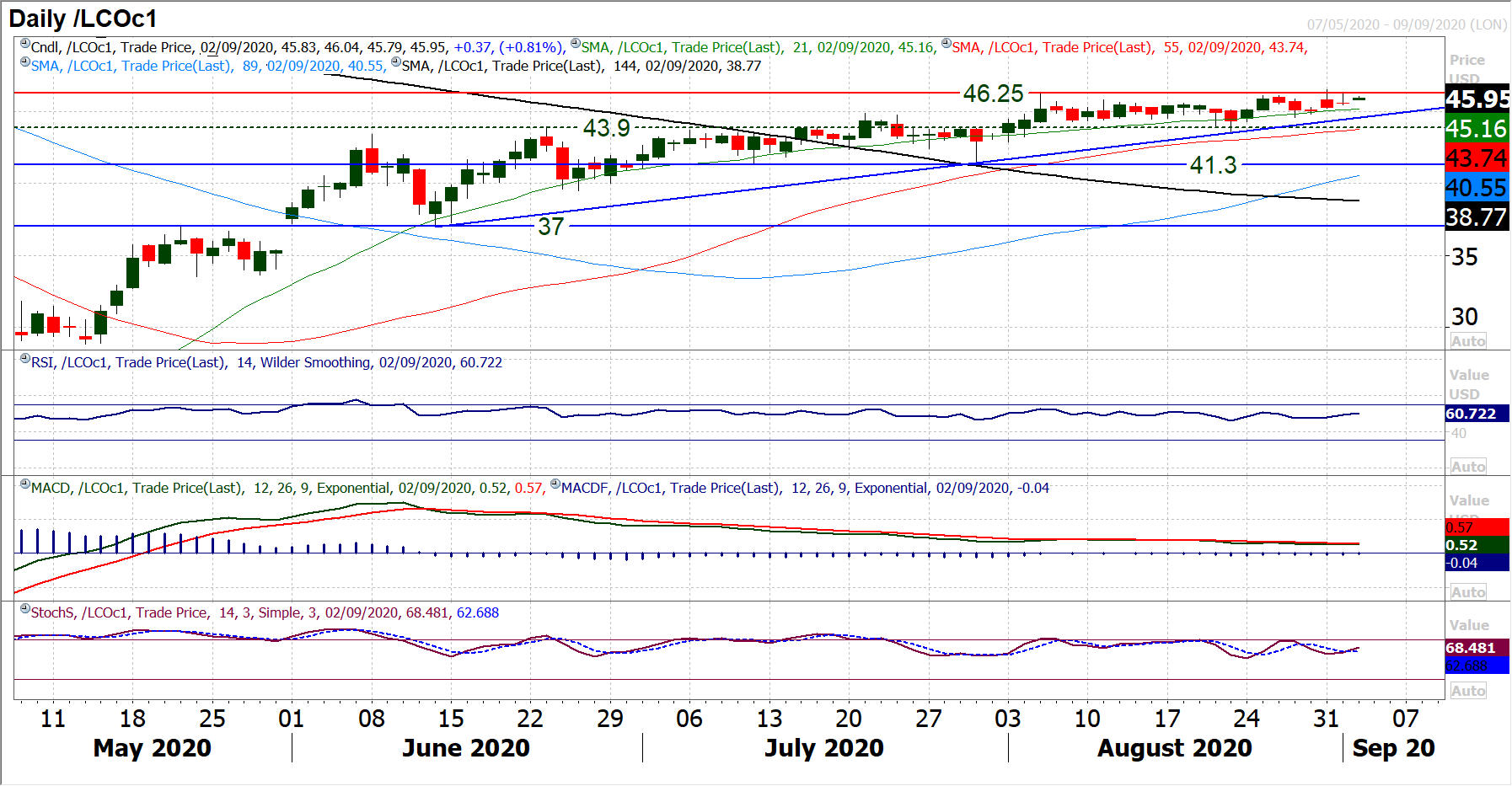 The Dow remains on track as the bulls have responded quickly to again nullify a threatening corrective move. Momentum indicators remain strongly configured and weakness is a chance to buy. Holding above the initial breakout support at 28,000/28,155 the bulls have left 28,290 as the basis for another near term higher low. There is still the matter of “closing” the old bear gap from February between 28,400/28,890, but given the positive outlook across technical indicators, this should only be a matter of time. The all-time high of 29,568 will then come into sight. Key support remains 27,525/27,580. 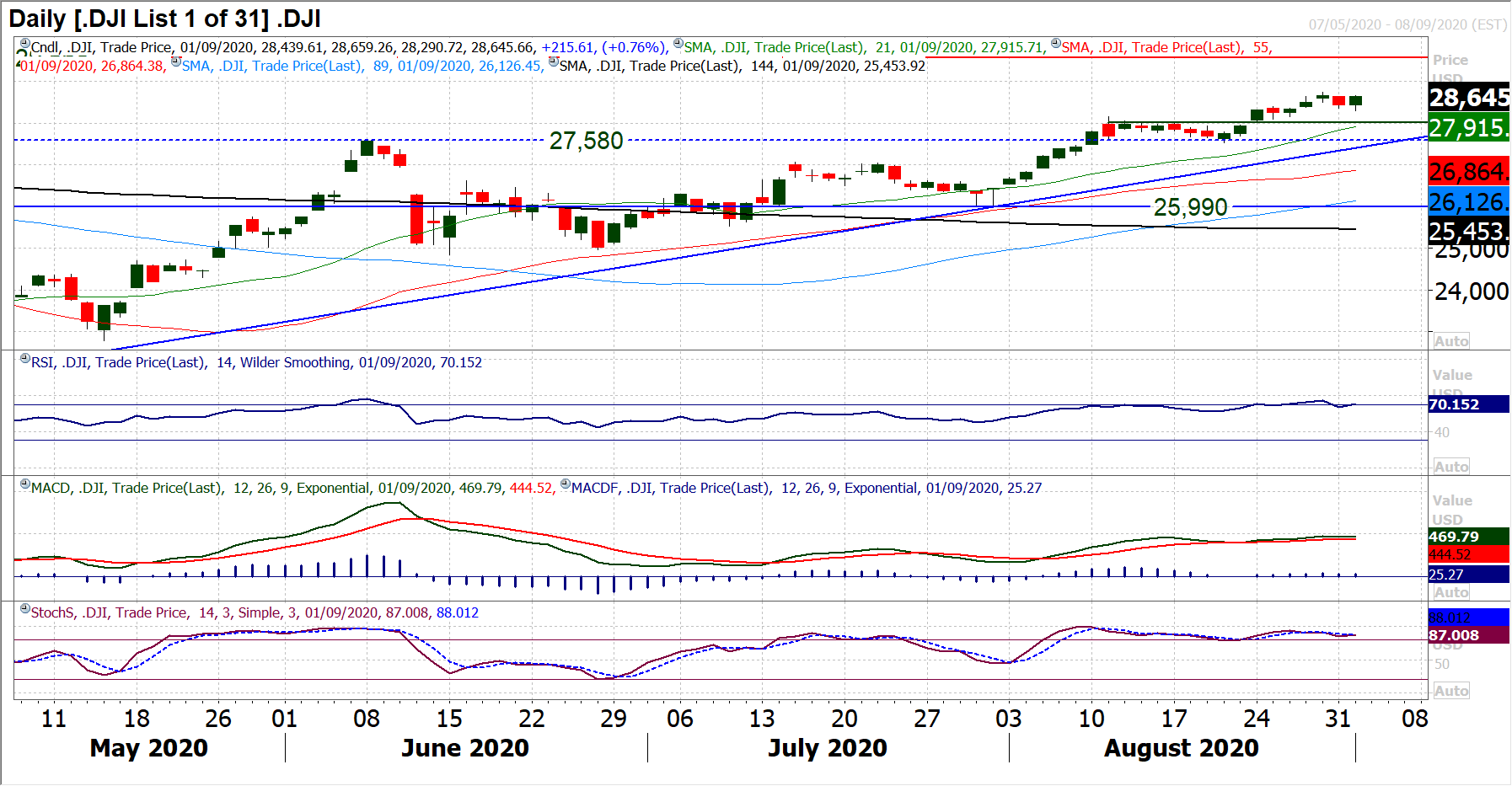