Although there is a very mild positive bias this morning as the European trading session takes hold, major markets are searching for conviction as we approach the end of the week. A mild risk negative bias from yesterday is being countered today but these are all still very minor moves compared to what traders have been used to in recent weeks. Add in the fact that it is also “quadruple witching” today (where futures and options for index and individual stocks all expire on the same day) which could add some volatility later today, so there is a degree of caution in front of this event too. Essentially though, the caution comes from markets having become far less certain of the continuation of risk rally in recent sessions. US weekly jobless claims continue to rack up and are worryingly higher than expected. There seems to be a confliction between the risk positive fiscal and monetary support, versus the fears over economies re-opening and second wave infections dragging on expectations of economic recovery. Subsequently the dollar weakness is being gradually unwound in the past week, and a less positive sentiment develop through markets. Equity markets are less bullish now and retracements in the risk recovery are threatening. The announcement early this morning of UK Retail Sales for May bouncing back and being much stronger than expected may add some support for sterling today. After yesterday’s sell-off came through scepticism of the Bank of England’s relatively upbeat take on the UK economy. This could be something that tempers the immediate selling pressure on sterling. It is helping to pull some mild outperformance versus major forex today. 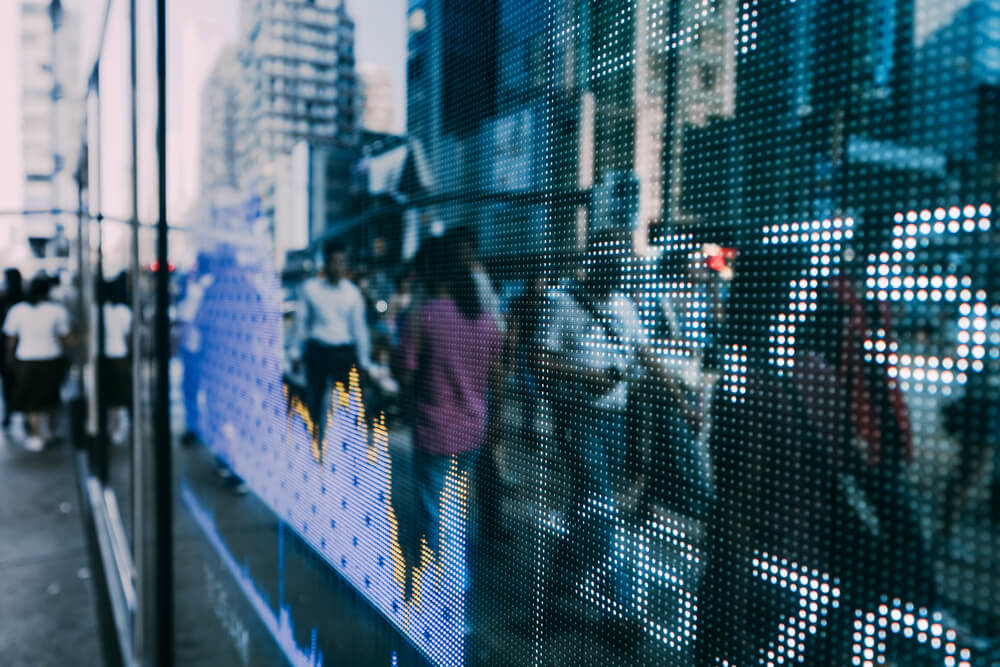 Wall Street closed mixed last night, but the S&P 500 managed to eek out some gains by +0.1% at 3115. US futures are though starting on a positive note today with the E-mini S&Ps +0.7%. This has helped to usher a mild positive close on Asian markets (Nikkei +0.5% and Shanghai Composite +1.0%). In forex, this mild positive risk move is seeing a USD underperformance, whilst EUR, AUD and GBP are performing well initially. In commodities, the dollar weakness is allowing gold to tick +$8 higher, whilst silver is around the flat line. Oil continues on its re-engaged path higher with another early gain of +1.5%.

There is another Fed speaker to watch for today, with Randall Quarles (centrist voter) speaking at 1700BST.

There is an intriguing battle of the gaps on the DAX now. There is a bearish gap lower from 12,470 and a bullish gap higher at 11,968. This comes as the market has shown signs of uncertainty in the past couple of days. The bulls may not be as strong as they would like to be now, with the bear gap from 12,470 having now been “filled” by yesterday’s bull failure. The move also completed a bearish key one day reversal which now increases the potential for this to be a key lower high too. How the market reacts in today’s session will be very important now. Not only does the gap at 2,470 need to be “closed” for the bulls to be assured, there is added resistance of the key reversal too. The hourly chart shows that if support at 12,152 is breached today then the corrective momentum will begin to build. The prospect then would become one of moving back towards the bull gap support at 11,968. Momentum indicators have developed less conviction with the medium term recovery recently, with the declining MACD lines reflecting this. However, it will be how the market deals with either (or both) of these gaps which will be a key determinant over the development of the next phase for the outlook. 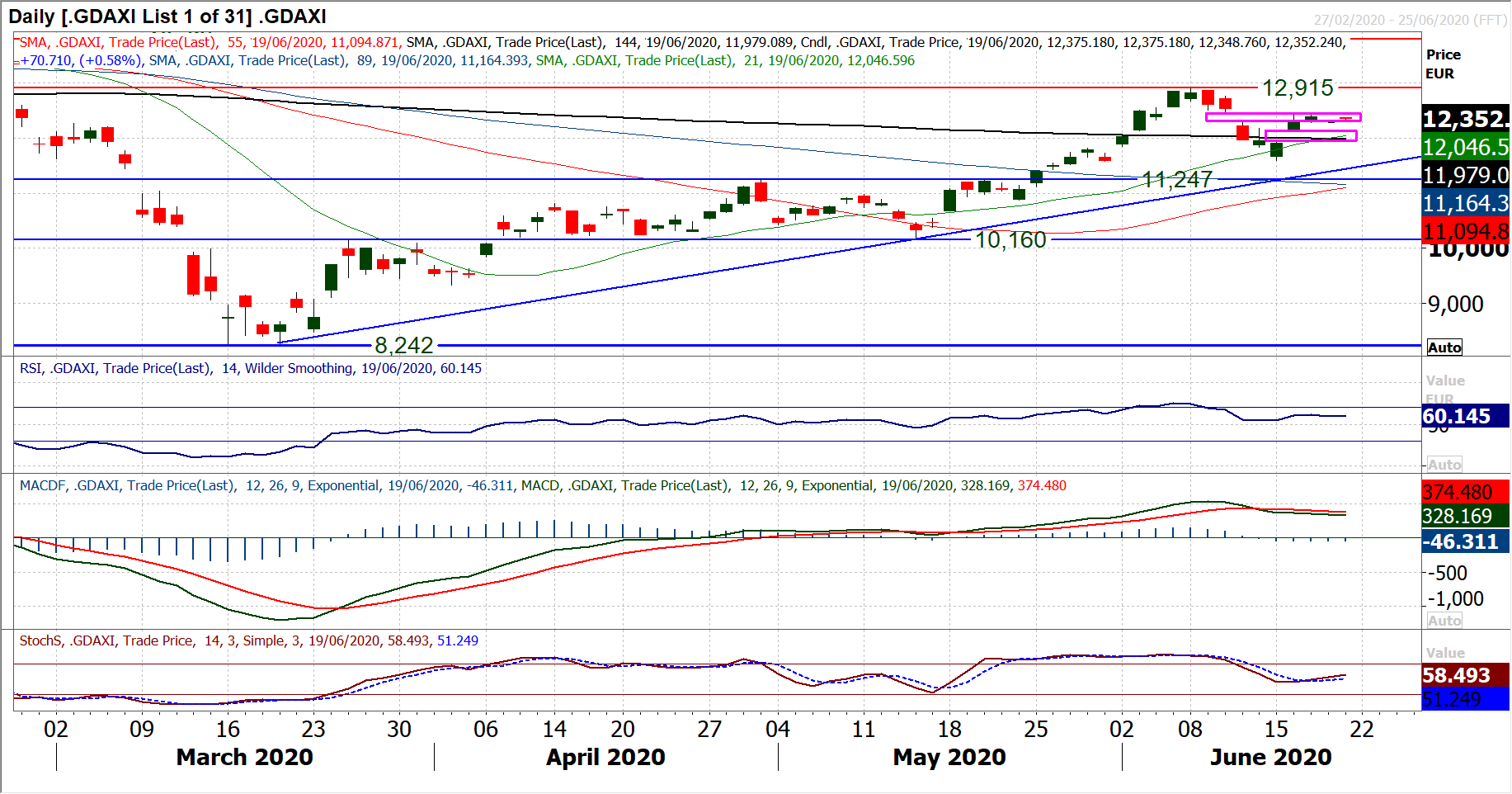 A continuation of a run of negative candles on EUR/USD is weighing on the near term outlook. A third negative session in a row and the market is edging towards a corrective move. This comes with momentum indicators turning lower, as MACD fall off a bear cross and Stochastics begin to accelerate lower. However, the nature of this move is still fairly orderly and seems to merely be countertrend to the recovery. Given how overstretched momentum had become, this move is still considered healthy within the medium term positive outlook. The move looks to be an unwinding retracement which is pulling the market back towards breakout support. The old key March high of $1.1145 is prime area for this move, whilst there is also an uptrend of the past five weeks which sits around $1.1150 today. There is an argument for a deeper correction, with a near term topping pattern completed below $1.1210 (which implies around $1.1000), however, given our reading of this being a bull market pullback, we expect the buying pressure would resume earlier and undershoot the downside target. Resistance at $1.1350 is increasingly important now, with lower highs also forming to leave the initial $1.1260 resistance today. We believe there is more in this near term correction but are on alert for the emergence of renewed buying too. 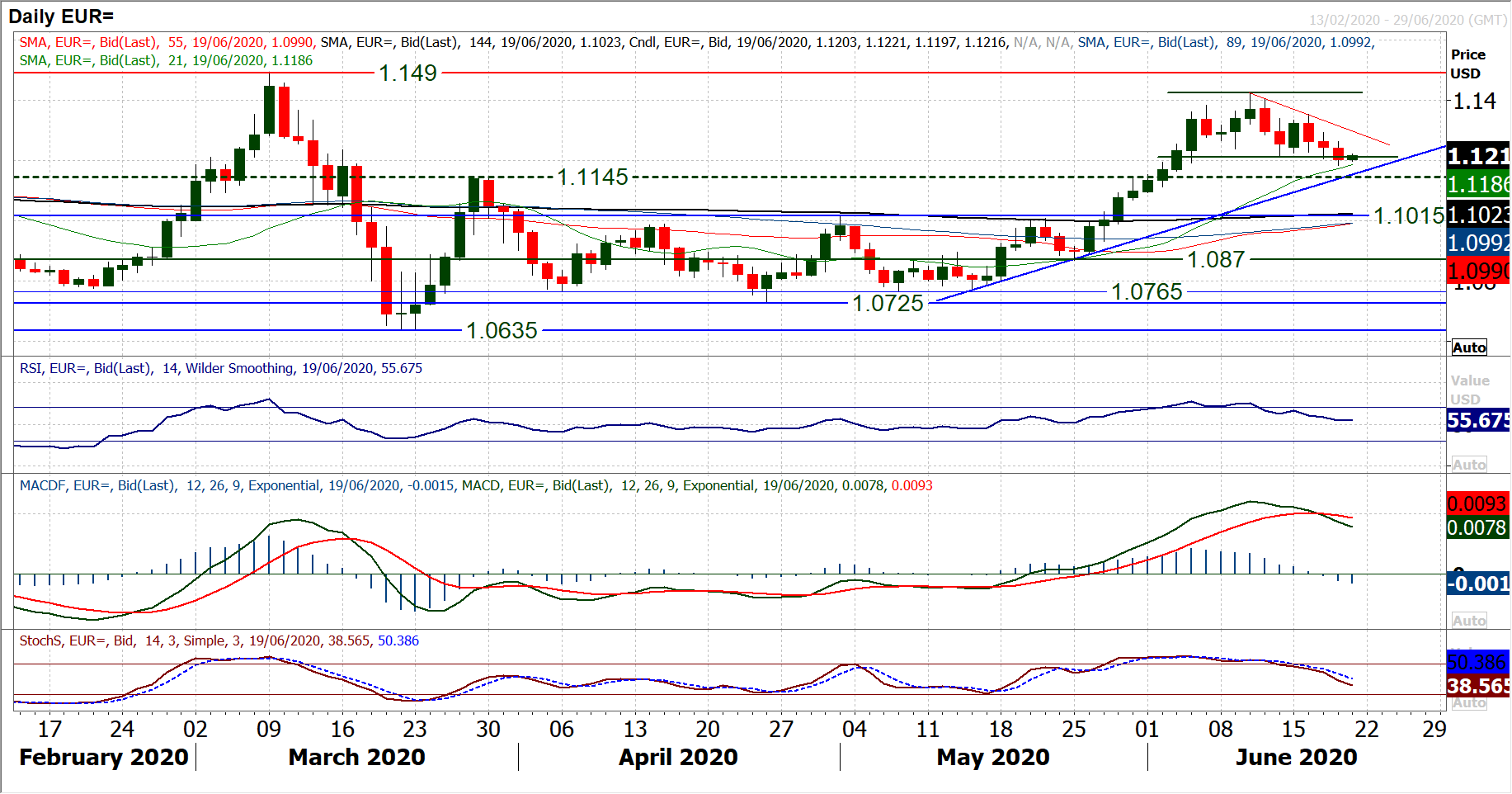 The Bank of England was optimistic yesterday, but perhaps too much so. The market has taken a different view of sterling. After an initial pop to the upside, a decisive move lower for sterling yesterday completed another bearish candle on Cable and a two week low. Breaching the $1.2450/$1.2500 support band now leaves this as an area of overhead supply for a near term rebound which we are seeing today. The daily momentum indicators are tracking decisively lower now and having also broken the support of a near five week uptrend, Cable is building a corrective move. Lower highs (the latest at $1.2685) and lower lows are the building blocks of a new trend (although this would admittedly be within the re-affirmed range of $1.2075/$1.2810). A bull failure in the band $1.2450/$1.2500 would continue this move lower and a move below yesterday’s low of $1.2400 opens initial support at $2.2360 but also deeper within the medium term trading range. The hourly chart shows hourly RSI failing consistently around 50 now and MACD lines under neutral. Intraday rallies will be seen as a near term chance to sell for positions towards the medium term range lows. Above $1.2585 improves and neutralises the bear move, but the bulls need a move above $1.2685 to really re-establish themselves. 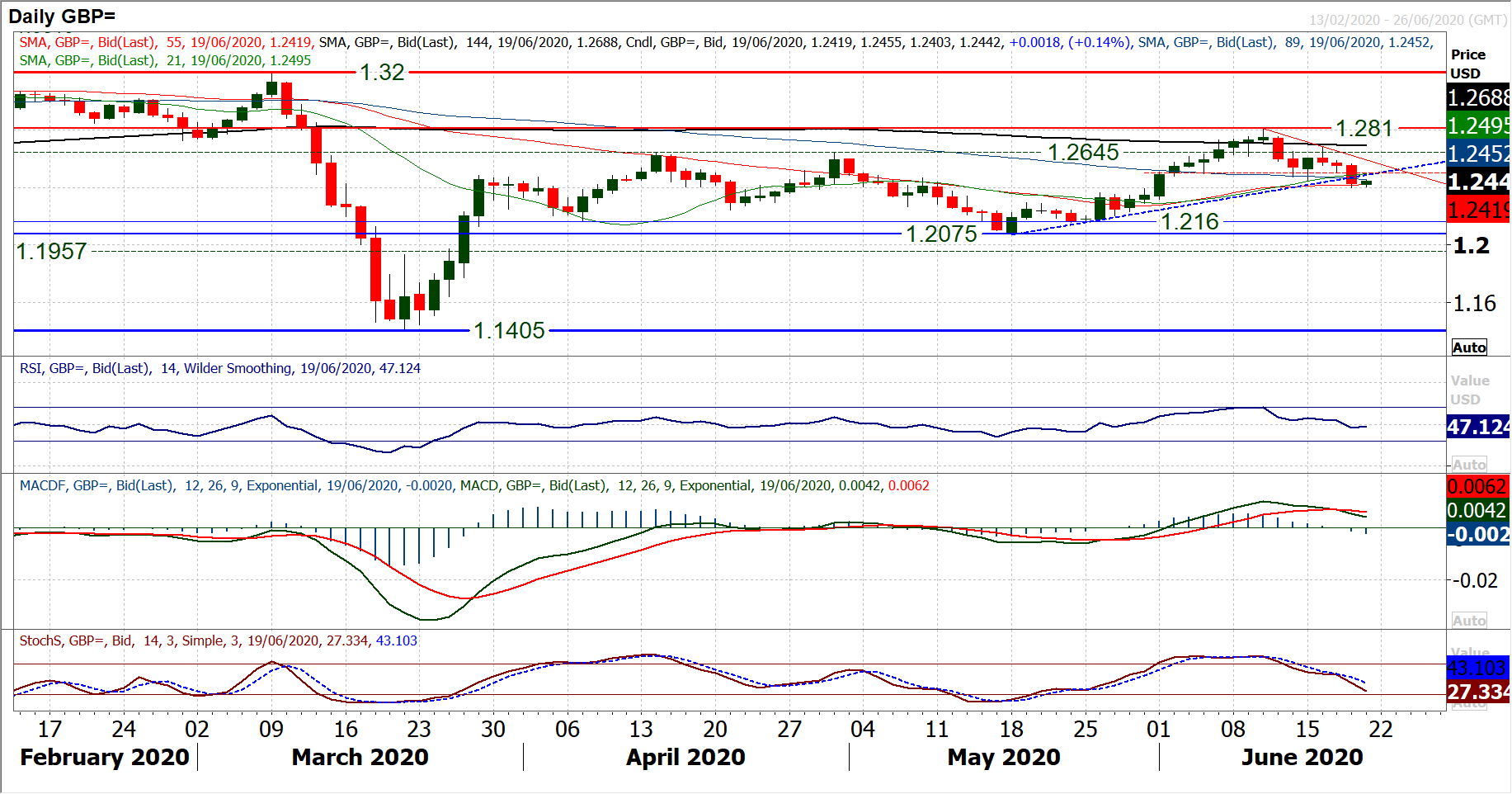 With the market rolling over at 107.60 there has been a negative bias that has taken hold within the outlook on Dollar/Yen once more. At this stage it is only a marginal bias for pressure towards the recent low at 106.55, but if this is breached then the key support at 106.00 is open once more. However, given the still very muted negative look to moving averages (they are all only slightly drifting lower) and rather subdued drift of momentum, we still do not see there being a huge build-up of selling pressure on the pair. Initial intraday downside was quelled yesterday to leave another small bodied candlestick. We certainly favour selling intraday strength but this is still a very benign negative outlook overall and we see little appetite for driving downside moves. There is near term resistance at 107.00/107.15 for pressure on 106.55. Much beyond that, we have little conviction. Above 107.60 would change the outlook to more positive again. 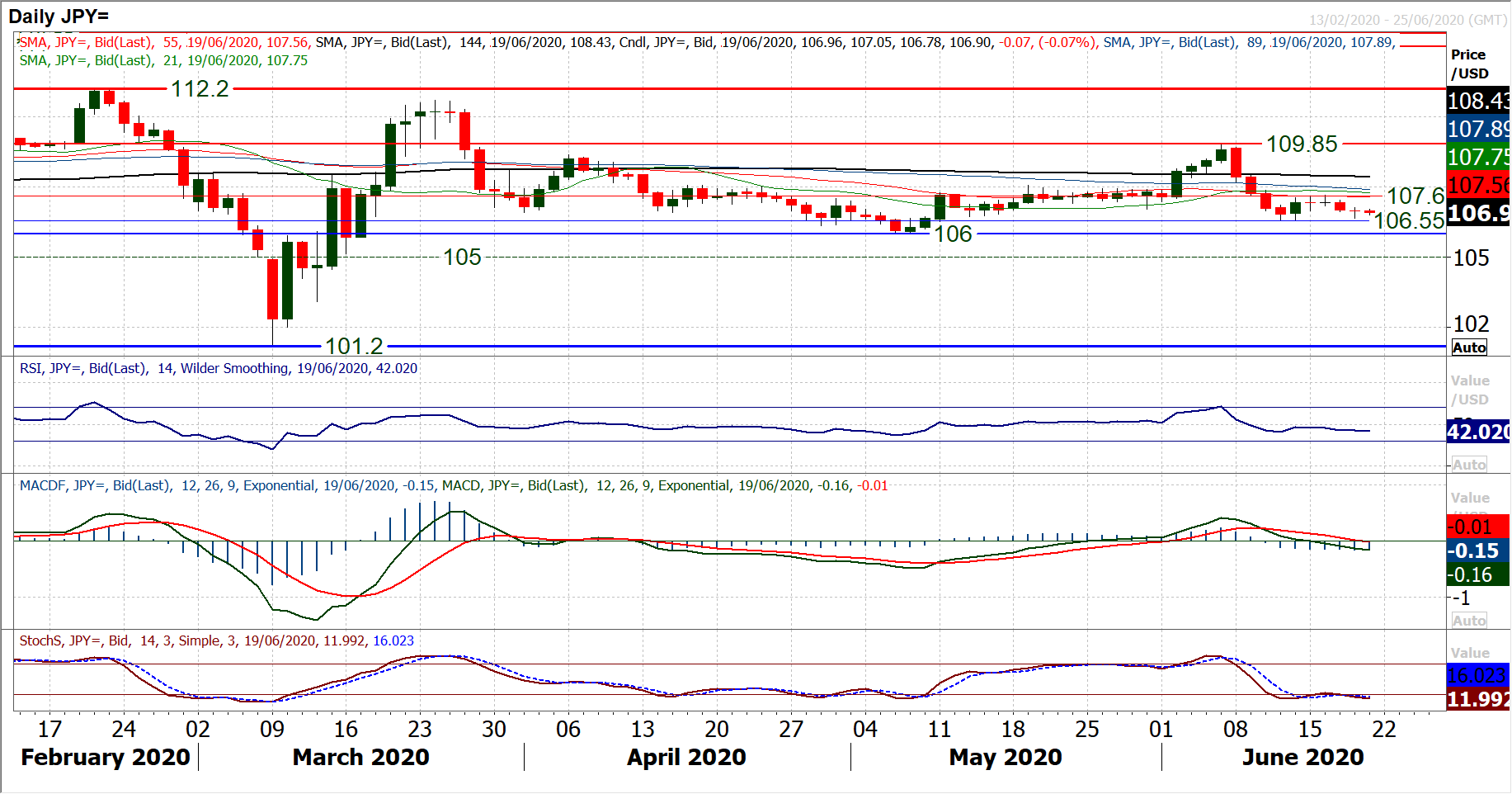 The consolidation on gold continues. The early part of this week had started to see a shade of downside bias, however, the bulls were consistently happy to support breaches of $1720 and close the market back above again. However, when this turned into a move to the upside yesterday, there was a bull failure at $1736 and another very small bodied candlestick reflecting the lack of conviction in the market right now. The conclusion to be taken is that there is uncertainty surrounding the outlook for gold right now. Daily momentum indicators have very much flattened off over the past week and this is a market looking for a catalyst now. The market is beginning to tick higher again early this morning, but we do not see reason to trust this move at this stage. Intraday rallies have faded between $1730/$1736 throughout the past week. We still hold the view that gold is trading within a medium term range between $1660/$1764 and that there will be an upside break in due course. However, unless there is a game changing fundamental event as a catalyst, we see an upside would be sticky and difficult to navigate. Initial support at $1712 and $1704. 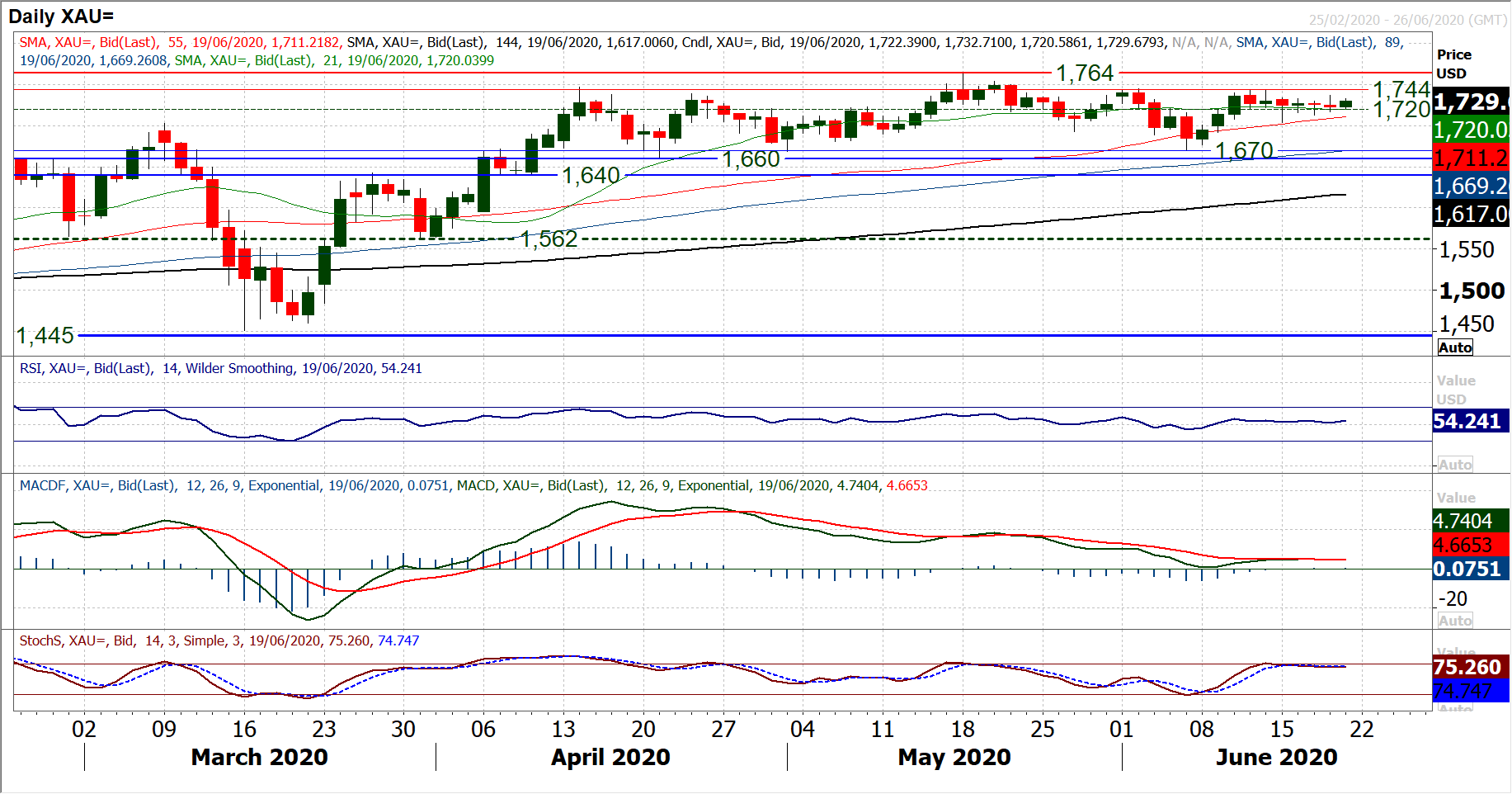 Despite a growing risk negative tone to markets beginning to take hold in recent sessions, the oil bulls are pushing on through and look to be gaining control once more. There were question marks in the wake of Wednesday’s (all but) doji candlestick, but the bulls have responded well. A solidly positive candlestick yesterday and a decent open today leaves the market testing initial resistance around $42.00. With the pick up from last week’s low at $37.00 we draw in a tentative uptrend (tentative as it only has two points of contact) which is a gauge for support and interestingly is also runs along the 21 day moving average (currently $38.95). Momentum is still looking tentative slightly, but retains a positive bias which suggests pressure on $43.40 in due course. The hourly chart shows that holding on to the psychological $40 level in recent days (which is also a near term pivot) has been important for maintaining the positive configuration on hourly momentum too. We look to use intraday weakness as a chance to buy for tests of $43.40. We still see further medium term recovery driving oil higher in due course. 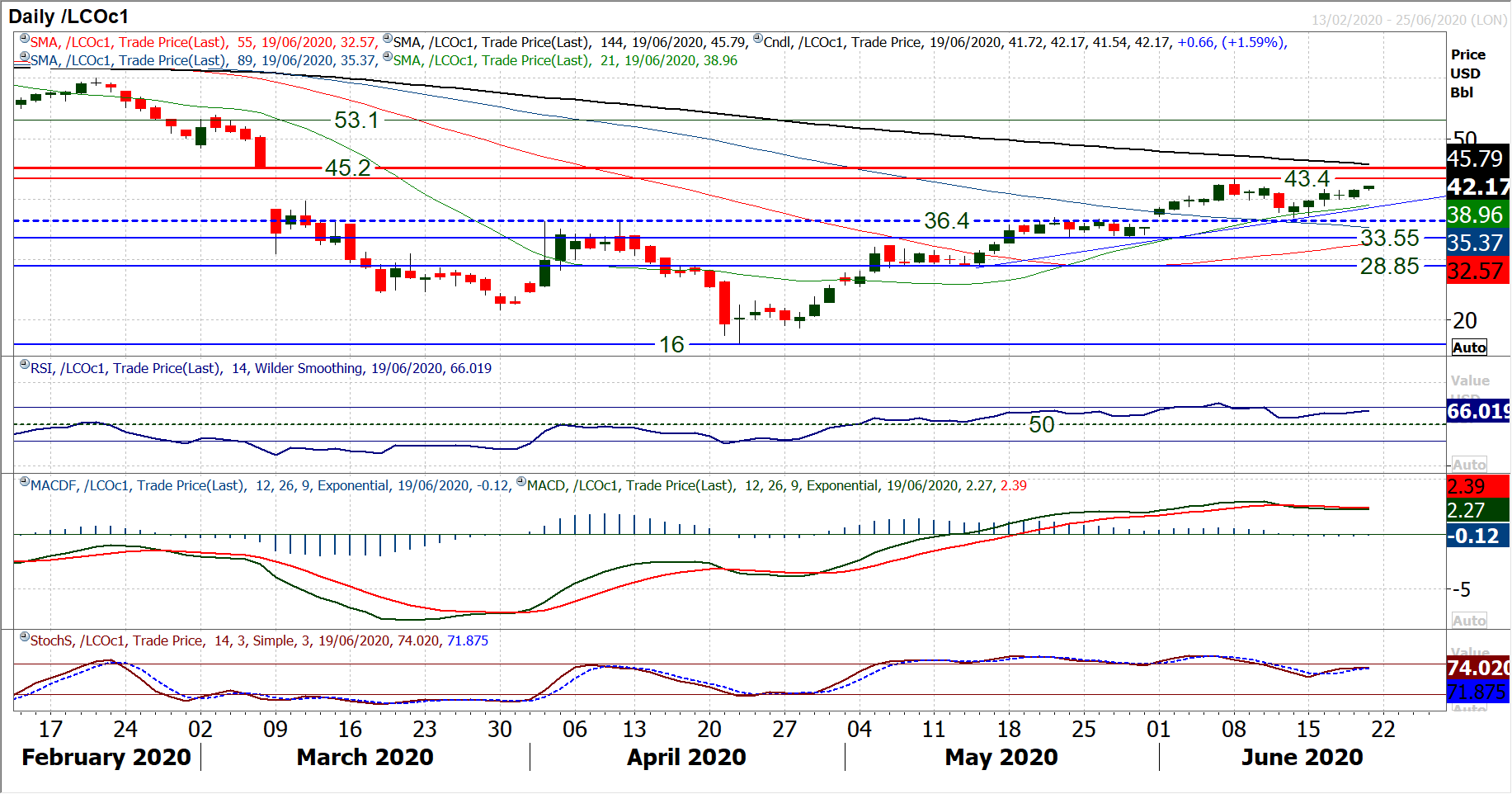 A second consecutive negative close has had the Dow backing away once more from the key gap resistance of the island reversal. Given the presence of this huge gap and the configuration of the past eight candlesticks, there is actually only really one positive candle (arguably two if you include Tuesday’s gain). Aside from Monday’s strong rebound into the close, in those eight sessions, intraday moves have all been disappointing where the bulls are continually knocked back and never able to grasp control again. Daily momentum indicators reflect this, with a drab and damp attempt at recovery. The concern would grow if there were to be a move to “close” Tuesday’s gap higher at 25,890 rather than the current “fill”. For now, the futures are pointing higher this morning and this will then put the prospect of challenging higher once more on the agenda. Resistance kicks in at 26,295 up to Tuesday’s high of 26,610. The bulls will struggle for conviction whilst the 26,980 big bear gap remains open. Initial support at yesterday’s low around 25,850. 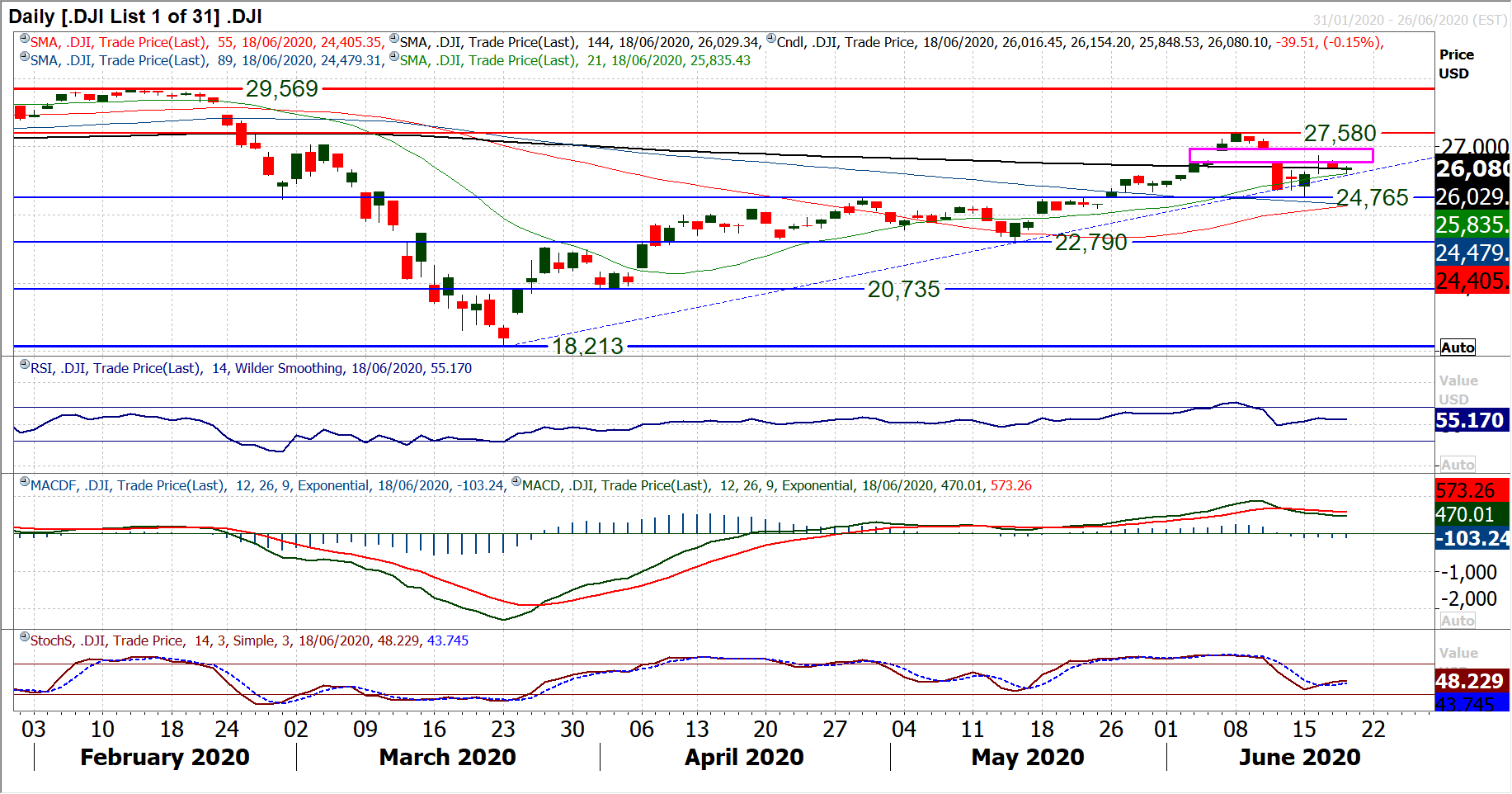