Traders are still trying to make sense of what Donald Trump’s COVID-19 infection means to risk appetite. There are some suggestions that he is stable yet also that he is on a steroid treatment only used for the more severe of cases. The broad assessment is that Trump will really struggle over the final month of the Presidential election campaign. Quite how the voters of the US make of this may be reflected in the opinion polls, but if voters do not know what a Trump presidency brings now, they must have been living in a hole for the past four years. Markets are a little more settled today, with risk appetite recovery after taking a hit on Friday. There may well be further room for elevated volatility on updates to Trump’s health, but for now, the start of this week looks to be fairly positive for risk. With ever rising COVID second wave fears though, it will be interesting to see if this improvement in risk can last. A weaker yen is a standard response, whilst it is interesting to see the dollar not suffering too much. Gold unwinding some of its recent gains (even as the dollar is slipping slightly today) is a little surprising and is worth keeping an eye on. An equities rebound is the main risk positive response, along with oil bouncing too. There is still a sense that markets are sitting at a crossroads though, albeit with elevated volatility. The next trend that begins to form could therefore be crucial to the medium term outlook. 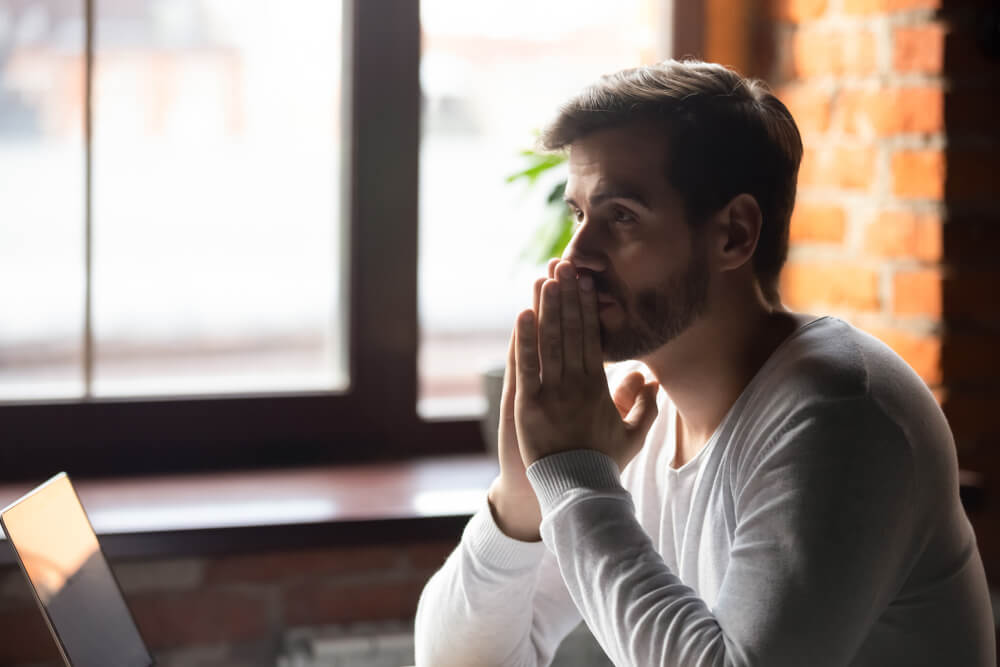 Wall Street closed lower on Friday with the S&P 500 -1.0%, however, much of this seems set to be recovered today, with the E-mini S&P futures +0.6% early today. In Asia, a decent session has seen the Nikkei +1.2% whilst the Shanghai Composite was -0.2%. European indices also look set for decent early gains, with FTSE futures +1.0% and DAX futures +0.7%. In forex, there is a mild risk positive view taken, with JPY being the main underperformer, whilst USD is also slightly weaker. In commodities, gold has slipped back by -$5 (c. -03%) whilst silver is positive by +0.5%. The big mover seems to be a rebound on oil which is just under +2% higher.

After another very choppy week of trading, the outlook for the DAX appears to be lacking conviction. Stepping back, the market seems to have developed a three month consolidation range between 12,253 (the late July low) and 13,460 (September high). We recently discussed a couple of pivot lines within this range, at 12,630 and 12,800 and the market still seems to be stuck around this as a neutral zone. After last Monday’s sharp rally faltered the market has since been stuck and unable to make real direction either higher or lower. This culminated in Friday’s solid positive candlestick which came amidst a session that closed lower. It means that significant initial selling was bought into the close. Momentum indicators have tailed off and have lost their conviction at or around mid-points (although arguably tailing off just under neutral points lends a slightly negative bias). It means that the new trading week leaves the bulls needing to overcome resistance at 12,875 to improve the outlook within the range again. Early signs on the futures suggest a solid start to the week could bring a test of 12,875 into site. A closing breakout would be a bullish signal within the range again. This is also leaving behind 12,540 as initial support. 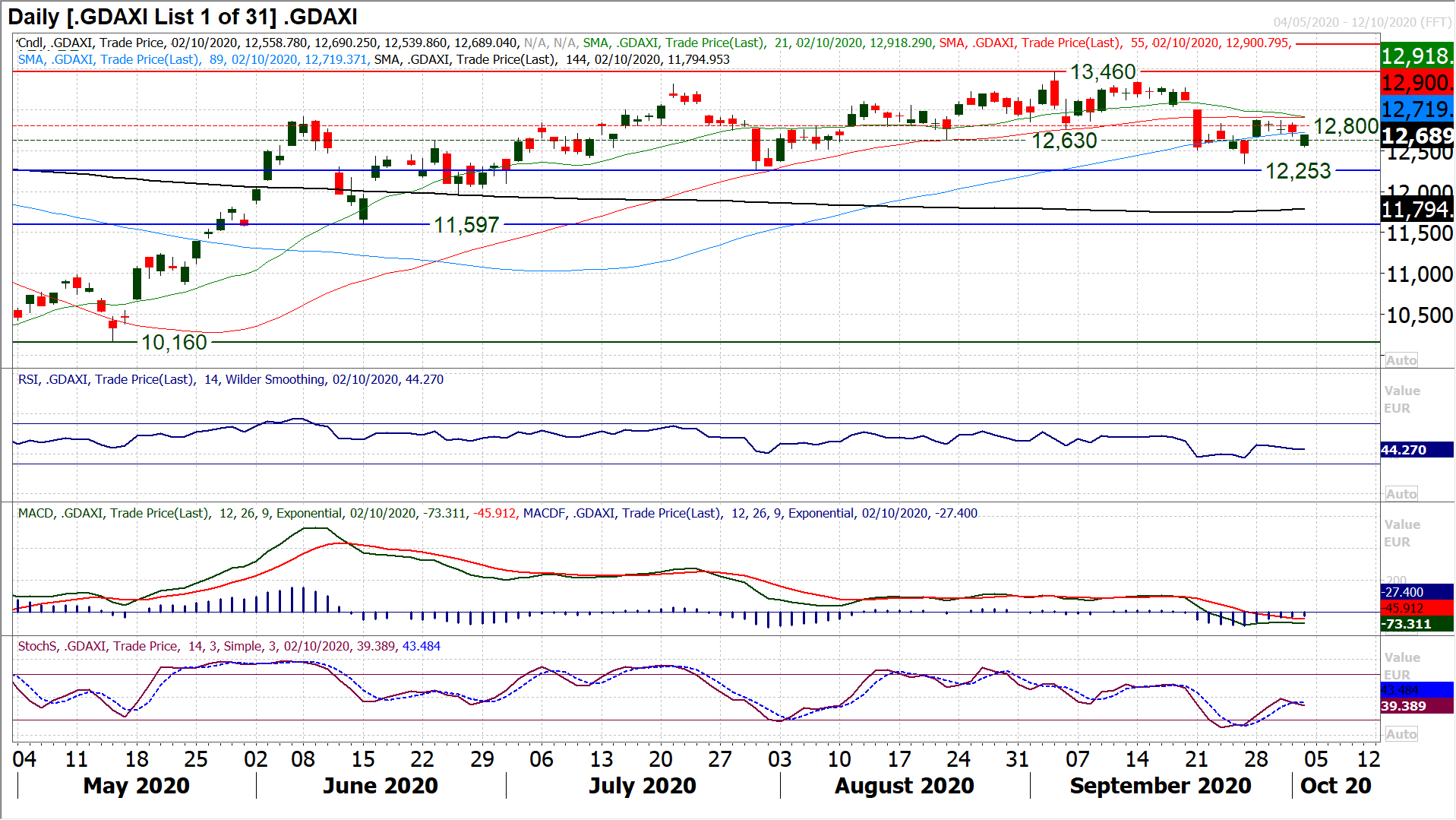 The pair still stands at a crucial near to medium term crossroads as the old support band 1.1695/1.1750 continues to contain recent price action. Add to this the barrier of the four week downtrend (today at 1.1765) and the importance of this period of trading grows further. Momentum indicators picked up early last week as EUR/USD rallied from 1.1610 and they also sit around important neutral levels. The RSI especially, flattening off around 50 is key. After Friday’s decisive negative candle which stopped the bull recovery momentum, it means that a second negative candle today with a close back under 1.1695 would begin to increase the downside pressure. However, the bulls are holding firm this morning to leave the market on a knife edge. Having consolidated for a number of sessions, a close above last week’s high of 1.1770 would be a decisive positive signal. However, for now, this is an uncertain market. 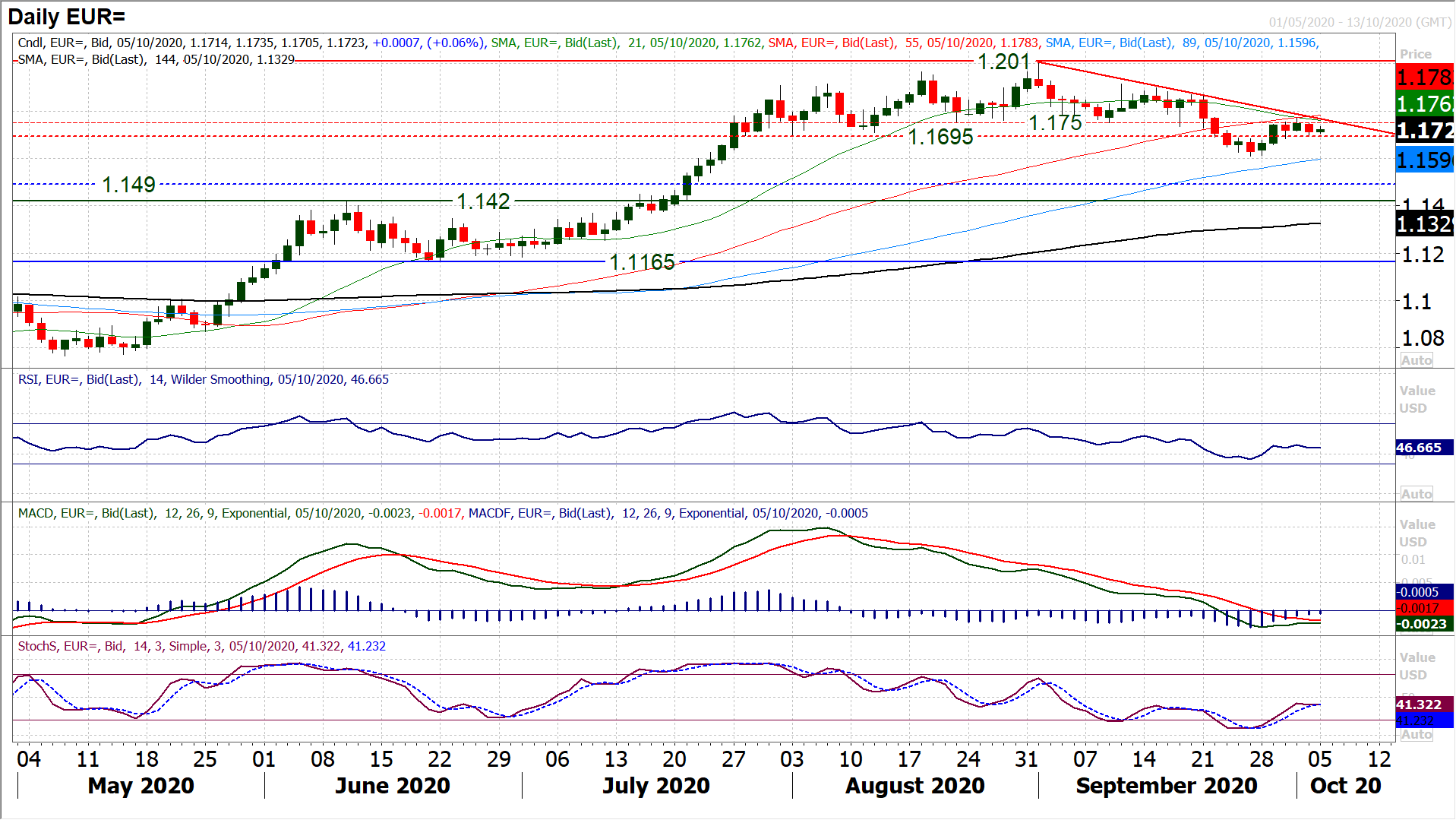 Cable is looking to edge higher even amidst the uncertainty of a number of hugely significant fundamental factors weigh into the near term price action (Trump’s health and Brexit trade negotiations primarily). Cable moved higher on Friday with a sense that near term weakness still remains a chance to buy. We have previously talked of a pivot around 1.2860 and closing above here is still a gauge for the bulls to remain in control. An early consolidation today and newsflow is once more likely to be a driver. We still see the market trading under 1.3000 and until the bulls can break decisively clear, we only see a market lacking real direction. 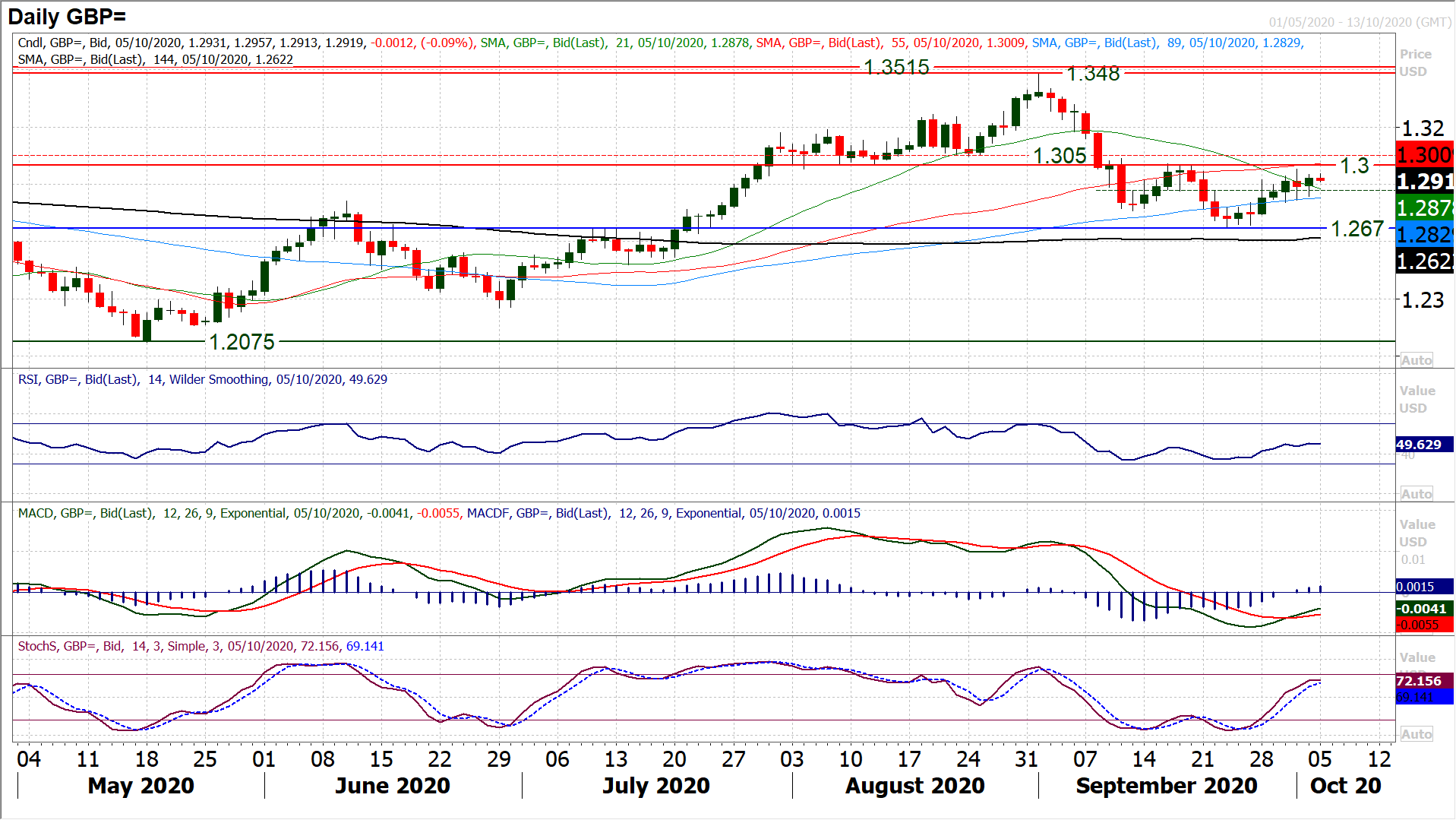 With a multitude of fundamental and newsflow factors pulling the pair higher and lower on Friday, the rather uncertain candlestick (long upper and lower shadows with a small body) leaves a degree of uncertainty in the market. However, the way that Dollar/Yen fell like a stone initially on Friday morning, it would suggest that it is a prime play for the Trump newsflow. A complete unwind of the move, with initial gains today now leaves the market back at the technical key resistance of the three month downtrend and 55 day moving average (currently 105.80). This is where the bulls need to step up and show themselves if they want to change this outlook which continues to be one to sell into strength. Having seen rallies fade so consistently, we look for another failure under 105.80 (also last week’s high) favour using intraday strength as a chance to sell. We look for likely renewed pressure on 105.10/105.30 support, with a close below opening the downside again towards 104.00 once more. 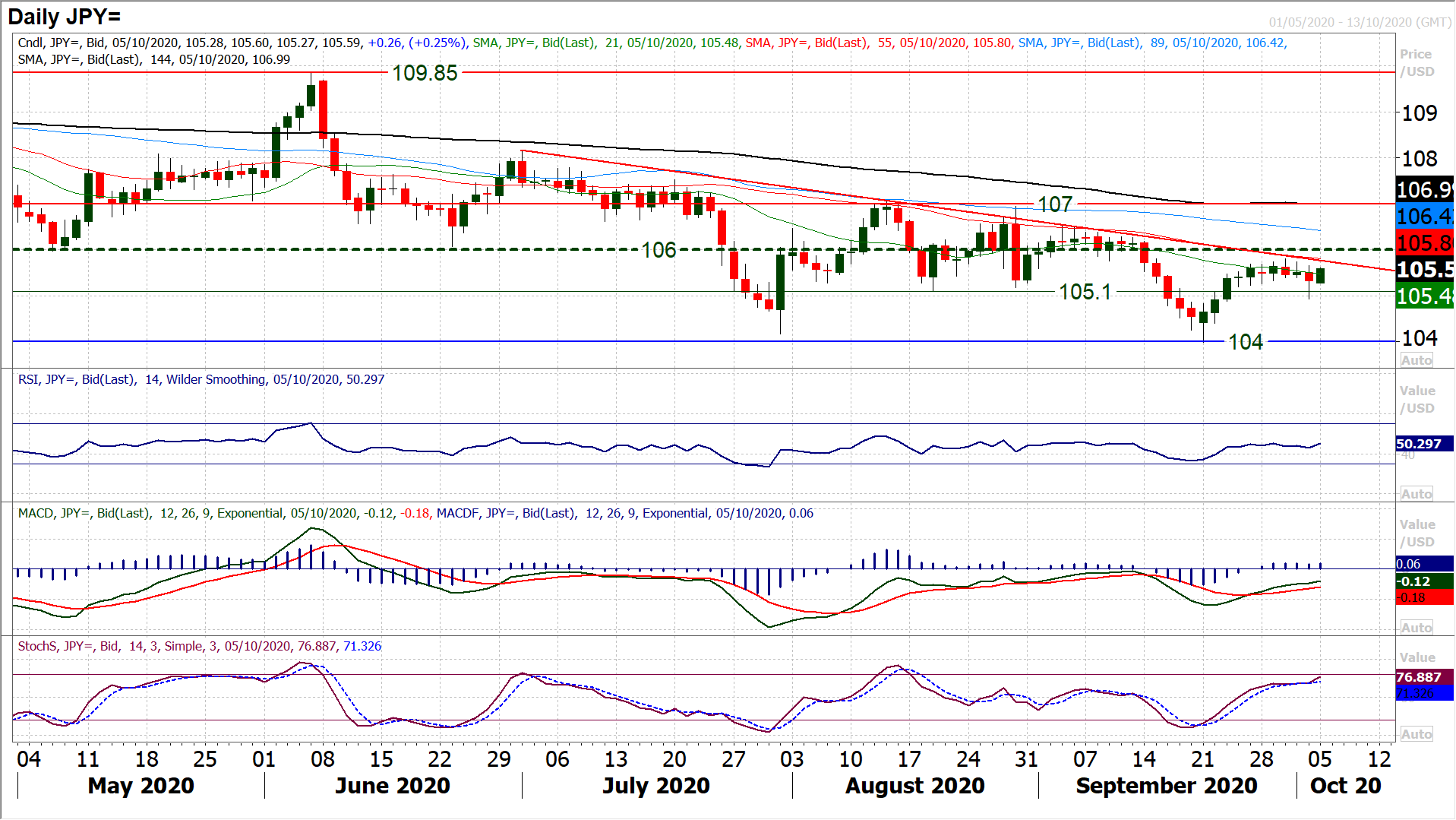 Our concern with the rally on gold has always been that the significant overhead supply between $1902/$1926 would see the bulls struggle. Is it a decisive bull recovery or a near term unwind before continued correction. The market remains at a crossroads but a close back under $1900 on Friday and early weakness today leaves the outlook for the bulls looking precarious again. The RSI unwinding towards the high 40s and then turning back, whilst the Stochastics are losing their upside momentum too.  The hourly chart shows initial support around $1889 is now being tested this morning, but a move back under $1881 would be a sign of bull failure. The hourly momentum indicators do not bode well either. The hourly RSI is now around 5 day lows (under 40), whilst hourly MACD lines are around 5 day lows under neutral. Another bull failure under $1900 would add to a growing sense that the buying pressure is drying up. Resistance at $1917 is becoming increasingly important near term now. 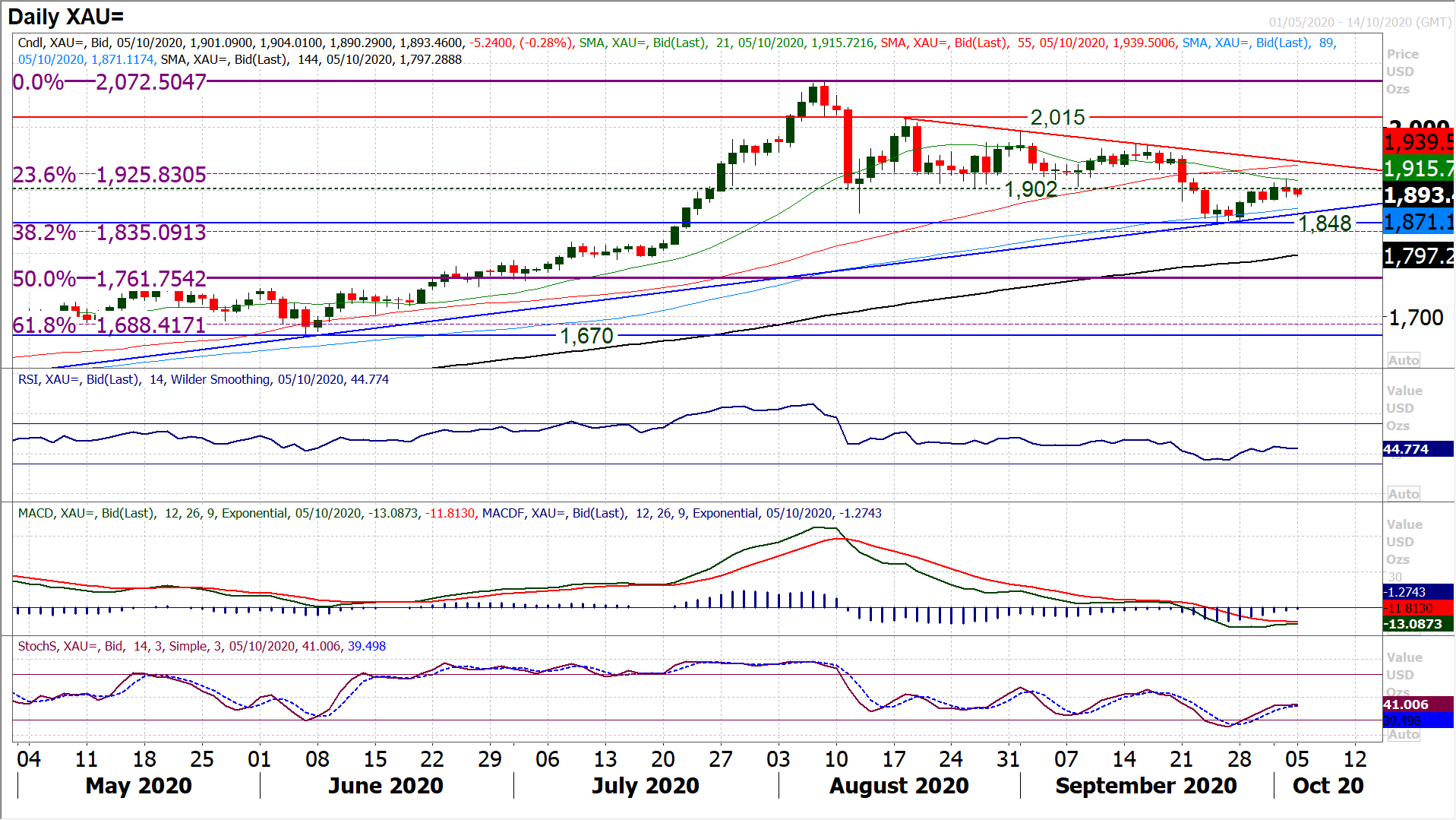 Markets are still in a period of elevated volatility following the news of Donald Trump. Oil appears to be one of the more reactive markets. Sharp falls on Friday on Brent Crude breached $39.30, although it all but hung on to this level into the close. However, with a more positive view this morning, we see oil bouncing over +2% higher. Once there is clarity over President Trump’s health then maybe a more definitive outlook on oil can be taken. Technically, a bull failure under $41.30 would give a sense that pressure towards $38.80/$39.30 is more likely. There is a negative bias to momentum now with RSI consistently under 50. This suggests using rallies as a chance to sell. 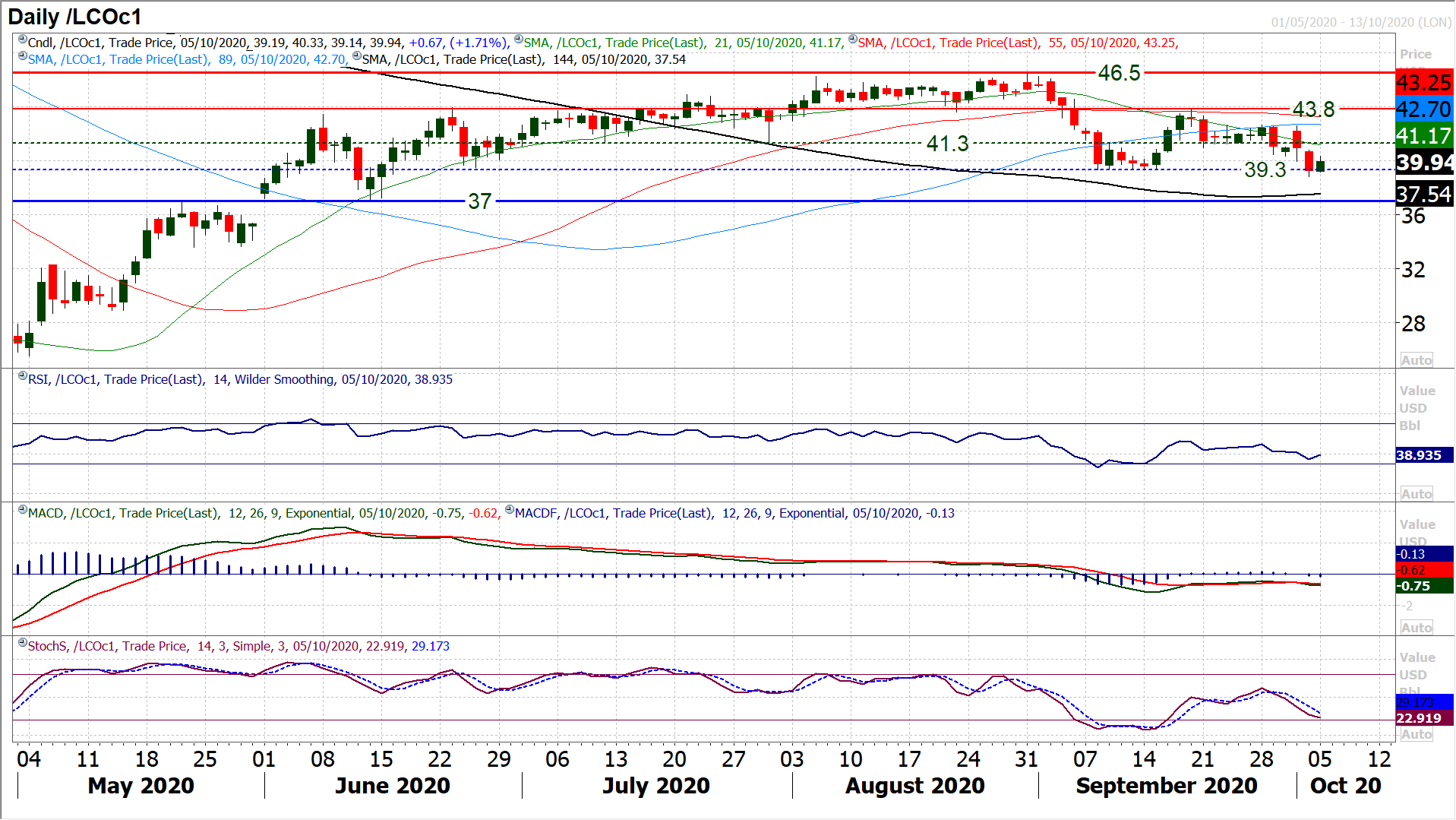 Wall Street is still reacting to the news of President Trump’s health after his infection with COVID-19. Selling pressure on the Dow on Friday, but a close well off the lows of the session came as traders tempered their fears somewhat. On a technical basis, coming back to find the old 27,445/27,580 pivot band now a basis of support is important. With futures ticking higher early today, the bulls will be hoping that they have managed to ride out the storm and they can get back on track. With price action of the past week, we now see 27,340 (which was the low of last week) as the key near term support and the bulls will be looking to pressure 28,040 and above. However, this is still a very volatile period though and markets can (and are highly likely to) swing on newsflow surrounding Donald Trump’s condition. 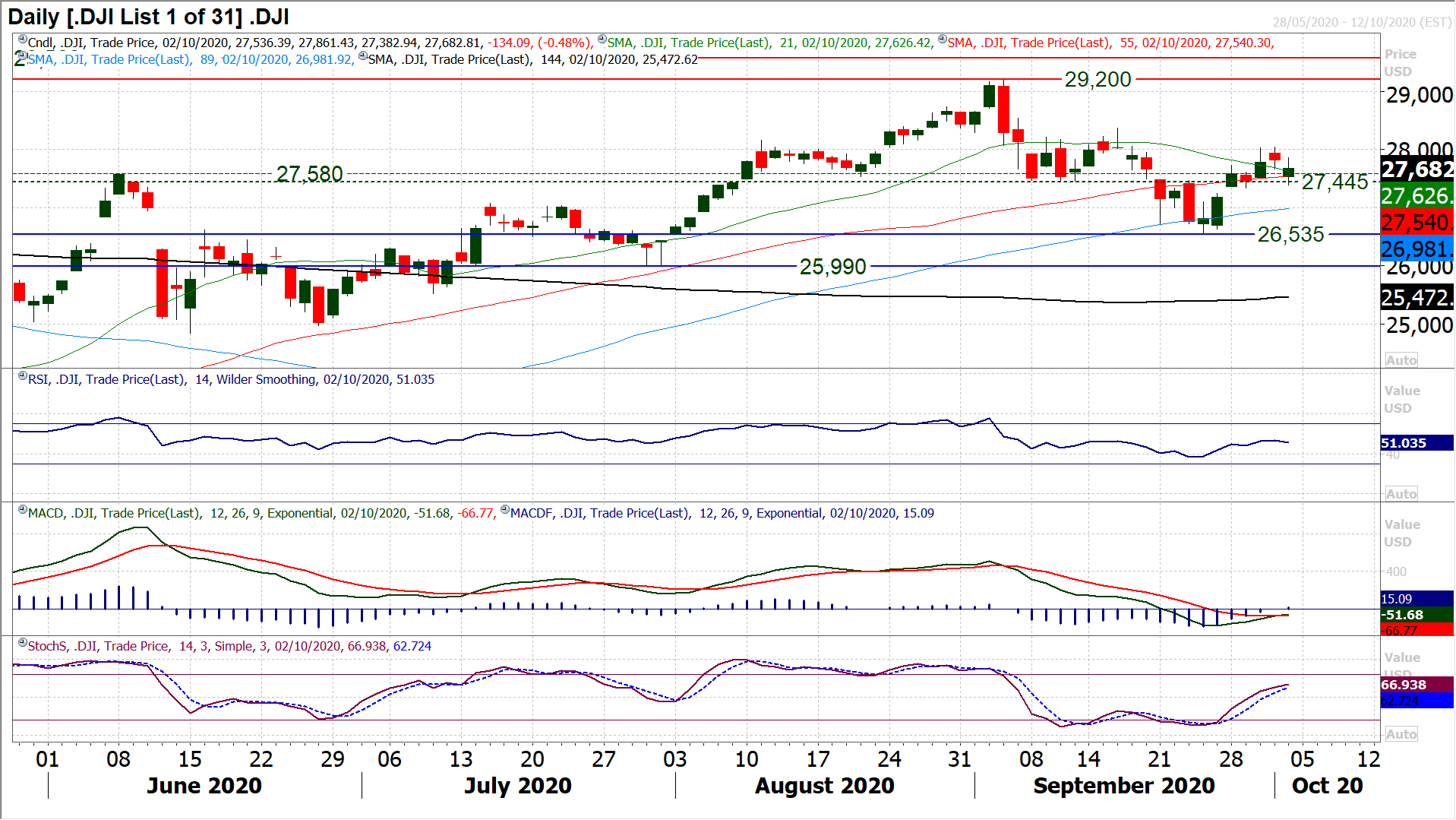