Momentum is really taking hold in this risk off, dollar rally now. In the last few days there has been a real shift in outlook, with the fears mounting over the implications of COVID second waves in countries across Europe and the US. Safe haven flows continue and the US dollar is benefitting from that. The significant dollar negative positioning that has developed over the past few months is driving traders into a short-covering dollar rally now. The comments of Fed chair Powell have hardly helped to stem the tide either. Powell noted yesterday that fiscal support for the economy is vital in the battle against the impact of the pandemic. However, it seems increasingly unlikely that Congress will be able to agree anything this side of the Presidential election in November. That is not good for risk and helps to further fuel this flood back into the dollar. UK Chancellor of the Exchequer Sunak (finance minister) is though expected to announce new fiscal measures for the UK today, but it is in the US Congress where markets would really take notice. Fed chair Powell speaks once more today, this time with Treasury Secretary Mnuchin too. Will Mnuchin signal some much needed fiscal response? 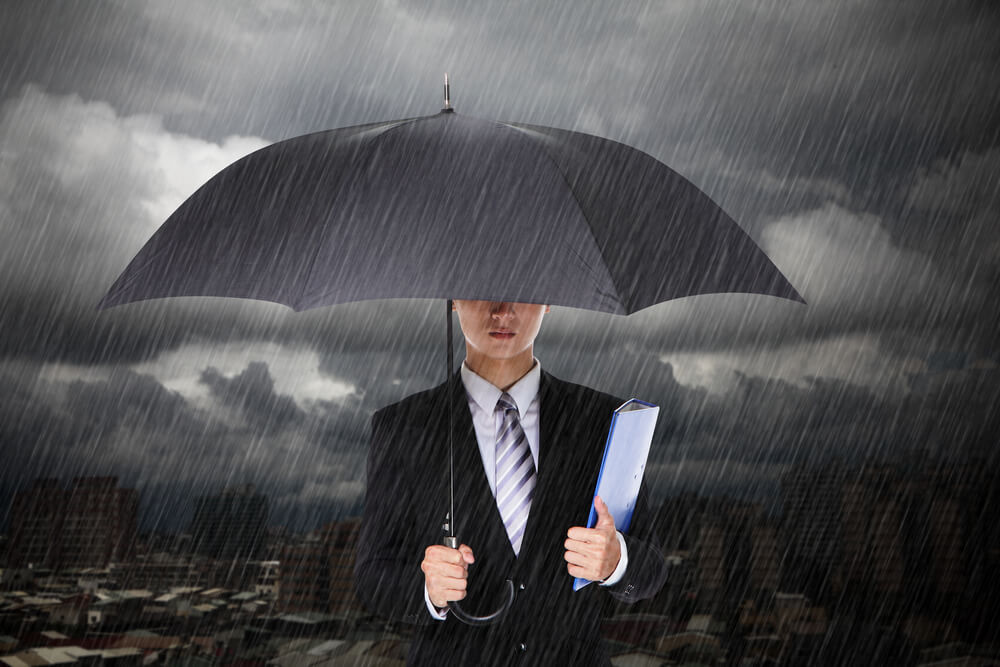 Wall Street closed sharply lower once more, with the S&P 500 -2.3% down at 3237. US futures continue this selling pressure today with the E-mini S&Ps -0.5%. Asian markets were also lower overnight, with the Nikkei -1.1% and Shanghai Composite -1.6%. European markets show no signs of changing this trend either with FTSE futures -1.2% and DAX futures -1.4%. In forex, it is risk negative , USD positive again, with JPY the main outperformer as AUD and NZD suffer. In commodities, selling pressure continues to see silver plummet further, whilst gold remains under pressure from the dollar strength. Oil has dopped back -1% early today.

There is a European bias to the economic calendar today. With SNB monetary policy first up at 0830BST, there is no change expected to the deposit rate of -0.75%. Then the German Ifo Business Climate is at 0900BST, with a mild improvement to 93.8 in September (from 92.6 in August), driven by improvements in both expectations and current conditions. Later in the session the US New Home Sales are at 1500BST and are expected to reduce by around -1.2% to 890,000 in August (from 901,000 in July.

For a final time this week Fed chair Jerome Powell testifies before the Senate Banking Committee at 1500BST along with Treasury Secretary Steve Mnuchin about the CARES Act. Once more, any clarity on Fed monetary policy could drive volatility. There is another Fed speaker today too, with John Williams (centrist) at 1900BST. We also note that Bank of England Governor Bailey is speaking at 1500BST, with the focus still on the potential for negative rates.

Precious metals have come under huge downward pressure in the past few sessions, with silver getting pummelled. As we always say, silver is “like gold on steroids”. Silver has plunged through the support after support with huge bearish candles. Support at $26 was first to go but this has now quickly been followed by a move below the $22.25/$23.40 support band of the late July consolidation and early August spike low. Moving so quickly below the Fibonacci retracements of the big bull run $11.62/$29.84 too we see bigger downside targets open. The market has paid almost no regard to the 38.2% Fibonacci retracement at $22.88 and now the 50% Fib at $20.73 is on. The next real price support is not until $18.35/$19.45. The risk is also that given the huge volatility to the downside, that intraday rallies can be equally as volatile. The old support band $22.25/$23.40  is now resistance. A move above $24.65 is needed to suggest any real rally of any substance is forming. 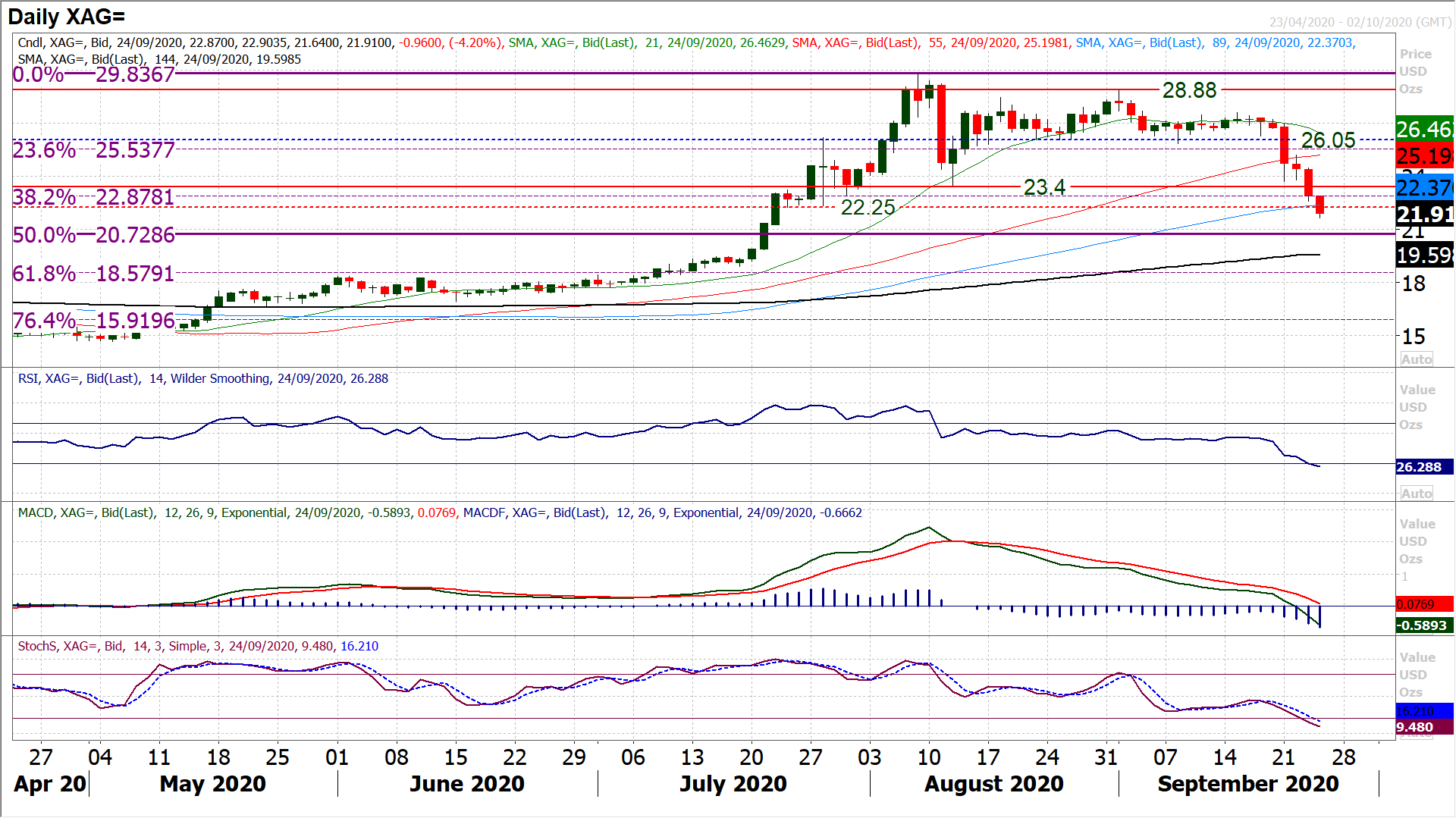 The dollar rally continues to drag EUR/USD lower. A breakdown below key medium term support at 1.1695 was certainly questioned during yesterday’s session, but the decisive move lower into the close really does confirm now that the outlook has changed. The closing breach of 1.1695 completes a top pattern of around 300 pips and implies a retreat towards 1.1400. Given that we see this as a bull market correction, the old breakouts of 1.1420/1.1490 are now a realistic downside target in the coming weeks. Momentum is increasingly correctively configured with near term rallies now a chance to sell. The old support band 1.1695/1.1750 is now an area of overhead supply housing stale bulls who bought the dips throughout August and September. These are now a source of sellers. The fact that EUR/USD had such a strong run higher through July means that there is little real support until 1.1420/1.1490 now. 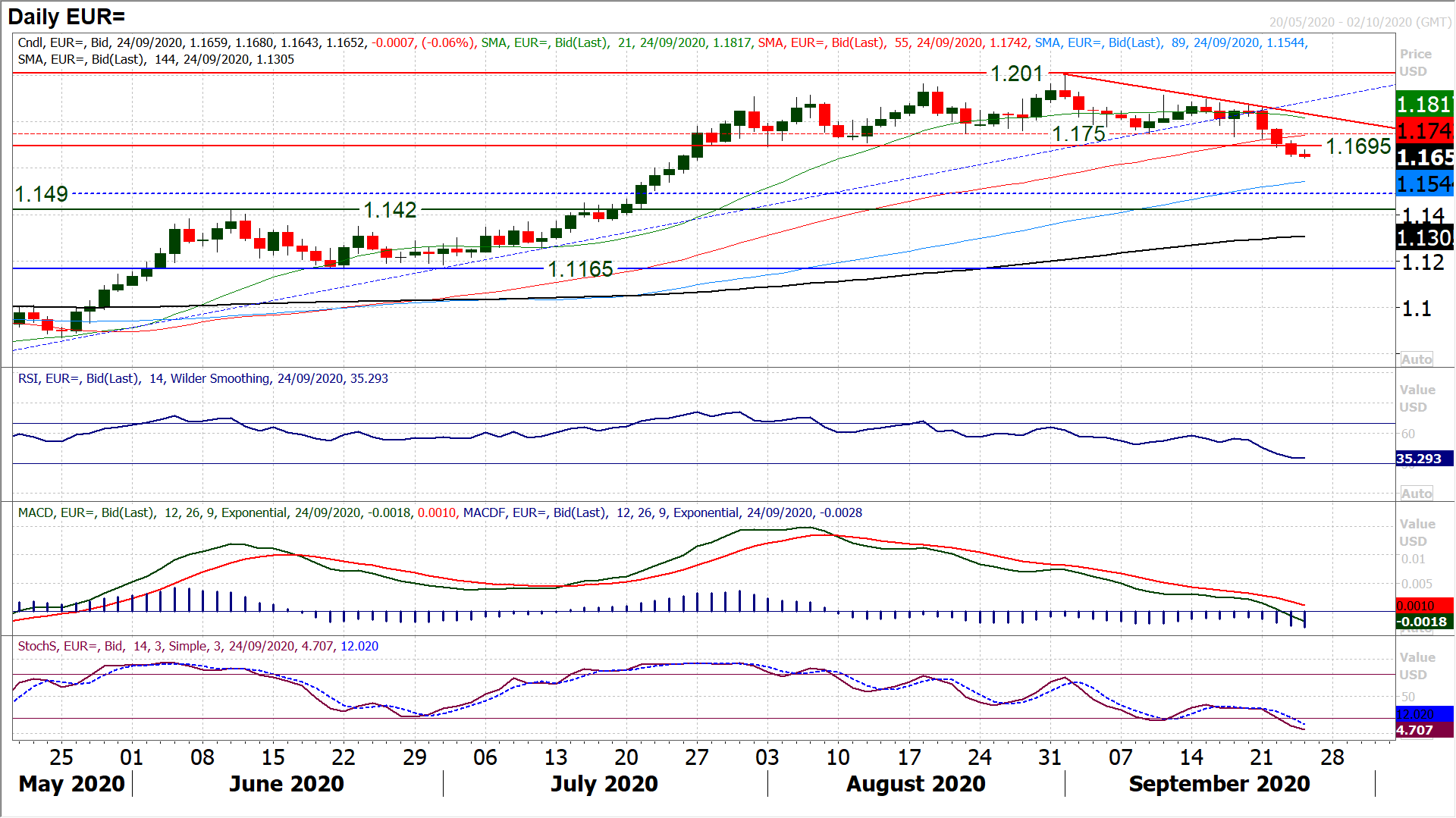 A second day of closing breach of 1.2760 shows that the downside pressure is still present for Cable. The market may have only closed marginally lower on the session, but the outlook remains corrective. This is backed up by negatively configured momentum indicators which suggest that near term rallies are a chance to sell now. The downtrend of the past three weeks falls at 1.2860 today. We look for pressure towards the next key support area around 1.2650 (old key breakout levels) but any failed move into the area between the old 1.2760 support and the downtrend at 1.2860 looks to be a chance to sell. How the market responds around the 1.2650 support will determine the next move, as a breach would really turn the market decisively corrective for potentially 1.2480 and 1.2250. 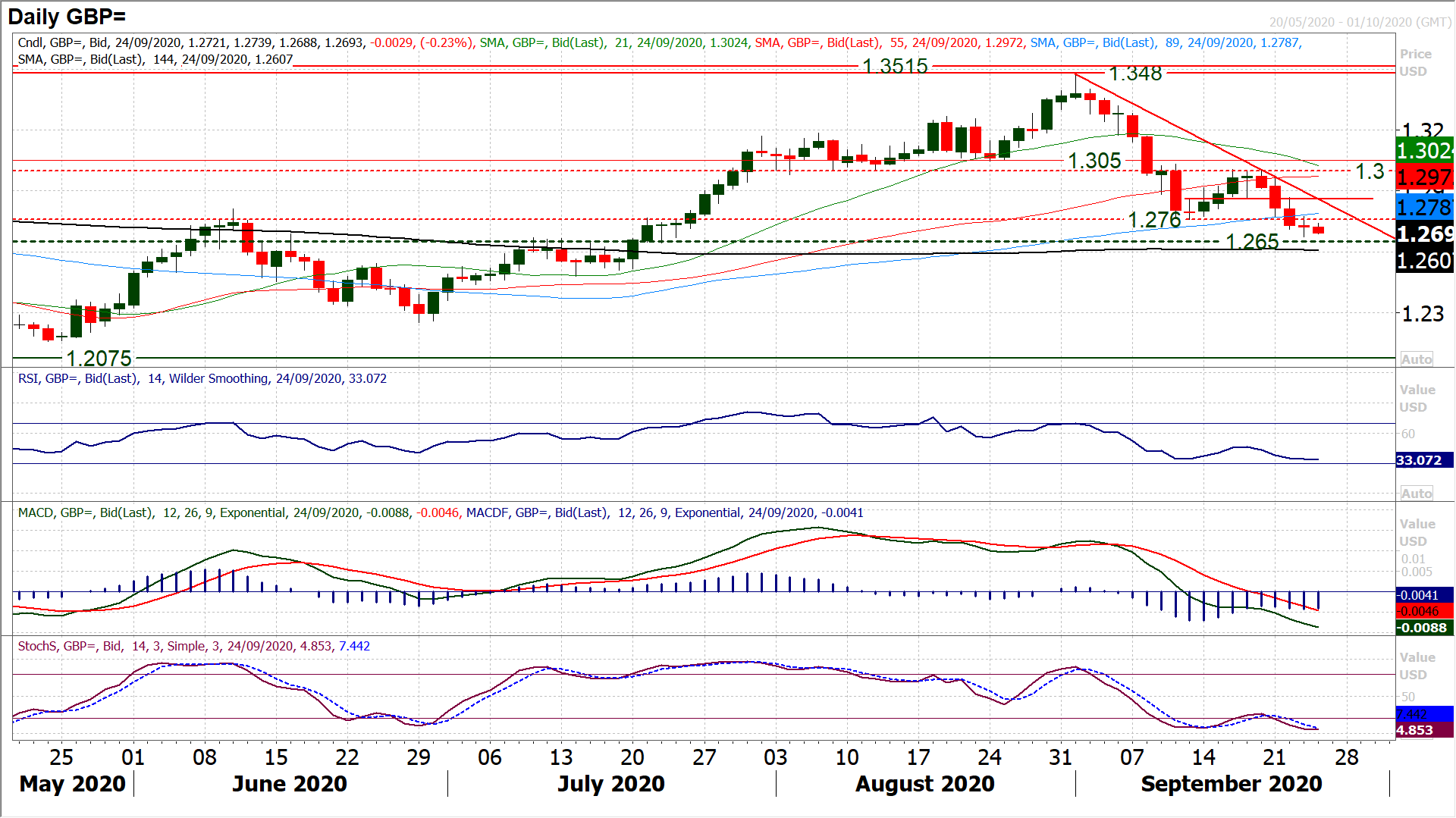 An third consecutive decisively positive candle reflects the impressive recovery that is driving Dollar/Yen higher now. This strong turnaround is shown in the fact that we now see repeatedly intraday weakness during the European session being used as a chance to buy in the US session. The hourly chart shows a small base pattern completed above 104.85 which is now a neckline support, in a move that implies 105.70. The daily chart shows the bulls pulling through the resistance 105.10/105.30 of the overhead supply from old August lows. This should now open the way towards a recovery to 106.00 in the coming days. It also means that 104.85/105.30 is a band of support now. Momentum is strong in the move, with Stochastics and RSI swinging higher, whilst there is still upside potential in the move (RSI has hit the mid to high 50s in previous rebounds). We look to continue to use intraday weakness as a chance to buy into this near term recovery which looks to be unwinding the market back towards the three month downtrend again (currently around 106.00). 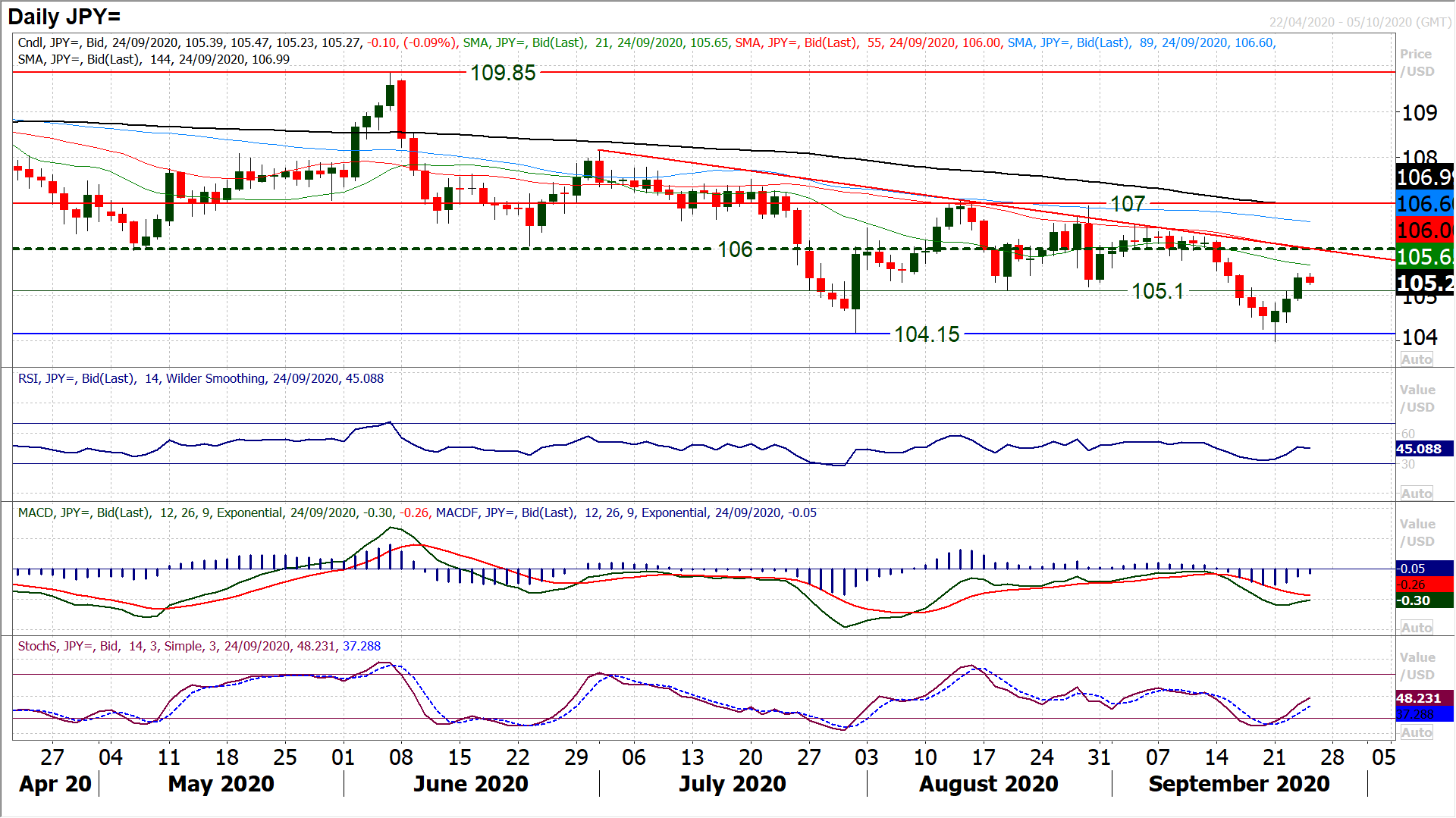 The dollar strengthening has really had a negative impact on gold. The price has driven decisively lower in the past few sessions, with key support levels breached. The move is continuing lower today. The rejection of the support around $1902 has been developing but as the US session took hold yesterday another surge of gold selling has pulled the market to what is now a two month low. There was some consideration given to the spike low of $1863 overnight, but the bears continue to drag the market lower today. Having broken decisively clear below the 23.6% Fibonacci retracement (of $1451/$2072) the implication is a move to the 38.2% Fib level at $1835 now. However, if gold is anything like silver then the 50% Fib level may be also on the cards (at $1761). The first real price support is now not until $1789/$1818. We increasingly look to use near term strength as a chance to sell into this continued correction. The hourly chart shows a very near term downtrend around $1870 this morning, whilst the old $1863 support is resistance now. 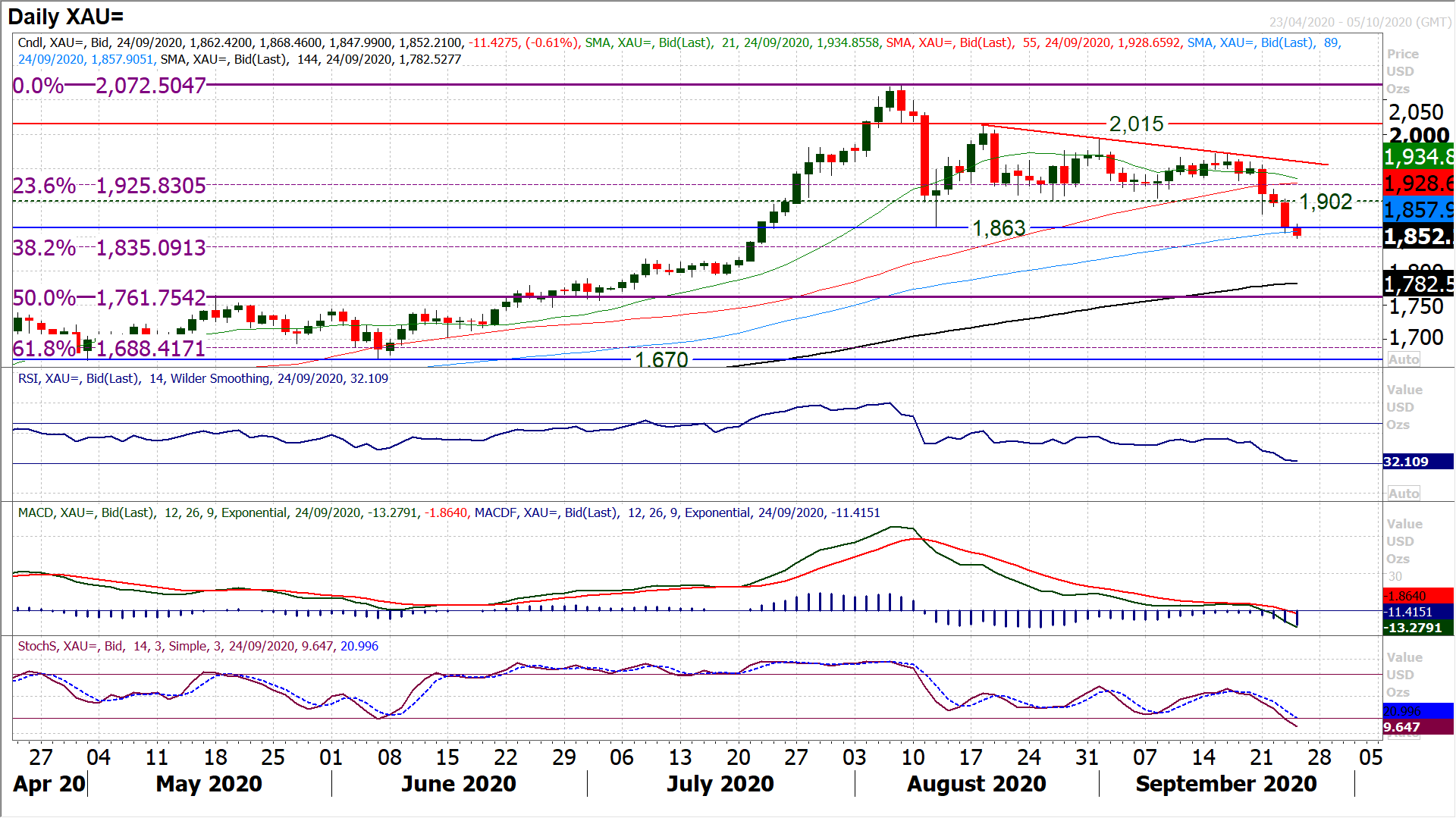 The bulls are fighting hard to prevent renewed selling pressure from taking hold. It had looked early yesterday that a further negative session was forming, but the support around $41.30 held firm. Another very neutral, small-bodied candle reflected a second session of consolidation. However the pressure continues on $41.30 today and a closing breach of what has become a pivot would open a retest of $39.30 support again. Momentum indicators reflect the consolidation and there is only the slightest of negative bias (with RSI a shade under 50). If you take a step back, we see that oil is effectively in a broad range now $37/$46.50. The support at $39.30 and resistance at $43.60 are initial moves around a mid-range pivot at $41.30. Subsequently we are neutral. 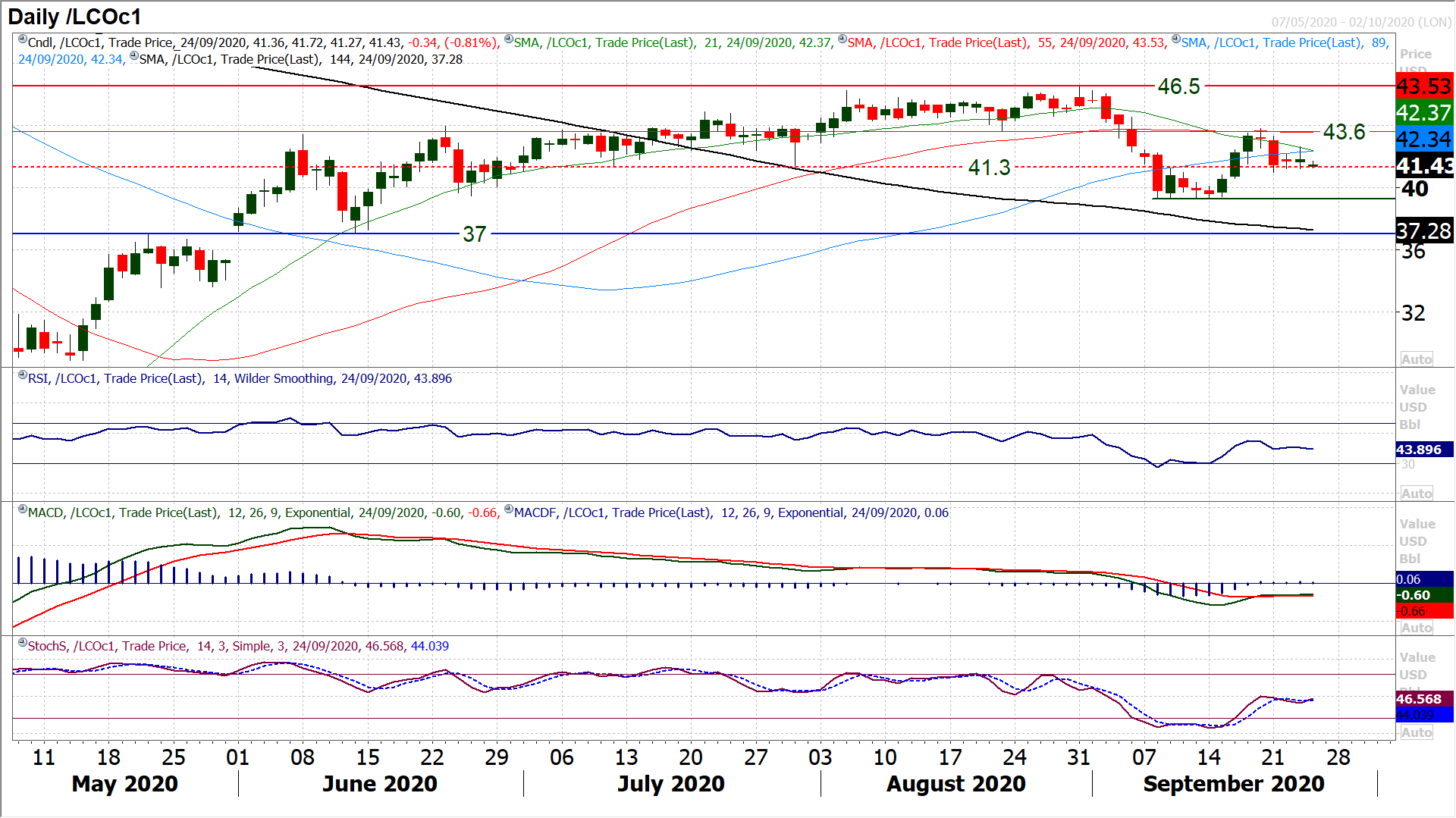 A pullback rally failure around the neckline of the six week top pattern adds significant weight to the increasingly corrective outlook now. After ticking mildly higher around the open yesterday, the Dow turned back at 27,464 which is right in the middle of the resistance band 27,445/27,580 to fall sharply and form a decisive bear candle. Although initial support at 26,715 held, futures are lower again today and this will likely be broken now. The way is open to the next support at 25,990 whilst the top pattern downside implied target of around -1750 ticks suggests 25,700 could be seen. Momentum is increasingly corrective to imply that near term rallies (such as Tuesday and early Wednesday) are a chance to sell. Initial resistance is at 26,990. 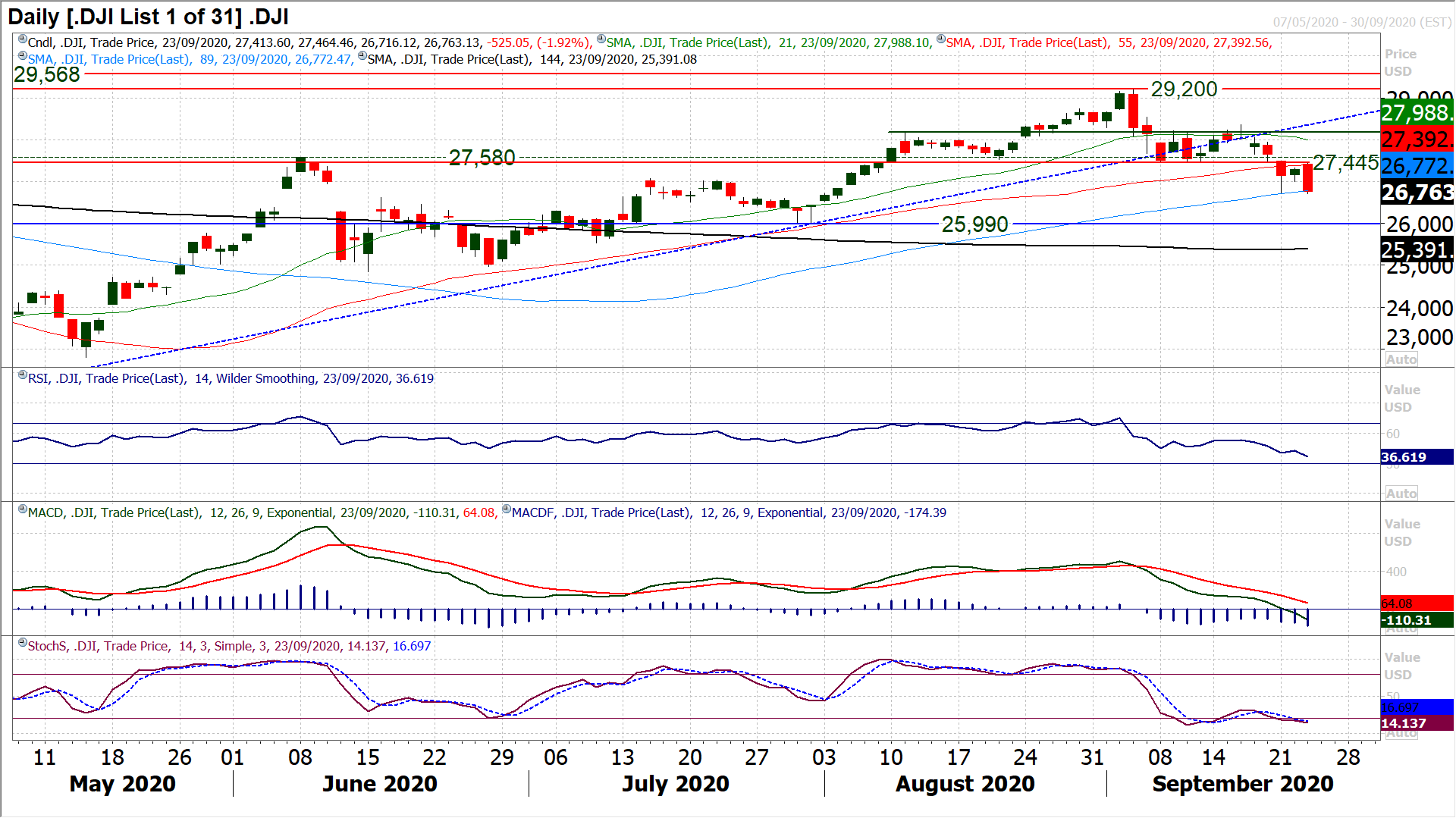