There is a sense that a consolidation that has run through the weekend is still broadly present across major markets today. However, this comes with a slight renewal of USD weakening too. There has been a mild sense of relief that a six month review of the US/China phase one trade agreement progress has been postponed, with some reports suggesting it is to give the Chinese more time to increase US imports. This delay to the US/China trade review is a release of a degree of risk in trade tensions, and should help to support risk appetite early this week. The Dollar/Yuan rate is testing recent lows again (often a barometer of risk sentiment). The nascent dollar rebound which had threatened into the middle of last week is now tailing off once more and consolidation ranges are forming across major forex. Despite this, the big moves seen in US bond markets and precious metals are moderating now. Adding into the mix of conflicting newsflow today is the announcement that Japanese growth came in slightly worse than expected. The New York Fed manufacturing data could shape sentiment this afternoon, but focus will already be turning towards the Fed minutes on Wednesday. 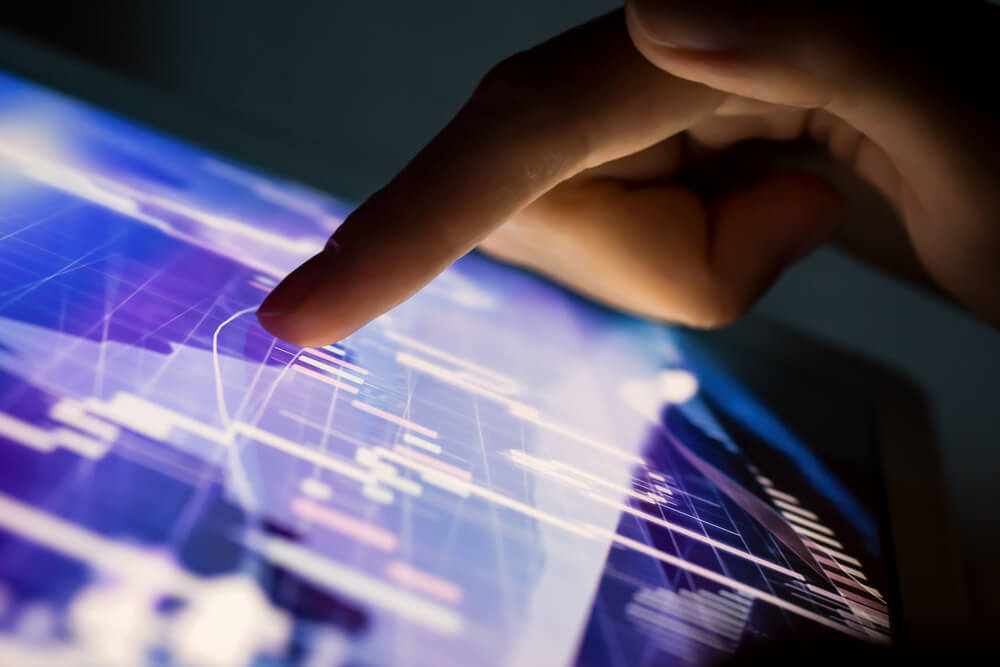 Wall Street closed mixed into the weekend, with the S&P 500 losing -1 tick to 3373, however, futures are higher this morning (E-mini S&Ps +0.3%). Asian markets were mixed overnight, with the Nikkei -0.8% in the wake of the GDP miss, whilst the Shanghai Composite was +2.1%. In European markets, the outlook seems to be more cautious, with mild early weakness on FTSE futures -0.1% and DAX futures -0.2%. In forex, the USD negative bias is coming through the major pairs, with only really NZD not feeling the mild benefit. In commodities, the precious metals of gold and silver are running higher along the lines of dollar weakness, whilst oil is between a half and one percent higher.

It is a quiet European morning on the economic calendar so we look ahead to the US session. The New York Fed’s Empire State Manufacturing is at 1330BST and is expected to show the recovery of the past few months just rolling over slightly in August with a drop back to +15.0 (from +17.2 in July).

Chart of the Day – EUR/AUD

We continue to see a broadly improving outlook developing on Euro/Aussie, although a decisive break higher is yet to be seen. Breaching the last of the multi month downtrends, the pair has been steadily building a floor of support in recent weeks. This includes a pivot of support between 1.6350/1.6400 which is a higher band of support above the key floor 1.6030/1.6100. The market is close to forming a base pattern now. As the momentum indicators remain in their improving configuration, the potential for a breakout above 1.6585 is growing. If seen, this would be a key change in sentiment towards a more bullish euro positioning. The RSI has been holding above 50 for the past few weeks, Stochastics are also consistently positively configured and MACD lines are above neutral. It points towards weakness being bought into and anything towards 1.6350/1.6400 is seen as an opportunity to buy. The market seems to be positioning for a test of 1.6850 initially but a close above 1.6585 would be a two month high and complete a base pattern that would imply +550 pips of additional recovery in the coming weeks. Although the market is still stuck in this consolidation, it certainly seems that there is something of a recovery developing. Initial support 1.6460. 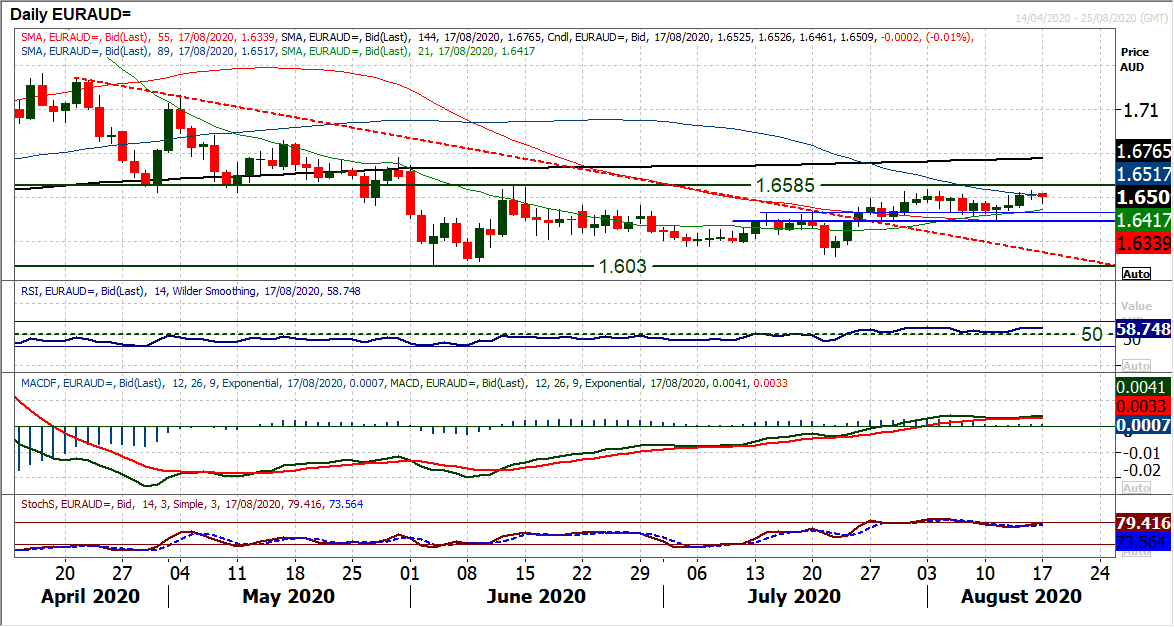 There is a growing sense of resilience in moves on the euro. A threatened dollar rally has lost its way in recent sessions and a positive bias is beginning to take hold once more on EUR/USD. With tests of the key support at 1.1695 having been contained, the bulls have now pulled together three consecutive positive candlesticks. Momentum indicators have moderated a threatened corrective slip and are looking to now regain a positive configuration once more. On the hourly chart, we have discussed a pivot around 1.1800 being an indication within the 1.1695/1.1915 trading range. With the market now holding consistently above this (using a support band 1.1780/1.1800) the bulls are looking to build a stronger position again. Essentially, though, the market is still stuck in what is now a three week consolidation range and until there is a decisive breach of 1.1695 support or 1.1915 resistance, there is a lack of conviction. It is just now that we are developing a mild positive bias within the neutral near term outlook. 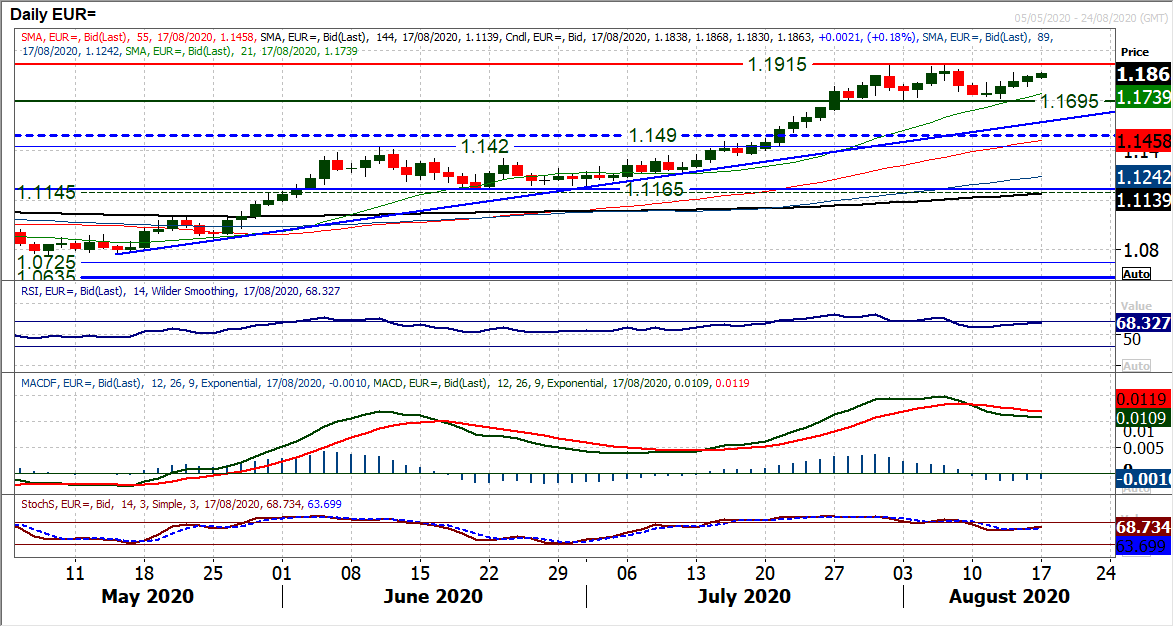 In a similar configuration to EUR/USD, a near term trading range also continues to develop on Cable. However, there is a less prominent positive bias on Cable. It is interesting to see that the long upper shadows of the candlesticks continues to be seen, which are reflective of a string of bull failures. How prominent these bull failures are will come to light if the dollar bulls begin to find some traction once more. There is a mild negative drift still present on MACD and Stochastics. This is not an issue now, but the strength of the Cable bulls is questionable and if tide does turn again and the dollar strengthens once more, there could be a more considerable swing lower. The market is trading around what is essentially mid-range resistance in the band 1.3100/1.3120, but unable to pull above it. There is a minor higher low around 1.3045 that needs to hold to prevent another drop back to pressure 1.2980/1.3000. After another bull failure on Friday at 1.3140, this needs to be overcome quickly to prevent becoming a basis of a mid range lower high. 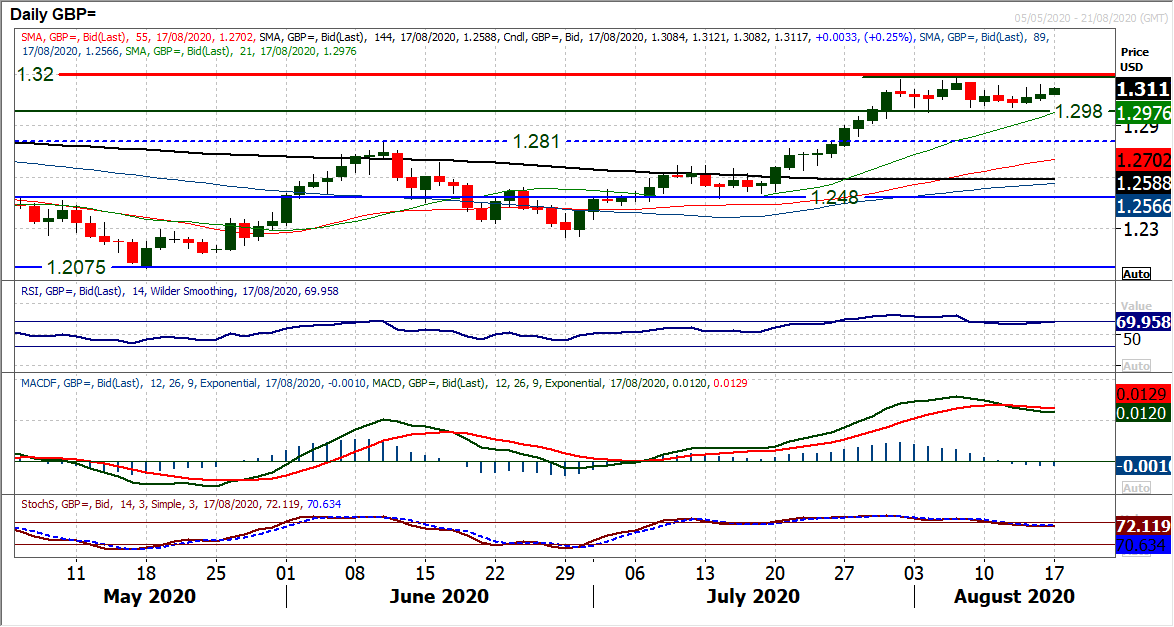 With risk appetite suffering on Friday, and the dollar also under pressure as Treasury yields fell, this played into  a drag lower on Dollar/Yen. A decisive negative candle breached the (admittedly sharp) two week uptrend and begins to now threaten the recovery prospects. We have long talked about a dollar recovery being short term and being the opportunity to sell on Dollar/Yen, however previously moving above 106.60 the market looked to be taking on a more improved outlook. Despite this, a failure around 107.00 in recent days and now the breach of the uptrend, leaves the improvement looking less secure again. We now look to how the market responds to this trend breach as an indication of the next move. Another negative close today, back under 106.45 (an old breakout support) would begin to generate more corrective momentum again. A negative candle today that moves to threaten 106.00 support, would renew the selling intent for pressure back on 105.30. It also means that the resistance around 107.00 is growing in importance as a potential lower high. 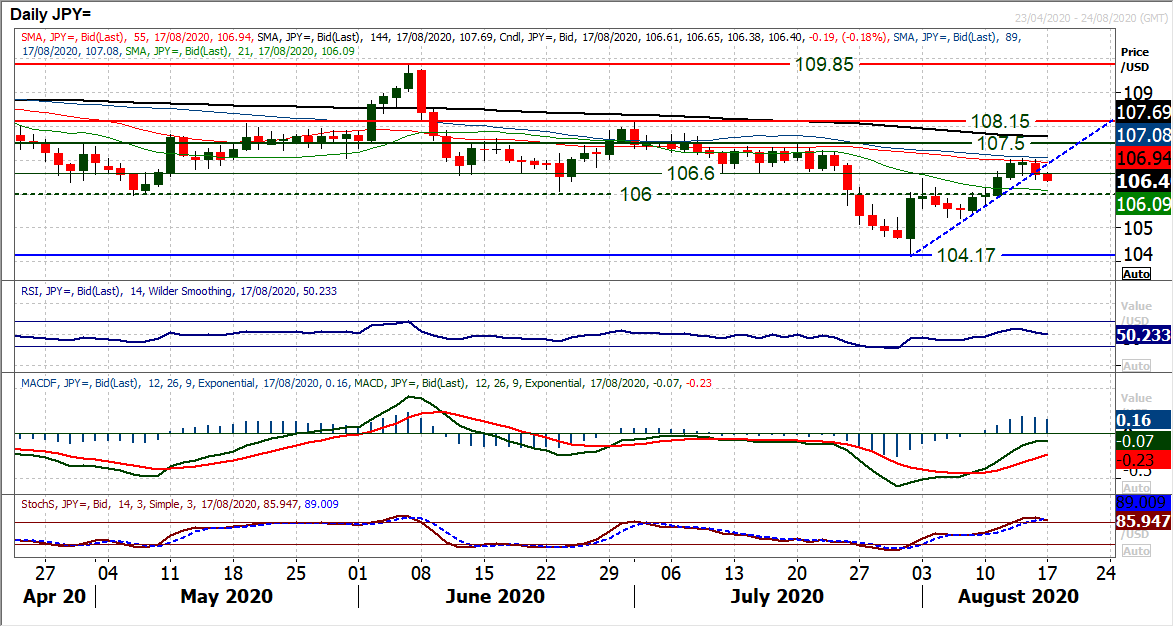 Since the huge volatility of early last week, that drove a significant 10% correction, the market has begun to settle down again. The issue for traders is whether the big shakeout has run its course, or whether there is another lurch lower yet to be seen. After Friday’s mild negative candle (an inside day session) just saw the impetus of a two session recovery being lost, there is a need for caution into the new week. We are minded that we believe there is an appetite to buy gold still but near term technicals are likely to be shaped by events (the US fiscal support package is our primary concern). After the rally tailed off at $1963, the market has moderated the near term volatility and a consolidation between $1920/$1963 is developing. This seems to be a market now biding time for something to generate the next move. The FOMC minutes this week are a possible key driver, whilst newsflow on the fiscal support package will also be watched. Initial resistance at $1955. 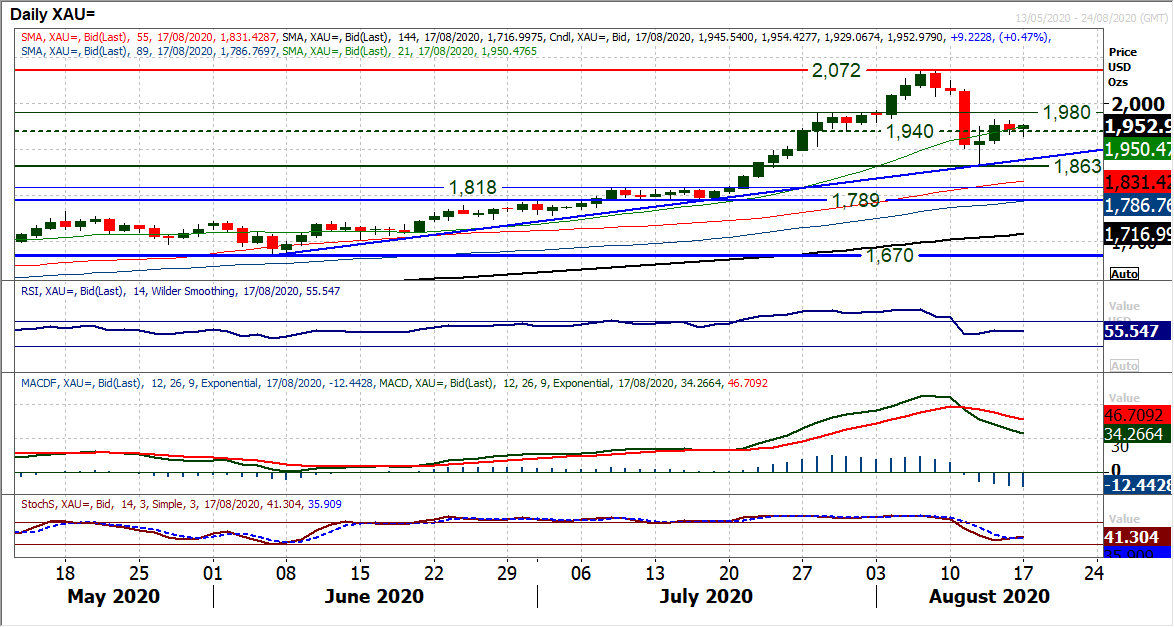 Oil continues to consolidate. Although there is still an underlying bias to support weakness in Brent Crude, managing to drive the market higher is a different matter. The latest support has formed between $44.25/$44.50 in the past week and a half but once more it is still a market that lacks the drive to pull prices decisively higher and generate positive traction. Despite this, there is still a run of higher lows intact where $41.30 is still the first important support. With a broad positive bias of momentum, we still see near term corrective moves being bought into for what is still favoured to be an eventual positive breakout. Resistance at $45.80/$46.25 is likely to be breached at some point, but we are not expecting a huge run higher on a breakout. The next real medium to longer term resistance is $53.10/$53.80. 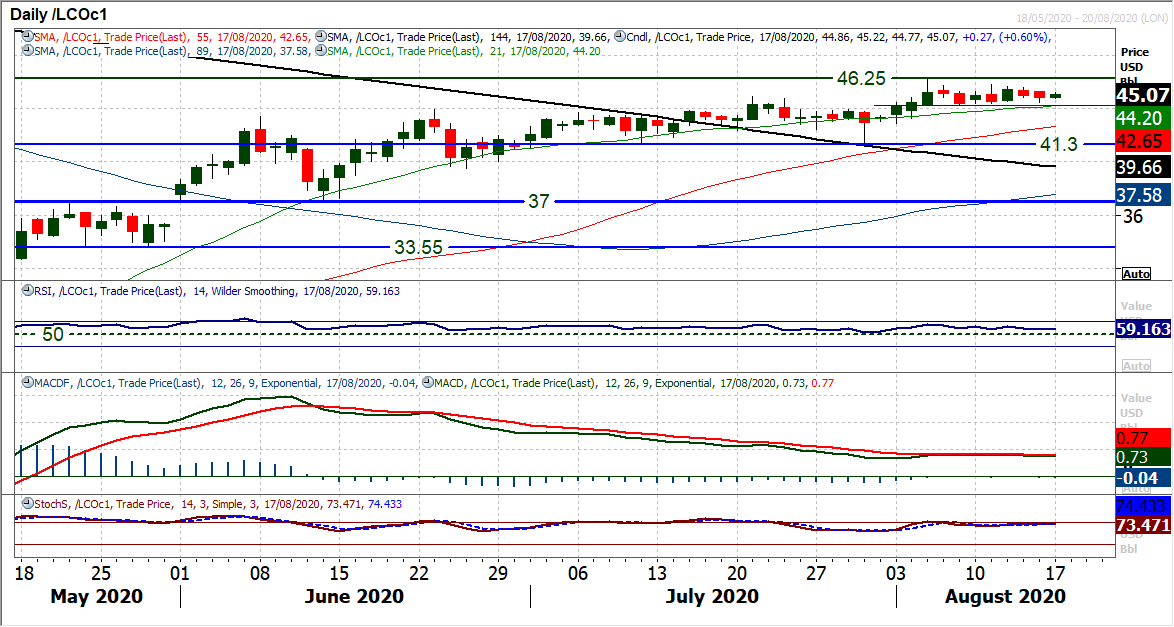 The rally on the Dow has lost impetus in the past few sessions and a drift consolidation has set in. At this stage, it seems to be little more than a pause for breath and the driving force that pulled the market through the key June resistance of 27,580 is still a factor. There is a band of breakout support between 27,580/27,625 which is still housing good underlying demand were there to be a near term slip back. Momentum remains positive, but is slightly stretched, with the RSI in the high 60s. As yet there are few corrective signals, and even today the hourly chart shows there has been a degree of unwinding during this short consolidation. A move through 28,044 would open the rebound high of 28,140 again, whilst the old February bear gap at 28,400/28,890 would become the next key test. 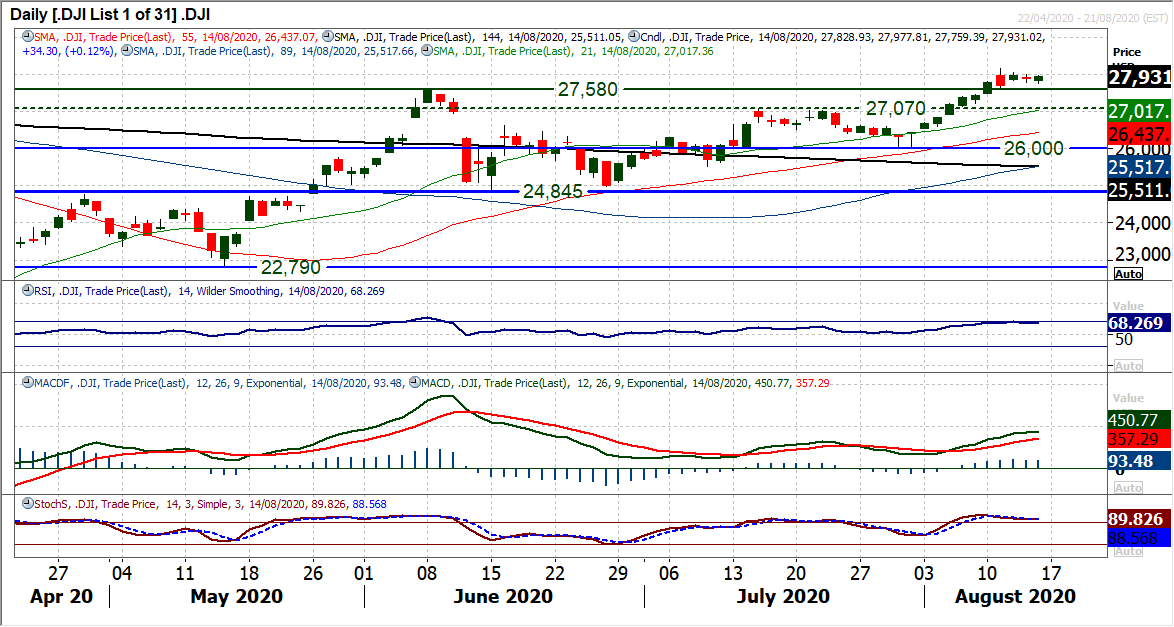