Markets are looking more settled in the early part of this week. A US public holiday seems to have come at the right time as the selling pressure of last week through equities appears to have turned a corner again. Treasury yields are looking stable today, whilst a strong European session yesterday is set to continue early today. As the week progresses, trader will become increasingly focused on the European Central Bank monetary policy decision. Euro traders seem to be increasingly on tenterhooks. There are a few mixed factors coming out of the Asian session. Japanese Q2 GDP was revised lower but came in better than expected, whereas President Trump has suggested the potential to decouple the US economy from China. Furthermore, there is an ongoing concern that the path of EU/UK post-Brexit trade deal talks is heading towards a dead-end. Quite how the EU would react anything other than negatively were UK Prime Minister Johnson to suggest a rewrite of the Withdrawal Agreement, remains to be seen. More talks are scheduled for today. The growing relative weakness of sterling reflects the growing concern of the market. 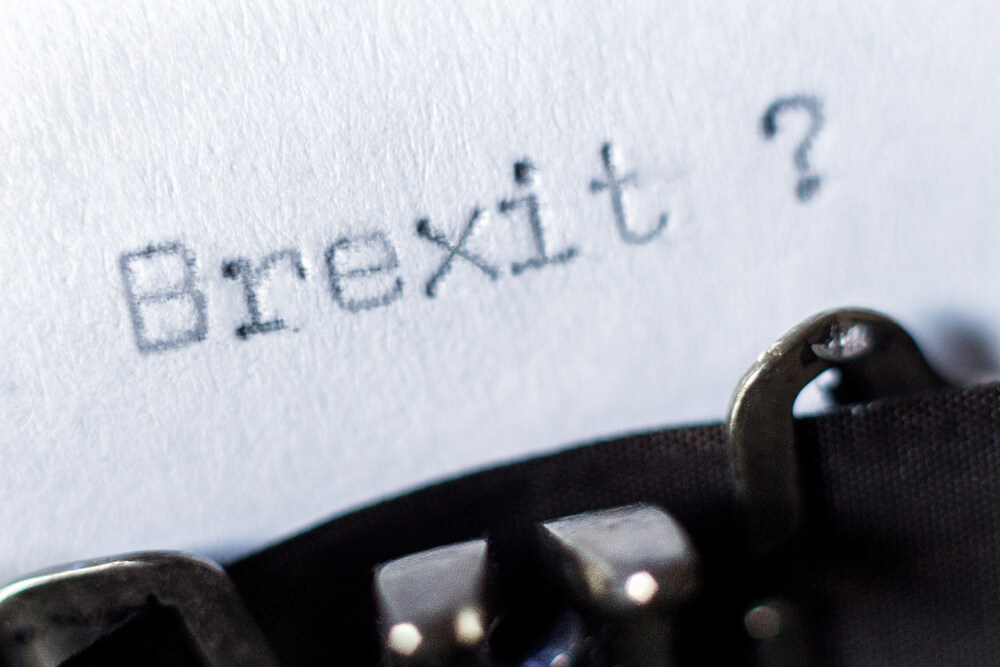 Wall Street was closed for Labor Day yesterday, but futures are ticking positively early today to suggest that the recent selling pressure has been relieved. E-mini S&Ps are +0.6% early today. In Asia, there has been a mildly positive session, with Nikkei +0.6% and Shanghai Composite +0.8%. European futures are also gaining, with FTSE futures +0.3% and DAX futures +0.4%. In forex, there is a mixed outlook, with GBP still under pressure, whilst AUD is performing well and USD is fairly mixed. In commodities, a mixed dollar outlook has allowed gold and silver to tick slightly higher, whilst oil remains under pressure amidst questions surrounding strength of demand and recent price cuts from Saudi Arabia.

It is a another quiet day on the economic calendar today, with no US data of note in the afternoon. So the focus is just on the “revised” Eurozone Q2 GDP at 1000BST. This is the third and final reading of growth numbers, and is expected to be confirmed at -12.1% (unchanged from the “flash” reading of -12.1%, after -3.6% in Q1).

Is a near term recovery looming? In the past few weeks, the market has been consistently forming support around the key psychological 0.9000 level (Swiss National Bank intervention?), building a floor. In recent sessions where the dollar has begun to strengthen, the rate is now picking up. Intraday moves above 0.9160 (previous lower high) have taken USD/CHF to a near four week high. With the market moving on today, a close above 0.9160 would be a move that begins to threaten 0.9200, the first real resistance for recovery. Improvement in momentum indicators is taking hold now, with RSI above 50 being the highest since May, whilst MACD and Stochastics also accelerating higher. The bulls need to really get through 0.9200 on a closing basis (the old mid-August high, but also basis of the key March low) to complete a base pattern and suggest sustainable improvement is building. This would then imply a rebound towards 0.9400 in due course. There is good near term support now at 0.9080, whilst the 21 day moving average bottoming out around 0.9100 is an encouraging signal too. For now this is a 200 pip range, but the development of indicators suggests that a recovery is certainly threatening. Above 0.9200 and we look to buy into weakness. 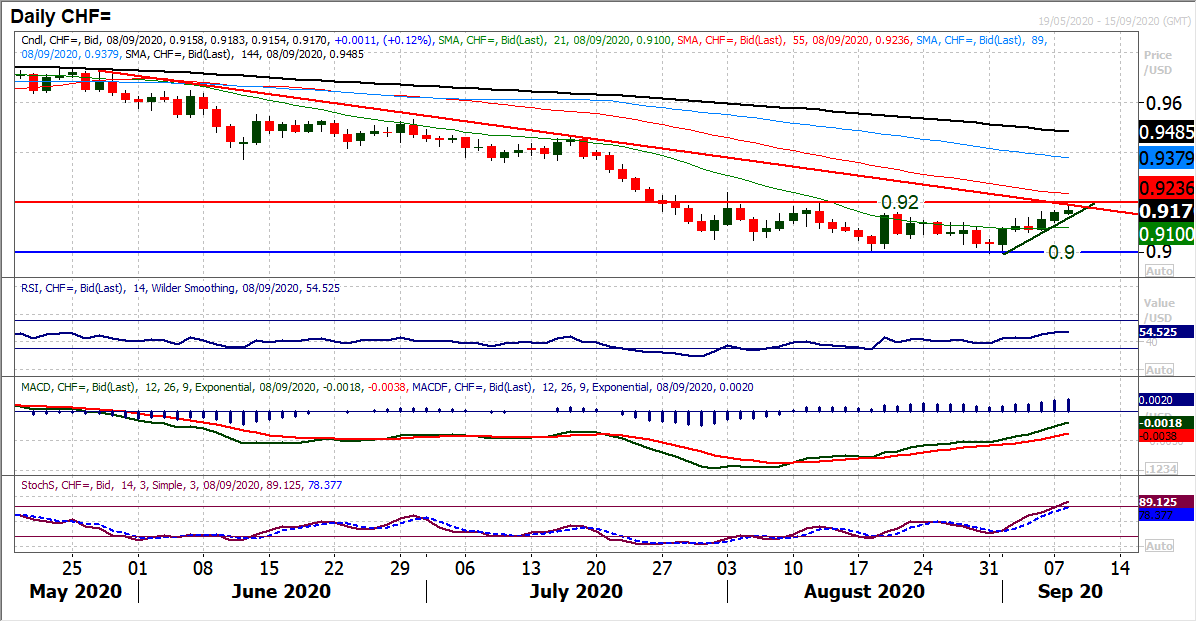 With the dollar rally turning a shade less decisive, a US public holiday yesterday and a very important ECB meeting on Thursday, EUR/USD has turned into more of a drift play. The drift is marginally lower still as the market seems to be unwinding into the support of what is nearing a four month uptrend (today around 1.1755). This seems to be a market waiting with baited breath now. For our strategy of buy into weakness to be sustained, this uptrend needs to be held. The support band 1.1695/1.1750 is key to this continuing. Ideally there would be a higher low around the 1.1780 mark. This is because momentum indicators are back to key medium term buying opportunity levels (RSI around 50, Stochastics drifting towards 30). However, if the buyers do not materialise and 1.1695 is broken then it would be a signal that a corrective move is taking hold that could drag EUR/USD back towards 1.1500 area again. Our preferred target of a retest of 1.2000 could be hampered by the ECB on Thursday. Given the recent drift, broader market uncertainty is rising too. Above 1.1865/1.1880 improves the outlook once more. 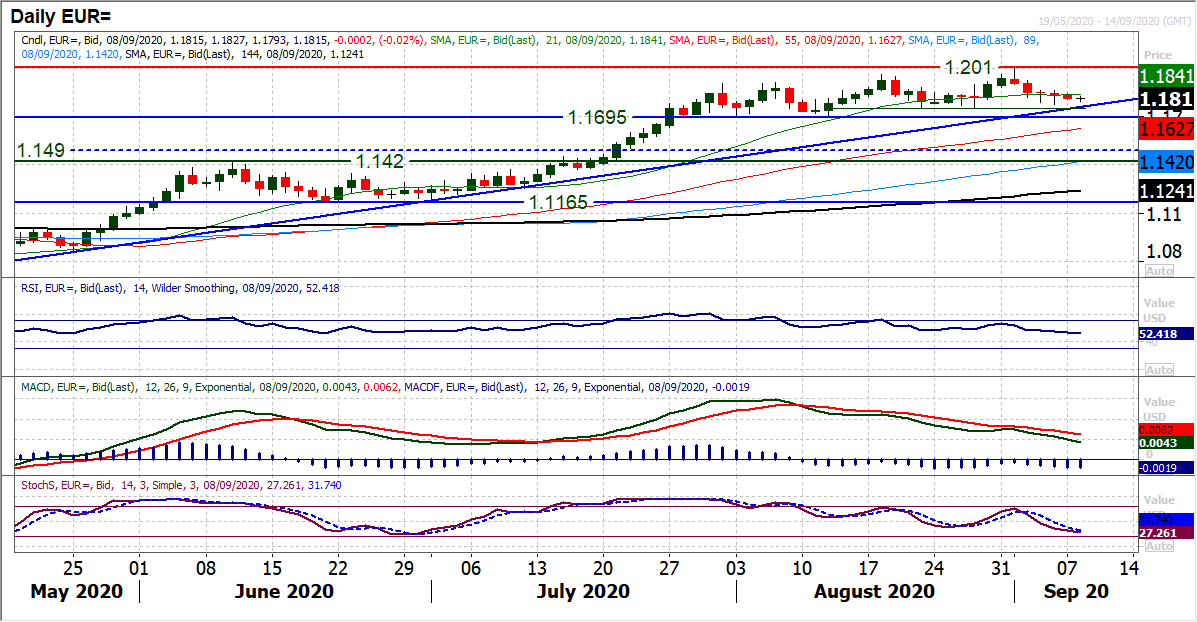 Sterling is under growing pressure as crunch time approaches in Brexit trade talks. A decisive negative candlestick yesterday (when other major pairs were very neutral still) suggests selling pressure is mounting on GBP. The bullish technical case is also now being broken, as support of a ten week uptrend has been broken. Momentum indicators crossing lower again keeps a corrective near term outlook in place. The unwind on Cable is pulling lower and the breakout support band 1.3185/1.3265 has now been breached. It means that the next important support area of 1.2980/1.3000 is gradually coming into view. A trend of lower highs and lower lows is showing on the hourly chart, with old support of 1.3185 now becoming a basis of initial resistance too. If the negative momentum continues to drag on Cable below 1.2980 this would be a key medium term breakdown. The bulls need to overcome 1.3265 again to recapture their control. 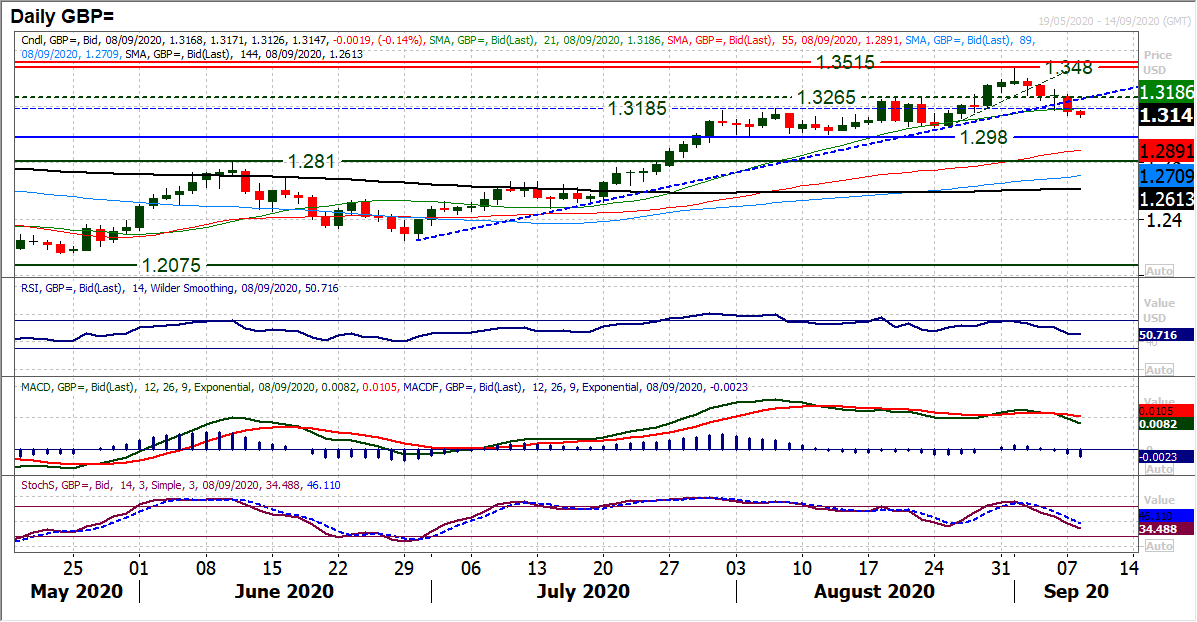 Another small bodied candlestick extends the near term uncertainty. Perhaps it is unwise to read too much into yesterday’s session, given the US public holiday, however, there are still question marks over how far this USD rebound can take Dollar/Yen. Our assessment continues to be that near term rallies will struggle in the 106/107 band of overhead supply. Another session also where the bulls have shied away from the two month downtrend (today at 106.45) and the 55 day moving average (today also at 106.45) which has become a basis of resistance in the past eight weeks. We continue to prefer pressure towards the 106.00 (which has been a near term pivot) and below towards the August lows of 105.10 in due course. A close above 107.00 would improve the outlook for the bulls and begin to look more seriously at a sustainable recovery. The hourly chart shows resistance at 106.50/106.55 strengthening. 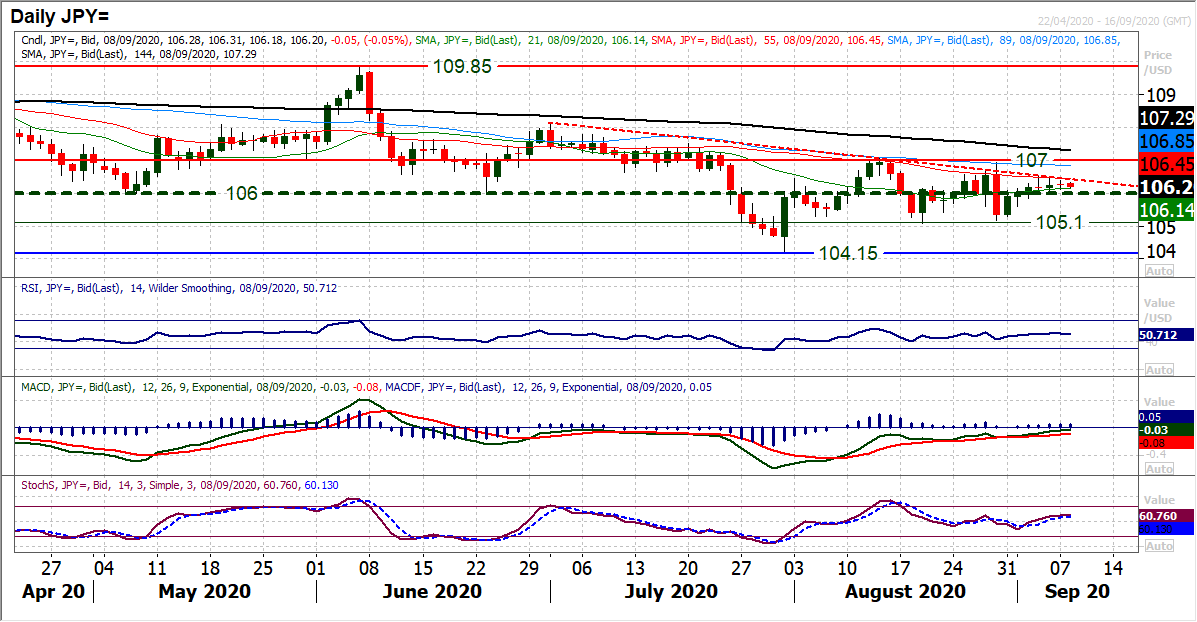 A near term negative drift on gold has turned into a sideways consolidation. However, the move is now breaking the support of a three month uptrend and the bullish medium term outlook is losing some of its conviction. It is notable, that the market continues to trade around the 23.6% Fibonacci retracement (of the big $1451/$2072 rally) at $1926 and continues to close above the level despite intraday breaches. This truly looks to be a market at an inflection point. Daily momentum indicators have unwound to consolidate back around strong buying opportunity levels. However, what could tip the balance for the next move. Closing below $1926 would be a negative warning, whilst below $1902 would be a key break. Our preference has long been to buy into weakness and nothing has changed in that regard, even if our conviction has wobbled slightly with the trend break. Resistance between $1940/$1955 is preventing a bull move now. 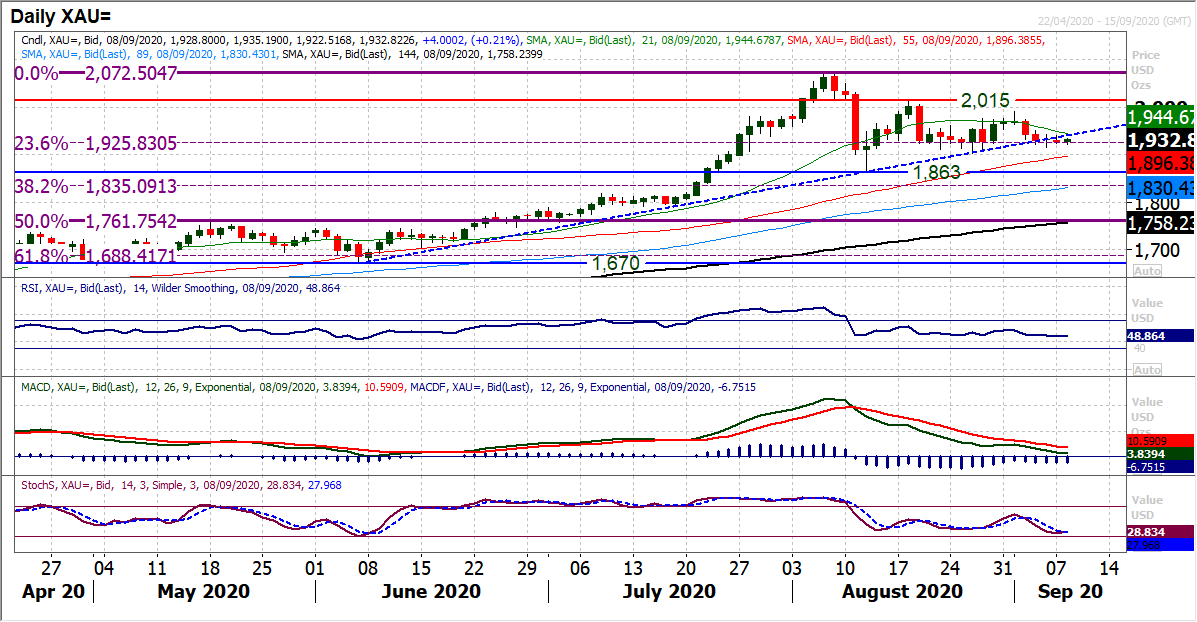 Another negative session and the outlook for oil remains under growing near term corrective pressure. There have now been four decisive negative sessions in a row now, with momentum indicators taking an increasingly sharp deterioration. The move is setting up for a test of $41.30 which has been a key support in recent months. Although there was an intraday rebound off $41.50 yesterday, the negative pressure remains today. The key to the outlook is also how the market responds to intraday rallies now. There have been nine negative candlesticks in a row, where the session close has been below the open. This suggests the bulls are weak and hold very little conviction, even on days where the market has traded higher. So we concentrate on the old resistance of the old support at $43.60/$44.55 which is now overhead supply. Failure under here on a near term bounce would suggest further pressure back on $41.30. Below $41.30 opens $37.00. 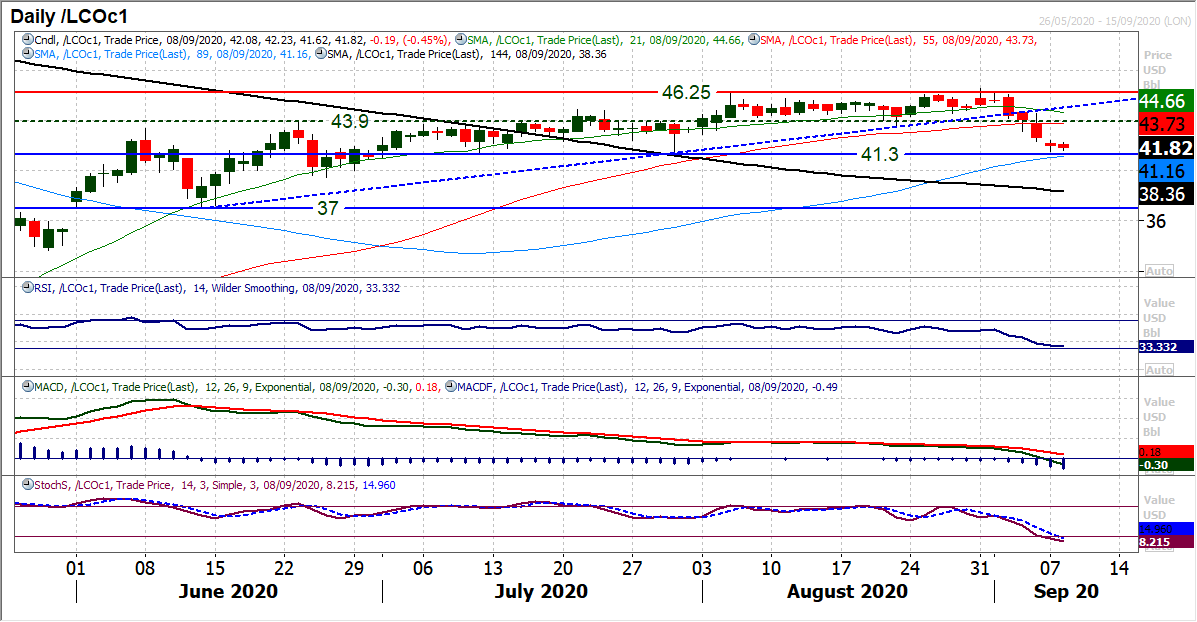 The sharp correction of the US tech sector has significantly rocked the confidence of Wall Street bulls. Volatility has spiked higher and a second session of selling pressure hit the Dow on Friday. Despite this though, the market closed well off session lows and some important technical support levels held firm. The confluence of the big medium term support at 27,580 and the five month uptrend remains intact. Also the market closed back above the 28,000 support. After being closed for Labor Day public holiday yesterday, futures are ticking higher once more today and a degree of support seems to be forming. It is important that this set up for an early rebound is not just seen as another chance to sell. Holding these support levels will be key as for now, this move is just another near term retracement within the medium to longer term bull market. Breaching 27,580 would be a real blow to this. Initial resistance for the bulls to overcome on renewed buying pressure is at 28,540/28,735. If this can be breached it would suggest the selling phase has played out and the bulls can eye the 29,200 high again. We remain buyers into supported weakness but the outlook could quickly change if 27,525 is broken. 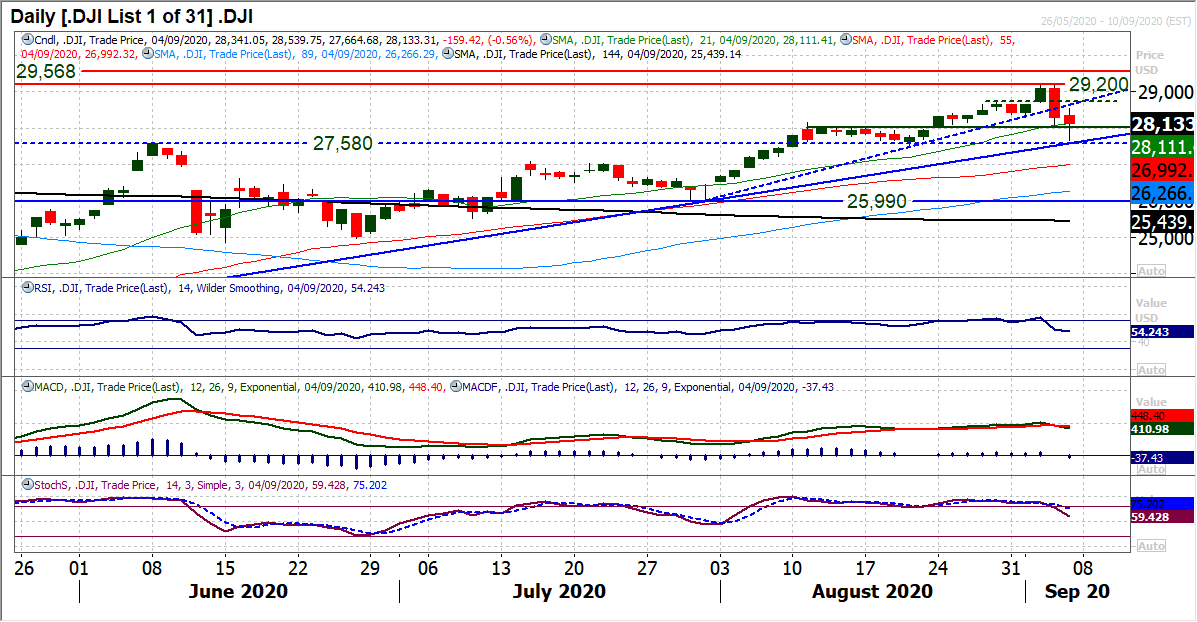