After a stunning end to the trading week on Friday, traders could be forgiven for taking a pause for breath this morning. The risk rally got a massive boost from the ECB on Thursday, but it was the US jobs report that blew everyone’s socks off. After what was surely the biggest data surprise in history, there are so many questions now being posed. Wil the US bounce back in a V-shaped recovery? Longer dated yields have spiked higher (with a yield curve bear steepener). It is early days, but it could now begin to support the dollar. The risk recovery has gone so far in a very short space of time (at least in the past two weeks, it could be time for at least a near term pause. There is an FOMC meeting on Wednesday with new economic projections. This payrolls report may induce a significantly different set of projections and potentially statement than previously expected. How will this play into expectations of monetary policy stimulus? It could depend upon how much the Fed trusts this data which was such a massive surprise. In the meantime, traders may just begin to view this rally with caution. Equity futures for the US are steady this morning, but slightly lower on European markets. The dollar has not yet managed to sustain its gains from Friday, and is weakening again slightly. Oil is up once more after OPEC+ agreed to extend its production cuts through for another month. 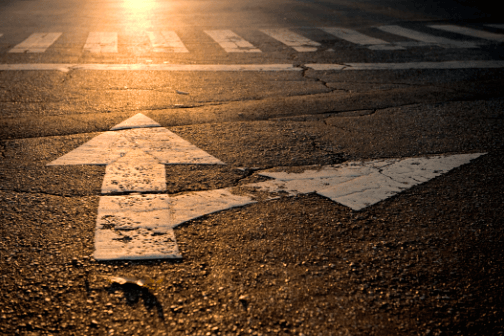 Wall Street closed strongly into the close on Friday, with the S&P 500 +2.6% higher, whilst E-mini S&P futures are just +0.1% higher in consolidation. Asian markets played catch upon Friday’s rally, with the Nikkei +1.4% higher and Shanghai Composite +0.3%. European futures are pointing lower though, with FTSE futures -0.7% and DAX futures -0.8%. In forex, the dollar gains from Friday have not continued today although mostly this is in consolidation with only a shade of USD underperformance across major pairs. In commodities, gold has rebounded +0.5% after its latest decline, whilst silver is +1.4% higher. Oil is around +0.5% higher but has pared earlier gains.

It is a light day on the economic calendar today. Only really the Eurozone Sentix Investor Confidence at 0930BST to be of interest. Expectations are for an improvement in June to -22 (from -41.8 in May) which would be almost back to October 2019 levels (which was -16.8).

Also be on the lookout for ECB President Christine Lagarde who is speaking at 1445BST.

When markets move so far so quickly, it is important not to lose those gains on long position. So it can be wise to tighten stops (or profit triggers) and with AUD/USD approaching a key resistance, it comes into this category. For the Aussie which has had a mammoth run higher in recent weeks, this recovery is incredibly now within touching distance of a full retracement of the massive sell-off which began from the January peak of $0.7030. It has been a remarkable acceleration in the past couple of weeks but there are signs that the momentum is slowing. Positive momentum configuration has pulled the 14 day RSI into the high 70s (levels not seen since January 2018), whilst MACD lines have accelerated to levels not seen since March 2016. So with the market so stretched and such an important resistance overhead, there may be some doubts creeping in that the market can go much higher. So it is wise to look for potential profit-taking signals. The hourly chart is beginning to threaten some negative divergences on hourly RSI and MACD. If the hourly RSI drops below 40 and MACD lines drop below neutral, then this would be a big warning of profit taking and potential correction. Initial support is at Friday’s low of $0.6930 and a higher daily low has not been breached ten consecutive sessions. Below  $0.6880, Wednesday’s higher low of $0.6855 which would be the confirmation of a corrective move building. Initial resistance is Friday’s rebound high of $0.7010 under the crucial $0.7030. 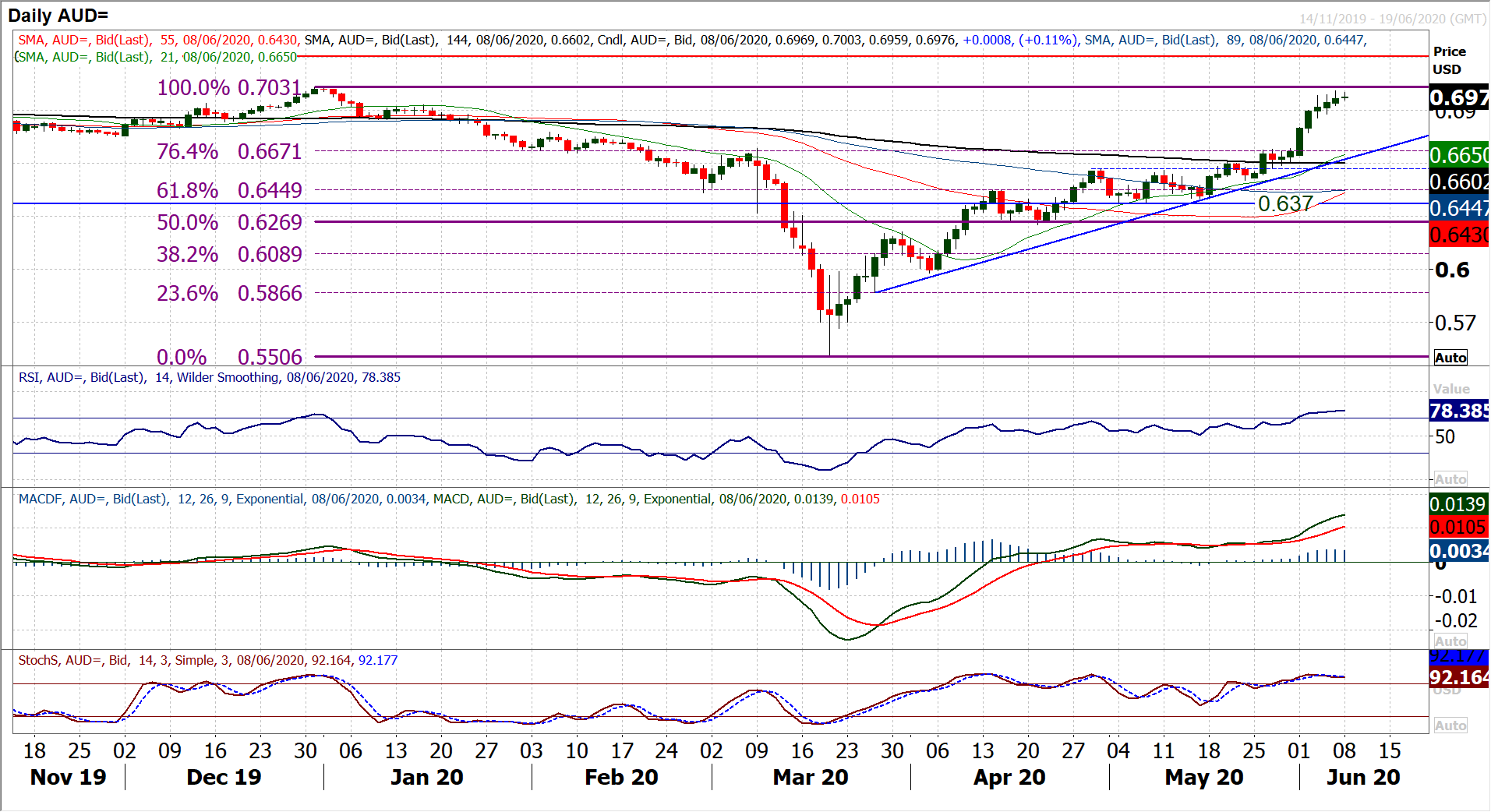 In the wake of the huge upside surprise of Nonfarm Payrolls on Friday we have seen the US dollar beginning to show signs of life again. This has come with EUR/USD at a massively overstretched position to the upside. Is a correction about to set in? After Friday’s bull rejection at $1.1385 formed a big negative candlestick, support of the sharp two week uptrend comes in today at $1.1285 and is being tested. Momentum is threatening to roll over too. The RSI is beginning to pull lower (from a stretched 77) to threaten a basis corrective signal (a cross back below 70) whilst Stochastics are also crossing lower. Friday’s close lower was also the first closing price back below the Bollinger Bands in seven sessions and is also a signal of exhaustion on the bull run. The hourly chart shows that the rising 55 hour moving average (currently $1.1295) has been an excellent gauge for the bull run support and is now being broken. Hourly momentum is also on the brink of corrective signals too. Hourly MACD lines are already now back under neutral for the first time since 25th May (when the bulls move really started. Hourly RSI falling back below 40 would also be a key signal of reversal in the trend higher too. Below $1.1245/55 support would be a trigger with a deeper correction setting in below $1.1180. 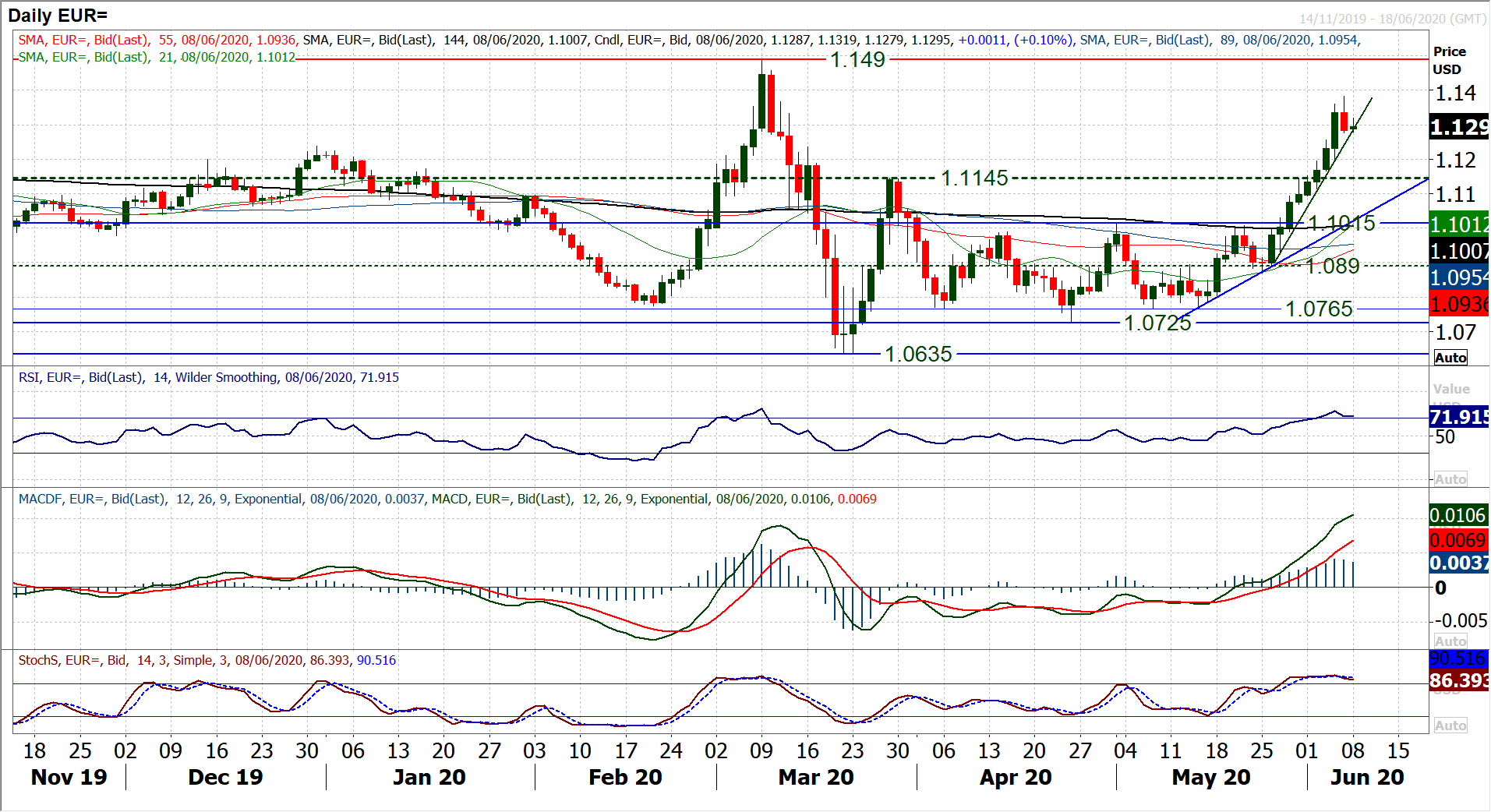 Cable broke through the key resistance of the April highs at $1.2645 on Friday. The candle was a little uncertain, but (closing over -50 pips below session highs of $1.2730) but the move has regained some upside momentum this morning, adding over +40 pips in early moves. The key for Cable will now be how the market reacts to the breakout at $1.2645. Cable has been positive on a closing basis in nine of the past ten sessions, and how the bulls respond to profit-taking could now define whether the bulls can trust the breakout. Back in mid-May there was a similar downside break of key support only for the market to instantly see it as a false break. For the bulls to prevent a similar swing (this time back lower), there needs to be support now building above the $1.2645 breakout. Hourly chart signals are still fairly strong but are just beginning to sag slightly. There is a support band $1.2610/$1.2645 below which the bulls begin to lose control. Below $1.2500 becomes a deeper correction. 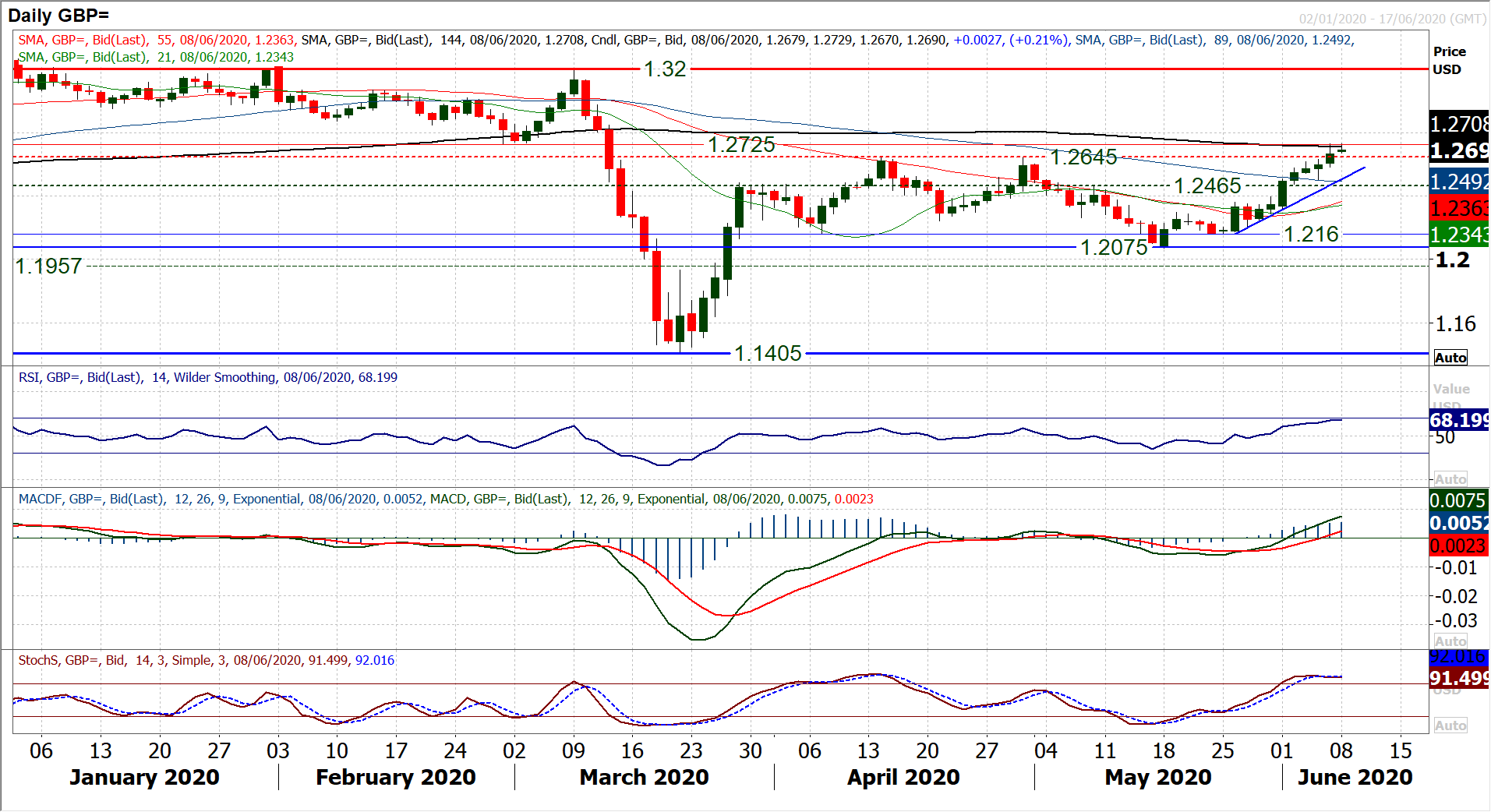 The improvement in Dollar/Yen has been progressing well in the past week but is just beginning to show some signs of fatigue this morning. In the wake of a risk positive and dollar positive payrolls report, the price soared through the resistance at 109.35 which has opened the way for the implied target of 110.00 (from the seven week base pattern) to be met. Daily momentum indicators have been strong and the RSI is just threatening to peak around the 70 mark this morning. For now, this could simply be a near term reaction and near term weakness would still be seen as a chance to buy. MACD lines are accelerating higher above neutral and suggest the medium term outlook is building positively now. Reaction around previous breakout levels will be an interesting gauge, with 109.20/109.40 initial support now on the hourly chart, coinciding with the old April high of 109.35. The next resistance above Friday’s high of 109.85 is the March high of 111.70. 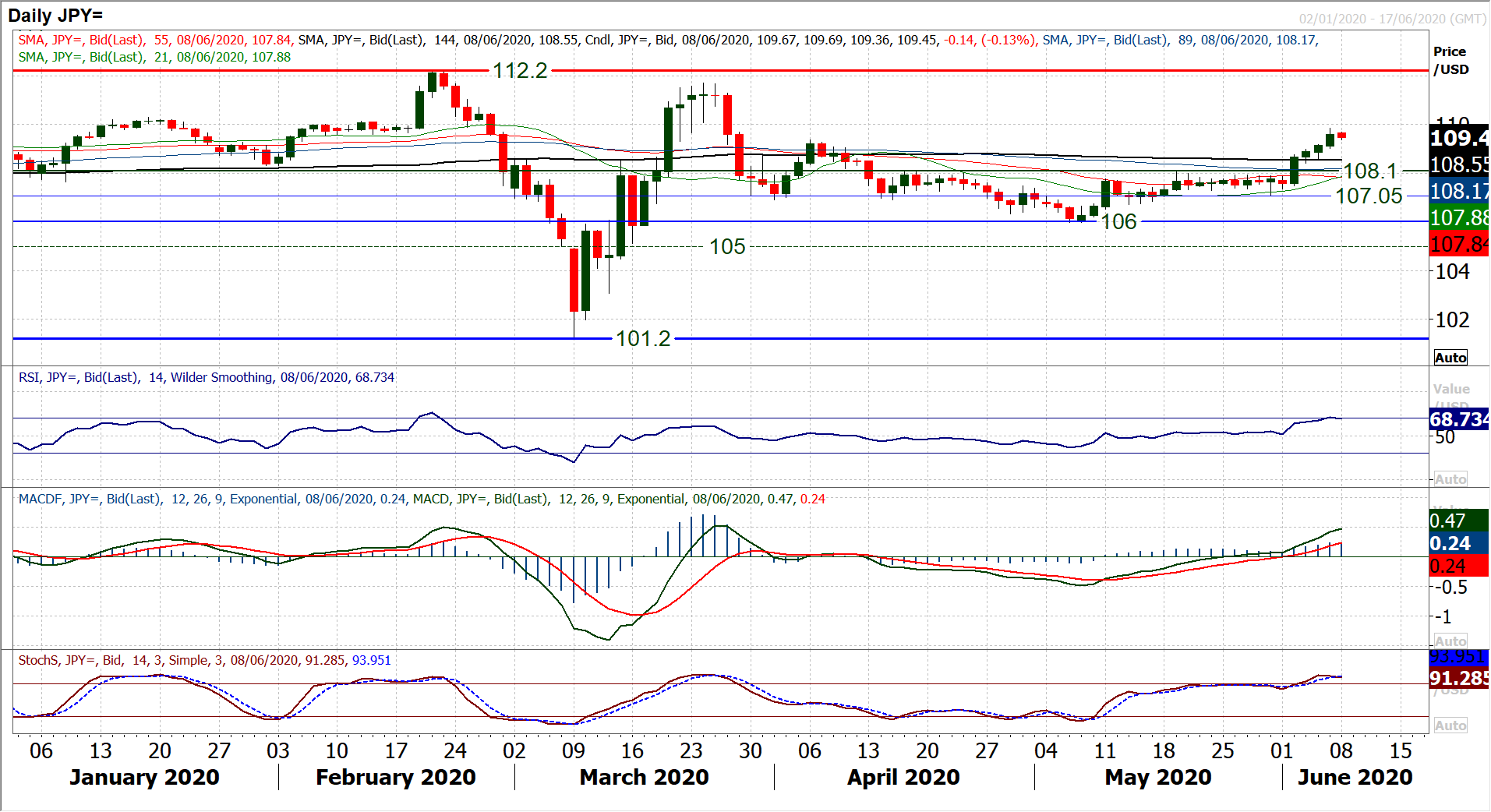 The surge of positive market sentiment in the past week has really weighed on the outlook for gold. We turned neutral on gold on a medium term basis last week and Friday’s latest strong negative candle reflects this now. The positive configuration of technical signals on price and momentum has gone. We see gold as a range play now, with the support of the April lows between $1660/$1668 providing the key floor for the range. On the upside, it is becoming clear now that the bulls are restricted between $1746/$1764. Momentum is also in a far more of a ranging outlook, with RSI into the 40s and MACD lines unwinding to neutral. The near term outlook has become one of selling rallies, so the next important move will be how the bulls can react as the market rebounds today into what is essentially now resistance between $1690/$1700.  The bulls need to pull above $1720/$1725 resistance at least to regain any serious sense of control. We would view this as unlikely unless there is a significant deterioration in broader market sentiment once more. Friday’s low at $1670 adds to the basis of support around the range lows now, but the bulls will have to work hard for this to now be retested again in due course. 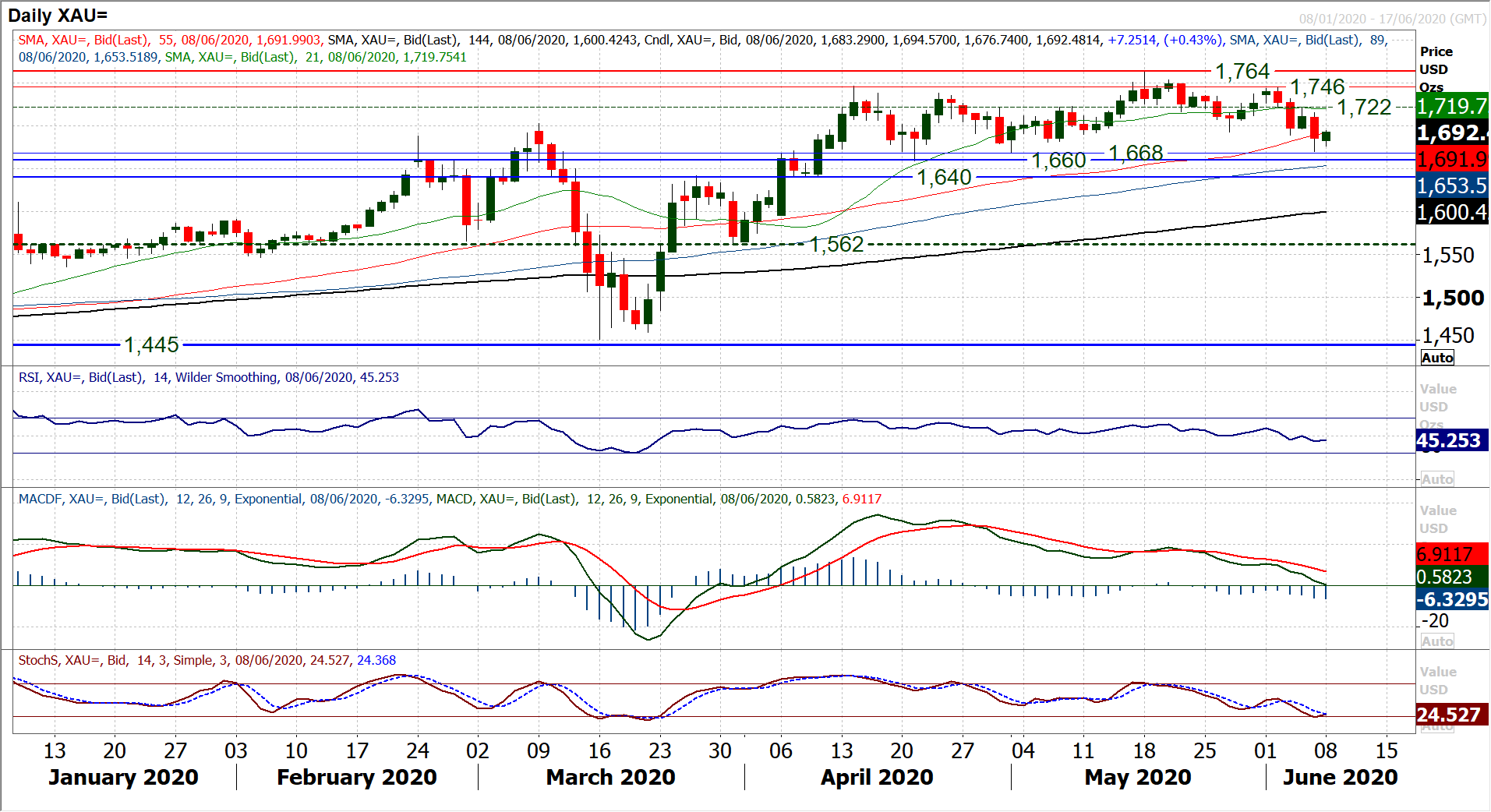 The rally took its latest leg higher on Friday with another big positive session which added over +5% to Brent Crude. It also does not seem as though the bulls have stopped either, with a further move higher in early moves today. The bulls certainly seem intent on moving to fill the big gap from March at $45.20. Momentum is impressively strong with RSI climbing in the mid-70s, whilst MACD lines are rising impressively to levels not seen since 2012 and Stochastics strong. We continue to back this trend higher, and with nine positive closes in the past ten sessions, we see even intraday weakness as a chance to buy. The course of this rally has tended to be that consolidation follows in the wake of what is often a one to two week bull move. Perhaps with momentum so extended, we can expect another consolidation soon. The uptrend is way back around 38.00 this morning and has some way to catch up. In the meantime though the bulls are intent on filling the big gap. Initial support at today’s low of $41.80. 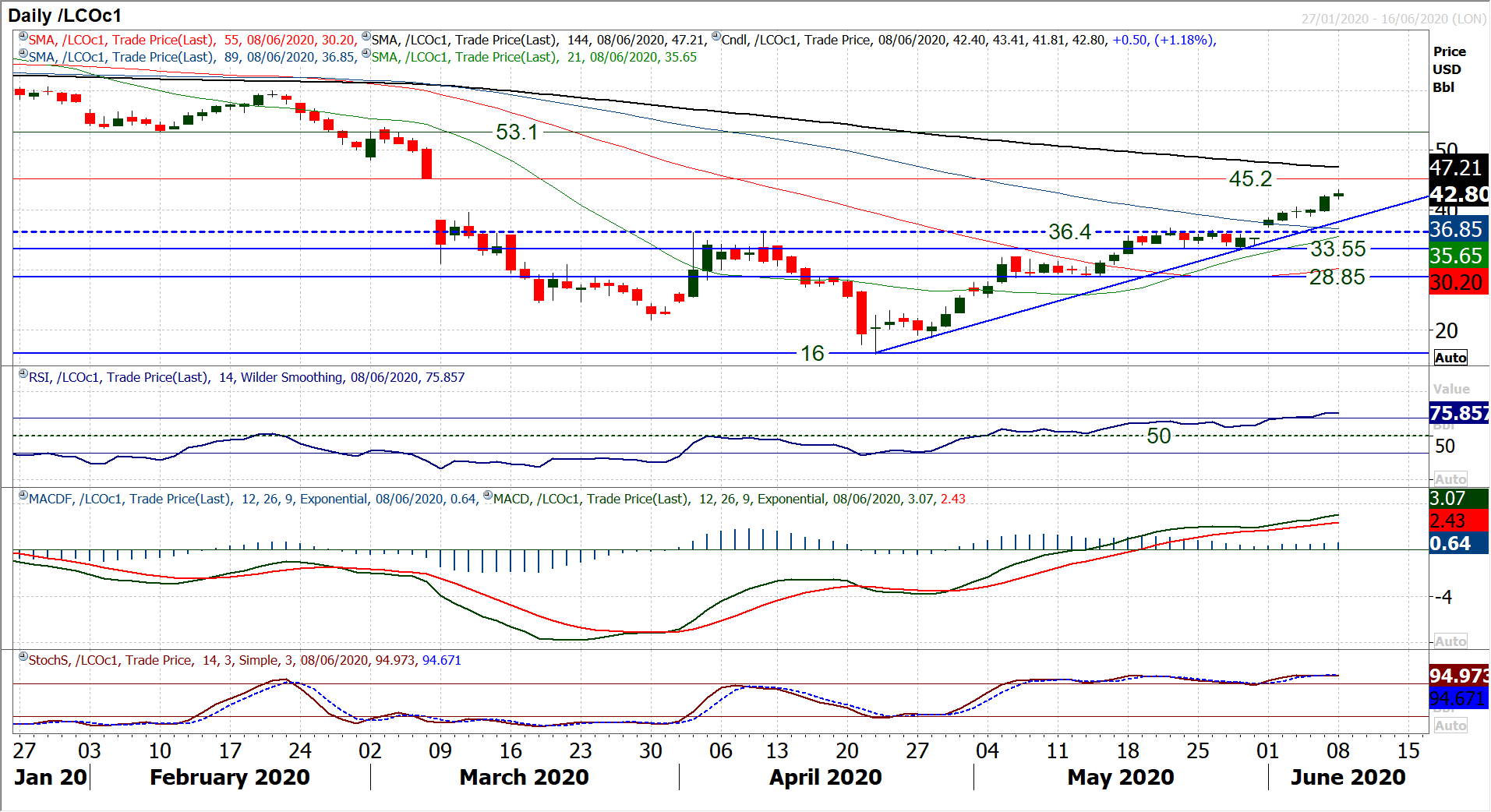 The bull run continues to surge. Another huge upside surge on Friday with +3.1% in the wake of what is surely the largest positive surprise in the history of economic data. The Dow gapped higher at the open, for a third time in four sessions (none of which are yet to be filled) and closed above the resistance of the early March rebound at 27,100. Momentum is hugely strong now, with the RSI rising into the mid-70s, whilst MACD and Stochastics are bullishly configured. Conventional sanity would suggest that the market cannot go on running higher like this. Friday’s session was almost entirely outside the upper Bollinger Band, so this is becoming extreme. However, for now the run just shows no sign of stopping. Futures are again pointing higher (albeit only slightly today).Friday’s low at 28,836 is initial support and the gap is open at 26,384. Uptrend support sits around 26,300 today. 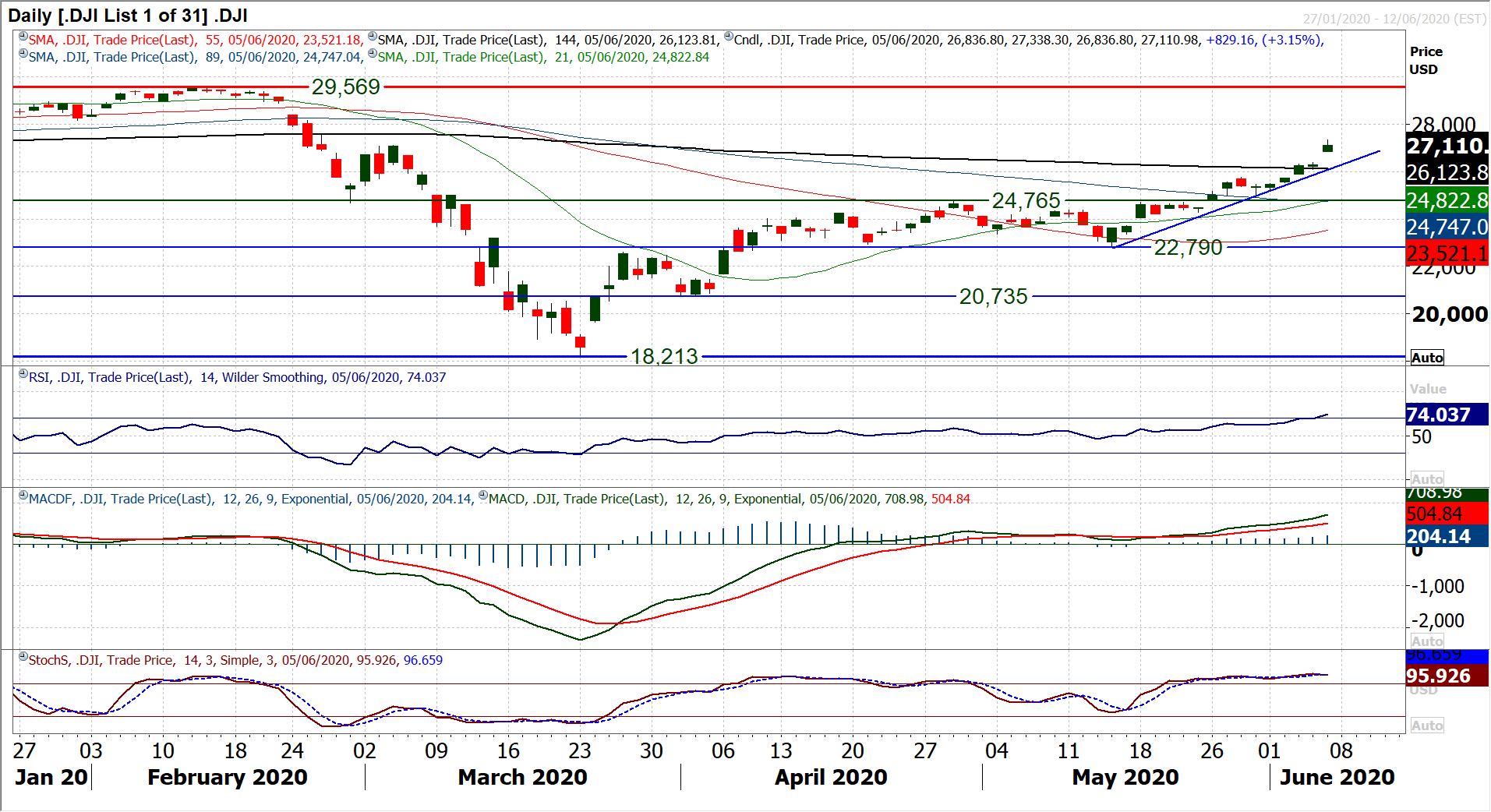 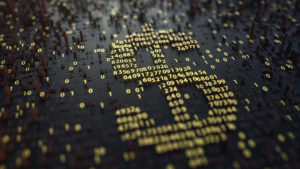