If ever there was a lesson in watching the newsflow as well as the technicals it was yesterday. The dollar weakening and positive risk appetite was turned completely on a sixpence with Trump’s announcement to end negotiations on fiscal support. Trump has pulled the plug on the White House negotiating with the Democrats, saying that Nancy Pelosi is “not negotiating in good faith”. He has ordered negotiations to stop until after the Presidential election. This coming even after Fed chair Powell spoke of the need for fiscal support to be used alongside monetary policy. Risk appetite flooded away and the dollar strengthened. Now, it is all about the reaction today. We will see what the recent risk recovery was really made of. Was it all a load of hot air, just pumped up on the assumption that a fiscal support package of possibly towards $2 trillion would flood the economy? Or is there something deeper to the move? An initial dollar strengthening on the disappointment has started to ebb again early this morning. Risk appetite is rebounding, with Treasury yields higher, the dollar broadly lower, US index futures higher and gold higher. Can this move continue into and through the US session. If US traders come in and see another opportunity to sell, it would signal a confirmation that there is likely to be at best choppy trading (likely in front of the election), but could even see another leg of dollar strengthening. It could be a key session ahead. 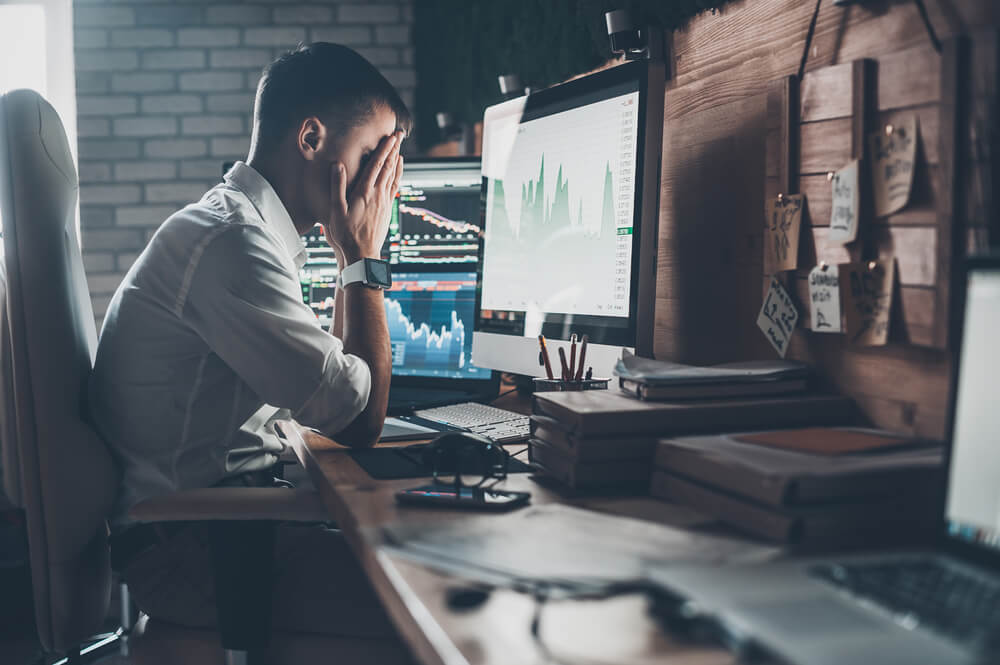 Wall Street gave up earlier session gains to close with a sharp turn lower into the close. The S&P 500 ended -1.3% lower at 3361, but futures have rebounded slightly today with the E-mini S&Ps +0.4%. This has left a mixed session in Asia, with the Nikkei -0.1% and Shanghai Composite -0.2%. In Europe, there is an uncertain look, although a degree of support for FTSE futures currently +0.1%, with DAX futures -0.2%. In forex, there is a mild move back out of USD as risk rebounds early today, with AUD and GBP performing well, whilst JPY is the main underperformer. In commodities, we see a bounce back higher on gold (+$13, or +0.5%), whilst silver is also higher (+2.2%). Oil has opened lower by around -1% after big recovery gains in recent sessions.

Today is quite light on key entries for the economic calendar. It is only really the EIA Crude Oil Inventories at 1530BST of interest, with an expectation of a slight stock build of +0.4m barrels (after a drawdown of -2.0m barrels last week).

It is however, a day heavy with central bank speakers. The ECB’s Christine ,Lagarde takes top billing at 1310BST where the hope is that perhaps she will give more away that yesterday’s speech. Then later in the session, the Fed speakers begin, with the FOMC’s Neel Kashkari (voter, very dovish) at 1800BST. The at 1900BST the FOMC’s John Williams (voter, centrist) speaks.

The recovery outlook for the dollar has certainly under pressure across major pairs, however, has there been another change in outlook? With USD/CAD the market has been dragged back to test a five week uptrend. Whilst intraday tests have been seen in recent sessions, a pick up and positive candle into the close last night has firmed the support. More importantly, the breakout support around 1.3240/1.3260 has also held firm. The recovery outlook has been on the brink of breaking down, but the bulls have responded well. They will now look to build a position back above 1.3310 which is the basis of an old long term pivot, with a decisive close above re-opening 1.3420 again. Momentum indicators are still at a crossroads though. The RSI needs to hold above 50 (a basis where support has formed recently), with Stochastics also hovering around their neutral point, whilst MACD lines have converged. It could all hinge on the reaction today, where a second bull candle above 1.3310 would suggest strengthening buying pressure again. The bulls will be looking to get back above 1.3330/1.3340 initial resistance to regain some sort of positive outlook again.  The importance of 1.3240 support is ever growing now. 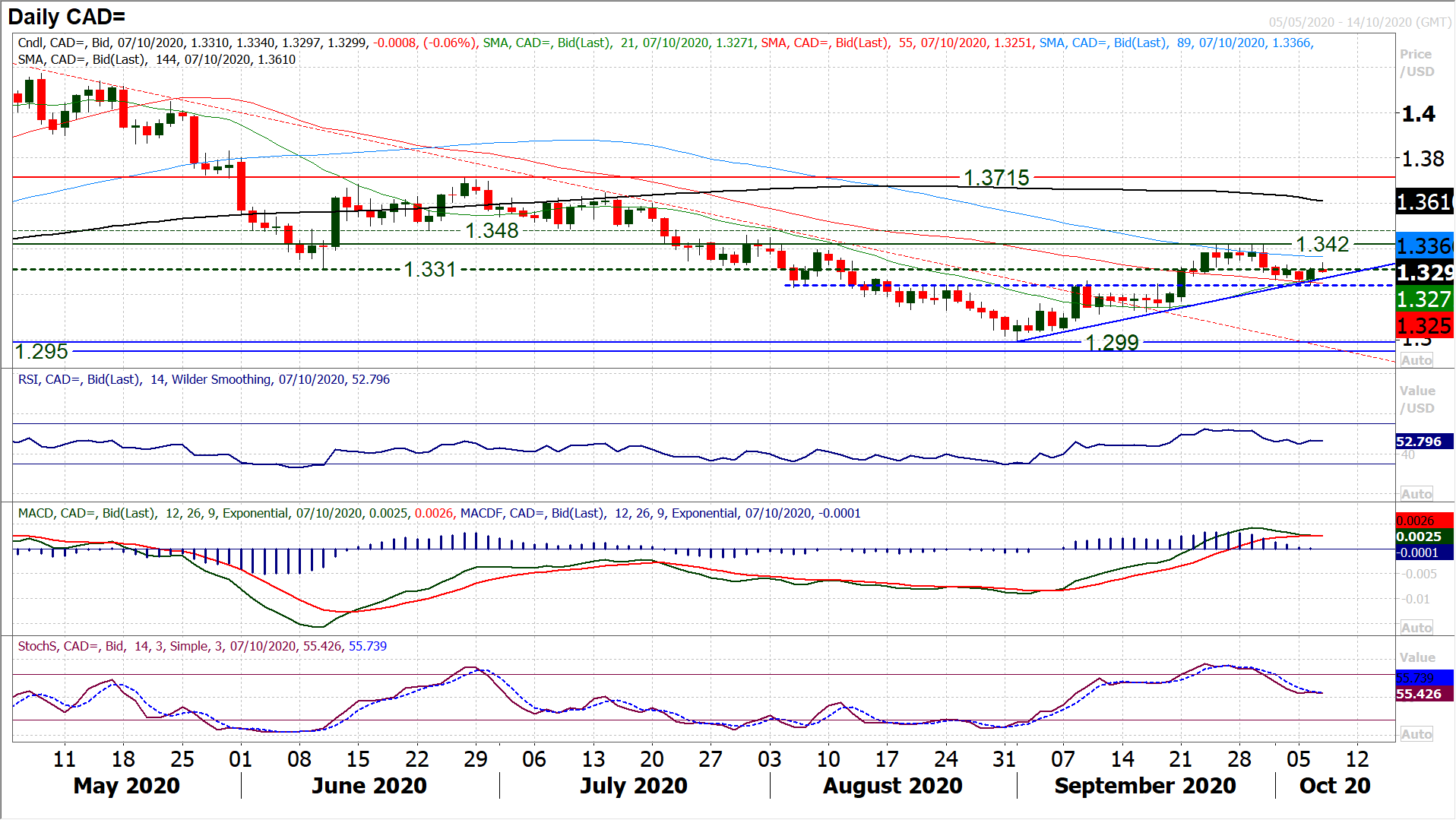 It is an intriguing battle for control right now. Clearly there is a newsflow impact on trading, as Trump’s decision to pull the plug on fiscal support negotiations has turned right appetite sour and strengthened the dollar. How this now develops in the coming days will be key. EUR/USD looked to be developing a positive outlook as the market moves above 1.1750 and broke the five week downtrend. The intraday decline now drags the market back into 1.1695/1.1750 key pivot area and this is a key area to see what the outlook really is. Closing below 1.1695 would now reflect a growing and renewed dollar strengthening, whilst closing decisively back above 1.1750 would be a strong response to suggest that the market is turning against the dollar. Resistance is at 1.1805 now from yesterday’s high. 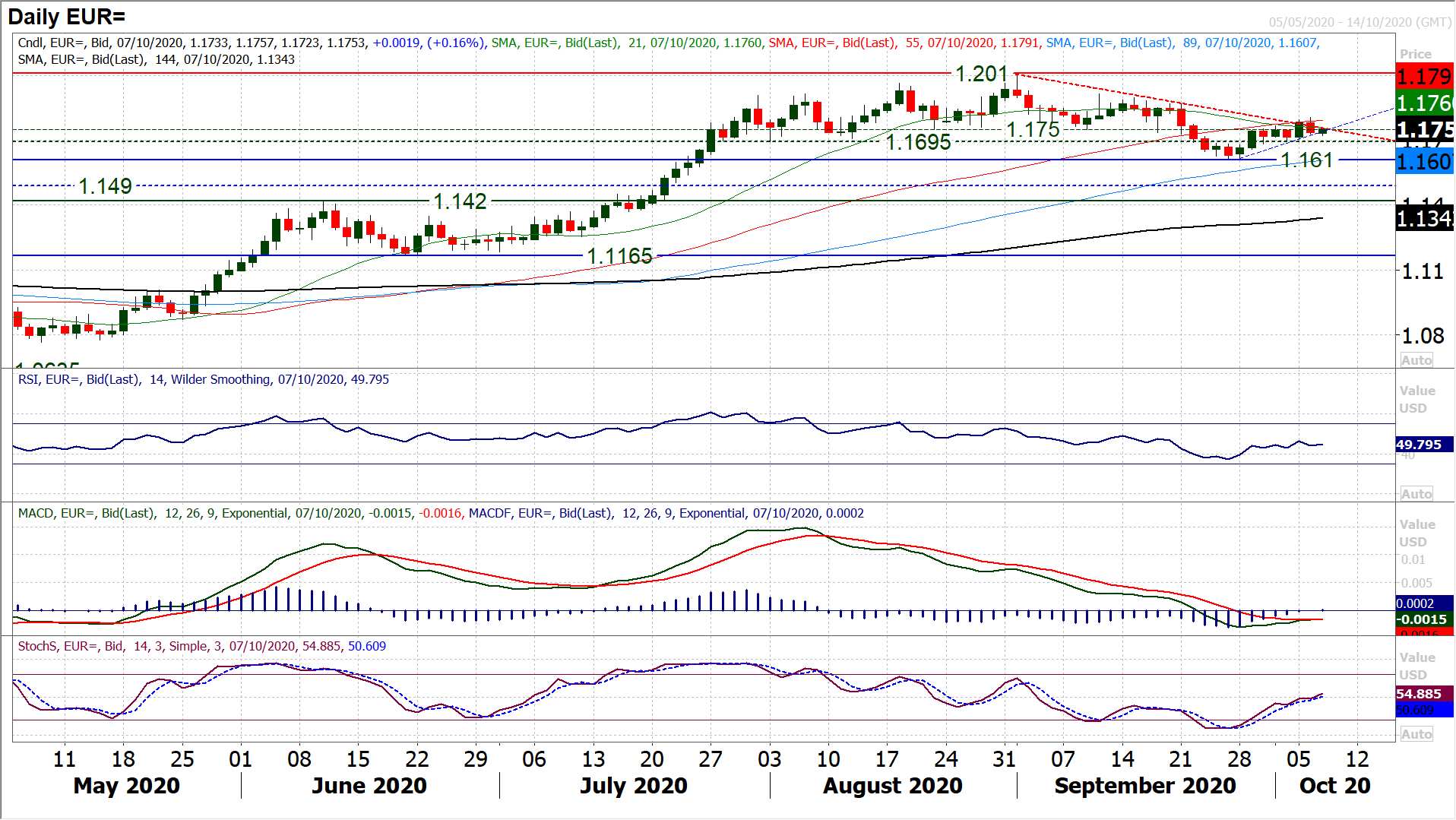 A sharp intraday turn lower has shifted the emphasis within the 1.2670/1.3000 range once more. A bearish engulfing candlestick has put a halt to upside pressure and bolstered the resistance at 1.3000 again. Breaking the 8 session uptrend reflects this. How the market responds today will be telling as to whether the market regains downside momentum for a move back towards 1.2670 again. A second negative candlestick leaving a move below 1.2860 (still a gauge for a mid-range pivot) would increase corrective momentum. Stochastics are already crossing lower (a sell signal), whilst RSI is back under 50. The hourly chart shows initial support between 1.2800/1.2835. 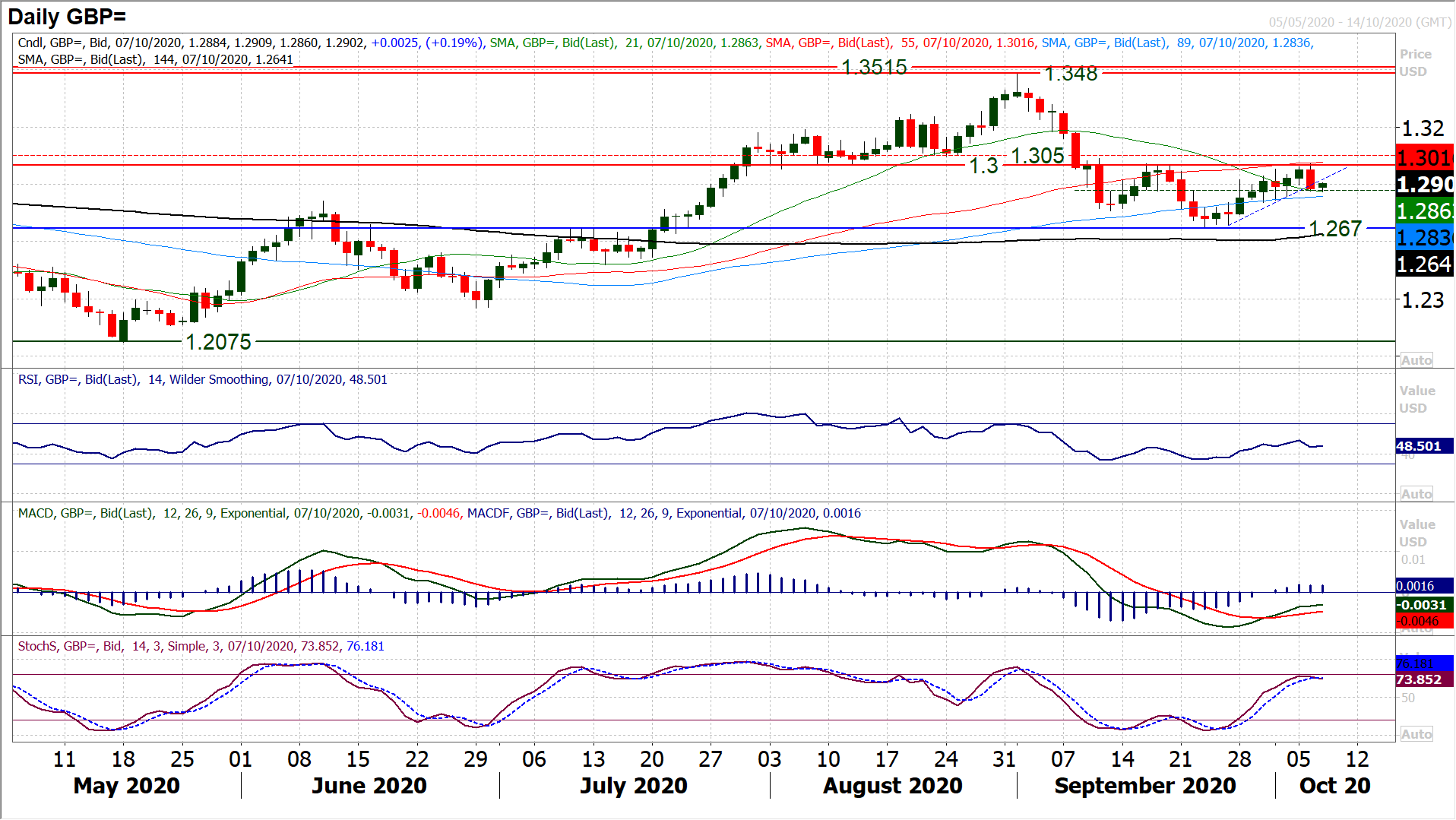 There is somewhat of an uncertain outlook for risk forming and this is leading to some mixed signals on Dollar/Yen. The yen has not benefitted from the news that Trump is ending negotiations on fiscal support, so perhaps it is not all out risk negative then. It leaves a mild strengthening on USD which is seeing USD/JPY still hovering around the resistance of 105.80. This is now seriously testing the resistance of the three month downtrend and the 55 day moving average (at 105.76 and which has been a great basis of resistance in recent months). It leaves Dollar/Yen on a knife edge. We believe that any move back above the old 106.00 pivot would be a key shift in outlook. It would end the trend of selling into strength, and leave the pair in a medium term range 104/107 (which it would have then been in for ten weeks). However, another bull failure here would maintain the struggle that the dollar bulls face and pressure back on 104.90/105.10. Momentum indicators point towards a recovery, but can the market break through 105.80 resistance? 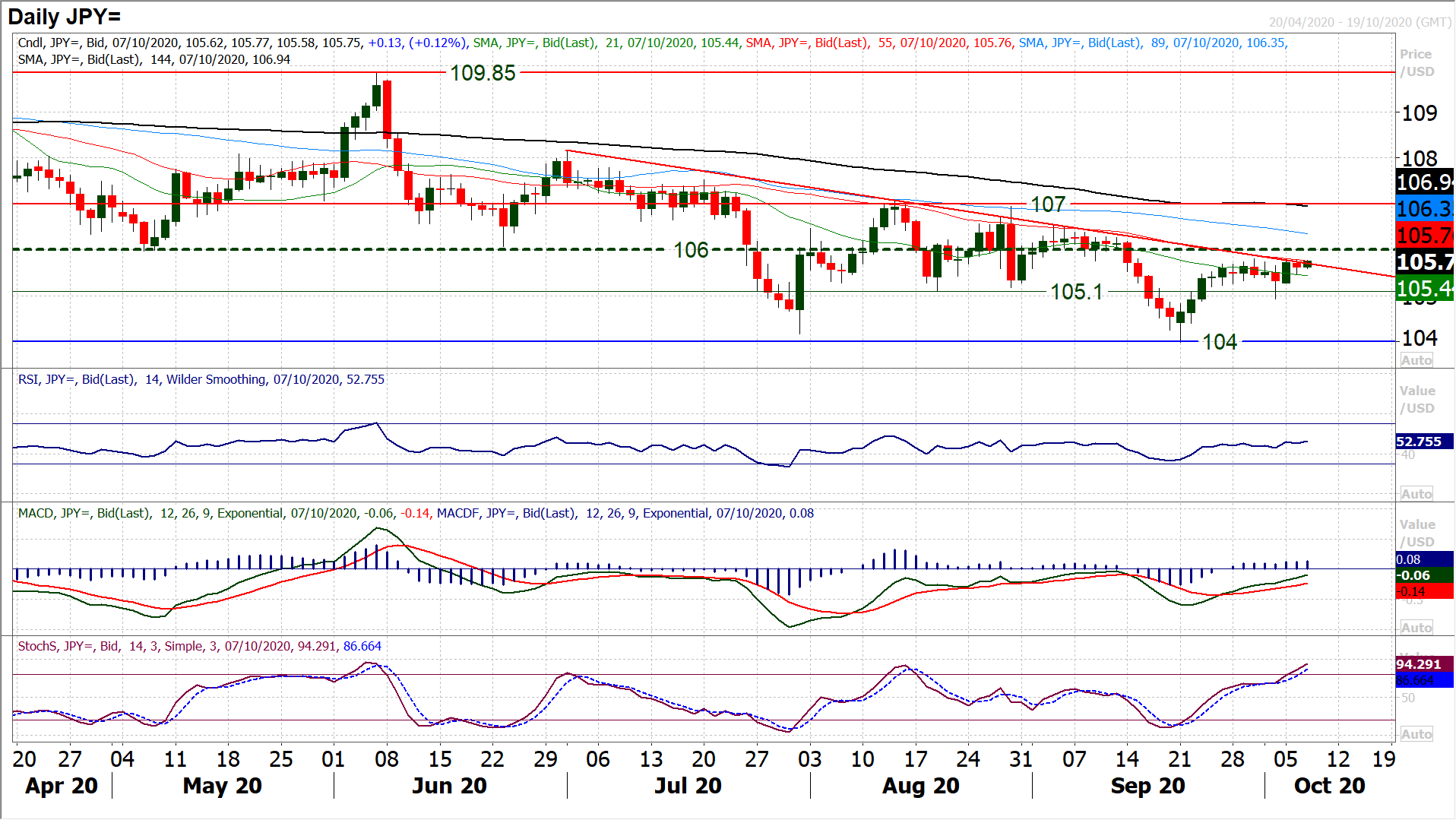 Gold responded decisively negatively to the news of Trump ending the fiscal support negotiations yesterday. A sharp move lower into the close has left a big bearish engulfing candlestick. The worry for the gold bulls is that this leaves resistance at $1921, in the midst of the old $1902/$1926 band of overhead supply. The market has ticked higher today, but another bull failure under the old $1902 resistance now would really begin to increase negative pressure. We have been questioning that momentum indicators could simply be unwinding before another leg back towards the $1848 support and this is now the risk. Stochastics rolling over under 50, along with the failure for MACD lines to bull cross are concerns. An early tick back higher this morning is a positive response, but this needs to be sustained into the US session. If the bulls are unable to sustain a rebound, then it would really question the strength of the recent gold rebound. However, if this move can be held and the market moves back above $1902, even in the knowledge that US fiscal support is highly unlikely now, then it would suggest a strength to risk appetite (hitting the dollar and supporting gold). Support now at $1873 today. 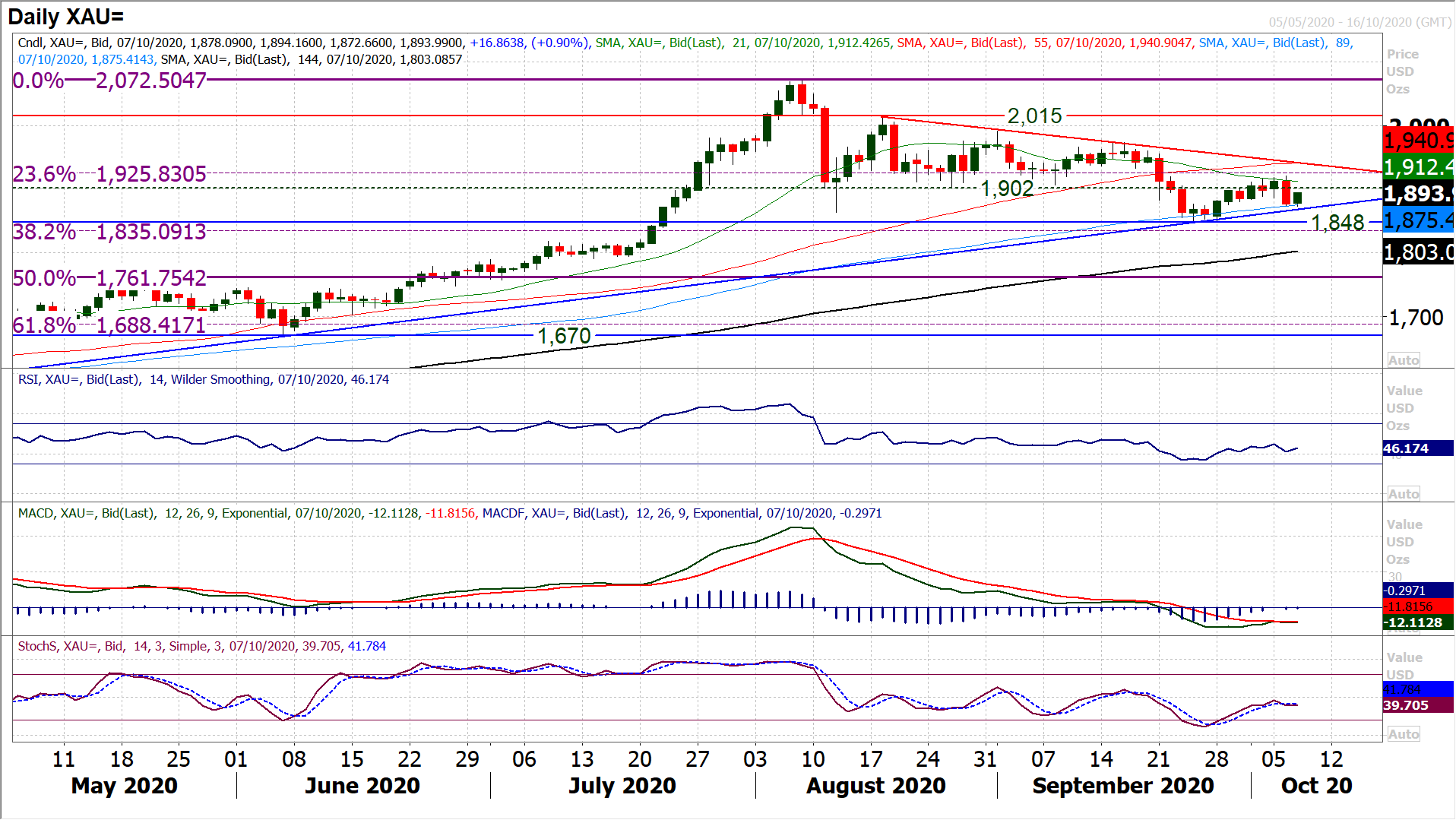 Technically, this is becoming a bit of a mess, but swinging sentiment can do that to a chart. A second decisively strong bull candle has broken a five week downtrend and seen the market close above resistance at $42.60. However, we will now see how set the bulls are today as response comes to the ending of US fiscal support negotiations. Initially oil has opened lower, but not yet plummeted back. We watch the old near term pivot at $41.30 to be a gauge now. Holding above $41.30 would help to sustain the improving outlook within the one month $5 trading band $38.80/$43.80. Initial resistance is at yesterday’s high of $42.85. 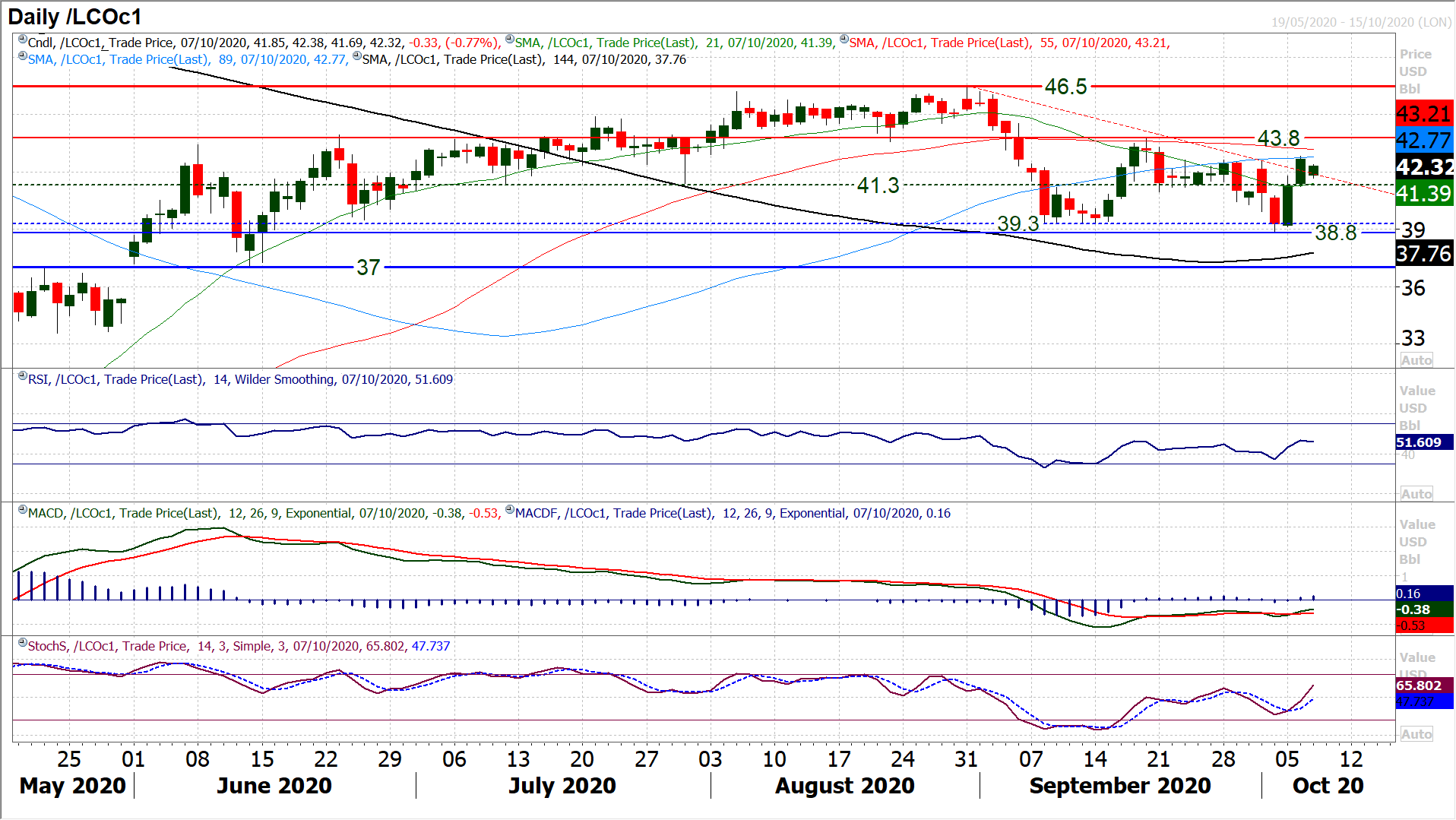 A huge intraday reversal lower on Trump’s decision to end negotiations on a fiscal package has completely shifted the outlook once more. A bull failure almost bang on the resistance at 28,365 (leaving a high of 28,355 yesterday) turned the market sharply lower into the close. This left a “bearish engulfing candle” and now turns focus back on how the market will respond to the pivot band support 27,340/27,580 again. Momentum rolling over again, we now see MACD lines faltering around neutral and Stochastics threatening to bear cross. The RSI falling under 50 would be added threat on the pivot band. How the market responds to the pivot will now determine the near term outlook within what is becoming a trading band 26,535/28,365. Without the prospect of fiscal stimulus for at least the next month, we will now see what the bulls are made of. 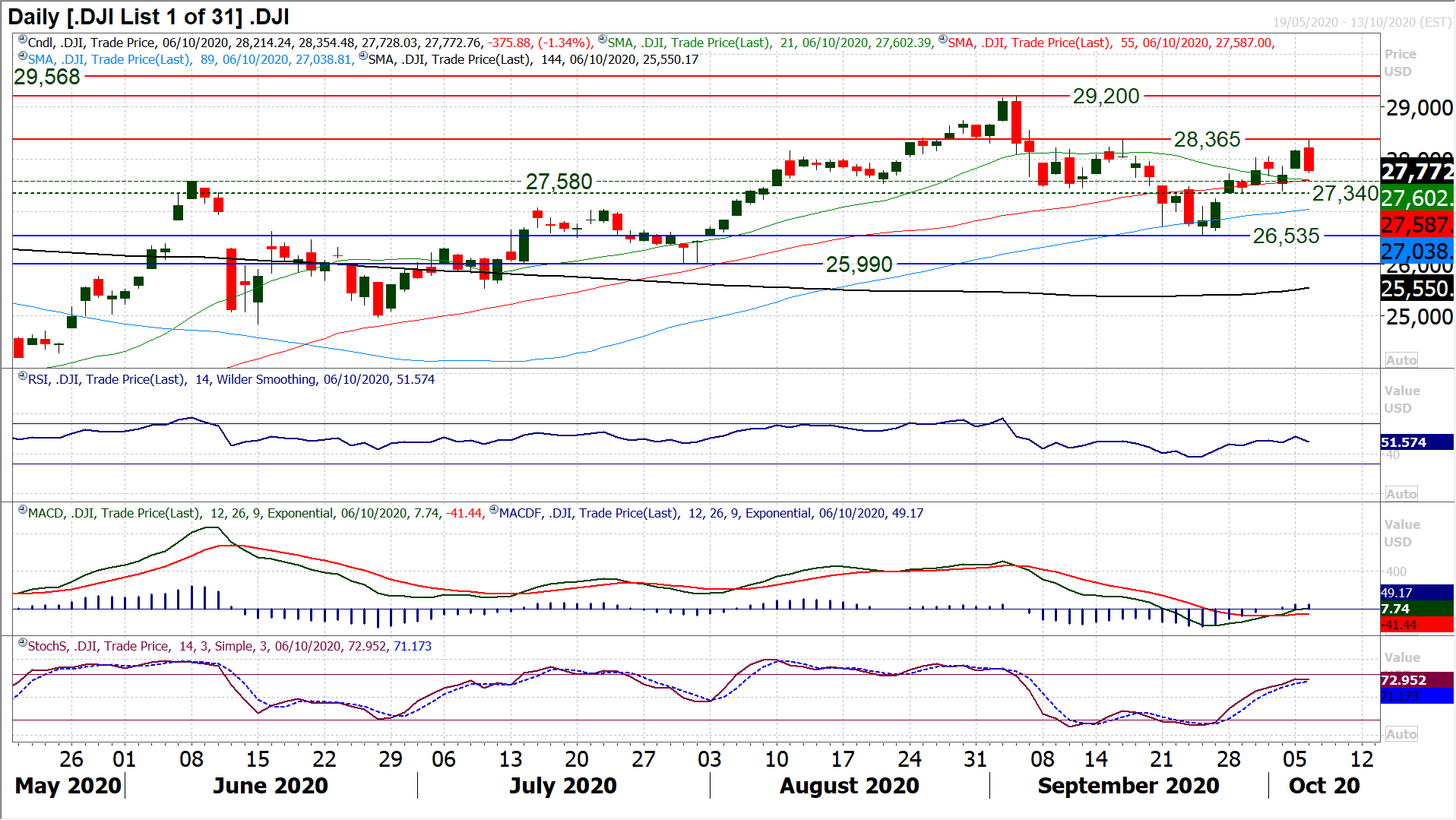