There has been a decisive shift in outlook across major markets in the last couple of days. The drivers have been a new phase of positive risk appetite, but also a significant breakdown on the dollar. Strongly encouraging newsflow on COVID-19 vaccination trials have allowed traders to pull forward expectations of when an effective vaccination could be usable. Furthermore, ever more fiscal support, coupled with a strengthening of EU foundations have arisen from the agreement on the EU Recovery Fund discussions. The net result has been a rout for the US dollar, with the US Dollar Index falling below support at 95.70. The vaccine progress is a positive for the global recovery, but the US economy is still struggling to contain infection rates and deaths from COVID-19. A negative impact on the US economic recovery in the coming months is being factored in. Elsewhere though, this dollar weakness is playing into breakouts on gold, silver, oil, equity markets and several major forex pairs (EUR/USD, AUD/USD, NZD/USD especially). There may be some near term kick back on these moves, but it looks to have been a decisive shift in outlook for the dollar and period of underperformance seems to be well set now. 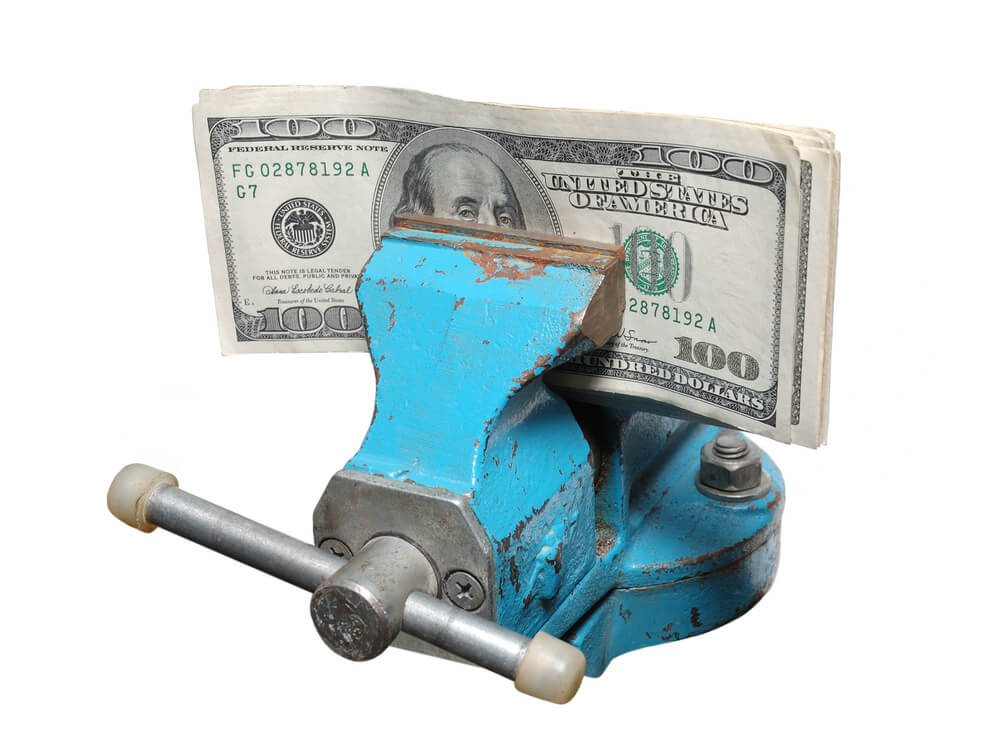 Wall Street closed only marginally higher in the end, with the S&P 500 +0.2% at 3257, whilst US futures are flat today, with the E-mini S&Ps just +1 tick higher. Asian markets were mixed overnight, with the Nikkei -0.6% and Shanghai Composite +0.3%. European markets look set for marginal early slips with FTSE futures -0.2% and DAX futures -0.3%. In forex, there is a sense of consolidation, but the risk positive and USD  weakness is still present with AUD and NZD outperforming. Only JPY and GBP are giving back marginally. In commodities, the upside breaks on gold (another +1%) but especially silver (a further +5%) continue, with oil just fading slightly at -0.5%.

It is once more rather quiet for the economic calendar today. The only significant data releases come later in the session, with the US Existing Home Sales at 1500BST. Sales are expected to recover significantly in June by 24.5% to 4.78m (from 3.91m in May). EIA Crude Oil Inventories are at 1530BST and are expected to once more be in drawdown by -2.0m barrels (after a surprisingly large drawdown of -7.5m barrels last week).

A key bullish breakout from the DAX, but could there be a better opportunity to buy? The breakout on a strong bull candle on Monday took the DAX decisively clear of the old key June high of 12,915. Remarkably low volume for such a decisive move leaves a few questions for the bulls to answer, and perhaps this played into yesterday’s rather tentative session too. The questions will have been added to by yesterday’s close, where despite adding +1% on the day, the move formed a “shooting star” reversal candlestick. The DAX will often leave gaps unfilled, but given the shooting star, the concern will be there that this may be the precursor to a near term retracement. Futures are ticking lower today to add to this premise. However, given the decisive breakout, the bulls will be looking at any unwind as a pullback and a buying opportunity. The old resistance of the June high at 12,915 is now underlying demand and becomes supportive. The uptrend support (of the past two months) rises at 12,790 today, whilst recent lows also leave a support area between 12,775/12,915 as a near term “buy zone”. Strong medium term momentum confirms the breakout which is arguably an “ascending triangle breakout” and implies at least a move to the all-time high of 13,795 again. Initial resistance at yesterday’s high of 13,313 which now protects the all-time high of 13,795. Support at 12,415 is now key. 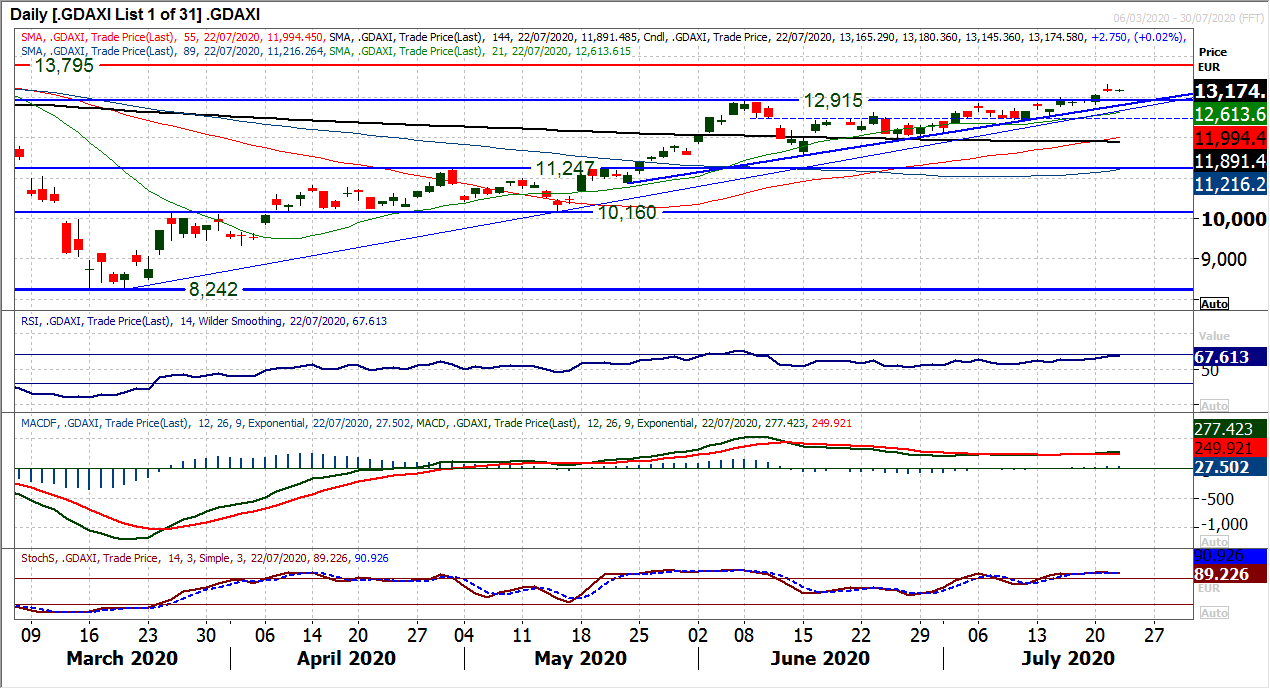 The euro has been building in strength in recent sessions, but yesterday seemed to be a real game-changer. Although it took a few hours to get going following the announcement of agreement for the EU Recovery Fund, once the US session kicked in, the dollar got smashed. Subsequently, EUR/USD flew higher and through a huge resistance at $1.1490 which was the March high but which also now takes EUR/USD to levels not seen since January 2019. The bulls now need to concentrate on holding this break, which seems to be extremely strong, but stretched and open to profit taking near term. Momentum confirms the move higher, with RSI into the 70s, MACD lines accelerating higher and Stochastics strong. However, the caution would come with how stretched the move has become near term. Looking over previous key moves on EUR/USD, we see the RSI very rarely gets over 70. The problem is that when it turns back, it invariably comes with a significant unwind. That would be the fear of chasing this breakout at immediate levels. Whilst momentum is strong, it is stretched. We are happy to run with the breakout on a medium erm basis, as move above $1.1490 has effectively opened moves towards $1.1800 area in the medium term. However, we are also mindful of a near term unwind and a close back under $1.1490 could come with a correction. Initial support is at $1.1470/$1.1490, whilst there is still strong support in the band $1.1350/$1.1420. 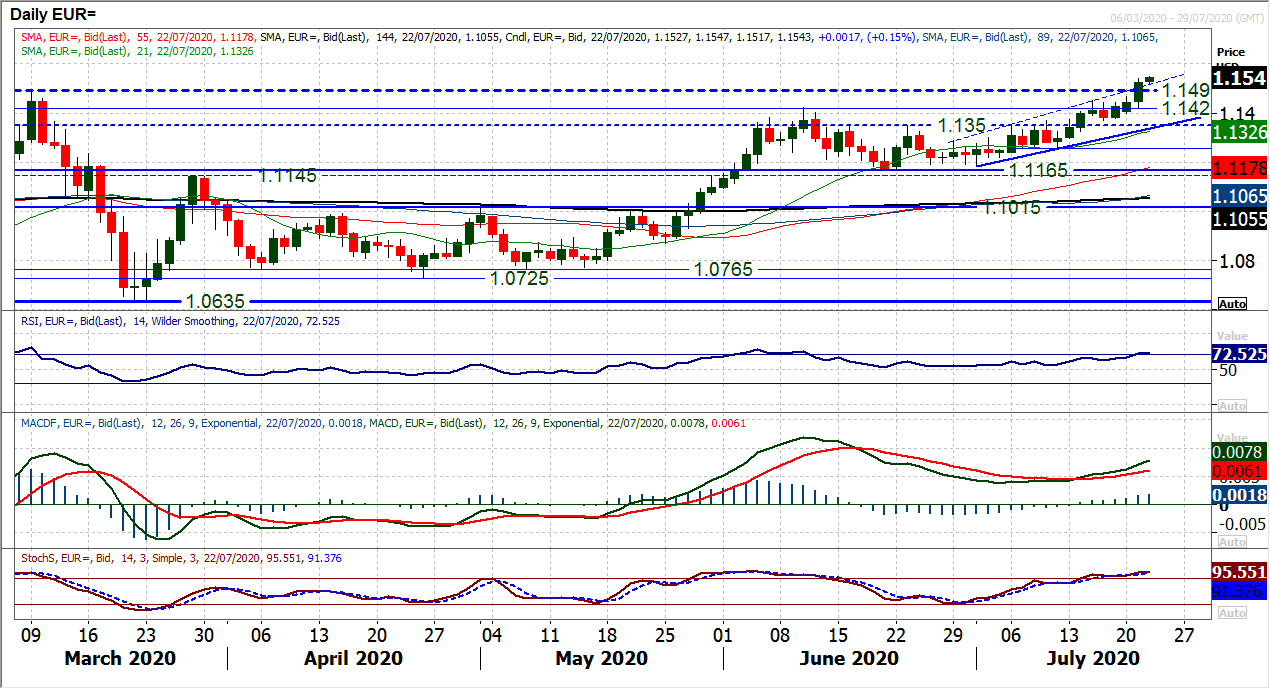 There are key breaks across so many major pairs at the moment, and with Cable, that key break is the upside move above $1.2670 and the big seven month downtrend. Coming with improving momentum (RSI into the mid-60s, Stochastics strongly configured and MACD lines rising, this looks to be a move progressing for a test of $1.2810 now. There has been a slight stalling of the move initially this morning, but the bulls are in a strong position now to use weakness as an opportunity, rather than a threat. Initial support sits on the hourly chart between $1.2640/$1.2670, but essentially support between $1.2540/$1.2670 is a strong area of underlying demand now. There is initial resistance from yesterday’s high of $1.2765. 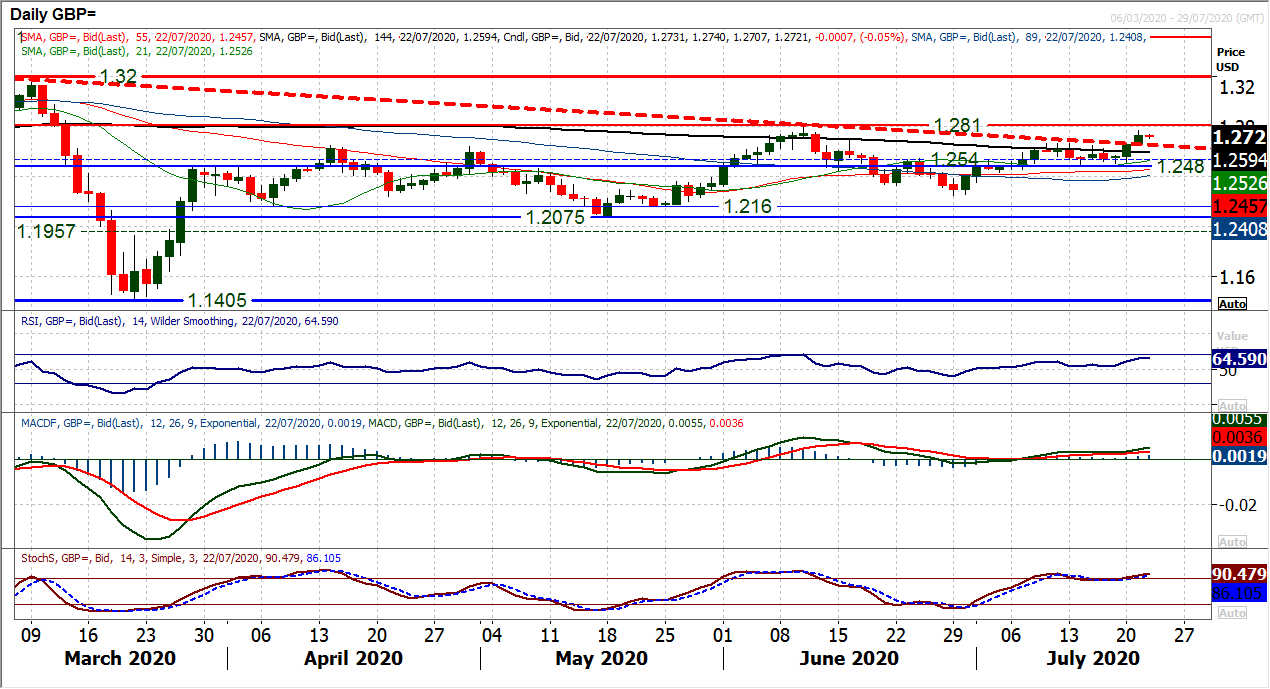 The dollar bulls had a really tough day yesterday. Even against the ultra-safe haven yen, the dollar came under pressure again. The resulting decisive bear candle is now testing again our notion that support continually kicks in between 106/107. For the past five weeks, there have been frequent lows around 106.60, so this will certainly be an initial gauge today. A decisive breach would signal a serious challenge of the 106.00 key floor once more. However, although there is a threat to the support, momentum is still not overly negative yet. The RSI is still holding in the mid-40s and is not suggesting a downside break of 106.60 is on the cards. MACD and Stochastics are also relatively mild in their negative drift. A tick higher early today hints at a degree of support forming for the dollar. A continued failure under 107.00 would though begin to ramp up the downside pressure. Resistance at 107.40/107.50 is certainly strengthening too. 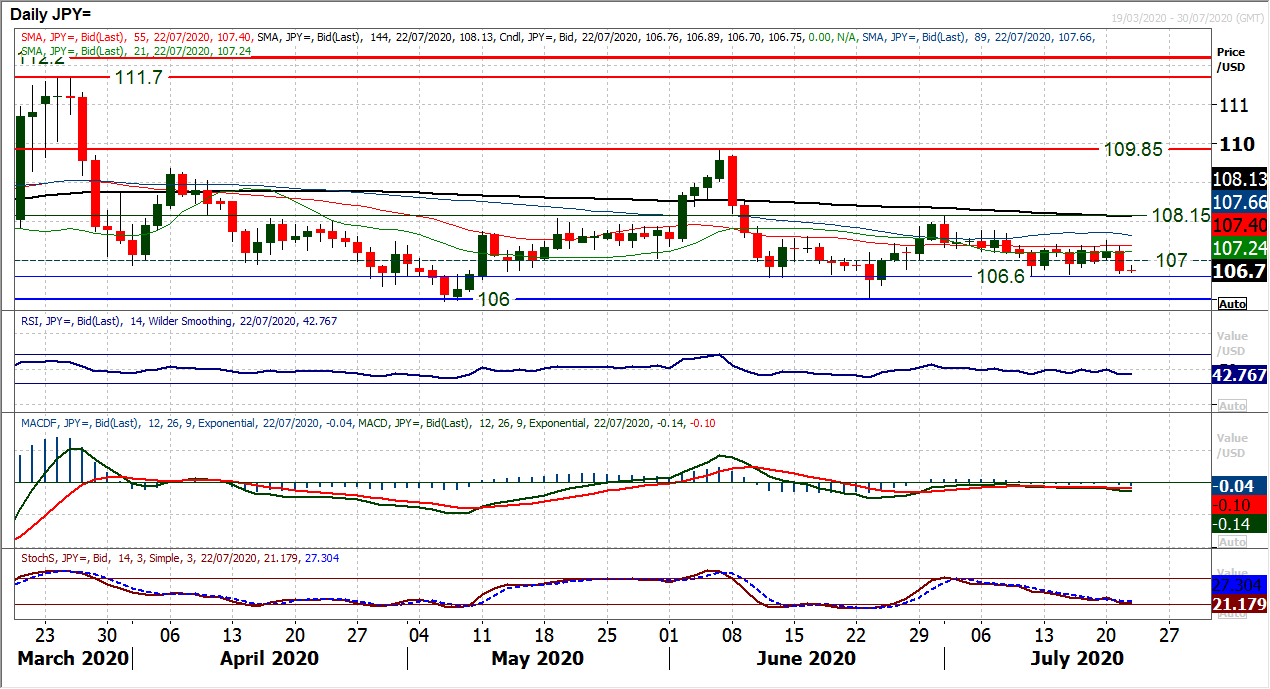 A huge breakout on gold to multi-years has come as the market has accelerated higher in recent sessions. The move through $1818 resistance has really opened the door to the next leg higher. The near term target of $1848 has been achieved, whilst our implied upside targets of the April to June consolidation rectangle have also pretty much all been achieved now too. Essentially it is now just the all-time high of $1920 to come. We have been backing this gold bull run for a while and are still confident of further gains in due course. Technically, the move is strong, but is also becoming slightly stretched too now. Previous bull runs of January and February where the RSI peaked over 70 came with a corrective one day candle failure. This needs to be watched for now, as this move is at risk of near term profit-taking. The hourly chart shows $1837/$1843 as a consolidation area from yesterday, whilst $1818 as the first real support. Hourly momentum is strong but stretched. It would not be a surprise to see at least a pause for breath in the next day or so. 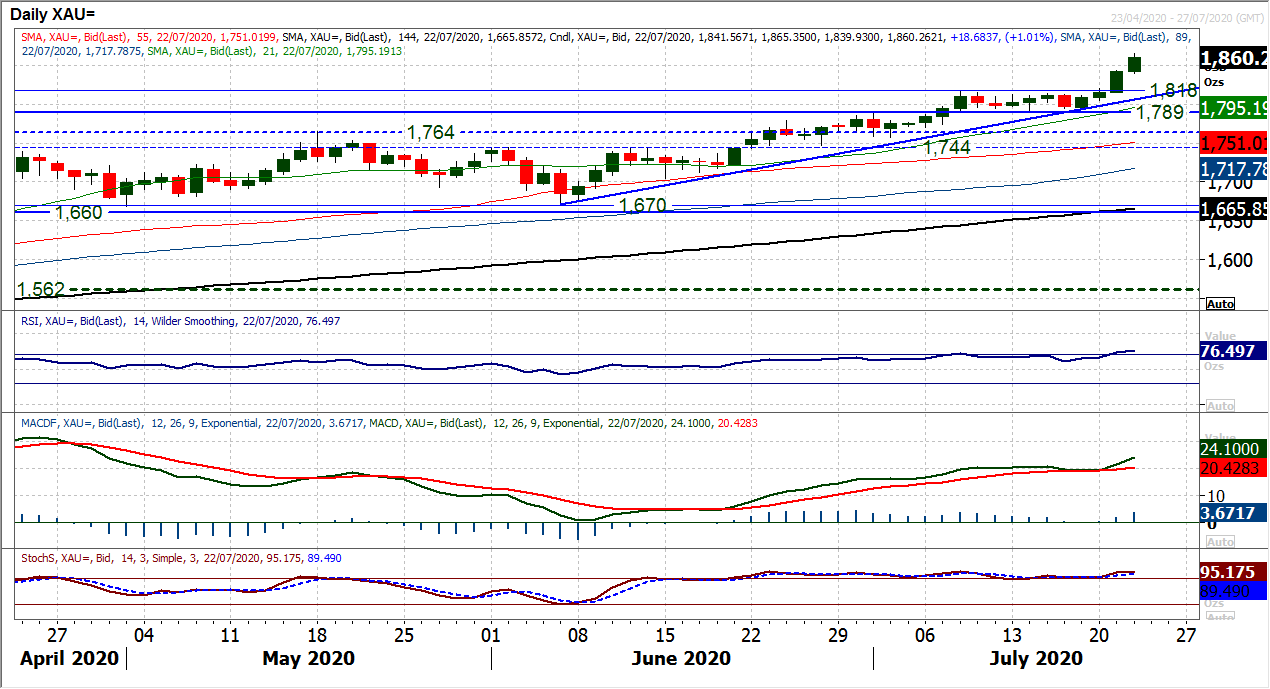 After weeks of struggling under resistance, there has been a drive higher on oil. Yesterday’s strong positive candle added over +2% and has now broken through resistance at $43.95. Brent Crude move to its highest level since March and is looking to now “close” the gap at $45.20. Momentum indicators have gone with the breakout, with the daily RSI is at multi-week highs in strong configuration, whilst Stochastics remain bullish. The final confirmation would be if the MACD lines begin to also swing higher. The closing break above $43.95 completes a mini range breakout and implies an immediate upside target of $46.60 on a conservative basis and perhaps as much as $48.40. If the bulls were to break through $45.20 then there is little real resistance until $50/$54 area. The breakout now means that weakness is a chance to buy. There is a good band of near term support now between $42.35/$43.95 as a “buy zone” for supported weakness. The breakout also means that $41.30 grows in importance as a higher low. 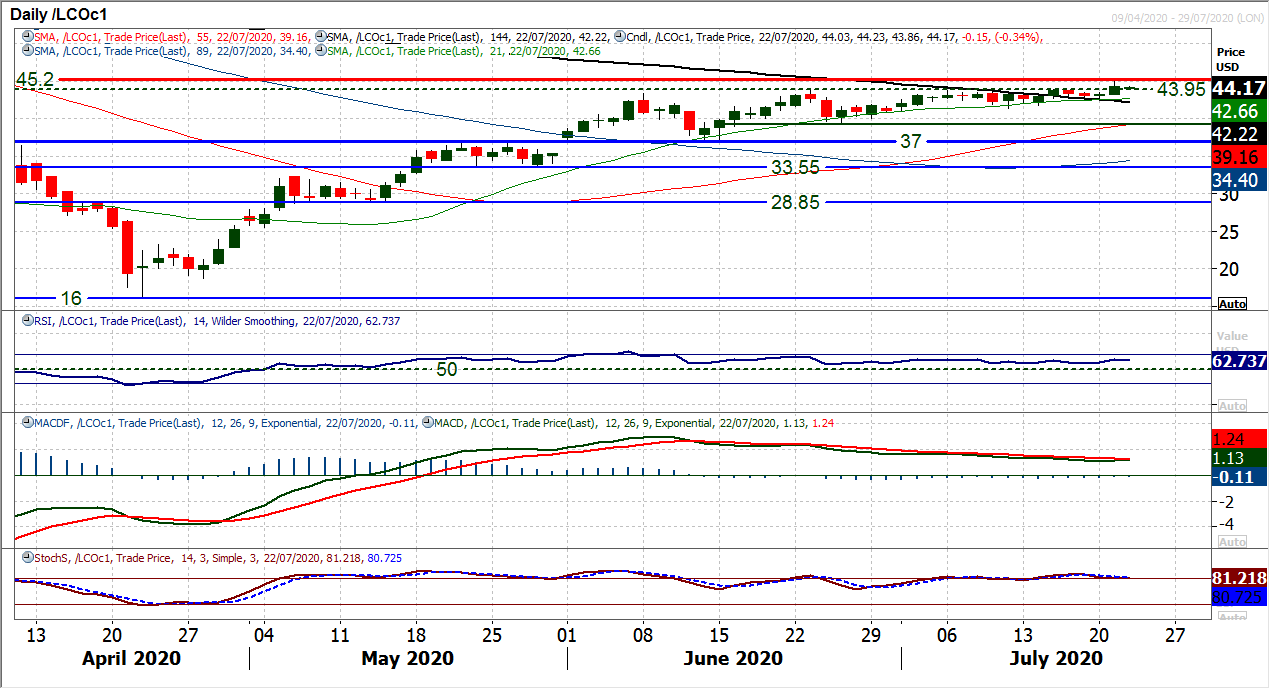 Despite markets breaking out across asset classes yesterday, the Dow still seemed to be rather tentative in its move higher. The gap at 25,940 still remains un-closed, but the important feature of the move is that near term weakness continues to be bought into. A close above 26,940 would put the bulls into more of a strong position once more, whilst a move above last week’s initial rebound high of 27,070 would really open the June high of 27,580. Remember that the NASDAQ is at all-time highs and the S&P 500 has already broken out above its equivalent June high, so Dow bulls will be eyeing this move. We have spoken previously of the 25,300/25,610 breakout band now being an area of underlying demand, and this has been strengthened by the pick up from 25,504 this week. Momentum is tentatively positive now. Stochastics remain strong above 80, however, with RSI just hovering around 60 and MACD lines edging higher above neutral the bulls are dragging their feet still. A move above 27,070 would likely release the shackles. 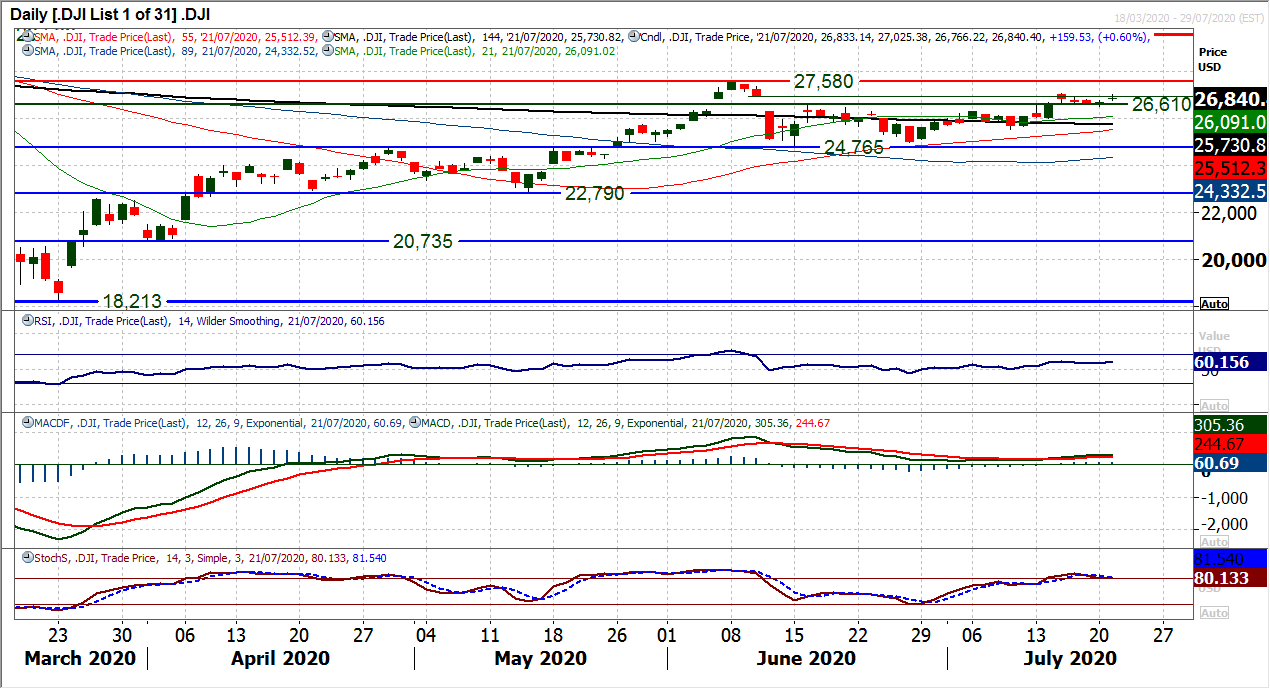