The near term dollar rally has been boosted again in the wake of Friday’s Nonfarm Payrolls report which roundly encouraged and drove a decisive reaction on bond markets. A yield curve “bear steepener” (where longer dated yields rise faster than shorter dated yields) tends to be dollar supportive and this reaction set the dollar back on its recovery path once more. The volatility on Wall Street with a sharp tech sector profit-taking muddies the water of the dollar, however, with Wall Street shut for Labor Day public holiday today, the trend of the near term dollar rebound is still intact. However, with bond markets also shut, there is a sense that this will be a muted session today. Despite this, the hard nose stance of both sides in the EU/UK post-Brexit trade negotiations is weighing on sterling this morning. The soft deadline of mid-October for any agreement means that both sides seem to be ramping up the rhetoric and sterling is caught in the crossfire. It could get messy for GBP in the coming weeks. 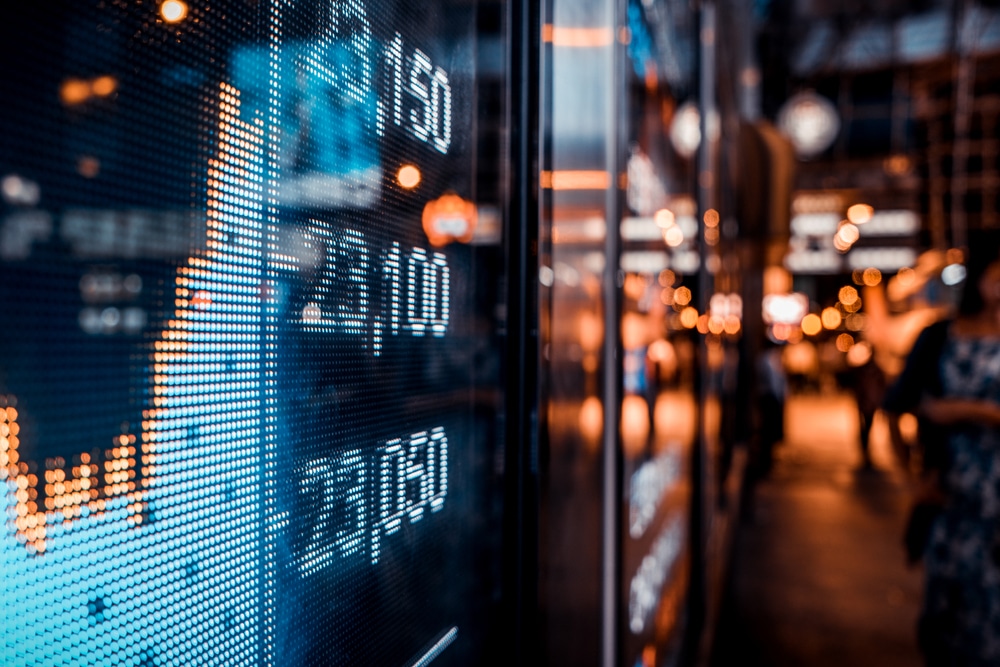 Wall Street closed lower on Friday but well off session lows as  the S&P 500 closed –28 ticks (at 3426), with no futures today due to the Labor Day holiday. Asian markets were lower overnight (Nikkei -0.5% with European markets mildly higher in early moves. In forex there is a mild USD positive move, driven mostly with GBP weakness. In commodities gold is a shade lower.

It is a US public holiday for Labor Day today, so the economic calendar is pretty light. The Eurozone Sentix Investor Confidence at 0930BST is the only real data to be aware of, with consensus expecting a mild improvement to -10.8 in September (from -13.4 in August).

A risk reduction into the end of last week came as equities sold sharply lower. This has weighed on Aussie/Yen, but is there an opportunity now to buy again? For now, this move looks just to be one of an unwind back towards a confluence of support. The breakout support of the old June, July and August highs comes in between 76.76/76.85. There is the support of the rising 21 day moving average (around 76.75 today) which has often been a good gauge for the near term corrections during the market rally. There is also a four month uptrend (currently 76.50). Near term outlook has clearly been under pressure, but Friday’s mild positive candle suggests an easing of corrective pressure and support starting to form again around 76.50/76.85. If this support continues to hold, then the bulls will look at this as an opportunity to buy once more. The hourly chart shows a band of support 76.30/76.70 and the bulls would not want to lose the key higher low support at 75.55 now. The recent high of 78.45 is the main resistance now before the key 2019 high of 80.70. 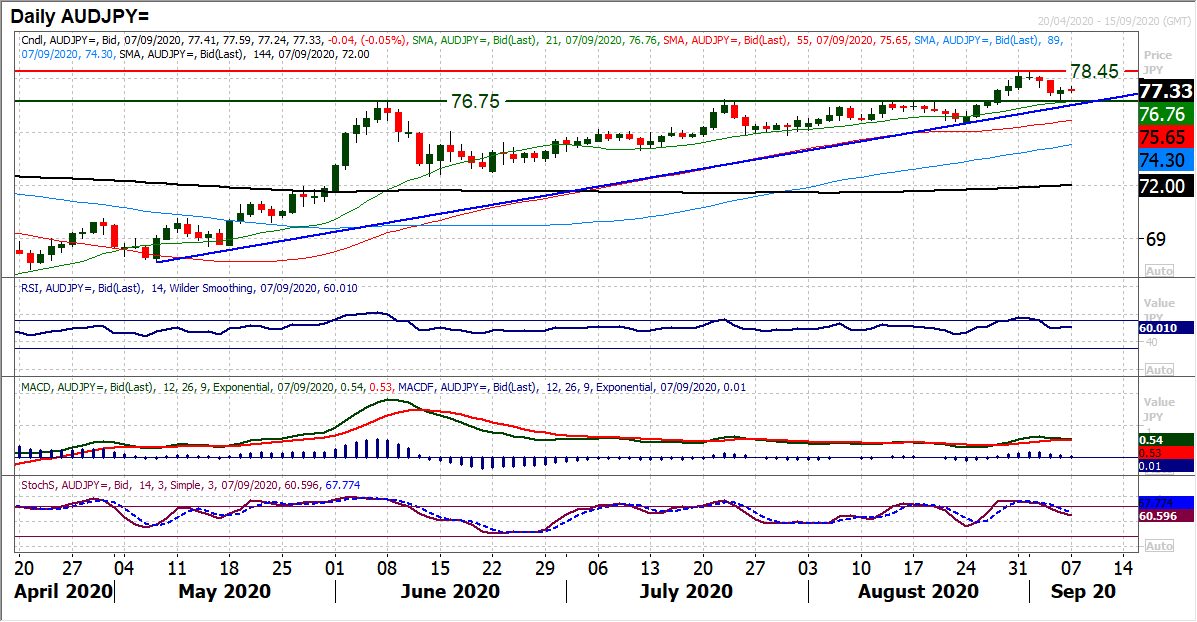 The dollar was pulled back on forth on Friday to leave a fairly neutral candle coming into the new week. A dollar positive read through of the Nonfarm Payrolls report pulled EUR/USD lower initially only for the selling pressure on Wall Street to ease into the close, pulling EUR/USD back higher. Wall Street is closed for public holiday today, so the session is likely to be muted. It is interesting to see the daily candles begin to look more uncertain, with two successive very small bodied candlesticks. The corrective momentum which has dragged the market back from 1.2010 has begun to stabilise now. This is coming just above the support of a near three month uptrend (at 1.1755 today) whilst the key medium term support at 1.1695/1.1750 also remains intact. Consolidation will be the name of the game today, but is support now beginning to form for another move higher? The hourly chart shows near term resistance 1.1865/1.1880 and a move above would begin to generate positive momentum once more. 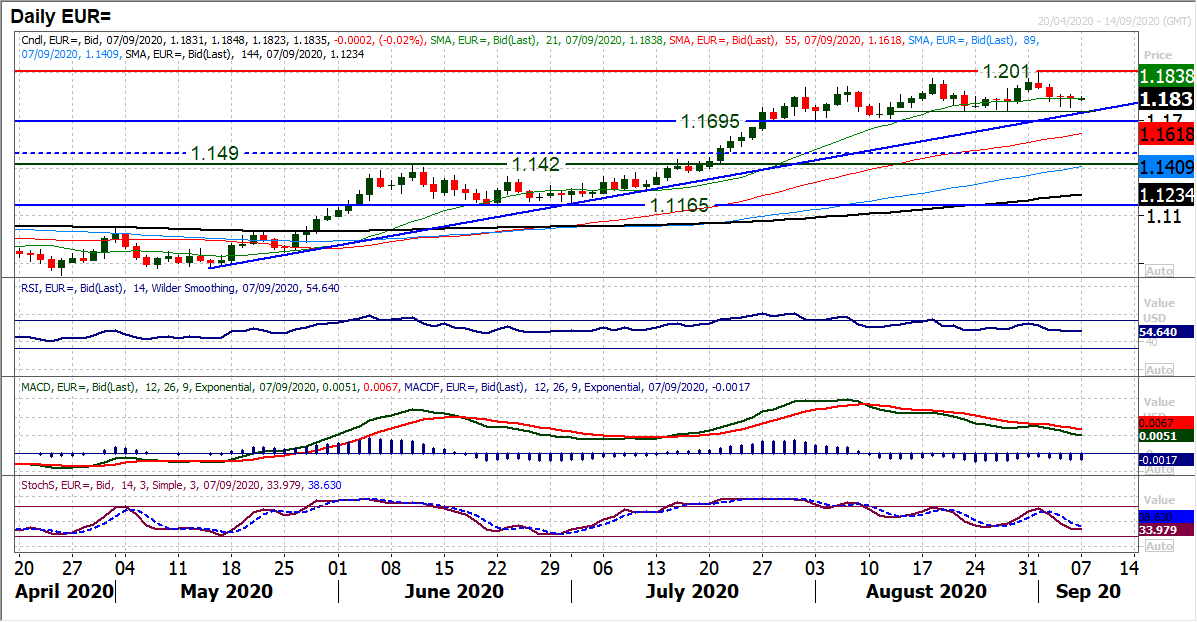 Cable has slipped back in recent sessions as USD rebound momentum has weighed. However, newsflow on Brexit trade negotiations will be key in the coming days. Even with the US on public holiday, the GBP side of the equation certainly has the power to move Cable. Friday’s candle was a “long-legged doji” (denoting uncertainty) but sterling looks to be under growing pressure again coming into the European session today. The market is testing the support of a nine week uptrend (around 1.3265 today). We spoke last week of the band of support of the old breakouts 1.3185/1.3265 and this continues to be tested. Friday’s low of 1.3175 helped to sustain the band of support, whilst the rising 21 day moving average is a gauge of support at 1.3185 today. Near term sliding momentum looks to be unwinding a medium term bullish outlook but how the market responds in the band of support in the coming days will be key. Hourly chart indicators show sterling still under pressure and eyeing a test of the support. The bulls need a move above 1.3265 as a start, whilst above 1.3320 to regain confidence. 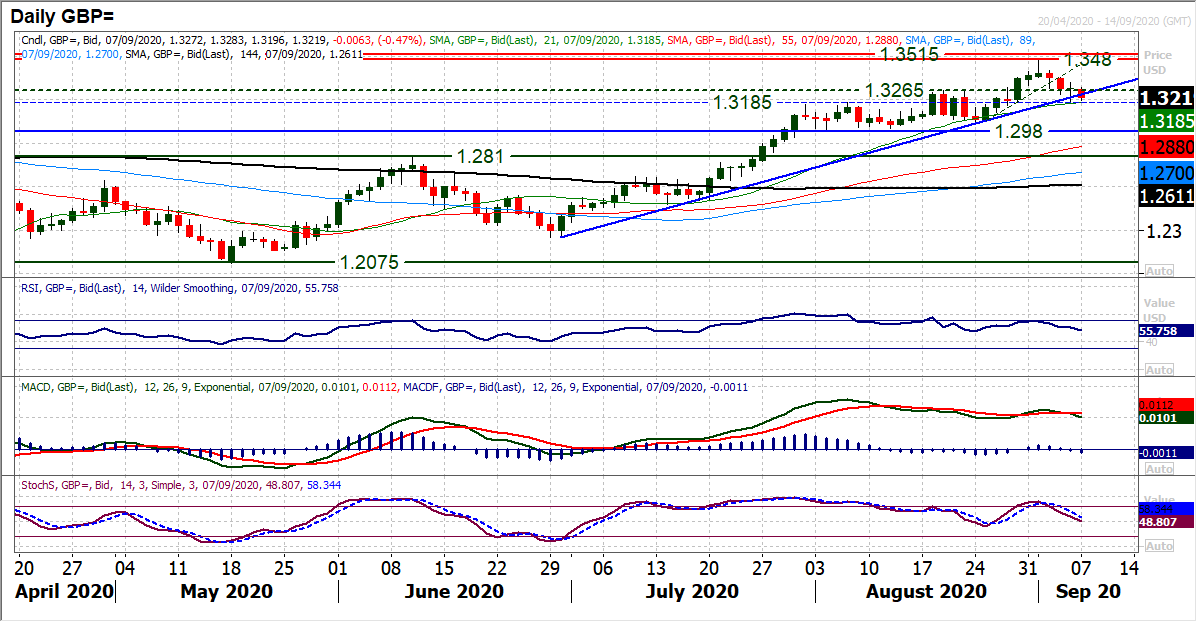 Even as the dollar gained good ground across major pairs on Friday, it was interesting to see little real traction in the move higher on Dollar/Yen. How the market reacts to the two month downtrend (around 106.50 today) will be key early this week. Given that the market has failed around 106.50 in the past couple of sessions (which is also a near term pivot on the hourly chart), there is a sense that rallies are still struggling. The 55 day moving average (today around 106.45) adds to the basis of resistance around there. We have said for a while that rallies into the 106/107 band are a chance to sell, and unless there is a decisive close clear above 107.00 we will expect this to continue to be the case. It is a US public holiday today so price action will likely be muted. The hourly chart shows a degree of consolidation which is seeing the run higher lose impetus. We favour this latest move higher to roll over and pressure to resume back towards 105.10 in due course.  A decisive move back under 106.00 would trigger this move. 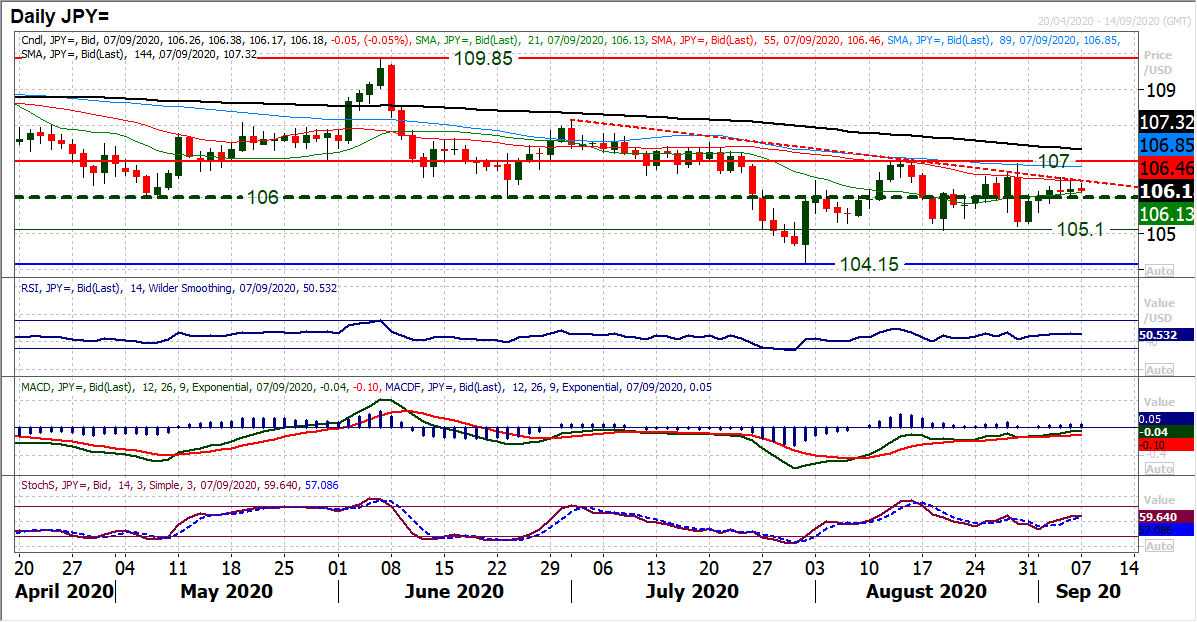 During the latter stages of last week we discussed the importance of the market continuing to form support around the 23.6% Fibonacci retracement (of $1451/$2072) at $1926. Intraday tests continue, but the consistent appetite to protect this support into the close is encouraging for the gold bulls. This has been a spluttering phase in recent weeks, where the market has effectively formed a range between $1900/$2000 (with the support low the low at $1902 and resistance of rebound highs at $1991 and $2015. Daily momentum indicators have moderated back into broadly neutral positioning with this loss of traction. It has also meant that the rising three month uptrend which has supported the market since mid-June, is now being breached (albeit not decisively broken yet). Breaking an uptrend is not the end for the bulls, but it does reduce their conviction. We still look for price action to be the determining factor, so continuing to close above the 23.6% Fib important, and certainly closing above $1902. The hourly chart shows resistance between $1945/$1955 needs to be broken to re-invigorate the bulls. We still favour this support holding and for the weakness to be bought into, but our conviction is beginning to be tested. 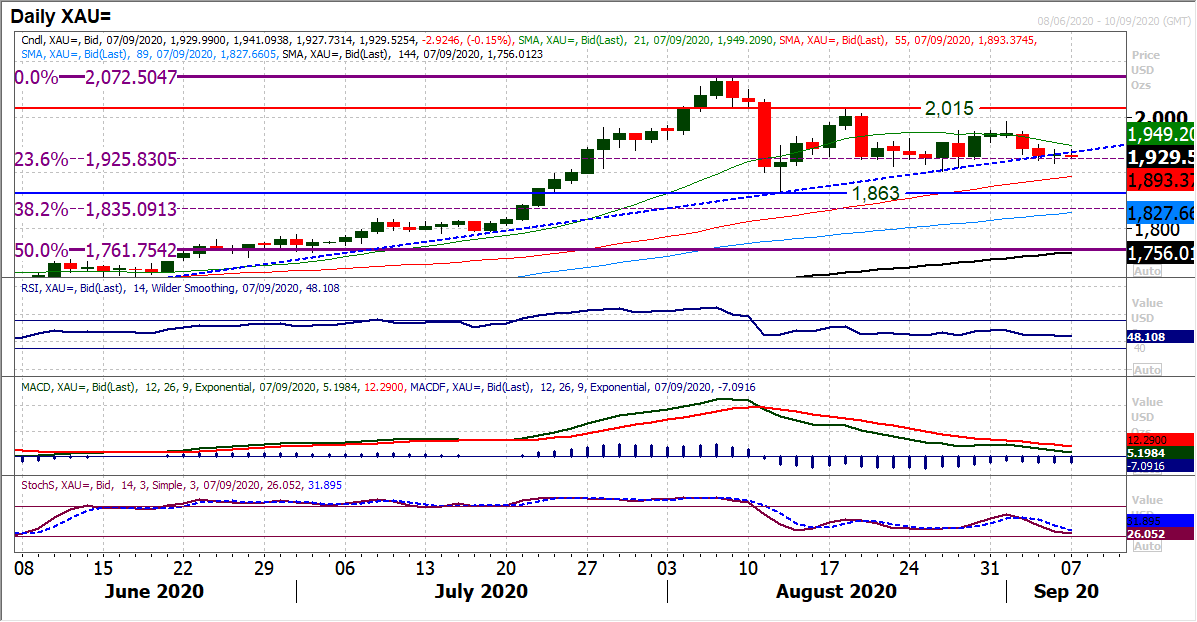 Selling pressure is mounting by the session now. A decisive correction is gathering pace as Brent Crude closed decisively clear below the $43.60/$43.90 support band on Friday. With the sharp deterioration in momentum indicators (RSI accelerating lower into the 30s, whilst MACD and Stochastics also deteriorate quickly), this now suggests the market is on track to test $41.30. This is the first really important support of the recovery, being the floor throughout July. A breach of this support would turn a near term unwind into more of a medium term correction. Resistance is now forming where intraday rallies are sold into at lower levels. We now see a near term ceiling forming where old support becomes new resistance between $43.60/$44.55. A close below $41.30 and the next key support is at $37.00. 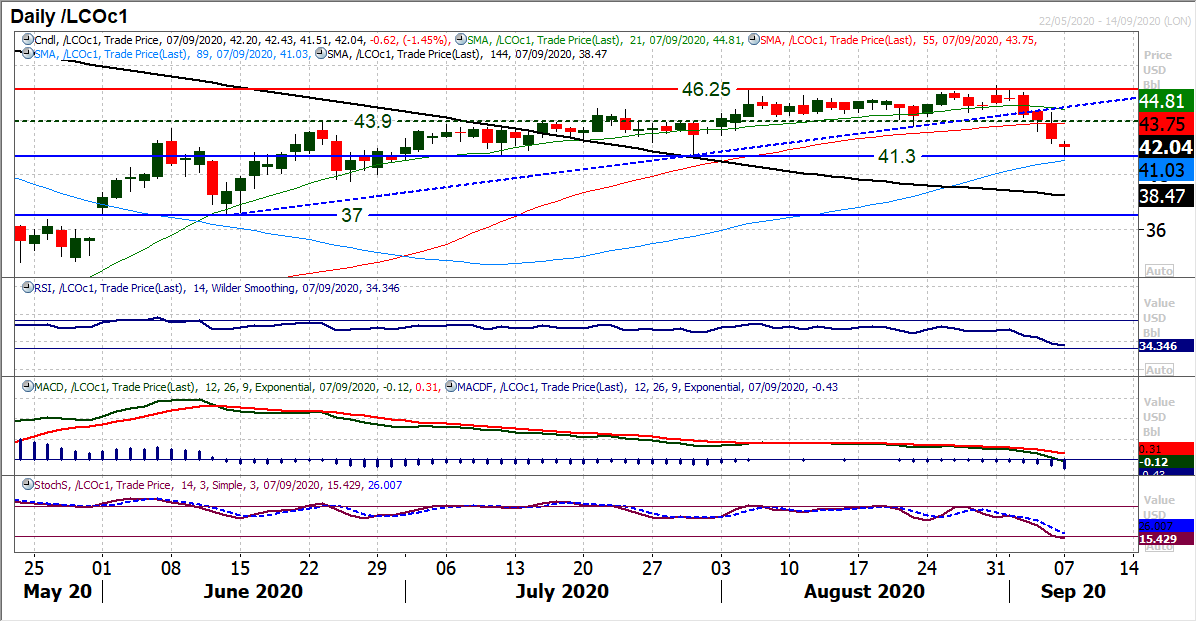 The sharp correction of the US tech sector has significantly rocked the confidence of Wall Street bulls. Volatility has spiked higher and a second session of selling pressure hit the Dow on Friday. Despite this though, the market closed well off session lows and some important technical support levels held firm. The confluence of the big medium term support at 27,580 and the five month uptrend remains intact. Also the market closed back above the 28,000 support. The market is shut for public holiday today, but for now the near term pressure remains on. Response to these support levels will now be key as for now, this move is just another near term retracement within the medium to longer term bull market. Breaching 27,580 would be a real blow to this now. Initial resistance is now 28,540/28,735 which needs to be breached for the bulls to regain some lost confidence and eye the 29,200 high. For now, we remain buyers into weakness but the outlook could quickly change. 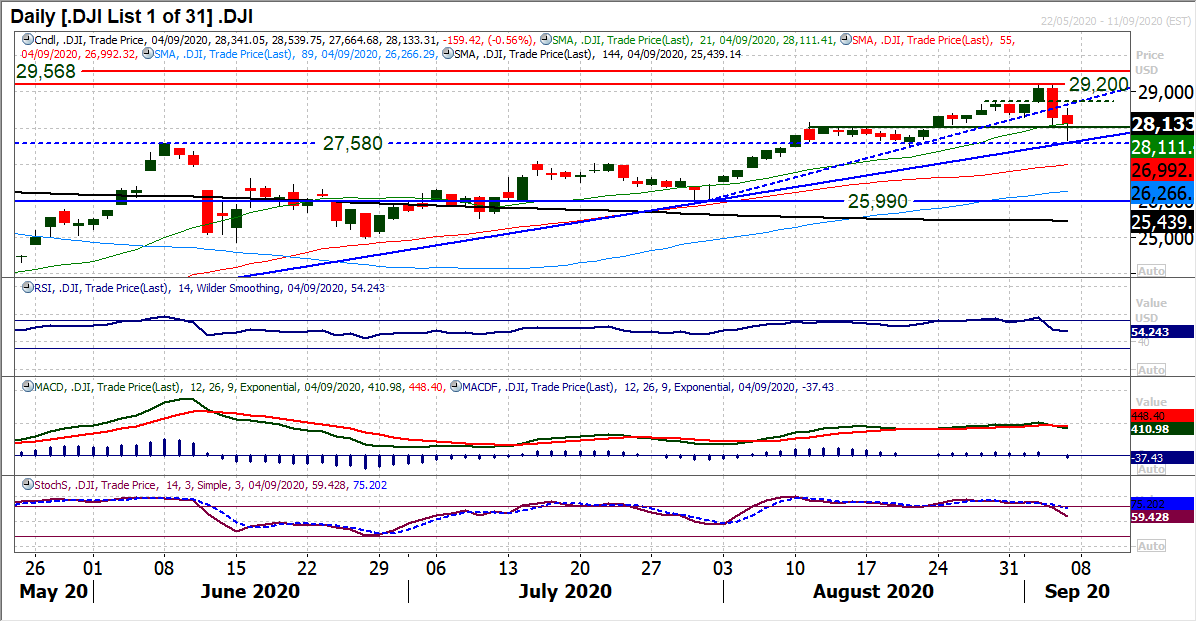