With the prospect of agreement in Congress over a fiscal support package still some way off, Wall Street sold off into the close last night and leaves a question mark over the tone of risk appetite coming into today’s session. A “bearish engulfing” candlestick on the S&P 500 (also known as a bearish key one day reversal) meant that the index just failed at reaching its all-time high and could now begin to weigh on the outlook for equities. Despite this though, the sharp rise in Treasury yields is still playing out and this is impacting across dollar major pairs and has driven an enormous corrective sell-off on gold and silver. The Dollar Index would take another step forward in recovery on a move above 94.00 (which would equate to moving below 1.1695 on EUR/USD and sub 1.2980 on Cable. The Reserve Bank of New Zealand did little to change its monetary policy stance overnight (as expected), but continues to prepare for the potential of further easing, including the use of negative rates if needed. UK GDP for Q2 showed a growth contraction of -20.4% which shows the extent of the huge economic hit of the pandemic. 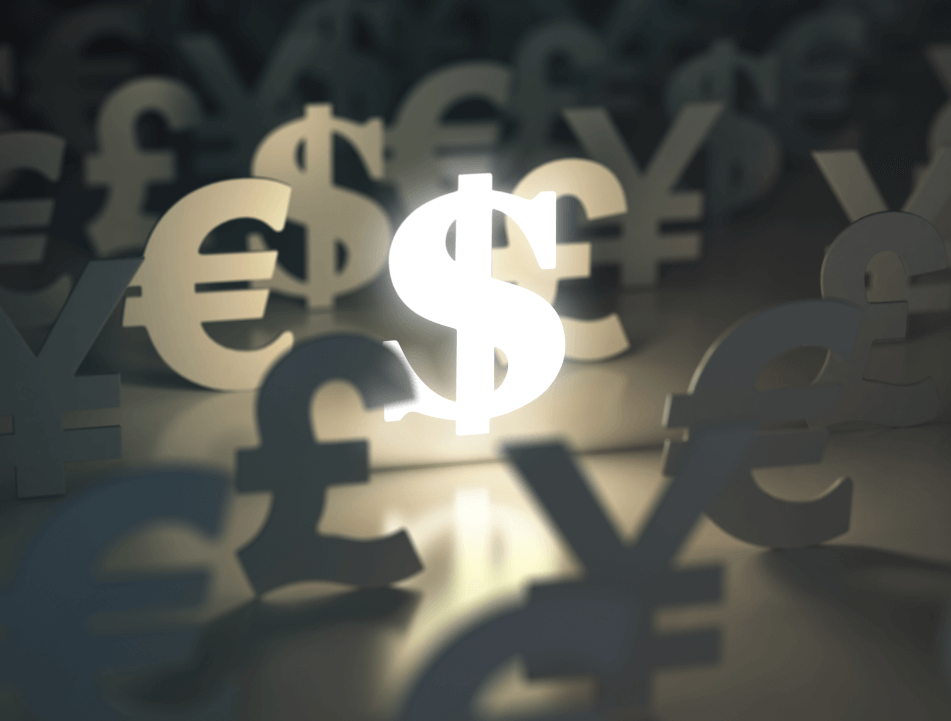 Wall Street ended the session on a sour note last night as selling pressure accelerated into the close, with the S&P 500 -0.8% at 3333. Futures have stabilised this morning and are looking mildly positive (E-mini S&Ps +0.5%) which has helped Asian markets (Nikkei +0.4%, although Shanghai Composite was -0.9%). In Europe, markets are looking mixed, with FTSE futures +0.2% but DAX futures -0.2% (when FTSE outperforms DAX it tends to come with mild risk negative tone). In forex, the USD rebound continues to run, with JPY under pressure (as Treasury yields continue to rise) but also AUD and NZD weaker (the latter feeling the hit of the RBNZ meeting). In commodities, it has been a wild night for gold and silver although both are a shade higher coming into the European session. Oil is over +1% higher and it will be interesting to see if the bulls can hang on this time.

On the economic calendar, the main focus is for US inflation at 1330BST which is expected to see US headline CPI growing by +0.3% on the month to leave the year on year CPI +0.8% higher in July (which is an increase from +0.6% in June). US core CPI is expected to grow by +0.2% on the month which would mean the year on year inflation slips back to +1.1% (from +1.2% in June). The EIA Crude Oil Inventories at 1530BST are expected to show another drawdown of -3.1m barrels (-7.4m barrels last week).

There is also a Fed speaker to watch out for with the FOMC’s Robert Kaplan (voter, centrist) at 1600BST.

The outlook for the DAX has improved with yesterday’s strong session which added over +200 ticks. There seemed to have been a shift in sentiment. After several negative candles stuttering at resistance around 12,750/12,800 suddenly the bulls have broken out. The main technical improvement has come in the market ending the sequence of lower highs of the past few weeks. Leaving a higher low at 12,517 now means higher lows and higher highs, the building blocks of a new positive trend. Pulling through the resistance band 12,750/12,915 has put the bulls back in control. This is beginning to drive a more positive configuration on daily momentum indicators, with the RSI accelerating into the 50s and Stochastics also pulling higher, whilst MACD lines are looking set to bull cross. After the disappointing close on Wall Street, there could be some early weakness today, but the bulls will now looking to use 12,750/12,915 as a basis of support to build from. The bulls will now look for a close above 12,915 to confirm the improvement and then to open the July high of 13,313 as the next test. Support at 12,517 is now a higher low above 12,255 which is increasingly important as a basis of support now. 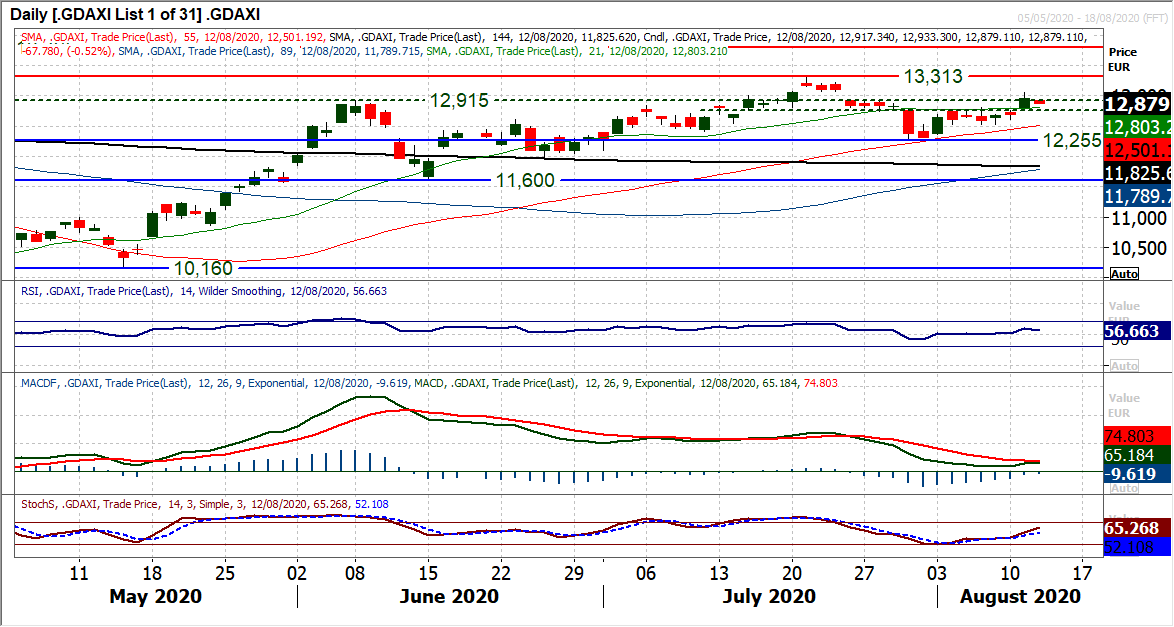 Yesterday’s session confirms that there has been a change in sentiment for the dollar. The European morning looked to be driving EUR/USD back higher, but a bull failure has left a growing negative bias within the trading range 1.1695/1.1915 which could end up now being a top pattern. Momentum indicators are increasingly set up for a corrective move, with near term bear cross sell signals on MACD and Stochastics, whilst RSI is now back under 60. A close under 1.1695 would complete the top and imply around -220 pips of corrective move, back towards the old key 1.1490/1.1500 breakout area. The near three month uptrend support comes in at 1.1530 today. The hourly chart reflects the growing negative bias now on EUR/USD, with the failure once more around 1.1800 which grows ever more prevalent as a pivot (currently resistance). Hourly momentum also suggests that intraday rebounds are a chance to sell for the test of 1.1695. Initial support beyond a breakdown comes in at 1.1580/1.1625. A decisive move above 1.1800 would improve the near term outlook within the 220 pip range again. 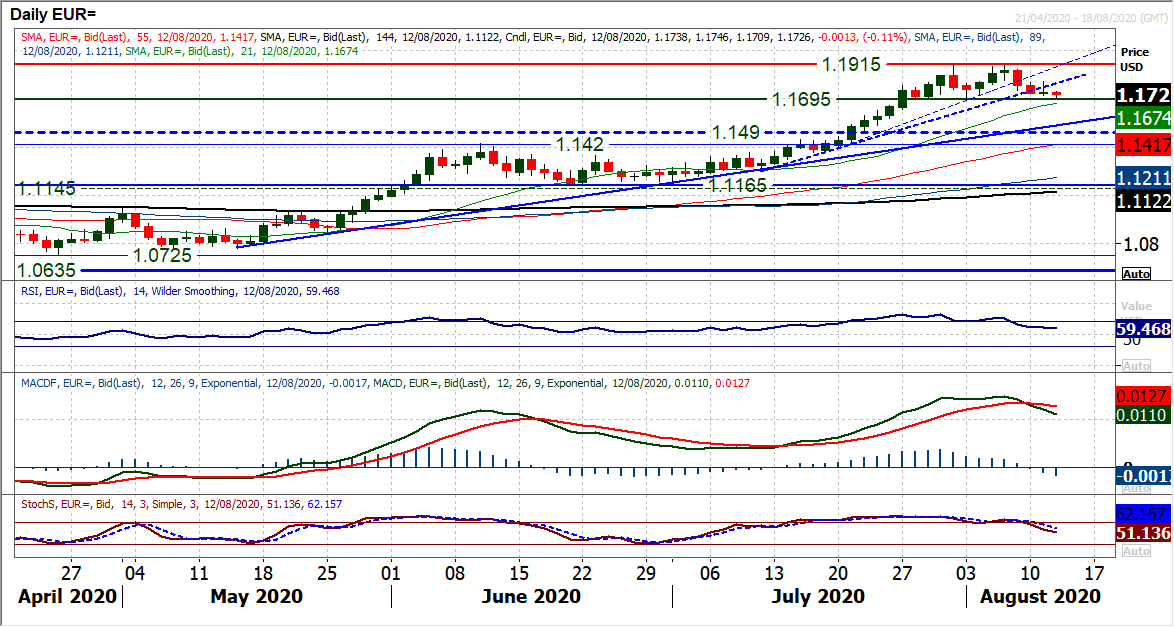 With a similar looking configuration to that of EUR/USD, we see Cable is also developing a negative bias within its near two week trading range now. Again a bull failure in yesterday’s session leaves the market at risk of a near term top pattern. The range between 1.2980/1.3185 (205 pips) means that a closing breakdown below 1.2980 would imply a pullback towards 1.2775. It would mean that the 1.2810 old breakout, which is now supportive, would become a prime target area. Momentum indicators are not as developed in their corrective set up as EUR/USD but MACD lines are in the process of now bear crossing, whilst RSI and Stochastics are also sliding. The hourly chart reflects this bear bias, with the resistance now between 1.3100/1.3130 as we look at intraday rebounds increasingly as a chance to sell for a test of 1.2980. Beyond any breakdown, support is initially at 1.2910/1.2940.