As the negotiations between Democrats and Republicans over fiscal support seem to be dragging and is just beginning to weigh slightly on sentiment today. Treasury yields have dropped back marginally (in the process, pulling a mild bull flattening move through the yield curve). Furthermore, there is a slight pullback on equities too. With the yield curve bull flattening, a dollar rally that has been threatening in recent sessions has just taken a step back once more. This is allowing the sharp sell-off on gold to ease somewhat. The questions will begin to be asked as to whether the past few sessions have been a blip, allowing the bigger trends of dollar weakness and gold strength to renew with trend potential. It is too early to determine, but the next few days could be telling. The longer that the US fiscal support package takes to agree, the more nervous that markets will become that the package will underwhelm. 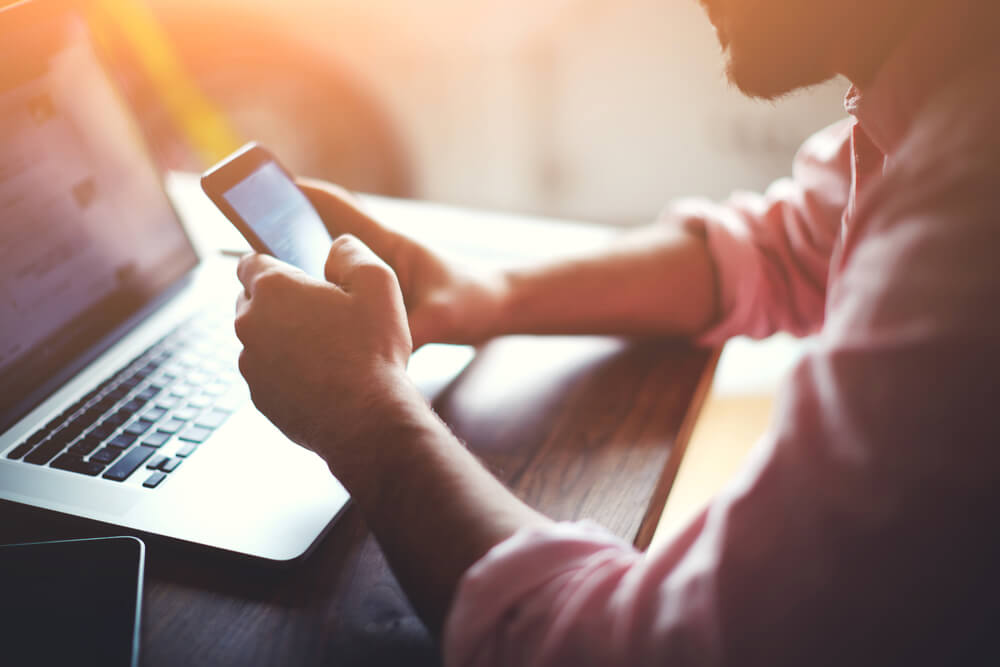 Wall Street closed strongly higher once more, with the S&P 500 +1.4% at 3380 and a sneeze away from the all-time high of 3393. However, US futures are a shade back this morning, with the E-mini S&Ps -0.2%. This has though still enabled Asian markets a positive session overnight, with the Nikkei +1.8% and Shanghai Composite +0.1%. However, European markets are looking far more cautious, with the FTSE futures -0.9% and DAX futures -0.3%. In forex, there is a USD slip, with underperformance across major pairs aside from NZD which is still struggling in the wake of the RBNZ. In commodities, the selling pressure on gold has stabilised with the price +0.8%, whilst silver is +1.2%. Oil closed as multi-month highs yesterday but has just pared this move today, around -0.5% lower.

It is a relatively quiet day on the economic calendar. The US Weekly Jobless Claims will be of primary interest at 1330BST with a further improvement to 1.12m (from last week’s positive surprise of 1.19m claims).

The Kiwi has looked rather vulnerable in the past week, and the reaction to the RBNZ meeting yesterday was a decisive downside break of the previous breakout support at 0.6585/0.6600. It is interesting to see that as the European session takes over today, the US dollar is ticking lower across every major pair apart from NZD/USD. Having posted a lower high at 0.6690 (under 0.6715) a new negative trend of lower highs and lower lows  is now beginning to take hold. Even though the market rebounded into the close last night, this looks to have been a minor technical rally within what looks to be a deteriorating outlook, and another chance to sell. The daily momentum indicators are faltering on a consistent basis now, with RSI at near three month lows and under 50, whilst MACD lines are falling at multi month lows and Stochastics also taking negative configuration. The market now seems to be selling into near term strength, with yesterday’s high almost 0.6600 to the pip, and this morning’s early high also failing at 0.6600. It means that Tuesday’s failure at 0.6625 is a gauge of increasingly important resistance, making a mini sell-zone now between 0.6585/0.6625. The market looks set to test the mid-July support at 0.6500, whilst if the selling momentum really takes hold, 0.6370 comes into play. 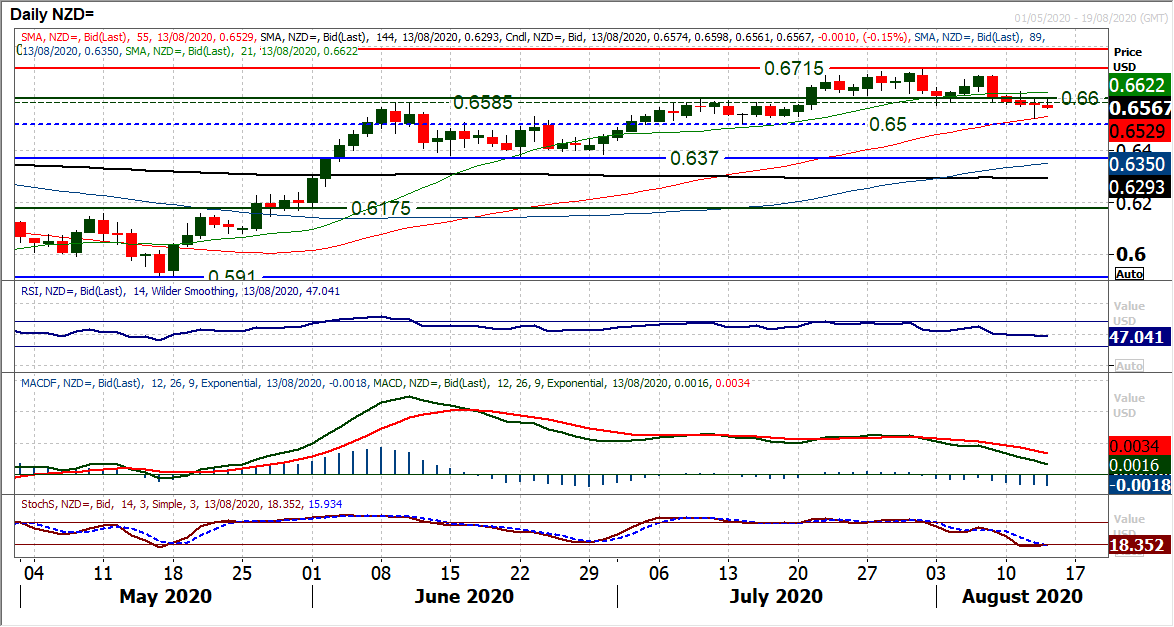 Although the dollar has been looking stronger in recent sessions, there has been a pick up in EUR/USD which has prevented the market from topping out. We have discussed previously the importance of 1.1695 support, and this is clearly a level that the euro bulls want to defend, at least for now. Yesterday’s candle rallied from 1.1710 to post a positive close which keeps the dollar bulls at bay. Furthermore, there has been a move above 1.1800 which has once more neutralised the immediate potential for a top pattern. The hourly chart shows that throughout the past couple of weeks, 1.1800 has been the basis of a mid-range pivot and in moving above this pivot today, the outlook begins to improve once more. Hourly indicators show a ranging configuration developing, with hourly RSI between 30/70 being the classic representation of this. Initial support is now 1.1780 to maintain the neutral aspect of this move. Initial resistance is at 1.1850. We are still on alert as to how this more that two week consolidation range will develop and given the slide back in daily momentum, we believe there is still a risk of a top pattern formation. However, a second positive candle completing today, with a move above 1.1800 would maintain this neutral stance. 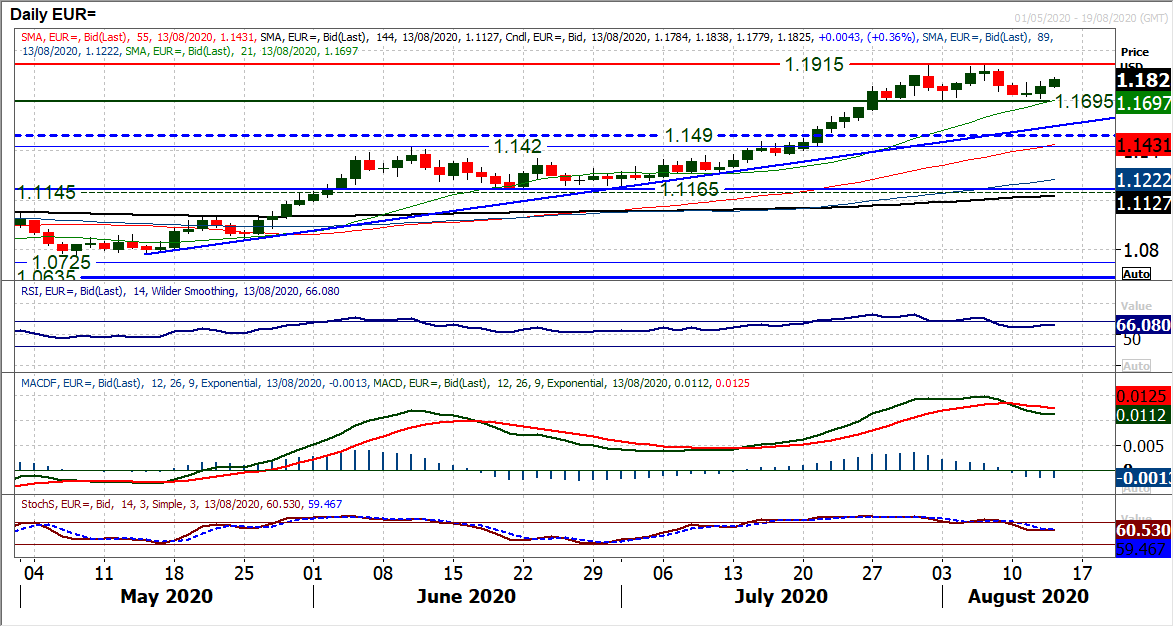 There is a growing ranging look to several of these major forex pairs as the dollar bulls just take a step back again this morning. This is pulling Cable marginally higher once more within its 205 pip two week trading band. Despite this, there is also the ongoing sense that a corrective move (dollar strengthening) is still threatening. Daily momentum indicators are sliding back, with the most pertinent signal being the negative cross on the MACD lines. This is the first negative cross since mid-June, when Cable then was forming a near three week corrective slide. The support at 1.2980 has held so far this week and there is no price confirmation of a corrective move. However, we see the balance of candlesticks forming a negative bias now, where intraday rallies are seen to be a chance to sell. The lower high this week at 1.3130 adds to this negative bias and a failure to overcome this resistance will see the threat of correction persist. The hourly chart indicators have a mild negative bias and we prefer to fade rallies towards the 1.3100 area (a basis of a mid-range pivot) for pressure back towards 1.2980 in due course. A closing breach of 1.2980 would complete a top pattern and imply a move to test the previous breakout support at 1.2810 as a minimum. 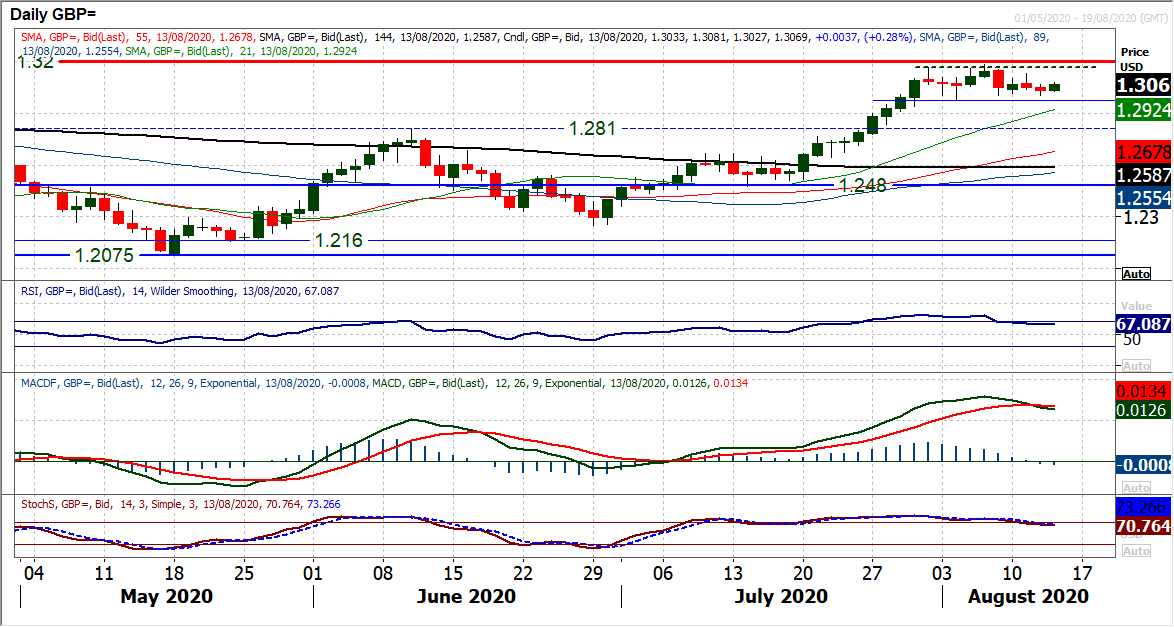 The outlook for Dollar/Yen has improved considerably in the past few sessions, but can this continue? In the wake of the payrolls report last Friday, US bond yields have taken off and this has pulled Dollar/Yen sharply higher. Technically, the move above 106.60 has been a key positive break. It confirms an improvement of higher lows (105.30 above 104.17) and now higher highs too (above 106.45). Daily momentum indicators are improving, with the RSI and Stochastics at six week highs, whilst MACD lines are accelerating higher off a bull cross. As the market builds an uptrend of recovery (which comes in at 106.40 today) the close above 106.60 now opens the bigger test of the first real lower high of the sell-off, up at 107.50. Despite this, the first real test of this recovery is being seen this morning. As the market has slipped back from yesterday’s high of 107.00, the hourly chart shows the market coming back towards 106.45/106.60 breakout levels. This is near term pivot support that if the bulls are in control, should be seen as a chance to buy again. A close back under 106.00 would be a key disappointment now and suggest a bull failure. This recovery is now at a key crossroads. 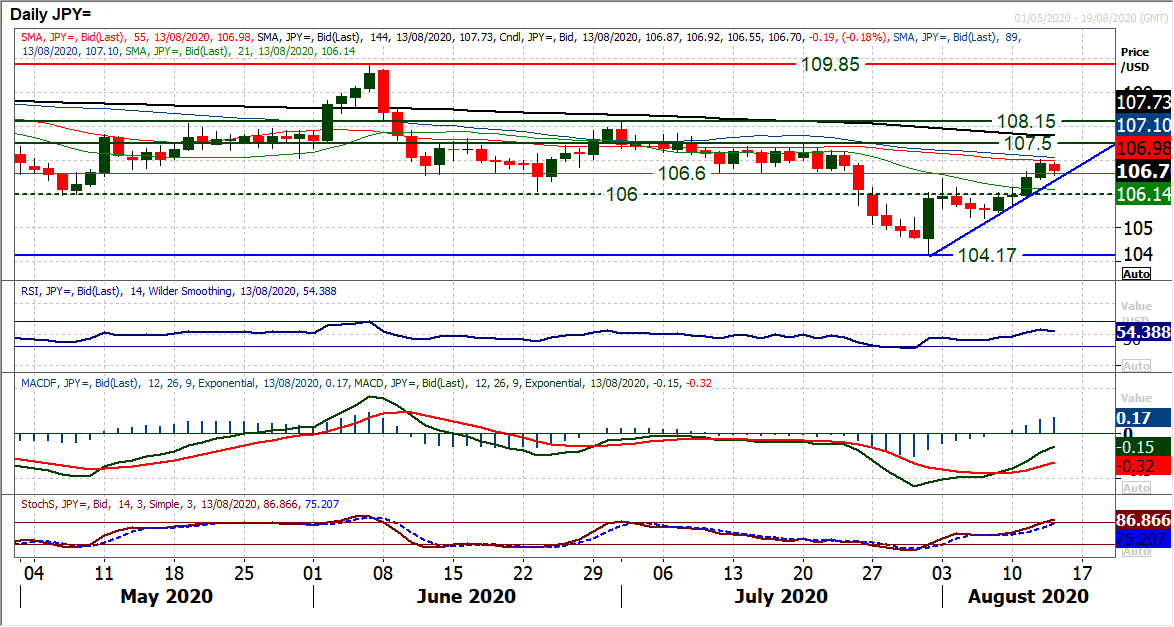 When we discussed the rising two month uptrend (currently $1872) we never imagined that the market would retrace the bull move so quickly. Over the course of just over three sessions, gold retreated over -$200, almost exactly -10%. Our view has been for a while now that once the corrective move has shaken out the weak bulls, that gold would have another strong opportunity to buy. It will be in the next session or so whether we can ascertain if the overbought exuberance has been removed or whether there is more downside to come. With all the volatility of yesterday’s session forming a small bodied candlestick (along with huge upper and lower shadows), it is still too early to say. Daily MACD and Stochastics are falling, but interestingly, the RSI has begun to stabilise around 50 as the market has edged higher this morning. The importance of the old $1940 consolidation level is also growing, as a band of resistance $1940/$1949 has developed in the past 24 hours. As the market settles down and the bulls can begin to pull higher through this resistance, then the outlook will begin to improve once more. It is interesting to see the hourly RSI also still under 60, and for the bulls that needs to change. There is a reaction low at $1906 that now needs to hold too as support. 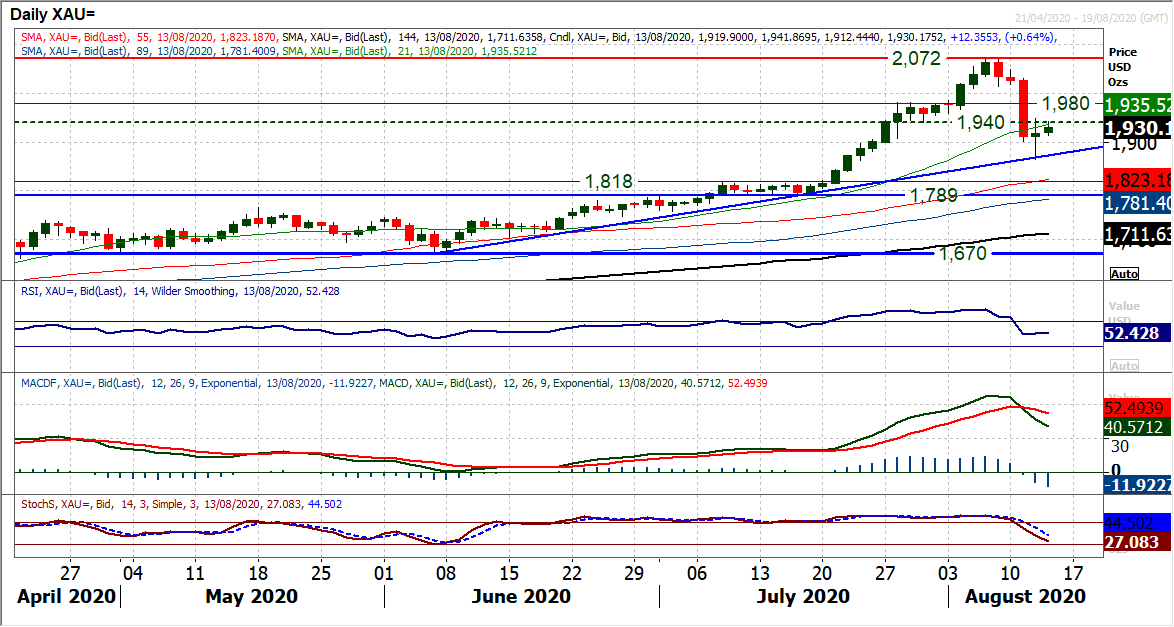 We still see the bulls willing to support weakness in oil, but struggling to really push the recovery forward. Despite this though, there has been a closing price above $45.20, which finally “closes” the bear gap at $45.20. Despite several intraday attempts to achieve this in the past week, the failure to close the gap has been a concern. But now the bulls can begin to cast their gaze higher and target resistance levels overhead. Brent closing this gap and closing at a multi-month high now means that there is very little resistance of note until into the $50s. The initial barrier of intraday highs of the past week, still needs to be overcome between $45.80/$46.25 but the next real resistance beyond this is not until $53.10/$53.80. We are still mindful of the tendency for false starts in the rally and look to use weakness as a chance to buy. The hourly chart shows $44.25/$44.40 as initial support. The low at $42.90 is of greater significance, whilst $41.30 is still key near term. 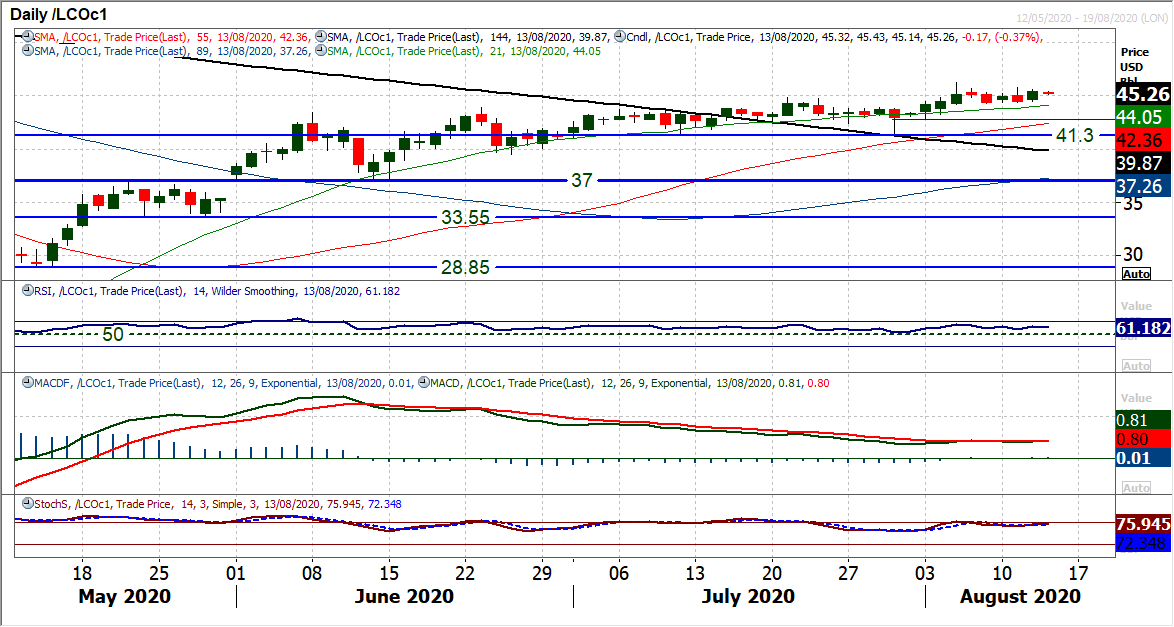 After Tuesday’s wobble, the bulls got back on track yesterday with a solid day of gains once more. With the breakout above the old June high of 27,580 the market has given the breakout a seal of approval, as it has used the break level as a basis of support. It now strengthens the importance of the band between 27,070 and 27,580 to be seen as a zone of underlying demand. Daily momentum remains strong, with the RSI consistently high 60s, Stochastics above 80, whilst MACD accelerate higher. Futures may be consolidating today, but the bulls will be eying a push above 28,155 (Tuesday’s high) whilst also looking to close February’s bear gap of 28,400/18,890. We look to use weakness as a chance to buy. The hourly chart shows support 27,580/27,625 initially. 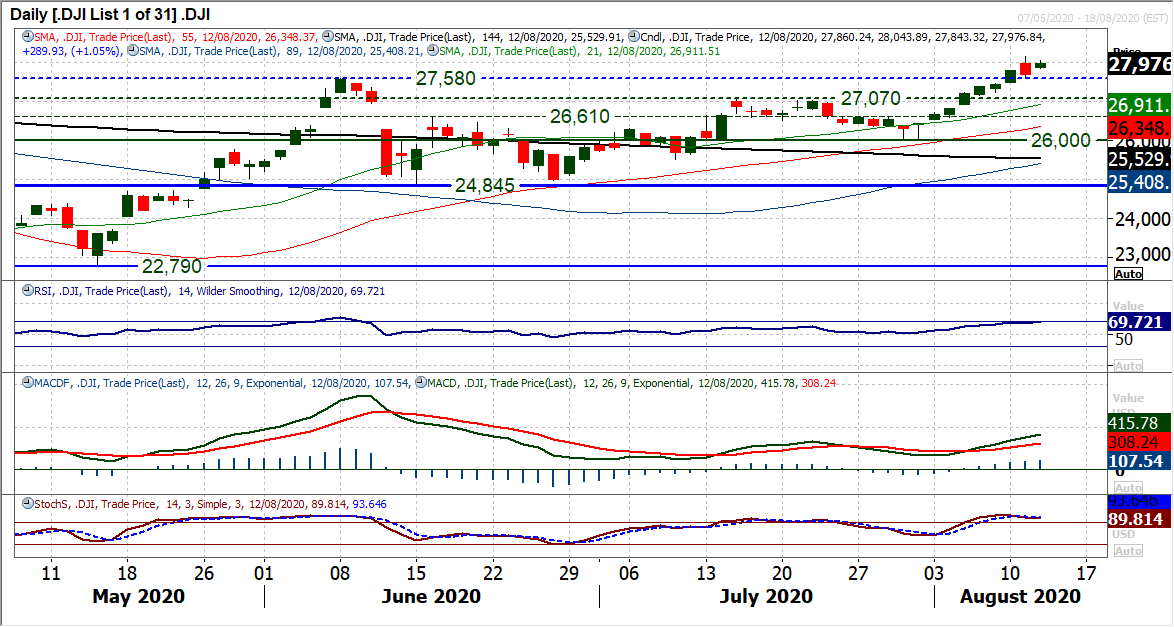