There seems to be no let up for the dollar as the trends of recent sessions continue to hold. This has become a story of renewed dollar weakness, with yields trending lower, gold strength and Wall Street breaking higher. The US COVID-19 infection rates may be showing signs of plateauing at least, but Congress is still unable to agree on a fiscal support package. Recent economic data announcements point to a deterioration once more in the labor market (employment components of both ISM Manufacturing and Non-Manufacturing, along with a miss on the ADP) suggest that we could see a negative surprise in the payrolls report tomorrow. Congress needs to deliver on fiscal support. Whilst the arguments continue, yields will remain under pressure and the dollar will slide. Gold is breaking ever higher into blue sky territory, but if Congress can deliver, then this would likely be a trigger for yields higher, a dollar rebound (albeit near term) and profit taking on gold. Early this morning, we have had the Bank of England announce monetary policy. No changes to its rates (at +0.10%) or asse purchases (at £745bn) which will run until around the “turn of the year”. The decisions were unanimous. What has moved sterling though is that whilst the study into negative interest rates continues, the indication is that the BoE has “other tools available” still. Sterling bulls seem to have taken this well. 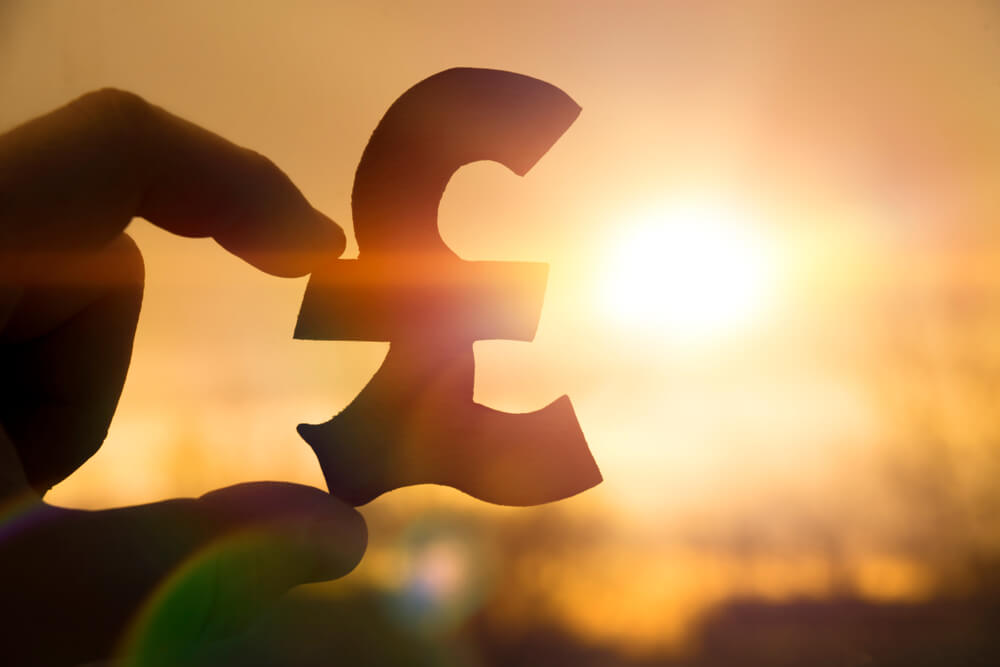 Wall Street closed again decisively higher, with the S&P 500 +0.6% at 3327, whilst futures are again looking higher (E-mini S&Ps +0.1%). Asian markets were somewhat muted overnight (Nikkei -0.4%, Shanghai Composite +0.1%). European markets are also slightly cautious, with DAX futures -0.1% and FTSE futures -0.6%. In forex, there is still an edge of dollar selling pressure still on, with GBP outperforming after the BoE. In commodities, gold is another +0.5% higher and silver continues to smash higher by another +2%. Oil is also continuing to hold is break higher, by around half a percent today.

With the Bank of England reporting early today, there is not too much on the calendar today. Sterling traders will still be digesting the BoE when the UK’s Construction PMI is released at 0930BST. It is expected to improve to 57.0 in July (from 55.3) although

It only accounts for around 8% of the economy so no significant impact is anticipated. Into the afternoon, Thursdays mean US Weekly Jobless Claims at 1330BST with claims expected to at least begin to stabilise around 1.41m (after last week’s 1.43m).

There are a couple of central bank speakers on the agenda. The Bank of England’s Governor Andrew Bailey has the monetary policy press conference at 1230BST. Furthermore, the FOMC’s Robert Kaplan (voter, centrist) speaks at 1500BST.

Charts reflecting the weakness of the dollar are everywhere right now and USD/CAD is no different. The pair has been trending lower with Canadian dollar outperformance pretty much since the March high. However, having spent the past seven weeks consolidating between 1.3310 and 1.3715, with renewed dollar selling pressure, a downside break of 1.3310 has taken the pair to its lowest since February. The implication of a close below 1.3310 is a target of -400 pips in the coming weeks. This should mean a full retracement to the December low at 1.2950 in due course. Momentum is bearishly configured across the indicators, but with downside potential too as the MACD lines bear kiss lower, whilst RSI and Stochastics falling decisively. The historical significance of breaking so decisively below 1.33 is also notable, as this has so often been a ley pivot area in moves dating back to late 2018. Subsequently it is now key resistance to sell into any near term strength, with a “sell zone” between 1.3310/1.3460. The downtrend of the past few months comes in at 1.3470 to add weight to the downside move. Initial support is at 1.3200 from the February lows, but then the way is open towards 1.2950. 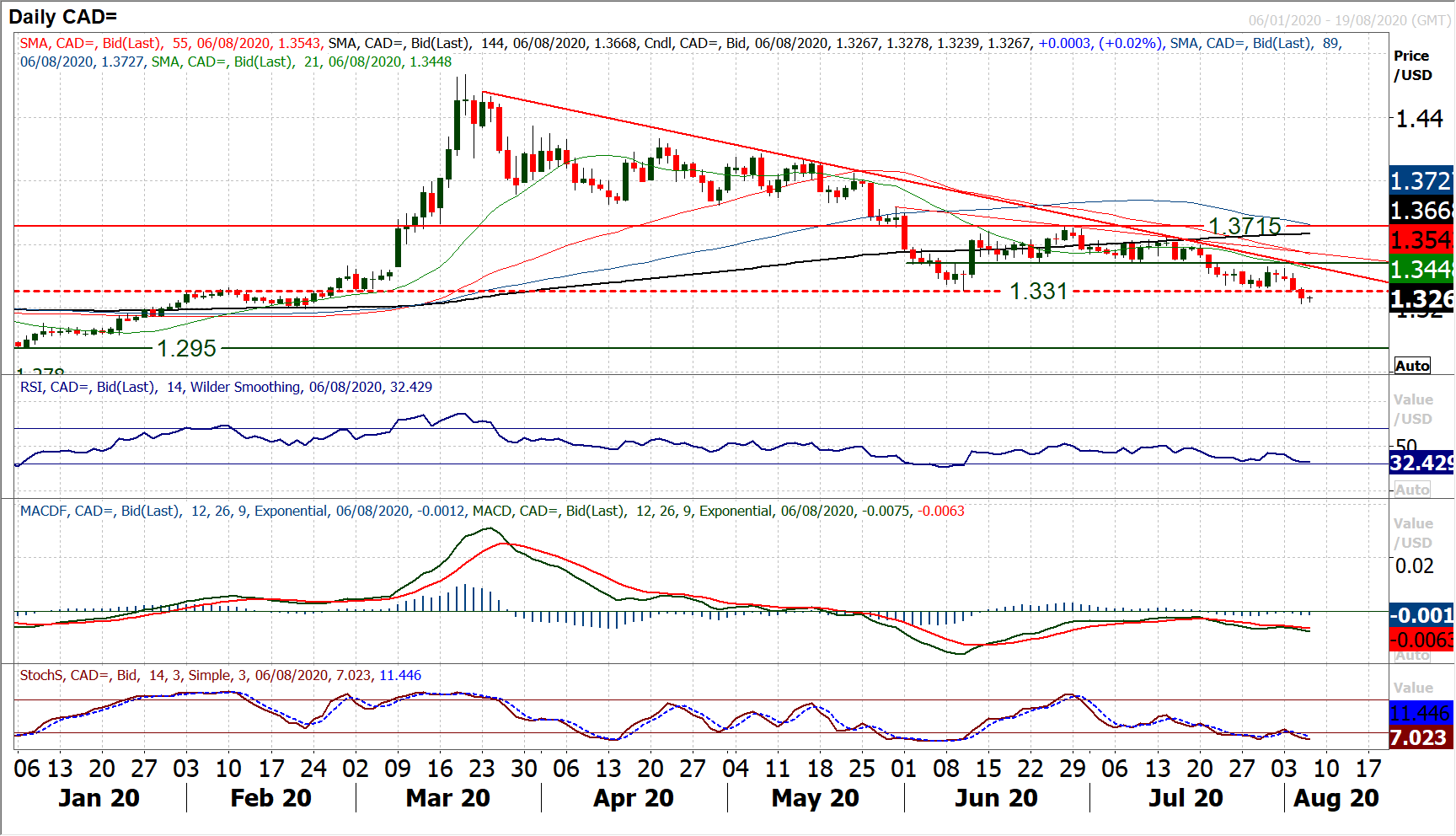 The bull move on EUR/USD is certainly impressive. Successive uptrends are becoming ever steeper and the market is looking to push through resistance. The question is whether the bulls will continue to run higher, or whether the move will begin to lose its way. For now, momentum indicators are not showing any real signs of reversal. There has been a strong reaction to a couple of negative candles, with RSI, Stochastics and MACD lines all picking up again in strong configuration. Support has formed at 1.1695 this week, and the market is testing the 1.1908 key high from last week. A closing breakout above 1.1908 would imply another +210 pips into the $1.20s. Given the size of the bull move and the stretched position on momentum, there needs to be a degree of caution still over chasing this market ever higher. We are still on the lookout for potential exhaustion signals which may time the profit-taking. For now though, the hourly chart remains positively configured. Initial support at 1.1800/1.1830. 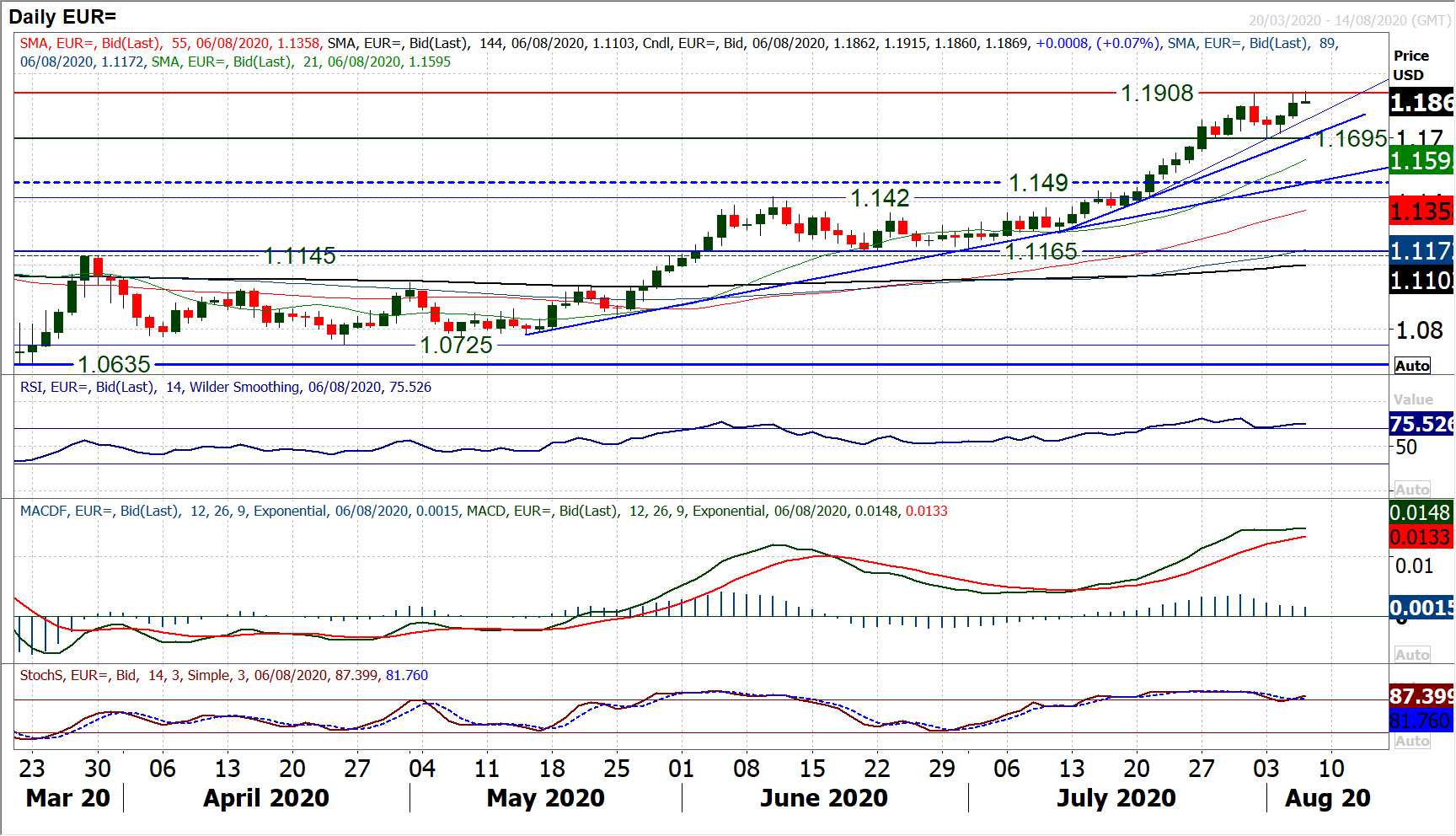 The initial market assessment is that sterling likes the Bank of England update. Seeing that “other tools are available” aside from negative interest rates is a boost. The chart of Cable shows that the market has begun to drive higher again. Around the turn of the weekend, there were three distinctly uncertain candlesticks, but yesterday’s gain of over +50 pips and further moves higher on the Bank of England early this morning, is now breaking the market above 1.3170 and eyeing the old key 1.3200 resistance. Momentum indicators are swinging higher once more in still strongly positive configuration. A decisive closing breakout above 1.3200 would be the next big step forward for Cable. Slightly re-aligning the recent uptrend lends support around 1.3070 today, whilst the hourly chart shows good initial support at 1.3110. 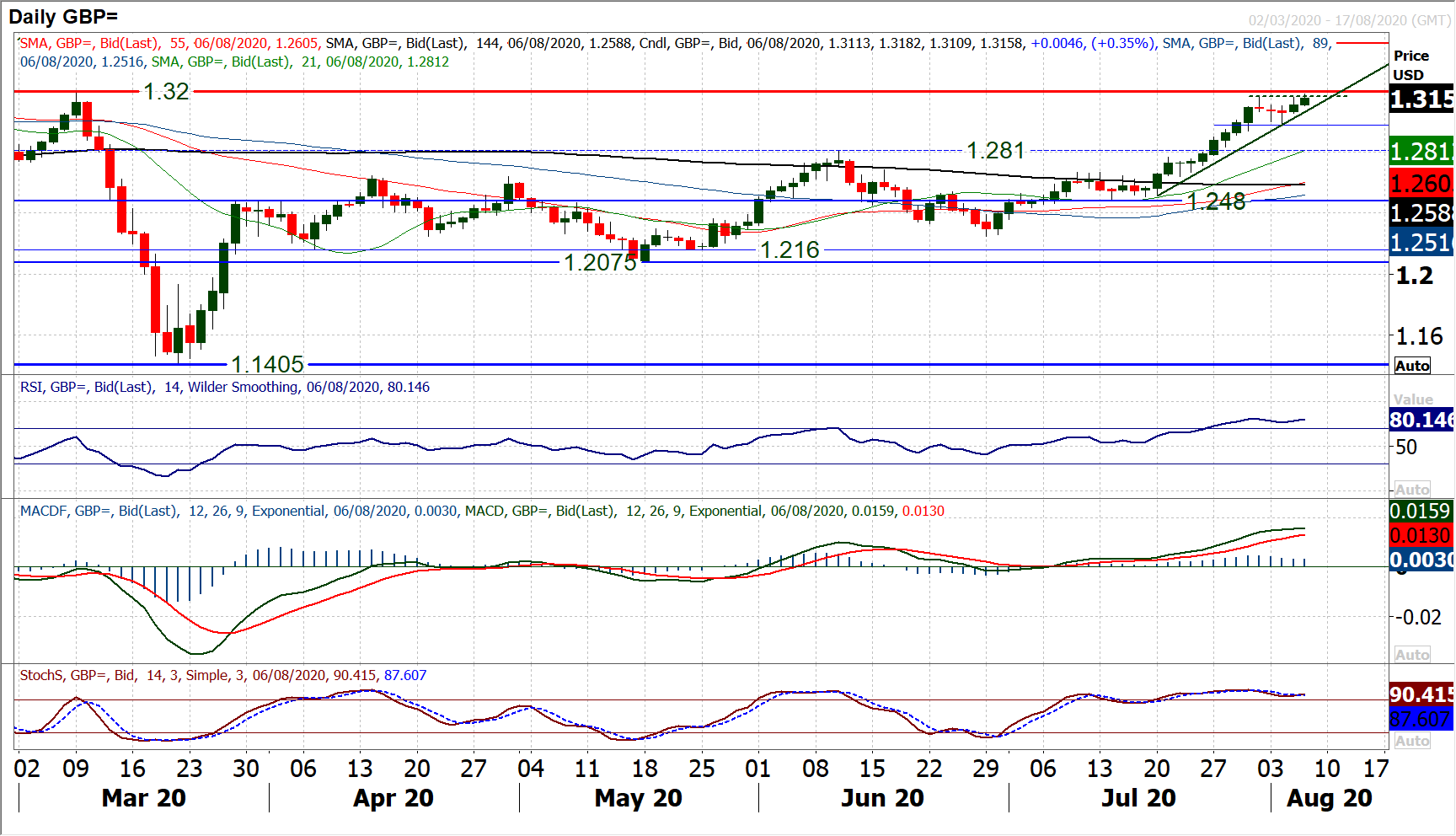 The dollar rally has petered out fairly meekly as the pair has completed two successive negative configuration candles. The early selling once more today shows that the downside pressure continues to mount. Momentum indicators are also already falling over, with RSI faltering under 40, a cross lower on Stochastics and MACD lines again waning. The key overhead resistance of 106.00/106.60 has played a decisive role in the supply of sellers. The hourly chart shows a break under 105.50/105.55 support to renew a run of lower highs and lower lows, leaving 105.90 as a  pivot and first lower high of note. Hourly indicators are increasingly correctively configured again, with hourly RSI faltering in the 50/60 area to suggest that even near term bounces are a chance to sell now. A break under the next support at 105.30 would add momentum to the developing negative move. If seen on a closing basis if would then open a retest of the recent low at 104.17. 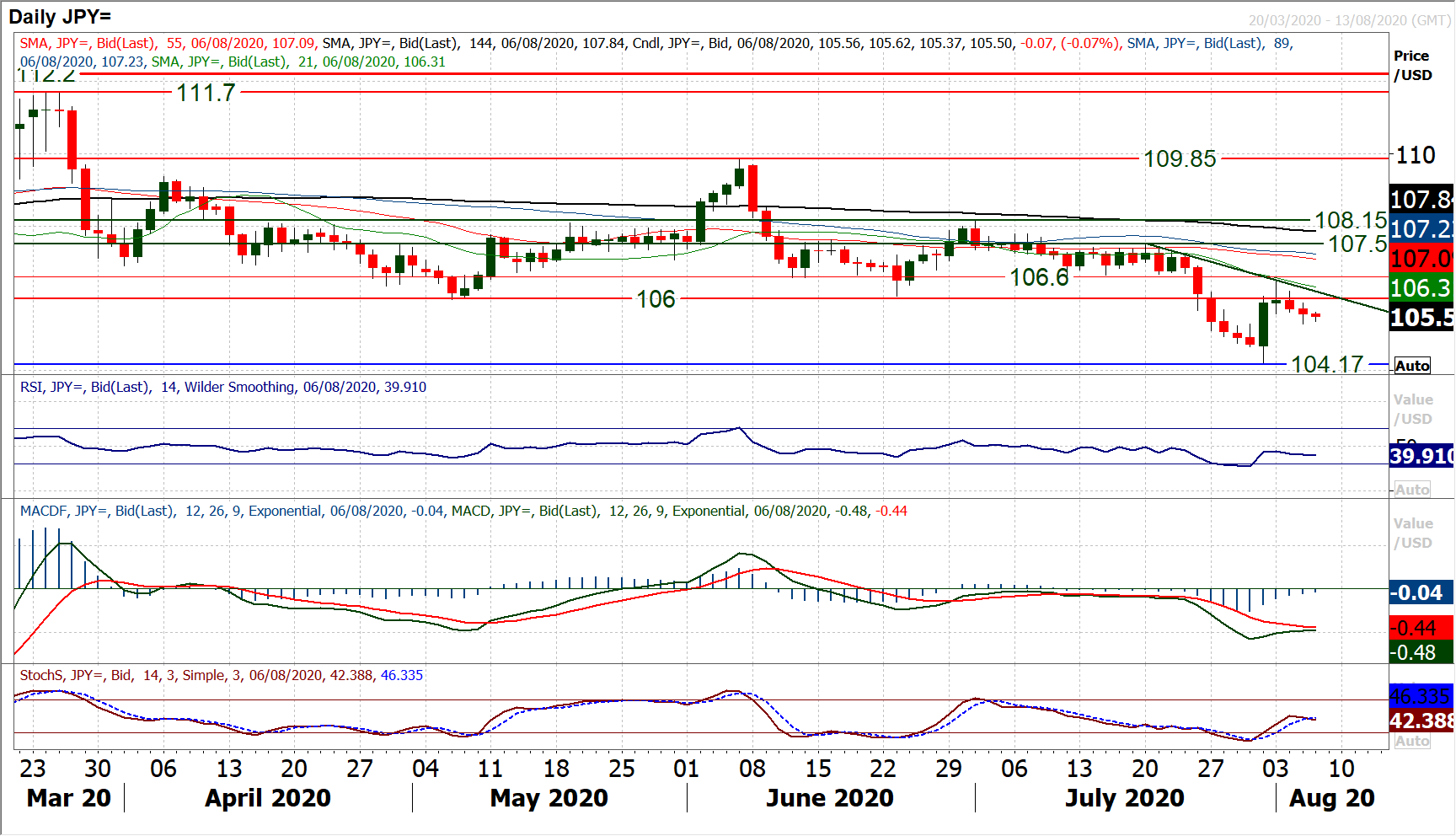 The bull train continues to power on. After Tuesday’s huge breakout above $2000, the market continued to buy yesterday and is buying today. There is no resistance up here, and with momentum so incredibly strong, there is nothing to really stop gold pulling ever higher. Or is there? Daily momentum is now more stretched than it has ever been, with the RSI above 89 this morning, at record levels. There are two ways to read into this, firstly one of enormous trend strength, but secondly an increasingly stretched market. It is difficult to say where this bull run will stop, but the fear would be that with gold having rallied so hard, so quickly, when a corrective move does set in, it could be sharp and painful if caught on the wrong side. So we have to be cautious with the move, especially as seemingly everyone is bullish now. Looking to the hourly chart, there is a near term pivot that has formed around $2029/$2030. The market is ticking again to test yesterday’s high of $2055, but $2029 could become an interesting gauge of support. We also note a small negative divergence on the hourly RSI too. Could this be a sign of slightly waning upside momentum? There is further support back at $2009. 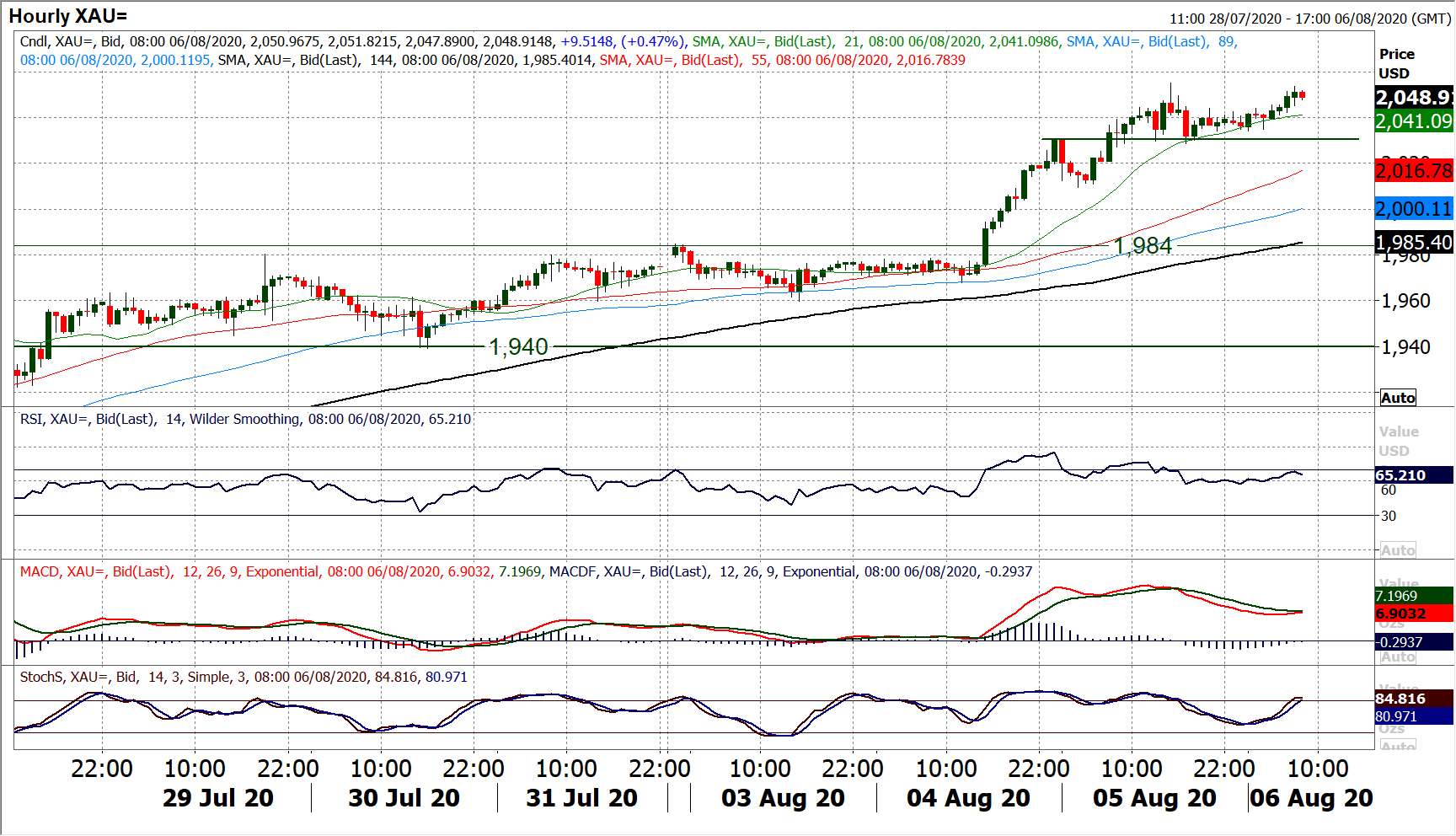 With another positive close on oil, finally a closing break above $44.90 to a new multi-month high. However, the bulls will be a tad disappointed that they could not quite “close” the old March bear gap at $45.20. Despite this, some upside traction is forming after several weeks of consolidation between $41.30/$44.90. The inference of this breakout is an implied target of +$3.60 towards $48.50 in the coming weeks. The move is being confirmed by strength through the RSI into the mid-60s, Stochastics moving into strong configuration, whilst even a bull cross on MACD lines is threatening. The bulls will note that now the $45.20 gap still needs to be closed though, but the market is again looking to pull forward today. Decisively clearing $45.20 would open initial resistance at $48.40, but the bulls can begin to have designs on re-engaging the recovery towards the $50s. The breakout above $44.90 leaves $41.30 now as a key medium term higher low and we would look to buy into weakness. Initial support is now $42.90/$43.95. 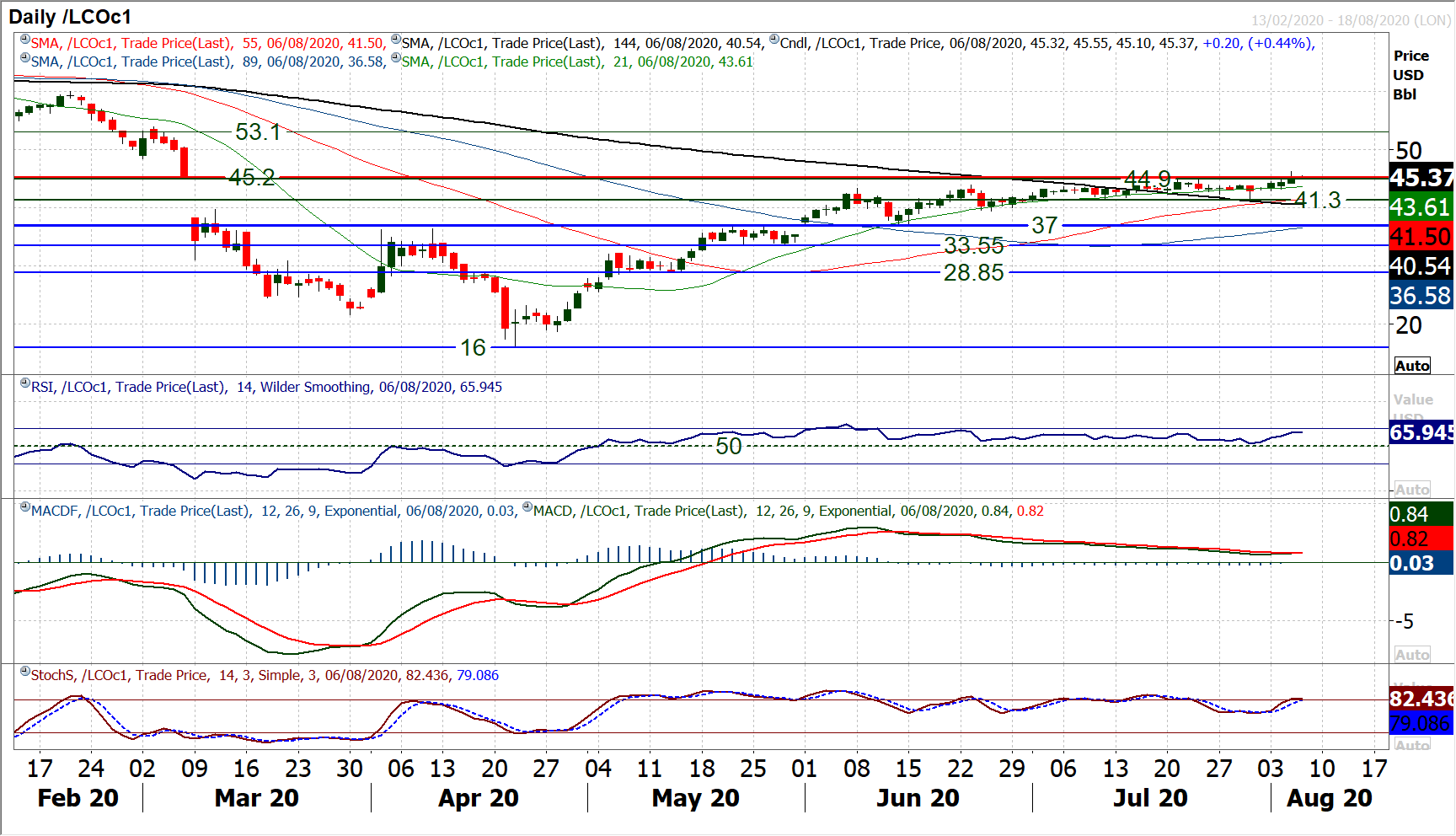 The upswing in the Dow is accelerating. The magnitude of the daily gains and daily candlesticks are increasing as the week progresses. Last night’s decisive close above 27,070 resistance (the old July high) now re-opens a test of the key June high of 27,580. It comes with momentum indicators now moving decisively once more, with the Stochastics accelerating higher, RSI into the 60s and confirming the near term breakout whilst MACD lines are also now crossing higher. Another gap has been left at yesterday’s open, at 26,832, but this does not appear to be a phase for filling gaps (similar to the mid-May to June rally). If there is a near term pullback, the bulls will certainly look to use the band between the old pivot at 26,610 and the breakout support at 27,070 as an area for the next higher low in the recovery. Above 27,580 opens for the old February breakaway bear gap at 28,890, whilst the all-time high of 29,569 is also possible. Leaving key higher low support around 26,000 becomes key now. 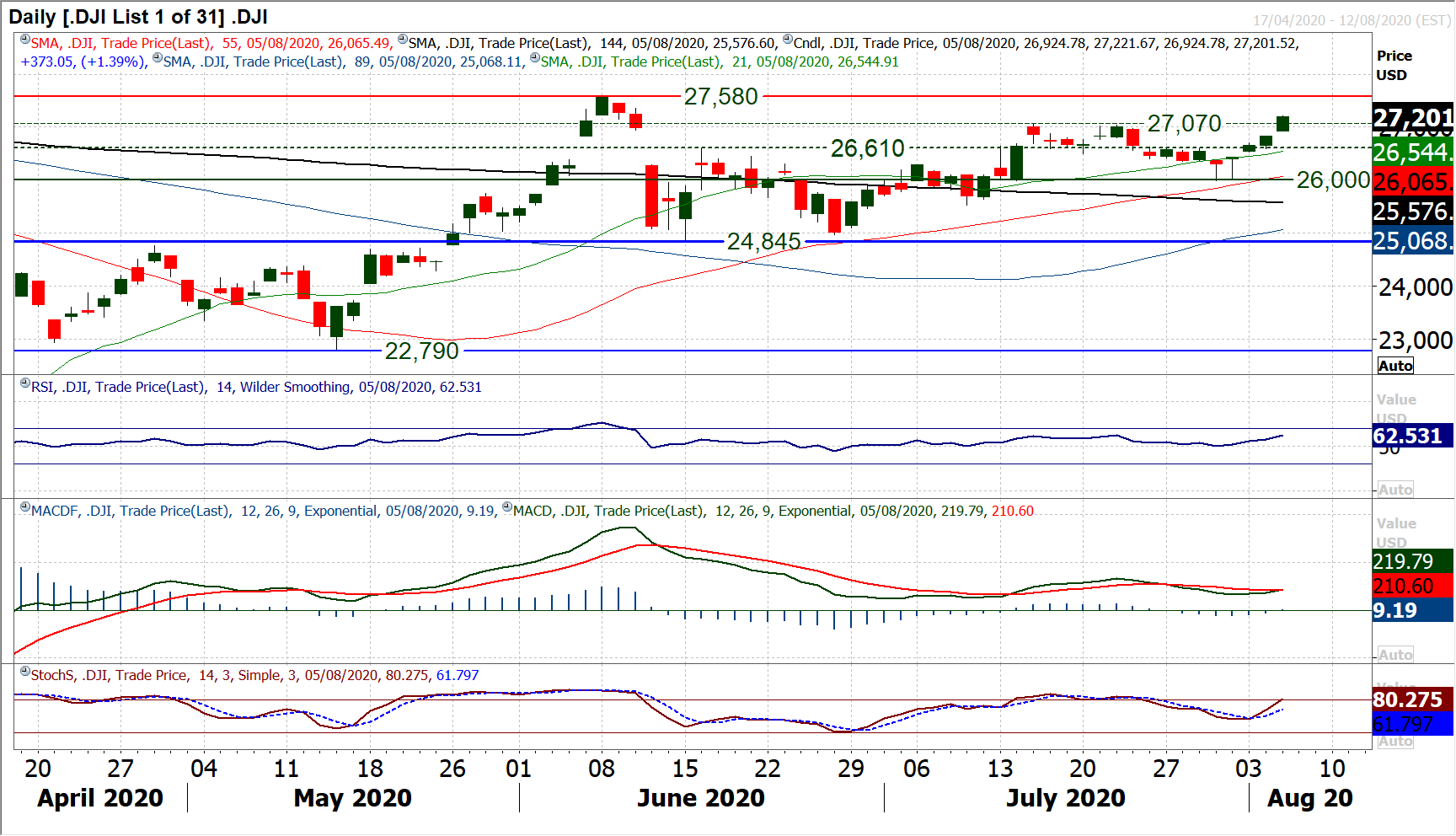