There has been a dramatic shift in sentiment early this week as risk appetite has taken a huge step back. Markets are reacting to the perception that Europe is having to deal with significant second wave COVID infections with renewed restrictions. This comes at a time where Congress continues to drag its feet over a US fiscal support package. Also we can add into this, a big money laundering scandal hitting the banking sector, just for good measure. This all adds up to a shift into safe haven forex, and equities being sold off sharply. The dollar tends to benefit in times of elevated market fear, and this is no exception. The rebound in the Dollar Index is now testing the key resistance band 93.50/94.00, something that equates to the support around $1.17 on EUR/USD. With dollar strength and concerns over the demand outlook hit the commodities complex with oil and silver sharply lower. What was also interesting was a return to strong selling on gold, apparently not a safe haven of choice right now. Back in March when equities were selling hard, gold was also sold amidst portfolio liquidation. This is something to keep an eye on in the coming days if equities continue to decline. The next few days will also be focused on Fed chair Powell, who testifies before Congress on. 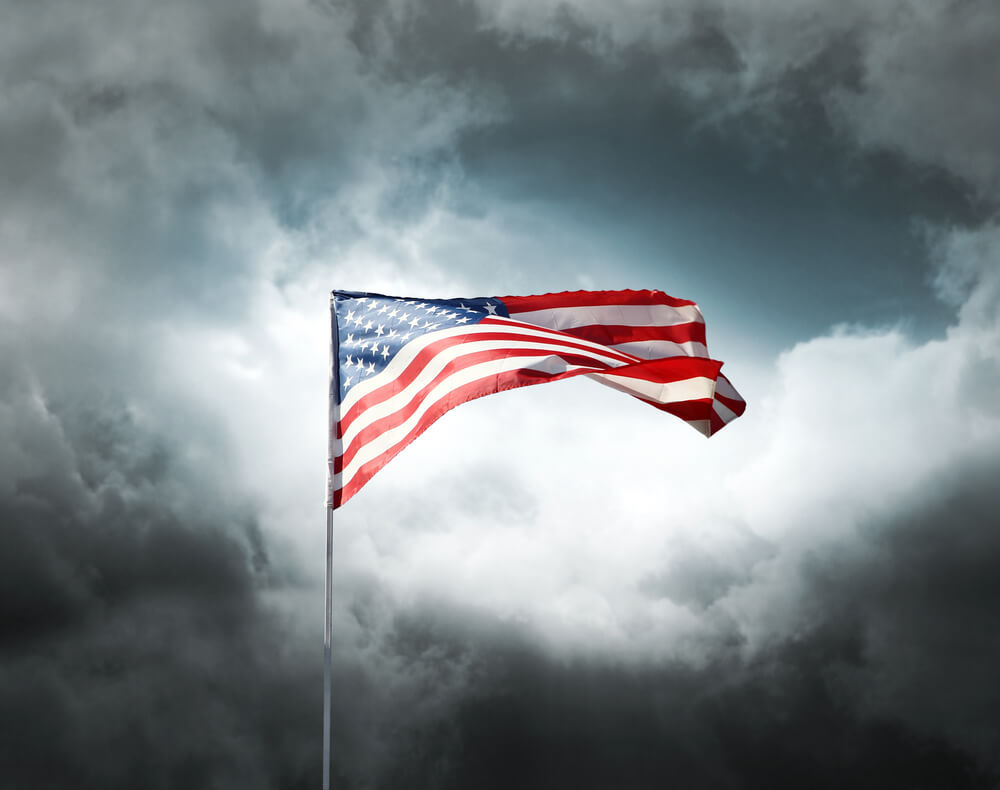 Wall Street closed with decisive losses last night, but interestingly a late tech rebound saw markets off session lows. The S&P 500 was -1.1% at 3281, but US futures are again lower today, with the E-mini S&Ps -0.4%. Asian markets were lower, with the Shanghai Composite -1.3% (Nikkei again closed for public holiday). European markets look relatively supported this morning as they react to the late US bounce, with FTSE futures +0.4% and DAX futures +0.6%. Can this last though? In forex, the risk negative outlook continues, with USD strong against everything aside from a relative outperforming JPY. In commodities we still see silver (-2.4%) under mounting selling pressure and gold (-0.4%) also lower again. Oil is only ticking marginally lower in early moves.

There are two central bank chiefs to look out for today. First up is the Bank of England Governor Andrew Bailey who is speaking at 0830BST. The big focus will though be on Fed chair Jerome Powell who testifies before the House Financial Services Committee at 1530BST about the CARES Act. Any further clarity on Fed policy could drive volatility.

There was a dramatic shift out of higher risk assets and into safety yesterday. This resulted in the US dollar strengthening across major currencies and weighing on AUD/USD. The question is whether the deterioration in the outlook is a game changer. It is not yet, but the risk is growing as key support at 0.7240 was broken yesterday. This was where a key three month uptrend crossed with old breakout support. A decisive negative candlestick through 0.7240 suggests an acceleration in momentum of selling pressure now. A close below support at 0.7190 (the September low) would mark a decisive shift to confirm a corrective outlook now. This move is already coming through momentum indicators, with the RSI falling at its lowest since April, whilst MACD and Stochastics lines accelerate lower. Below 0.7190 opens 0.7135 initially, but a retreat to the more important pivot at 0.7060 comes back into play. It would also turn the outlook to one of lower highs and lower lows, the basis for a new corrective downtrend. The breakdown of 0.7240 now becomes a basis of resistance today, but another bull failure under the 21 day moving average (today at 0.7280) to form another lower high below 0.7345 would add to a growing downside move. 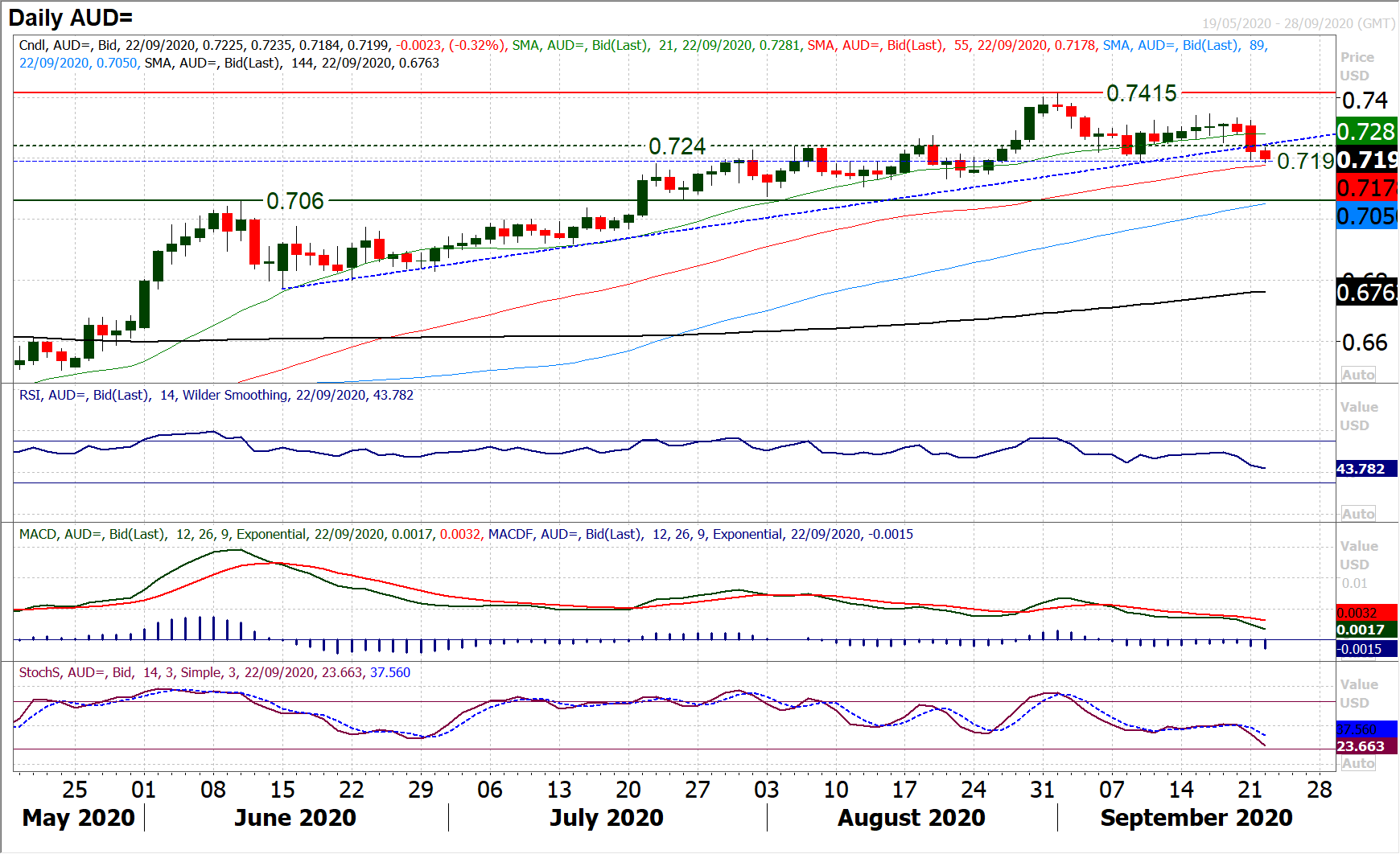 When EUR/USD breached the four month uptrend so decisively last week, the suggestion was that the bulls were struggling. Yesterday’s decisive sharp negative candle (with a -75 pip downside move) confirms that this is an ongoing range between 1.1695/1.2010. There is also now a growing threat within this range that there would be a downside break. For eight weeks there has been a deterioration in the RSI, peaking at lower levels and turning increasingly corrective. Now decisively below 50 and the lowest since May, along with corrective MACD and Stochastics, the pressure is mounting on 1.1695/1.1750 key support band. The support of 1.1750 has had a couple of intraday breaches now without a closing break. However early downside again today is threatening again and a close below 1.1750 would be a five week low. A close under 1.1695 would complete a big top pattern and imply around -300 pips of downside. The hourly chart shows initial resistance 1.1775/1.1800 area now which is a barrier to a recovery. A failure to reclaim this lost ground will simply increase the growing pressure on the key medium term support band 1.1695/1.1750. 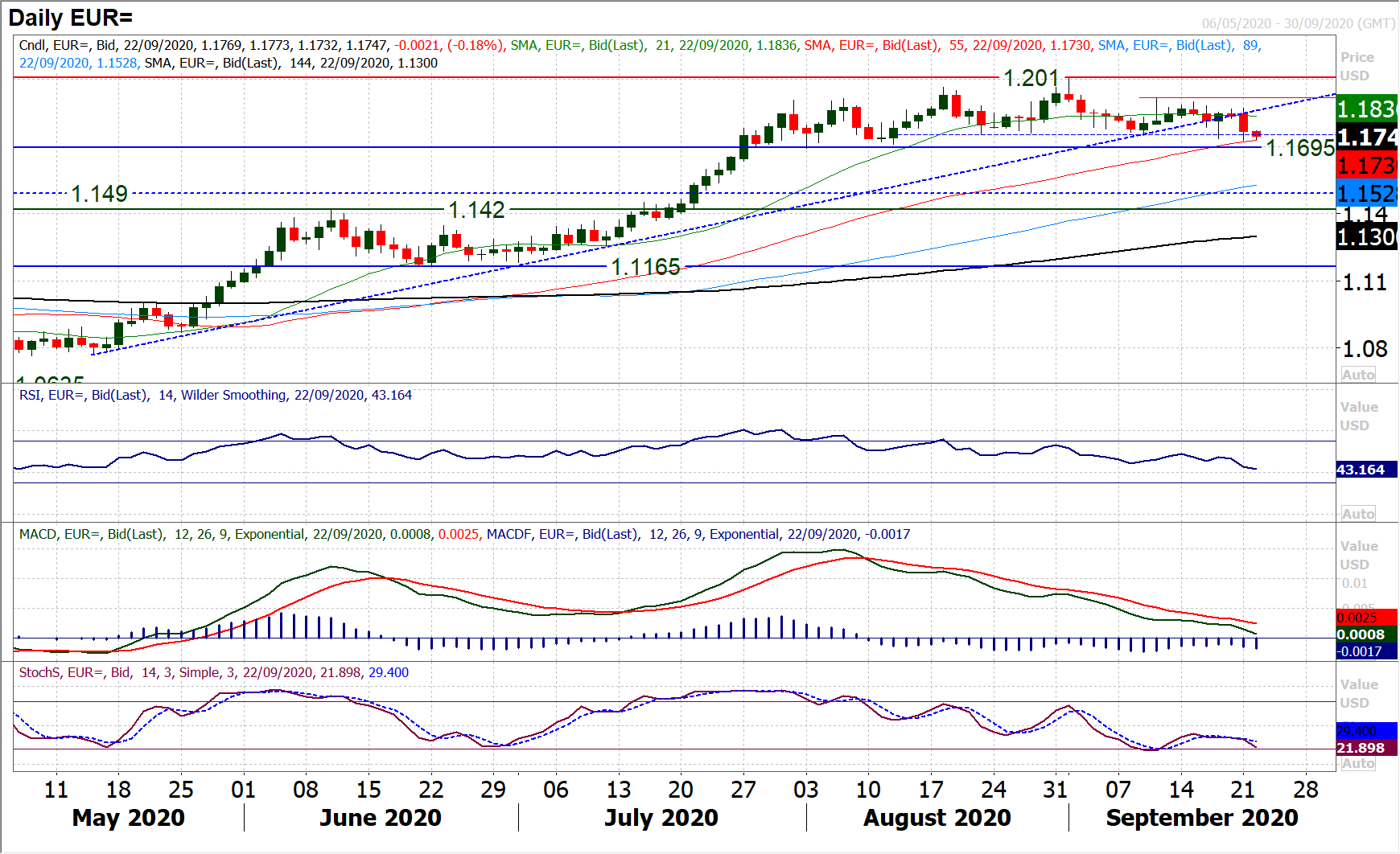 The technical rally has been faltering around 1.3000 in recent days as the overhead supply between 1.2980/1.3050 has been a barrier to recovery. Yesterday’s sharp retreat once more reflects the lost control of the Cable bulls and the market is on the brink of turning decisively corrective now. The support that formed at 1.2760 is key because if there is a closing breach, it would signal 1.3005 being a key lower high as part of a new technical downtrend. It would open 1.2650 initially as the next key test, being the bottom of the old breakout levels of the old April to July ceiling. A failure of this support would open a much deeper correction, towards 1.2480 and possibly 1.2250. So how the market resolves this little 1.2760/1.3005 range will be key. Today’s early slip lower threatens the support. Looking at daily momentum indicators turning increasingly negative (RSI failing at 50, Stochastics bear cross and MACD falling under neutral) the risk is certainly to the downside now.  A closing break confirms. The hourly chart shows a decisive move above 1.2860 is needed to improve now. 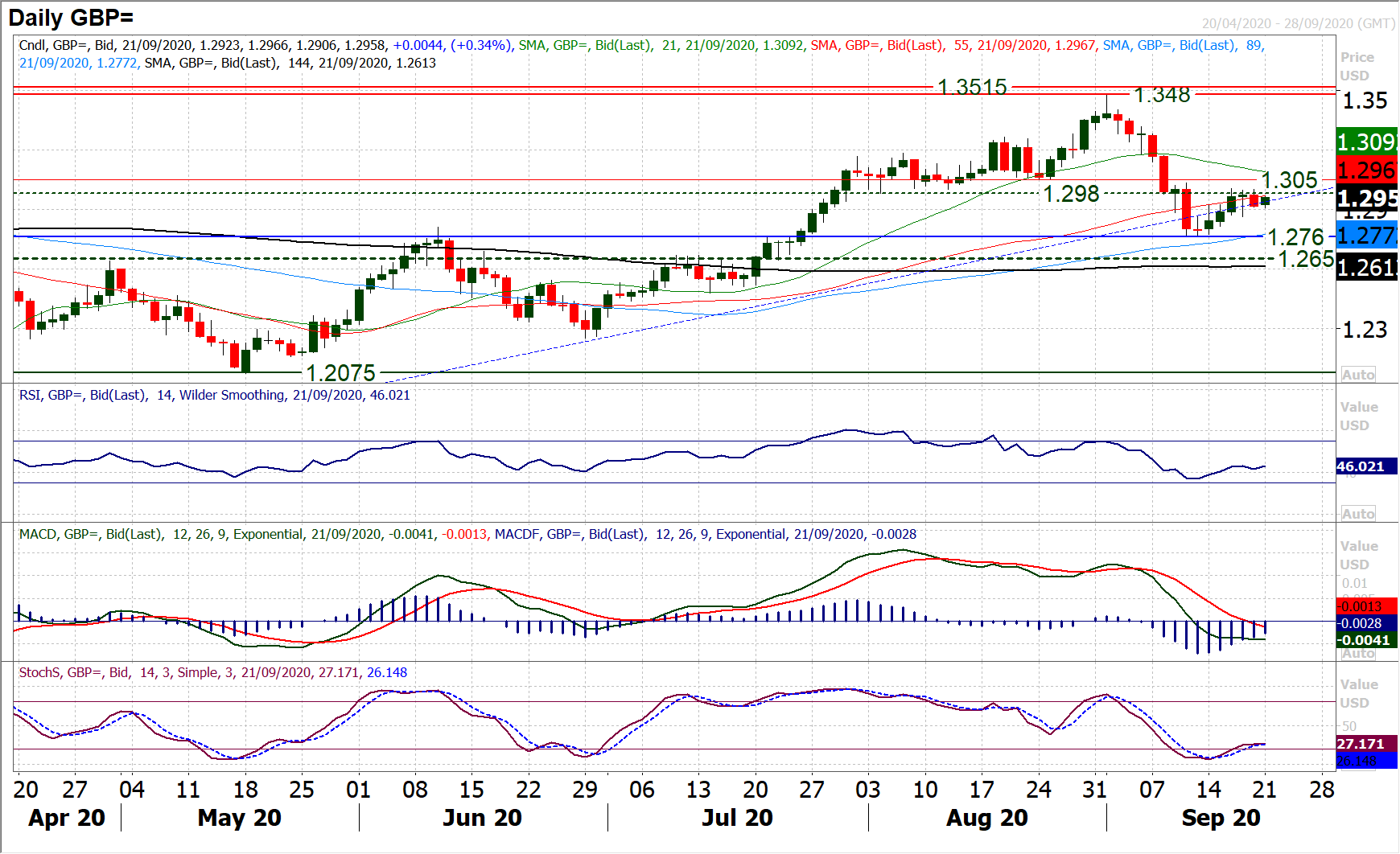 A remarkable intraday turnaround on Dollar/Yen drove a rebound which could now begin to trigger a recovery. After initially breaching 104.15 support, the hourly chart shows a sudden +80 pip rebound which has broken a technical bearish sequence of lower highs and lays the foundations for recovery. How the bulls respond today will be key as to whether this is something more than initial BoJ intervention, or a brief short squeeze. Resistance at 104.85 on the hourly chart looks to be key now as a close above here would complete a near term base pattern. Two positive daily candles in a row would improve too. Resistance is then at 105.10/105.30 (old August lows). Building support above 104.00/104.15 is now key too. 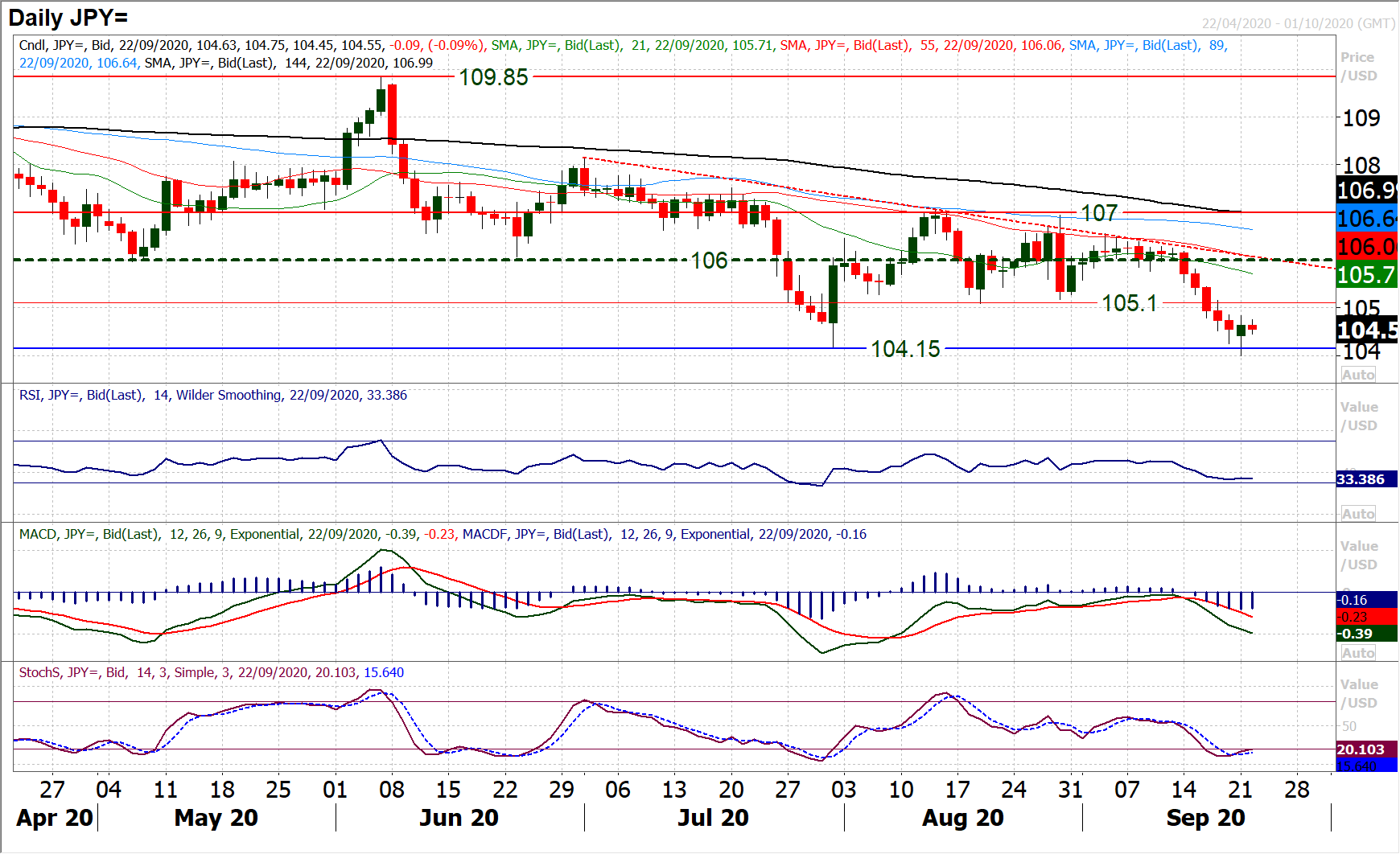 Gold consolidation turned into sharp correction yesterday as everything linked to the dollar took a hit. Keeping in mind the Average True Range of gold is currently $28, a level that has not even been reached in the past two weeks, this was a sudden but sharp decline on gold. Technically it is also a key shift in sentiment. The consolidation between $1902/$2015 has been broken by an intraday drop to $1882. This may not has been sustained into the close, but there is a decisive deterioration in momentum now and downside pressure is growing. We have talked previously about the continual closing levels above the 23.6% Fib (of $1451/$2072) at $1926. This was decisively broken yesterday. Initial selling pressure today is adding to the growing negative move. A close below $1902 would be confirmation of a new corrective phase. Initially this would open $1863 as the next test, but given the lack of real support until $1817, along with the 38.2% Fib at $1835, a much deeper correction could be seen. Momentum indicators are confirming the deterioration, with RSI falling at its lowest since March, Stochastics falling with downside potential and a “bear kiss” on MACD. The near term technical outlook is turning negative for a move back into the mid-$1800s, how the medium to longer term bulls then respond will be key. 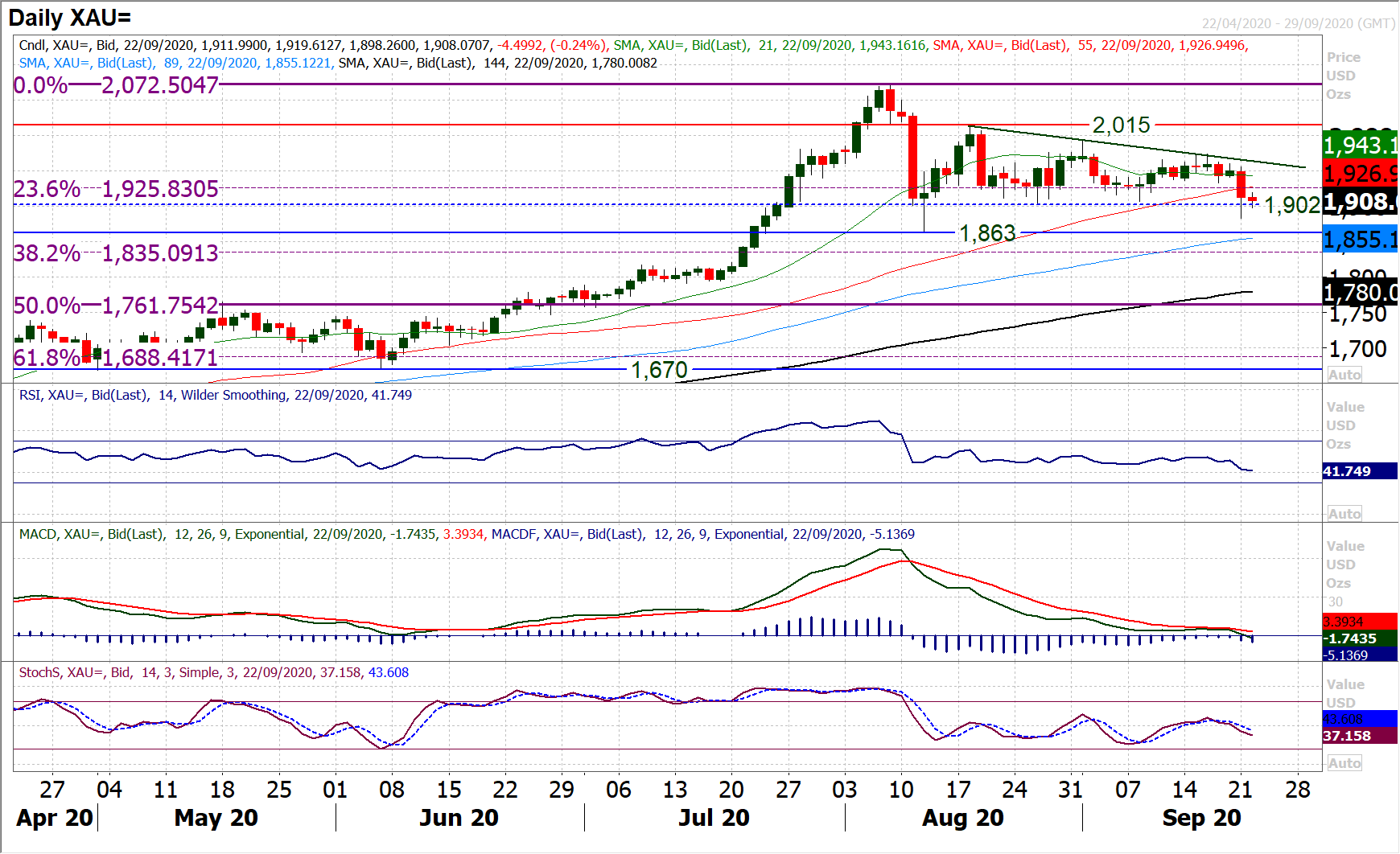 The dull trading days of July and August are long gone, replaced with the volatility of September. Hurricane season in full swing and second waves of COVID means assessment of oil supply and demand fluctuating and an oil price flying around. The sharp rebound of last week turned sour yesterday with a -4% decline. Interestingly, for the bulls holding on to the old floor of $41.30 into the close last night kept on track their improvement, just. However, this could only be temporary as another negative session is threatening today and with a close back below $41.00/$41.30 support the bulls would be losing control again and the risk would be for pressure on the key near term support at $39.30. Resistance at $43.60 is growing, whilst the hourly chart shows initial resistance $42.00/$42.50. 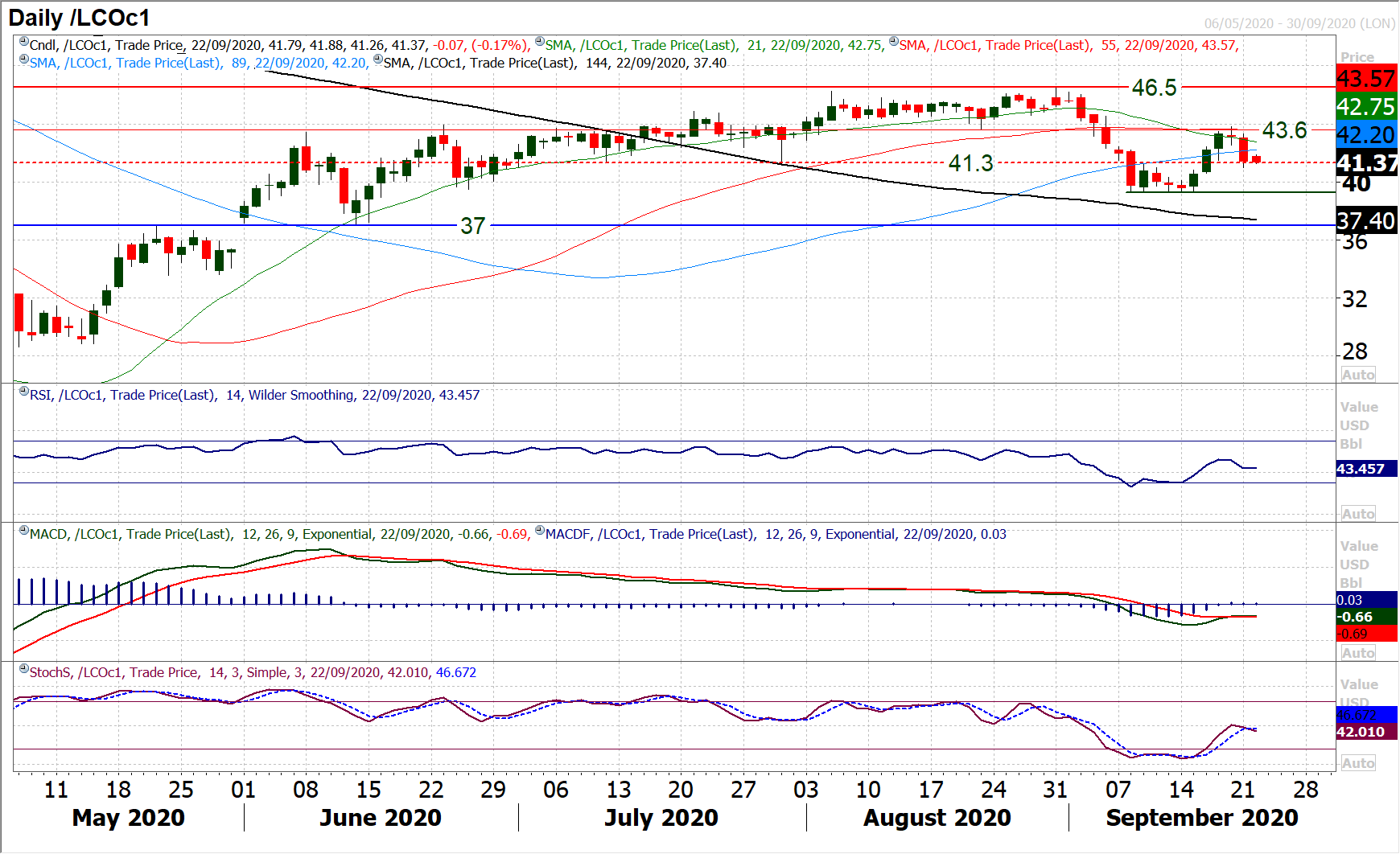 A big head and shoulders top pattern has formed on the Dow. The decisive close below 27,445 support has completed the pattern which now risks around -1750 ticks of downside in the coming weeks. It means that a retreat to the late July low of 25,990 is likely. Momentum indicators have been deteriorating in recent weeks and the daily RSI falling to its lowest since March reflects the growing retreat. The near term outlook is clouded slightly by the intraday rebound of around +430 ticks (c. +1.5%) off session lows of 26,715. The initial sharp move down has already driven a response from the bulls, but they need to go much further to break above the neckline resistance at 27,445/27,580. A failed rebound under this neckline would simply be seen as another chance to sell. 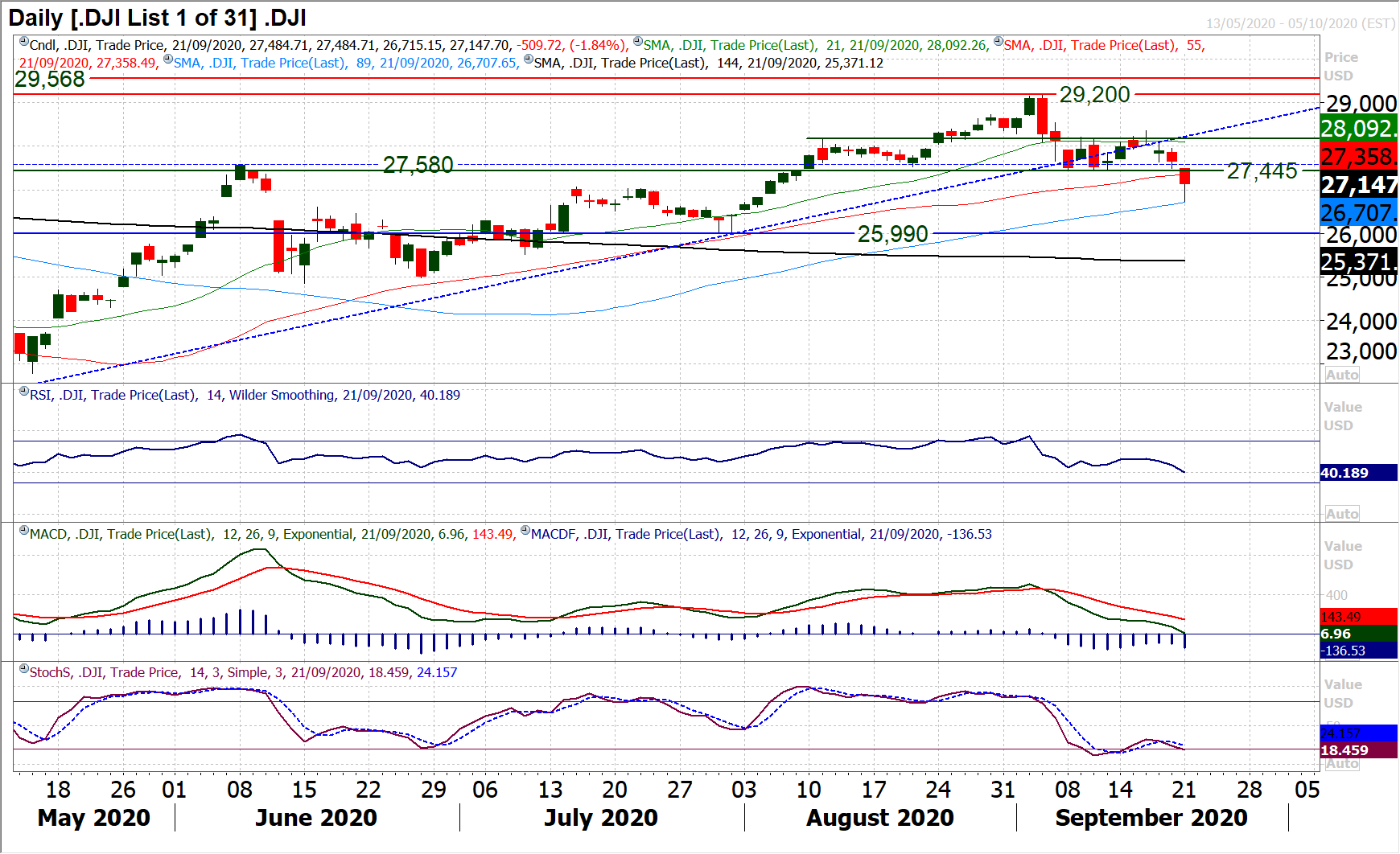