The dollar remains under pressure as the dovish implications of Fed chair Powell’s Jackson Hole speech continue to weigh. This has been exacerbated by comments from vice Fed chair Richard Clarida regarding yield curve control still being in the Fed’s toolkit. This has flattened the yield curve once more. In addition, this morning there has been an encouraging set of China PMIs (the Caixin Manufacturing beating estimates) which has helped to stoke risk positive sentiment. The impact is being seen across forex major pairs and asset classes. Breakouts to multi-year highs on EUR/USD, Cable, the Aussie and Kiwi are all being seen, whilst USD/CAD has traded below 1.3000. The Chinese yuan also continues to strengthen to levels not seen since May 2019 with USD/CNH moving below 6.82/6.84 support. The precious metals commodities are also pulling decisively higher once more, with good gains on gold and silver. It is a mixed bag today with equities, though, with DAX and FTSE struggling against there respective relative strengthening of the euro and sterling versus the dollar. Watch out for the manufacturing PMIs today which could generate some volatility later this morning. In an announcement overnight, the Reserve Bank of Australia as expected held interest rates steady at +0.25% and kept the 3 year yield target at +0.25%. 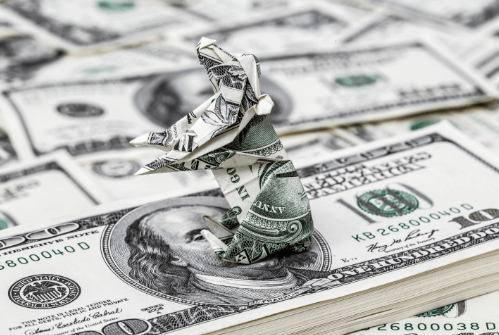 Wall Street closed slightly lower last night as the S&P 500 was -0.2% at 3500. However, futures are taking back these minor losses early today, with the E-mini S&Ps +0.2%. In Asia, there was a cautious picture, with Nikkei and Shanghai Composite almost dead flat. European indices look mixed today, with FTSE futures slightly lower -0.1% but DAX futures higher by +0.7%. In forex, the broad USD weakening continues, with the dollar around three to four tenths of a percent weaker across the board. In commodities, gold is +0.8% with silver +1.5%, whilst oil has bounced back by +1% early today.

A recent phase of consolidation has been used as an opportunity to renew upside potential and is beginning to once again be resolved with the bulls once more in the driving seat. After the huge run higher of late July, a choppy phase of trading in August has formed an uptrend (of the past six weeks). We look to use weakness as a chance to buy now, with the six week uptrend at $27.20 today, along with the rising 21 day moving average again a key basis of support (today also at $27.20). The market is moving decisively higher in the wake of Powell’s dovish Jackson Hole speech. This morning’s breakout above the initial lower reaction high of $28.44 is another key indication of growing bull control. Momentum indicators are confirming the move, with RSI back above 60 and Stochastics already at three week highs. A closing move above $28.44 re-opens the multi-year high of $29.84 once more. Initial support is now $27.90/28.44, whilst the support at $26.05 is increasingly important now on a medium term basis. 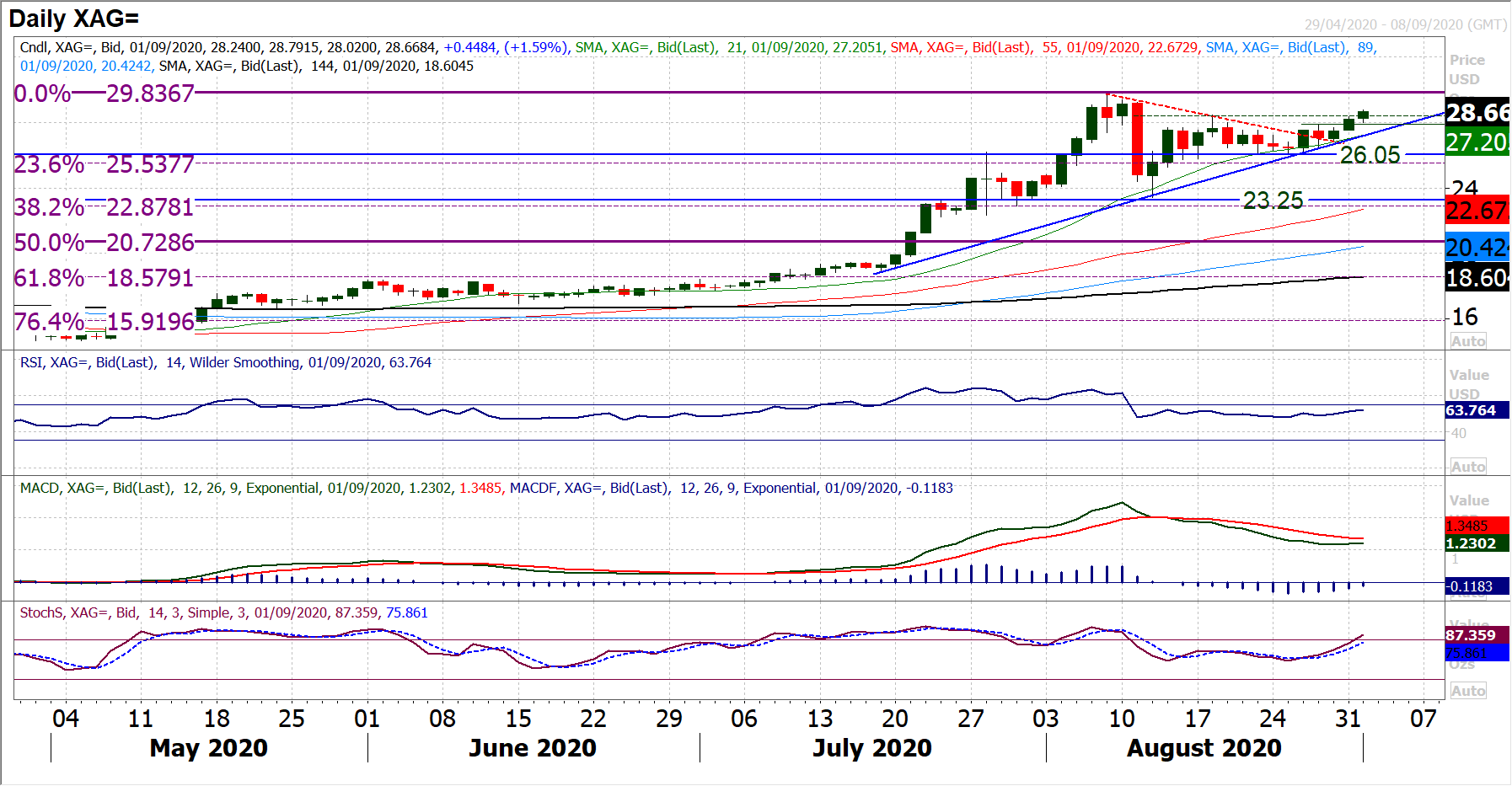 The dollar is under mounting pressure and this is helping to drive EUR/USD higher once more. A breakout this morning above 1.1965 is a key move to new multi-year highs again (highest since May 2018) in a move that opens 1.2000. The key will now be how the bulls respond. The last time that the pair broke out (mid-August) there was an instant retracement and anyone chasing the breakout would have suffered. Given the configuration on technical studies right now, this is a decisive positive move, backed by momentum. However, reaction around the key psychological 1.2000 area will be important too as this will be a big line in the sand for many traders. Holding a closing break above 1.2000 would be an important next step in the rally as there is little real resistance until 1.2150. The support at 1.1695/1.1750 is now key on a medium term basis. The hourly chart shows a good area of intraday support now 1.1920/1.1965 to buy into intraday weakness now.

The dollar is getting hit hard right now and Cable is driving to levels not seen since December and the reaction to the UK General Election. A spike high of 1.3515 was quickly retraced but if this can be overcome, then Cable will be trading at its highest since May 2018. Technicals are all increasingly strong once more, with an acceleration higher on Stochastics, RSI and also now MACD lines rising off a bull cross. There are no signs of negative divergences, so this looks to be a move that is being backed now, with a strong trend, Therefore, with the RSI moving above 70, this looks to be a strong move. We look to use intraday weakness as a chance to buy, with 1.3359 being a good line of initial support above a six day uptrend around 1.3280 above the 1.3265 breakout. 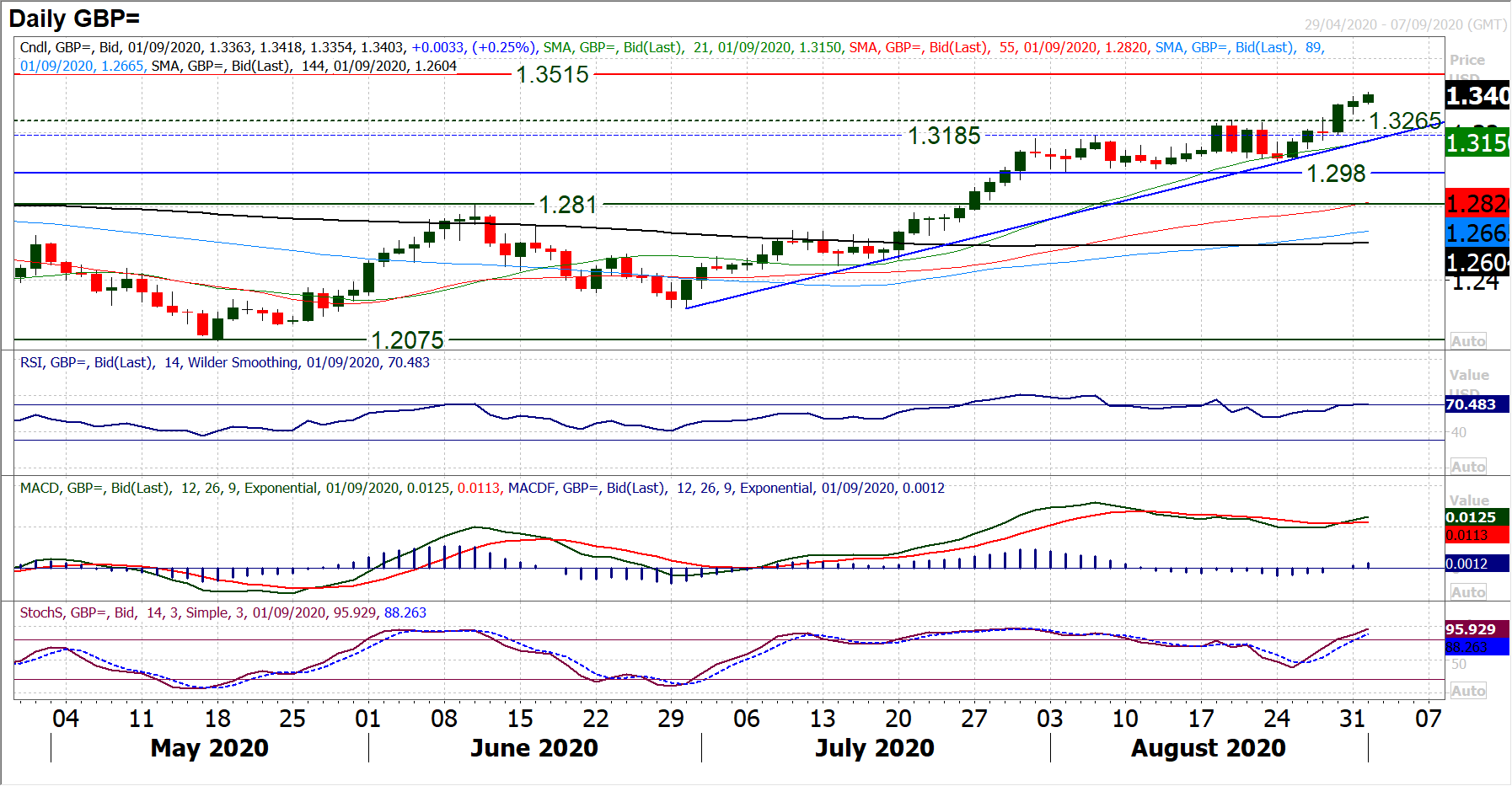 With volatility on Treasury yields cranked up in the wake of Jackson Hole, Dollar/Yen has been flying around and is yet to really settle. Friday’s huge bear candle looked to have put the sellers in control, but a bounce-back session yesterday has again left the market in a state of uncertainty (the fourth session in a row that has contradicted the previous). Throughout it all, the old 106.00 level still seems to be prevalent and the basis of a pivot around which the market is trading. Either through daily opens, closes or Friday’s “belt hold line” (mid-point of a strong session). It means that the market still sees 106.00 as a key pivot area. It is a basis of resistance today. Given the continues trend lower and tendency for rallies to fail between 106/107, we still prefer to sell into strength for continued pressure on 105.10/105.30. This is an area which has been the support for several lows throughout August. There is effectively, a near term trading band 105.10/107.00 now, but with a mild negative bias still to momentum, we favour a test of the support. 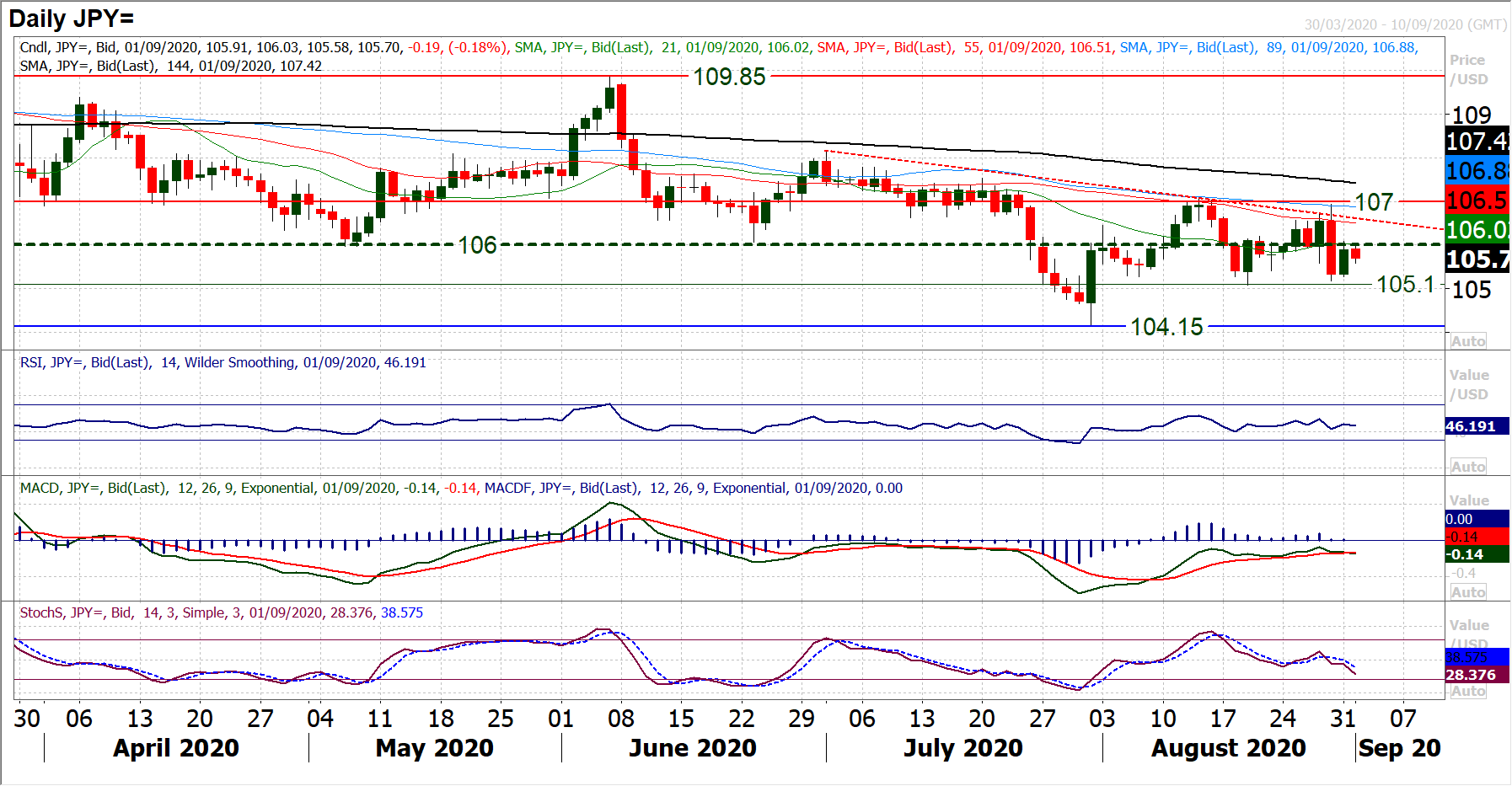 As the dust has begun to settle from Jerome Powell’s Jackson Hole speech, there is a drive to pull gold higher once more. Near term pressure on $1975 has broken to the upside this morning and gold is now trading at near two week highs. During the August consolidation, there were some important technically positive chart developments. Holding the long 12 week uptrend, closing consistently above the 23.6% Fibonacci retracement (of $1451/$2072) at $1926 were key bullish factors. Now breaking the corrective three week downtrend, swings the market bullish once more. We look to use near term weakness now as a chance to buy for pressure on $2015. The reaction around $2015 resistance will be the next step for the bulls to consider, although a close above the psychological $2000 would add to the improving outlook once more. The hourly chart shows the importance of the near term breakout above $1955 which is now a small base pattern implying $2000/$2010 as a target area. The strength is added to by a pullback which found support almost to the buck at the $1955 breakout yesterday. Today we see an initial support area $1965/$1976 forming. 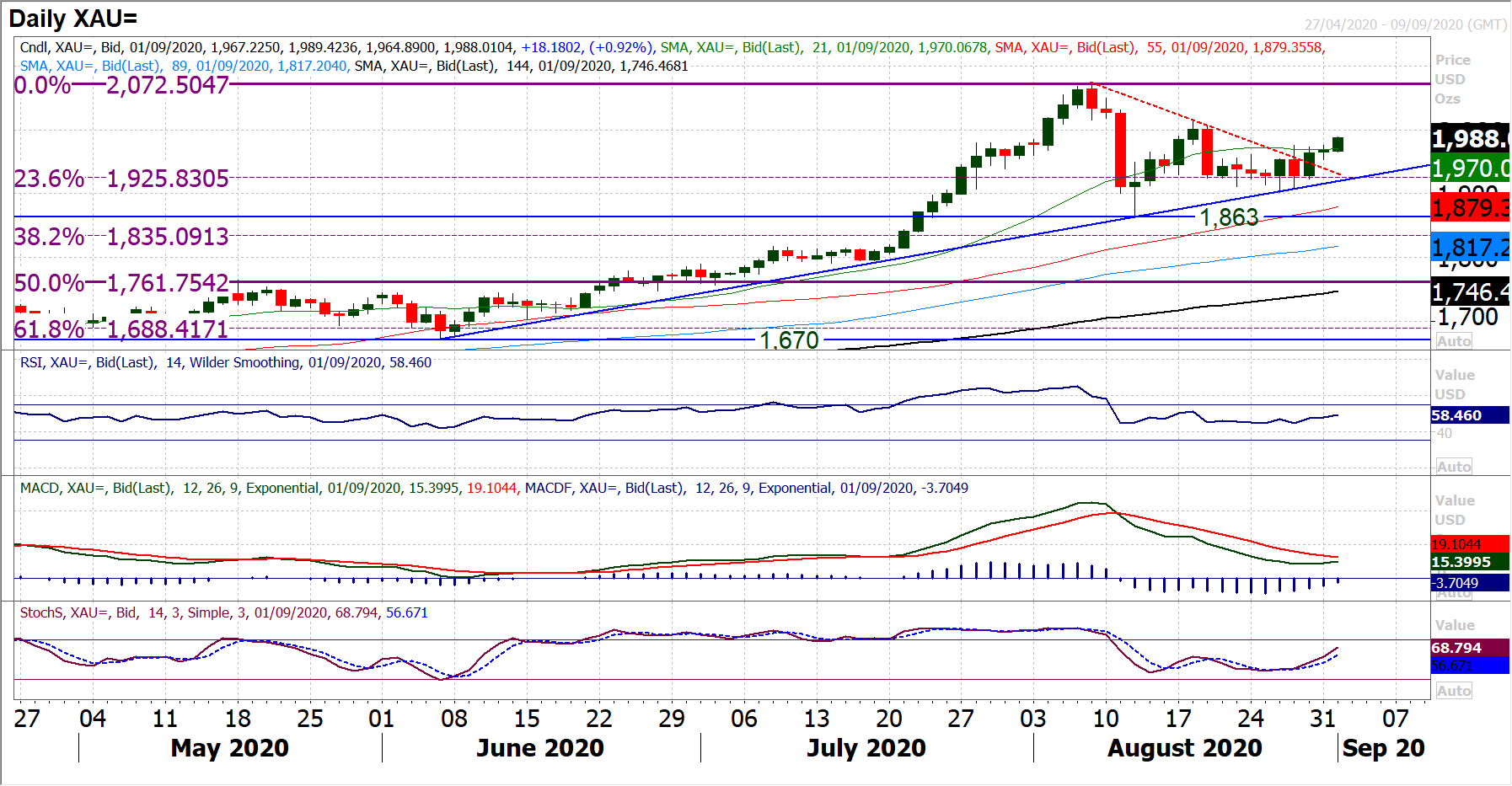 Near term corrections are a chance to buy oil. Once more, the rising 21 day moving average (today at $45.10) has been a basis of support for a market that continues its slow but sure pull higher. We continue to believe that chasing breakouts on oil is not the correct strategy, as so often the breakouts are followed by consolidations and drifts lower. Yesterday’s session has once more been a case in point. Instead, buying into the succession of higher lows remains preferable. A shallow uptrend from the mid-June low rises around $44.40 today, whilst last week’s mid-week low at $44.55 leaves growing support in this area now. We expect continued pressure on $46.25 (which saw an intraday breach on Monday without being decisively broken) and beyond. Looking further out, aside from a minor old low at $48.40, there is little real resistance until $53.10/$53.90. A close below $43.60 would be a breakdown to take note of now. 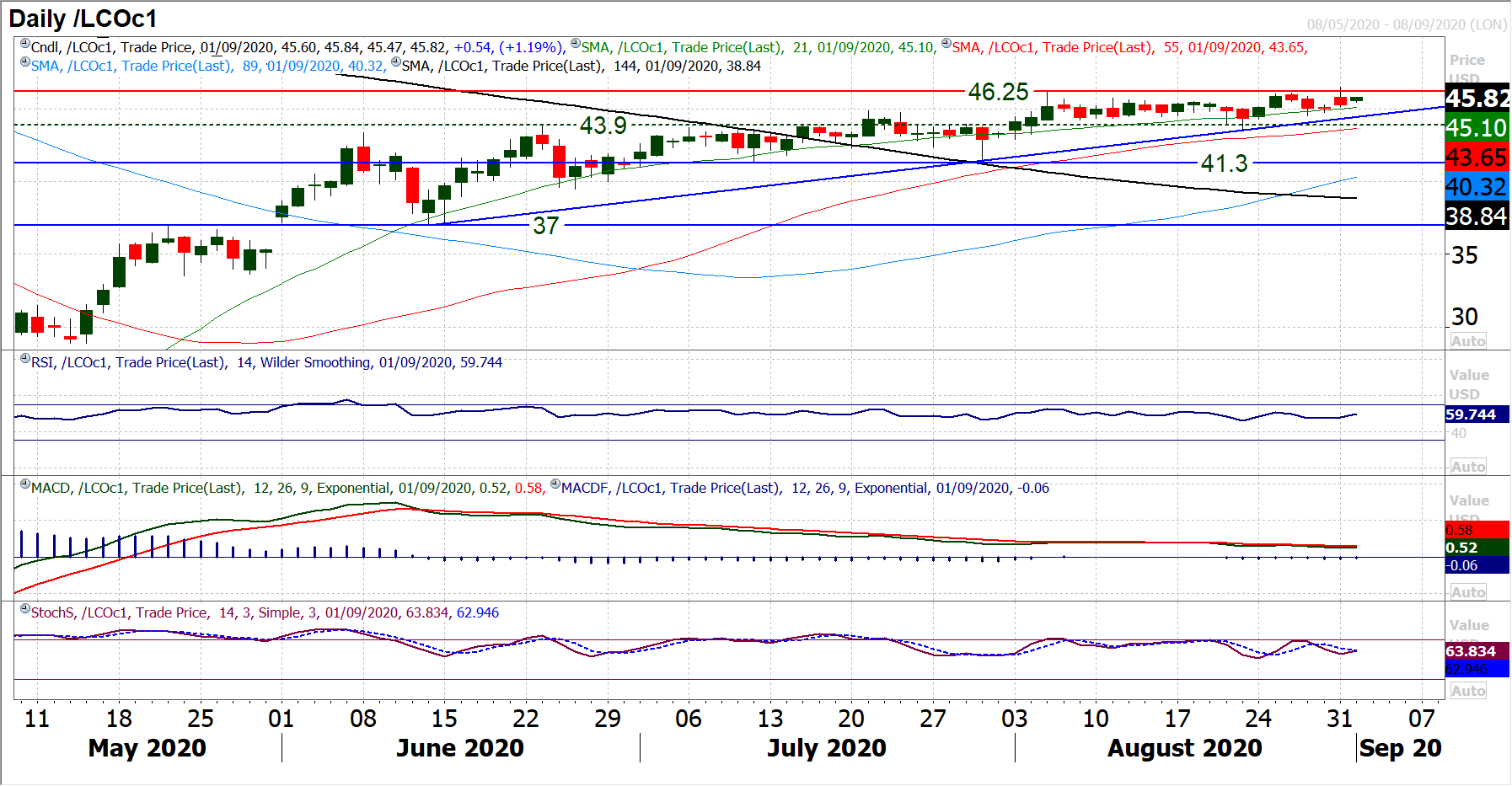 The creep back towards the all-time high was dealt a bit of a blow yesterday with a decisive negative session cutting -0.8% off the Dow. This move has broken a little seven session uptrend and pulls the reins on the bull run, for now. For much of the past few months, since the recovery kicked off, there have been occasional bouts of corrective slip. However, they tend to last just a few sessions and have all been seen as a chance to buy again. We see near term weakness as a chance to buy. The hourly chart shows that initial support sits around the 28,400 which is also the bottom of the old bear gap of February 28,400/28,890. Futures are currently ticking mildly higher and suggesting that the initial move today will be to hold this support. If this continues through the session we can expect that given the unwind already seen on hourly momentum, this will help to propel the market back to test last week’s high of 28,733 initially. However, closing the gap at 28,890 is also still preferred before testing the all-time high at 29,563. The main line of breakout support starts around 28,000/28,160. 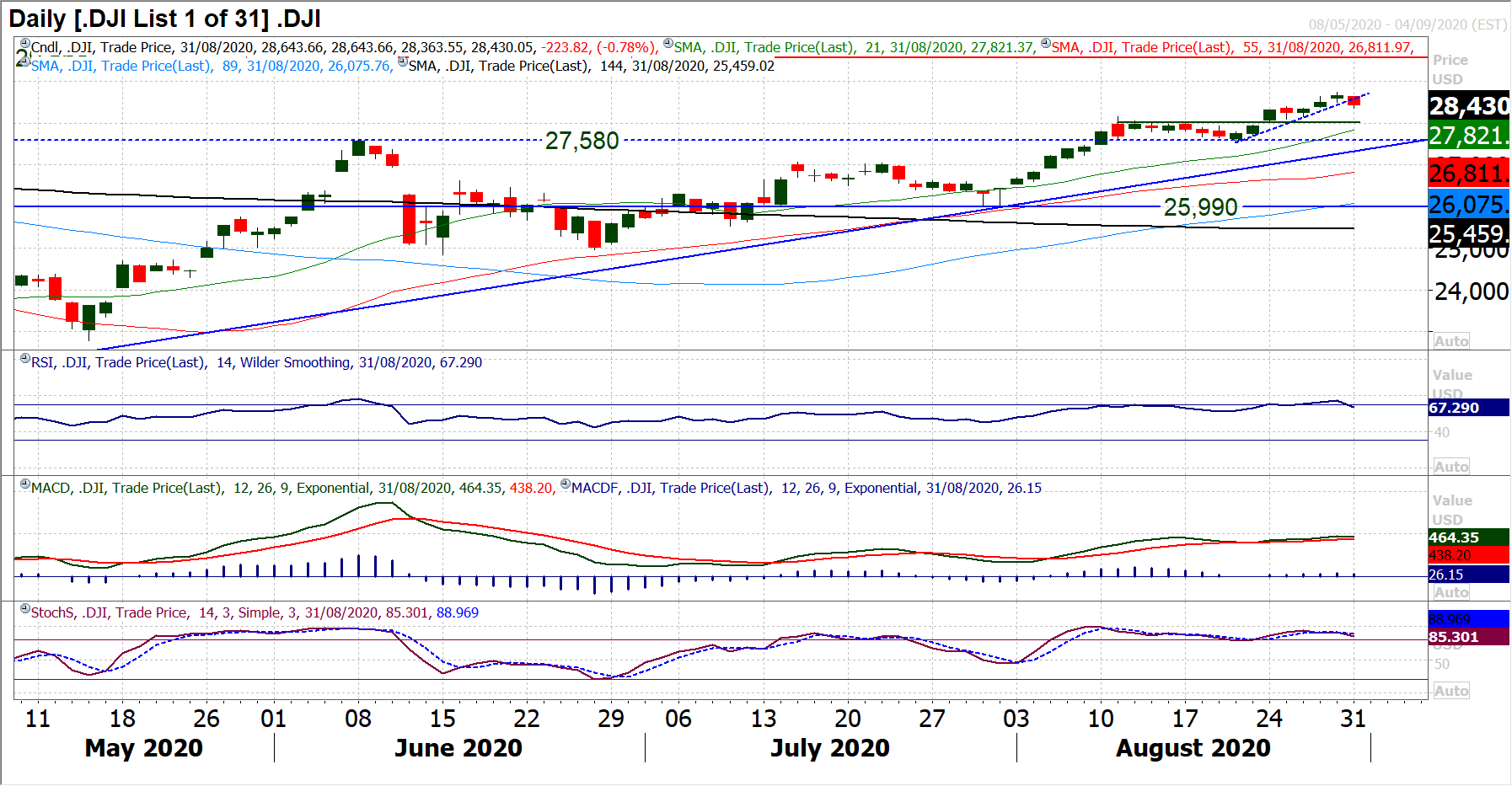