Trading Signals with the RSI

Get to grips with the relative strength index (RSI), a vital momentum indicator used in technical analysis to assess the market momentum of an asset and understand if it has been overbought or oversold.

The Relative Strength Index (RSI) is a popular momentum indicator used by traders looking at technical analysis. The RSI is an “oscillator” indicator that moves between the values of 0 to 100. It can help to signal the current state of the price, such as overbought/oversold conditions and the strength of the trend. The RSI is useful across several time horizons. The RSI looks at the number of periods (such as days, hours, etc.) across a given time frame in which price has risen, compared to the number of periods that the price has fallen. The formula then calculates where the price is trading relative to the range over the period in question. In the original study, Welles Wilder (the inventor of the RSI) used 14 periods as the optimum number to use. While it is possible to use other periods, it is generally accepted that 14 is the norm for traders to use. So, for example, on a daily chart, the 14 -day RSI would be used. On an hourly chart, 14 hour RSI would be used. As we said earlier, the parameters can be adjusted to meet the needs of the user. Shorter-term traders may like to use fewer periods when calculating the RSI, with the 9-period RSI often a popular calculation. Reducing the number of periods in the calculation will result in increased sensitivity/volatility of the indicator. This can result in more signals with quicker moves into the overbought/oversold territories.  However, the caveat is that it increases the potential for false signals.
Calculation Using an adaptation from the original Welles Wilder formula, the RSI can be calculated as:

Where RS = The average gain over the number of periods divided by the average loss over the number of periods The formula calculates a number in a range between 0 and 100.  Broadly speaking a reading above 70 is used to suggest that the price is overbought, while a reading below 30 is used to suggest that it is oversold. Be careful not confuse the RSI (Relative Strength Indicator) with the Relative Strength Ratio  One of the reasons why the RSI is known by its acronym is to avoid confusion with the Relative Strength Ratio, which is an indicator that measures the performance of one instrument relative to another.

The RSI oscillates between 0 and 100, with 50 considered to be the neutral, or mid-point. If the RSI is above the 50-level and advancing, momentum over the period being studied is considered to be positive. Conversely, if the RSI is below 50 and in decline, momentum over the period being studied is considered to be negative. In his original work, Welles Wilder found that the instrument became overbought when the RSI went above 70 and became oversold when the RSI fell below 30. The RSI can, therefore, help to identify signs of exhaustion in a trend. Figure 1. The 14 day RSI on EUR/USD However, exactly how you analyse the RSI will depend on whether the price is trading in a strongly trending market (either an uptrend or downtrend) or whether it is trading in a ranging market. In a trending market, the RSI can remain overstretched for an extended period. Due to the way the RSI is calculated, in a strong trend, there will often be sustained periods of positive trading days. Therefore, the more up days that are seen in the calculation period, by definition, the more the RSI can support a move above 70.  The RSI can subsequently be a gauge of trend strength as well as overbought/oversold. In a robust up-trending market, the RSI may be able to sustain a position above 70 for some time. In a strong down-trending market, the RSI may be able to sustain a position below 30 for an extended period. Therefore, the best way to trade with the RSI in a trending market is to trade in the direction of the trend. In a strong uptrend, the RSI, weakness is a chance to buy. Traders will look to the RSI unwinding towards the 50-level (or sometimes between 40 and 50) as the limit of the downside before the buying pressure resumes. However, risk comes with selling at a point where the RSI has become extended in a strong uptrend. This could result in either closing a long position too soon or going short into a rising market (which can be a high-risk strategy). If the price is in a trading range, it will move higher and lower between resistance and support levels. This will allow the trader to use classic overbought and oversold signals on the RSI.
The classic use of the RSI is as part of a mean reversion study. Traders would look to use the oversold 30-level for buy signals (or close short positions). Traders would seek to use the overbought 70-level to sell short (or close long positions). Figure 2: Reading RSI signals in a trending market on GBP/USD is different from a ranging market 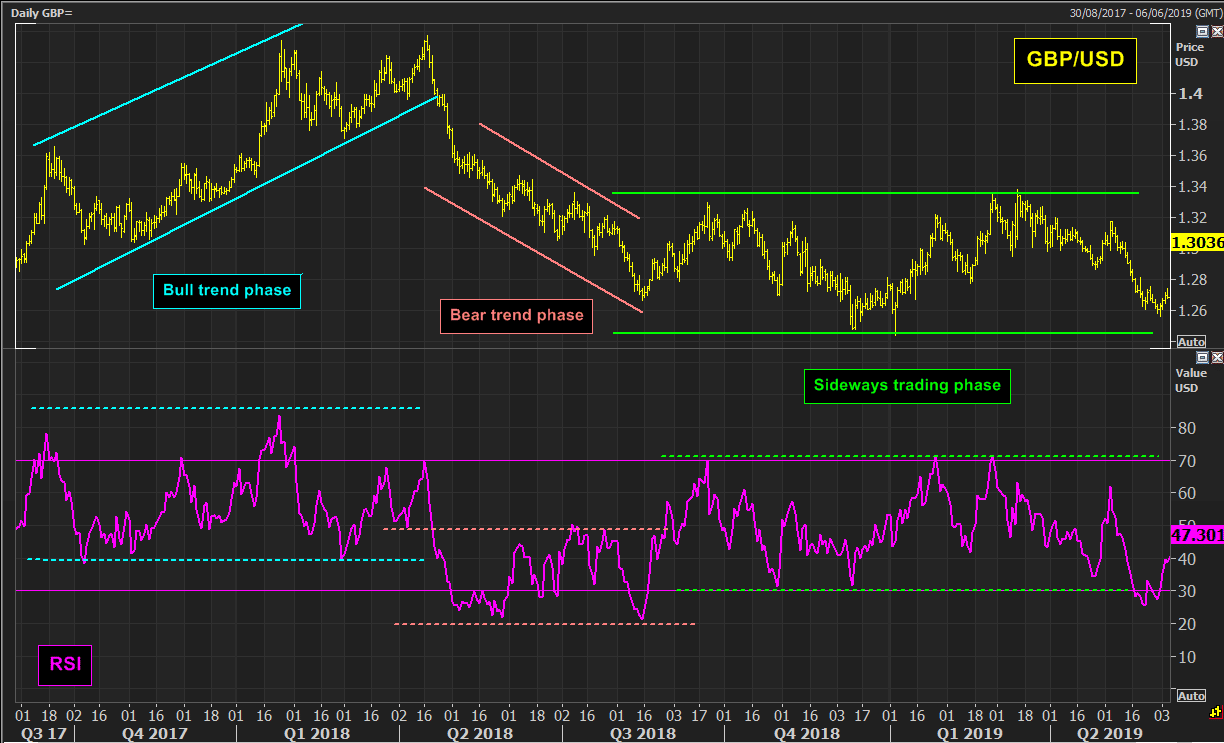 1.Crossovers A crossover is a buy or sell signal that is generated when the RSI moves through an extreme level and then begins to retrace the move. The crossover uses the levels that Welles Wilder deemed to be overstretched, with 30 considered oversold and 70 considered overbought. RSI crossover signals will work better in a ranging market. In a strongly trending market, the RSI can sustain an extreme position (either in an overbought or oversold territory) for some time before a reversal takes hold. In ranging markets, RSI crossovers and divergences (see below) can be the trigger signals. A crossover buy signal is generated by a sell-off that takes the RSI below 30, and then a recovery pulls the RSI higher to cross back above 30. The signal is generated as the price crosses back above 30. A crossover sell signal is generated when the price rise pushes the RSI above 70 and into overbought territory. A subsequent correction results in the RSI crossing back below 70, which is the sell signal.
Figure 3: RSI crossover signals on Gold3 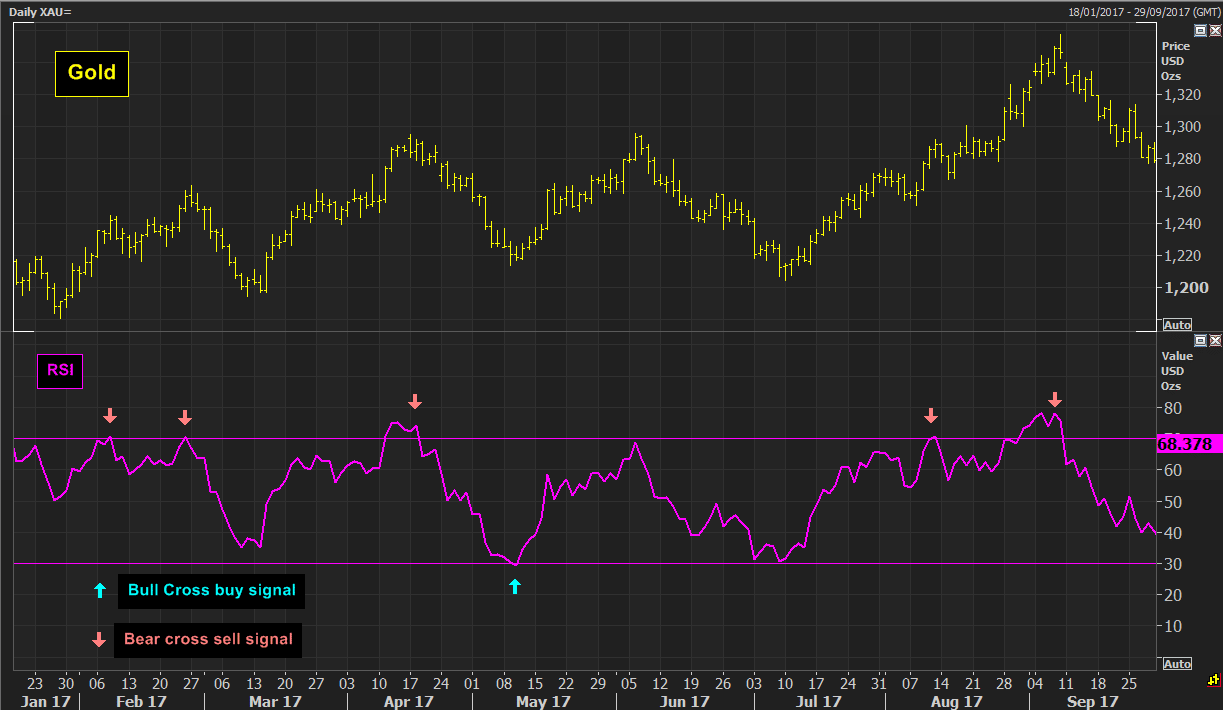 2. Bullish and Bearish Divergences Divergences are usually seen in trending markets, although they can also be of use in trading ranges too. Traders will look for divergences between the RSI and the price as an indication of a potential trend reversal.  In a bull market, if new highs are posted on the price, but at the same time, the RSI is in decline, it suggests that the strength of the upside momentum is waning.  This situation is referred to as a Bearish Divergence (or a Negative Divergence) and implies that there is an increased likelihood of a reversal in the price. A Bullish Divergence can be seen in a bear market, where there the price is making lower lows, but the RSI is starting to rise or make higher lows. The caveat for trading divergences is that a divergence between the price and the RSI can continue for some time before a reversal in price sets in. 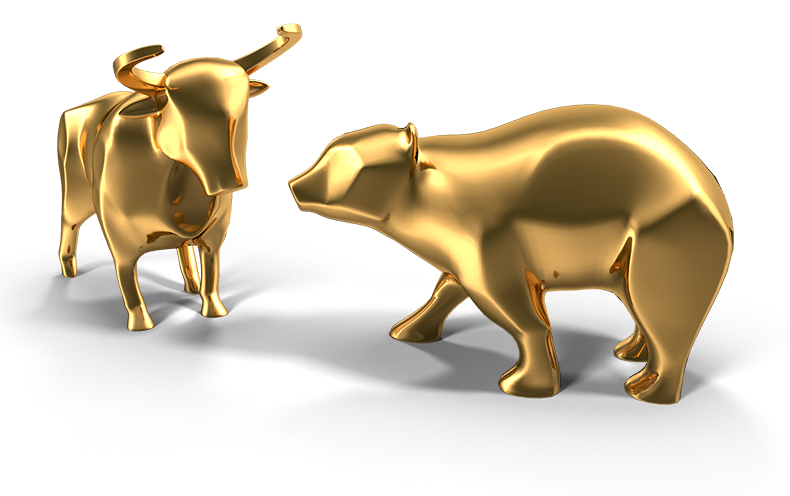 3. Failure swings A failure swing can occur in both an uptrend and a downtrend. In a bull market, a failure swing is a sell signal. It forms where the RSI moves into an extreme position above 70, only to then pull back below 70. The RSI then resumes a move higher only to create a second peak which is at or below the previous peak. The failure swing is then complete as the RSI moves back below its first low. In its perfect form, the RSI develops an “M” shaped pattern (or asymmetric “M”). In a bear market, a failure swing is a buy signal. It is formed where the RSI moves into an extreme position below 30, with a rally causing a low in the RSI and pulling it back above 30. The selling pressure resumes to drag the RSI back below 30 but is less pronounced. A second low is formed on the RSI either at or above the previous low. A failure swing is then completed as an improvement in the RSI pulls it back above the previous reaction high, thus forming (ideally) a “W” shaped pattern (or asymmetric “W”). N.B. The best signals using the RSI use a combination of the signals. For example, a bearish divergence with a failure swing can be a powerful sell signal. Figure 5: An RSI bearish divergence with a failure swing on EUR/USD 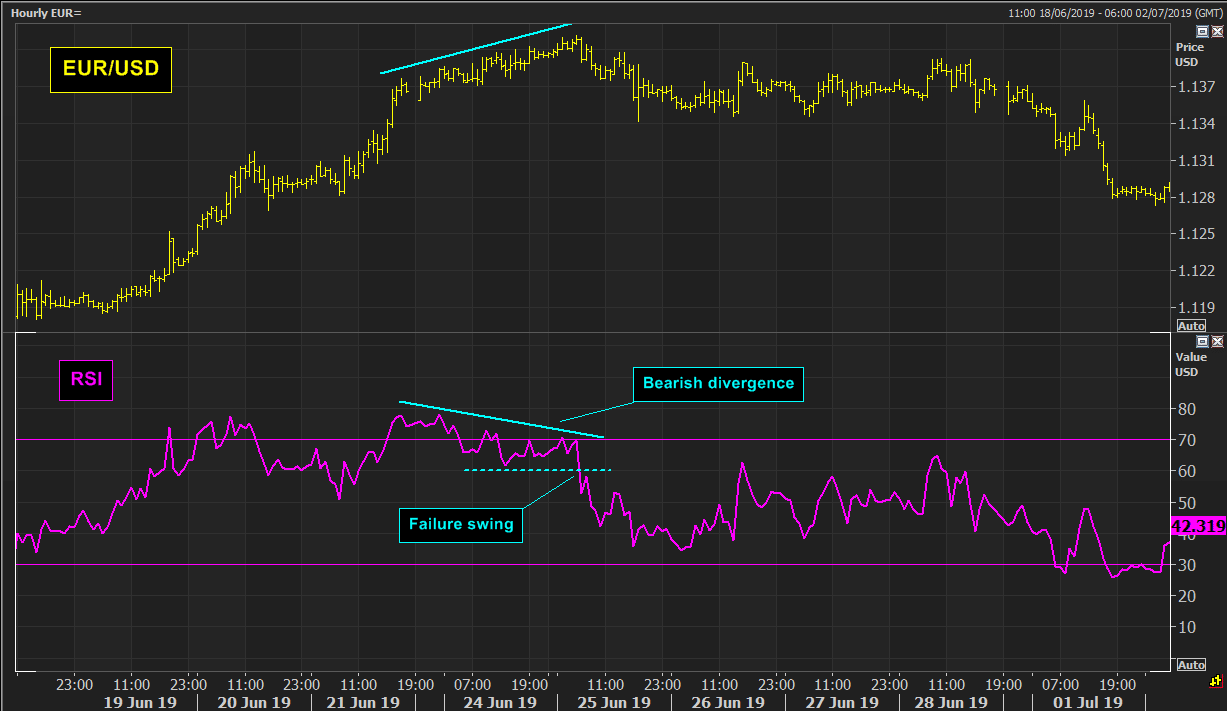 N.B. As with all of our indicators, we don’t recommend trading with indicators in isolation. We would always look for confirmation signals in other studies to improve the conviction of our analysis.