The dollar has taken a turn for the worse in the past 18 hours. There had been a creep of renewed downside pressure forming as Treasury yields had begun to fall over again. However, this creep turned into something more considerable in the wake of the much worse than expected New York Fed manufacturing data for August. This survey data deteriorating is a concern that the elevated COVID infections are about to hit the economic data. This is the first in a series of regional Fed surveys that could paint renewed worries over the state of economic recovery in the US. Previously, markets have been reacting to better than expected US data, but could this all be about to change again? It should be remembered that this is just one data point, but it has shaken the dollar and longer-dated Treasury yields have jagged lower (bear flattening the yield curve). Another key market this is impacting is pulling renewed buying pressure through the gold price, which is back above $2000 again this morning. 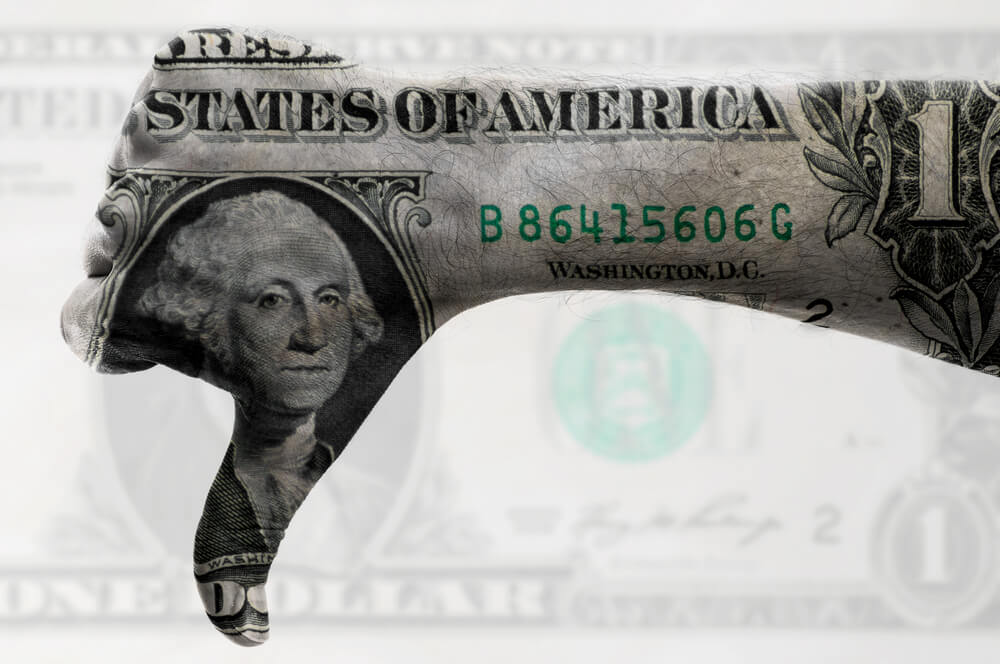 Wall Street closed mixed last night, with renewed strength in the tech sector not overly filtering down to older economy stocks. The S&P 500 closed +0.3% higher but till unable to make all-time highs, ending the day 3382. Futures are also cautious this morning, with the E-mini S&Ps -0.1%. Asian markets have been mixed overnight, with Nikkei -0.2 and Shanghai Composite +0.1%. European markets are taking a cautious stance, with FTSE futures -0.7% and DAX futures -0.5%. In forex, the USD weakness is still the main story, with JPY outperformance being the key winner. It is interesting to see NZD still underperforming. In commodities the dollar weakness is helping to drive gold back higher by +0.8% and silver +2%. Oil is again struggling for traction, falling by half a percent.

The prospect of a dollar rally has been threatening in the past couple of weeks, but it seems that there was a decisive shift away from this line of thinking yesterday. The Swiss franc is not normally seen as a lead indicator, but this morning we have seen Dollar/Swiss now at its lowest since early 2015 (when the SNB removed the currency ceiling). This bodes well for potential dollar negative range breaks for other major currency pairs too (such as EUR/USD). Yesterday’s decisive move lower on USD/CHF was a fourth consecutive negative candlestick and tested key support at 0.9050. This support is breaching this morning and a close below 0.9050 would complete a three week consolidation rectangle breakdown to imply -150 pips of downside projection. Momentum indicators are set up for the move, with RSI falling over again around 40 recently to now hit 30, whilst Stochastics also look to cross lower with downside potential. The move is leaving 0.9200/0.9240 as key resistance now. Intraday rallies are now seen as a chance to sell. The hourly chart shows resistance 0.9080/0.9100 is now a sell zone, with any intraday unwind on hourly RSI towards 50 as an opportunity. 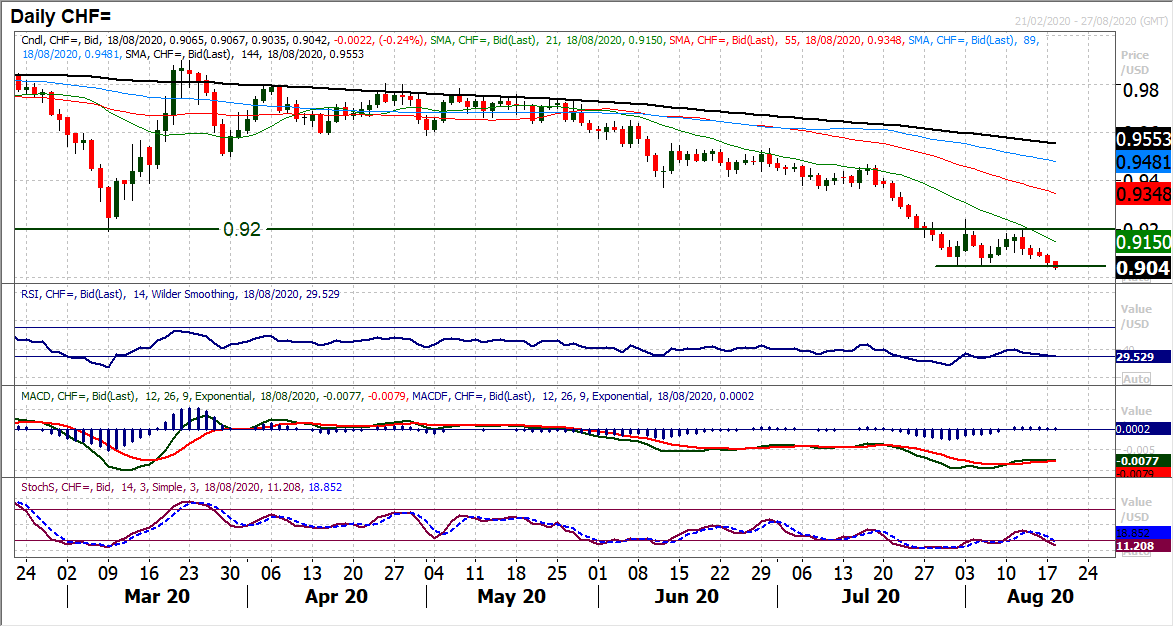 There seems to have been a subtle shift in market sentiment in the last couple of sessions. After a couple of weeks of consolidation where the dollar selling pressure had eased, we are now seeing a renewal of the intent to sell the greenback. This is driving EUR/USD higher in a move now threatening to breakout. There have now been four solid positive candles in a row which have taken the market towards a test of the resistance at 1.1915 once more. Momentum indicators are set up for the test as daily RSI and Stochastics swing higher towards strong configuration again, whilst MACD are also looking to bottom. The market is looking primed for a breakout. A close above 1.1915 would complete a 220 pip continuation rectangle breakout and imply a move towards 1.2235 in the coming weeks.  The hourly chart shows a run of higher lows now forming, with a band of initial support 1.1825/1.1865 to use as support for any intraday weakness. 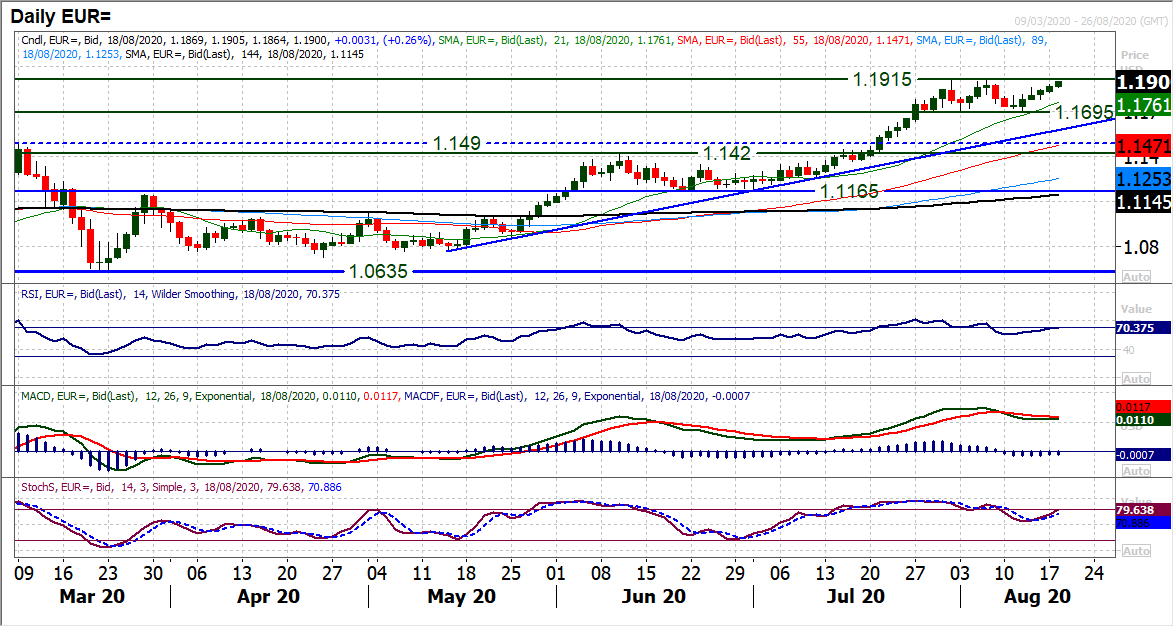 The ranges that EUR/USD and Cable have formed in recent weeks are very similar. Both are also now beginning to reflect a renewed selling pressure on the dollar too. A run of positive candlesticks is forming for Cable, something that is continuing today and is setting up the market now for a test of the range high 1.3185. More importantly though, the market is positioning for a look at the key resistance at 1.3200. How Cable reacts to these two levels in the coming days could be key for the medium term outlook. A decisive closing breakout above 1.3200 would be a really strong signal. Momentum indicators are strengthening once more. The daily RSI is back above 70, whilst Stochastics are crossing higher and the market looks primed for continued gains now. The hourly chart has developed a positive configuration of higher lows and positive momentum set up. The hourly RSI consistently bottoming around 50, whilst MACD lines are above neutral, reflects weakness quickly being supported. With the market breaking to a one week high today, unwinding moves towards 1.3100 are now a chance to buy. For this move to continue, holding above 1.3070 reaction low from yesterday is needed. 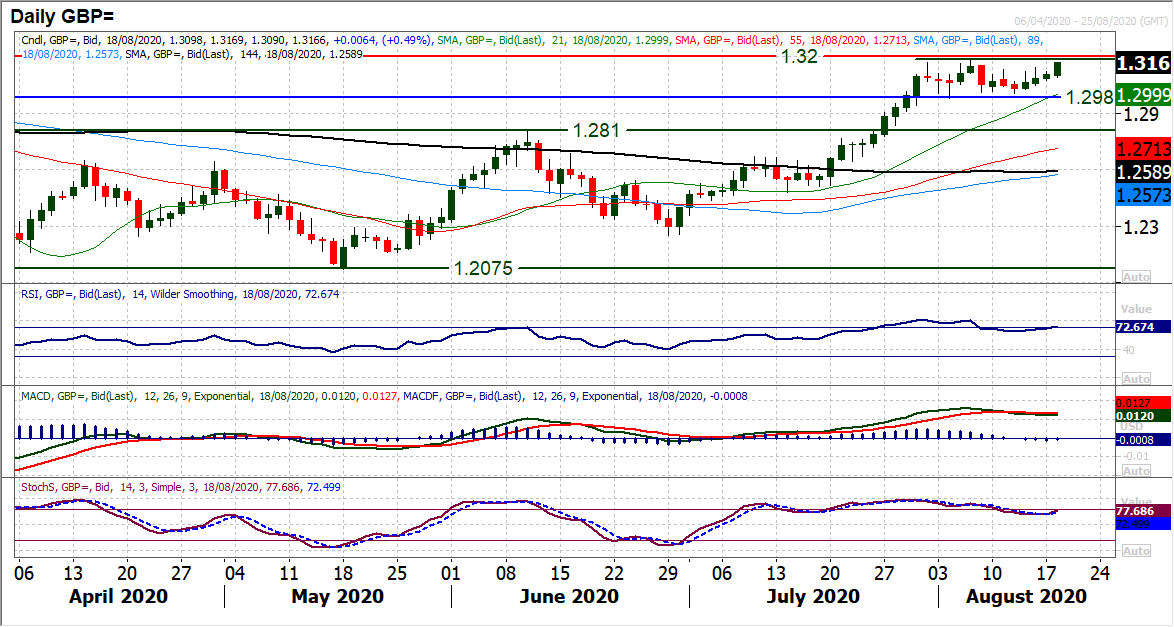 A second decisive negative candle into the close last night has put the prospects of a dollar rally to bed. A couple of weeks ago we were talking about the recovery needing to get through 107.50 to really clear the overhead supply that was predominantly between 106.00/106.60 but was also up towards 107.00. The rally has failed around 107.00 to leave a key resistance in place but also more importantly, all the old stale bulls of the early summer are jumping ship, and fast. The uptrend that had been developing over the past couple of weeks has been broken with conviction, and now the market is opening the downside once more. With 106.00 now broken once more to the downside, this becomes a key gauge of resistance again. Daily momentum indicators are turning sharply lower, with MACD lines rolling over under neutral and Stochastics bear crossing. Next important support is 105.30 which is the key higher low of recovery. On pure technicals, if this level is broken, then there is a decisive new negative outlook. Intraday failures under 106.00 will increase the negative pressure, whilst the hourly chart shows resistance 106.00/106.40 now. 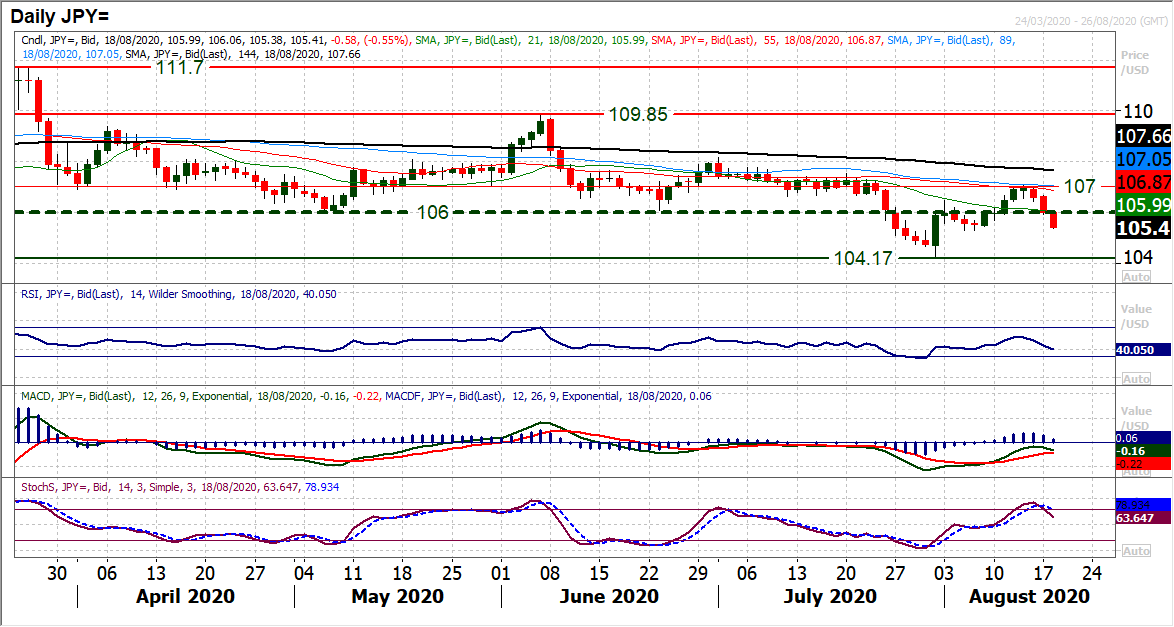 Gold had been consolidating throughout the European morning yesterday, but the sharply weaker than expected New York Fed manufacturing data seemed to flick a switch. The rally has been given a new lease of life. A decisive and strong bull candle added over +2% to the price yesterday and is sustaining the renewed positive momentum today. The momentum indicators are reacting too. Daily RSI and Stochastics had been consolidating, but are now pushing decisively higher with RSI above 50 and Stochastics higher off a bull cross. The bulls will be looking to use the lack of real resistance until $2015 to drive the market higher today. The hourly chart shows how the old breakout at $1980 is once more becoming a basis of support today. The near term strength is certainly developing today and a move into the next key resistance band $2015/$2050 is on. We now look to use near term weakness into support as a chance to buy. Initially this means $1980/$1995 is supportive, but $1966 (last week’s initial rebound high) is also supportive. 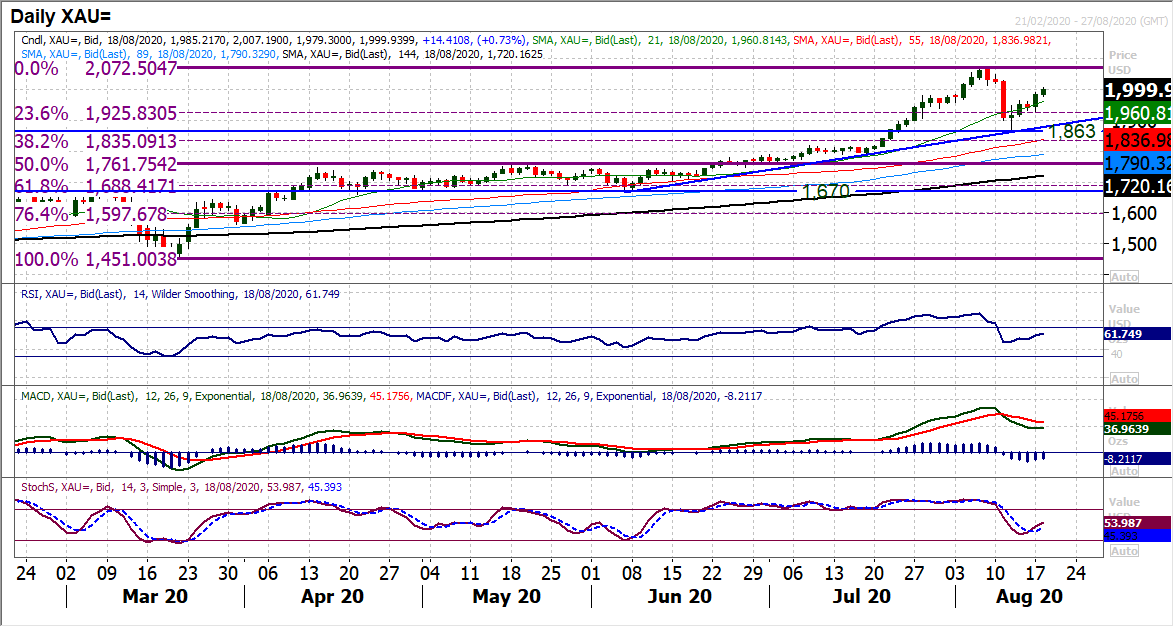 The outlook for the recovery on Brent Crude remains on track, even if it is pretty slow going. The market seems to go through phases, where an attempt to break the shackles for a breakout is curbed and then slips into a phase of consolidation. “Inside day” sessions are commonplace as the market throws out an array of contradictory moves. However, stepping back, we continue to view the near term weakness as a chance to buy, with a series of higher lows continuing to be left. Throughout July the support based around $41.30, but now that the market has moved above $43.90 (the old June/July resistance), a new floor of support is developing at $44.25. Yesterday’s decisive positive candlestick showed a market looking to use weakness as an opportunity. The next step is to build another positive session to try and get some momentum back into the move. Resistance is in place at $45.80/$46.25 but we expect this to be breached soon as the market gradually makes its way towards the $50s. The next real resistance is not until $53.10/$53.90. 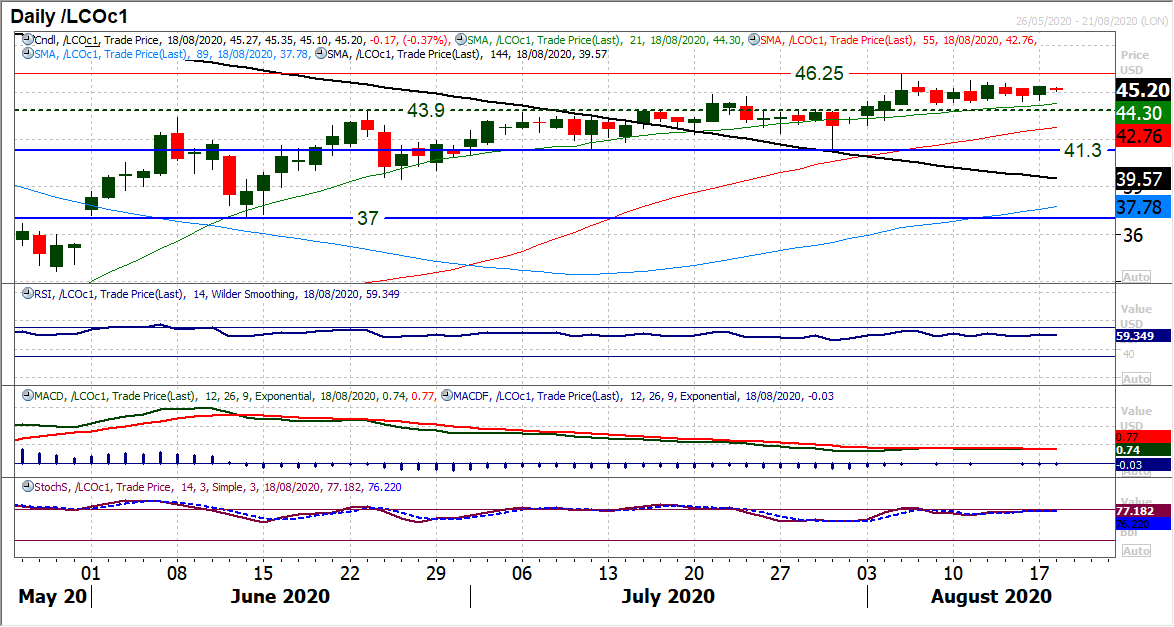 The mixed outlook of the past week on the Dow continues. Since breaking out above 27,580 resistance the bulls have reacted with a stuttering period of contradictory candlesticks. This is a market lacking conviction right now. The Average True Range is currently 317 ticks which is the lowest since February. However, the past four sessions have all barely mustered 200 ticks of daily range. What should we read into this? For now, this is just a consolidation and nothing to be overly concerned by (remember it is the August holiday season). Holding up above 27,580/27,625 breakout support will maintain a strength to the outlook. Momentum indicators are positively configured still, even if the RSI is just slipping back slightly into the mid-60s (which is understandable). We are still happy to buy into near term weakness. Even if the market were to drop back into 27,070/27,580 this would still be seen as an opportunity to buy into support. Resistance is at 28,155 initially from last week’s high, whilst the old February bear gap at 28,400/28,890 is still to be filled. 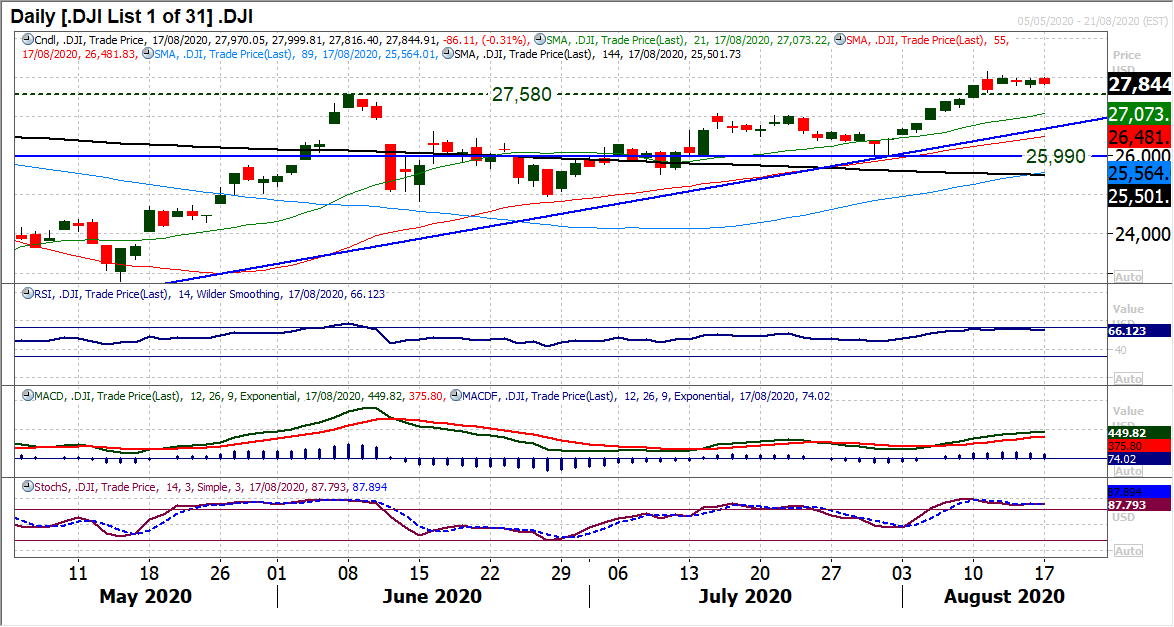