The Wall Street sell-off has become a significant issue for risk appetite. The rout in the tech stocks may amount to little more than a sector rotation when the dust settles, however, the rattling impact in the meantime is hitting sentiment across major markets. The sell-off is just one factor though, with a slew of other risk negative headlines hitting across markets today. Infection rates of COVID-19 are accelerating higher, whilst one of the leading vaccination trials (by AstraZeneca and Oxford University) has been put on hold due to an adverse reaction in one human participant. The prospect of the UK and EU being able to agree on a trade deal before the 15th October soft deadline is looking increasingly unlikely, with UK Gilt yields and sterling falling hard. Furthermore, the potential for agreement on a US COVID aid fiscal support package also seem remote as both Republicans and Democrats continue to be way apart in their demands. This is all adding up to risk aversion across major markets. Equities continue to fall, whilst US bond yields are falling (with a “bull flattening” yield curve, which tends to reflect risk aversion). In forex, the dollar rally continues and the Japanese yen is a key outperformer now. Oil is falling hard on the perceived hit to demand from second waves. It is time to bunker down. 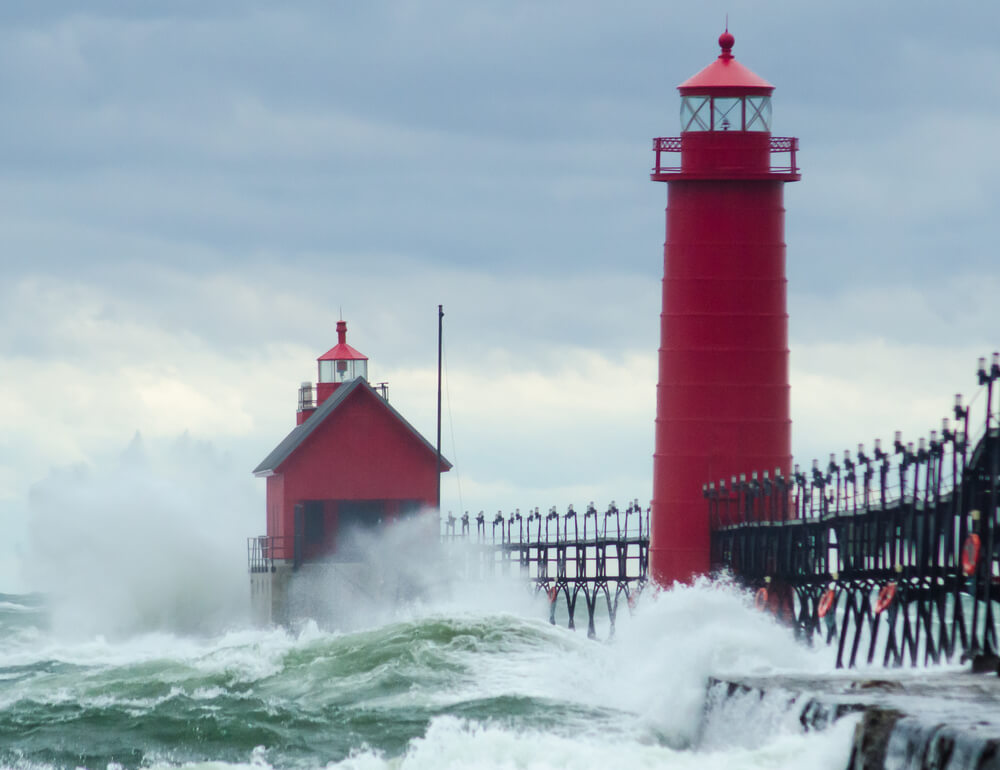 Wall Street closed sharply lower in a tech-led decline, where the S&P 500 was -2.8% at 3332, whilst the Dow was also -2.3% lower. US futures looked to be stabilised a touch this morning, but are now lower again, with the E-mini S&Ps -0.2%. Asian markets felt the squeeze this morning, with the Nikkei -1.0% and Shanghai Composite -1.1%, whilst FTSE futures and DAX futures are also around half a percent lower into the European open. In forex, GBP continues to be slammed on fears that the UK is moving towards leaving the EU with no trade deal possible, whilst the risk negative bias is pulling JPY outperformance. In commodities, the drift lower is once more looking to take hold, with gold -$4 (-0.3%) and silver also lower (-0.8%). Oil is another asset that is being driven ever lower by the growing risk negative outlook.

The Bank of Canada is the main focus on the economic calendar today, with a bit of US employment data snuck in too. The Bank of Canada monetary policy is at 1500BST and there is no expectation of any change to the +0.25%  interest rate, and whether the BoC retains an encouraging outlook will be watched. The US JOLTS jobs openings are at 1500BST too, with an expectation of to 6.00m in July (up +1.8% from 5.89m in June).

As the dollar strengthened significantly yesterday, the conditions are set up for silver to be taking a turn for the worse. However, with there being a flight to safety across asset classes, this may also help to prevent a significant decline on silver too. This seemed to be the move yesterday, as initial selling was then met with a rebound into the close. A breach of key near to medium term support at $26.05 (which provided a floor in late August) was subsequently bought into and only a small decline on the day. It seems to be a market full of uncertainty right now. An initial tick lower this morning has again consolidated. The initial breach of $26.05 will though be of concern for the bulls if the market continues to drift. A closing breach of $26.05  would see a breakdown completing a topping out of the price and would imply downside of c. -$2.80. Adding to concern will be that having been the basis of support for so many weeks during the summer, the 21 day moving average (today at $27.04) has now turned to become a basis of resistance. The pressure growing on $26.05 has also come with the RSI moving towards 50 and its lowest since early May. This is very much of another medium term crossroads now. There is resistance at $27.15 now and leaves $26.30/$27.15 as a near term sell zone. A close above $27.15 is needed to improve the outlook now. 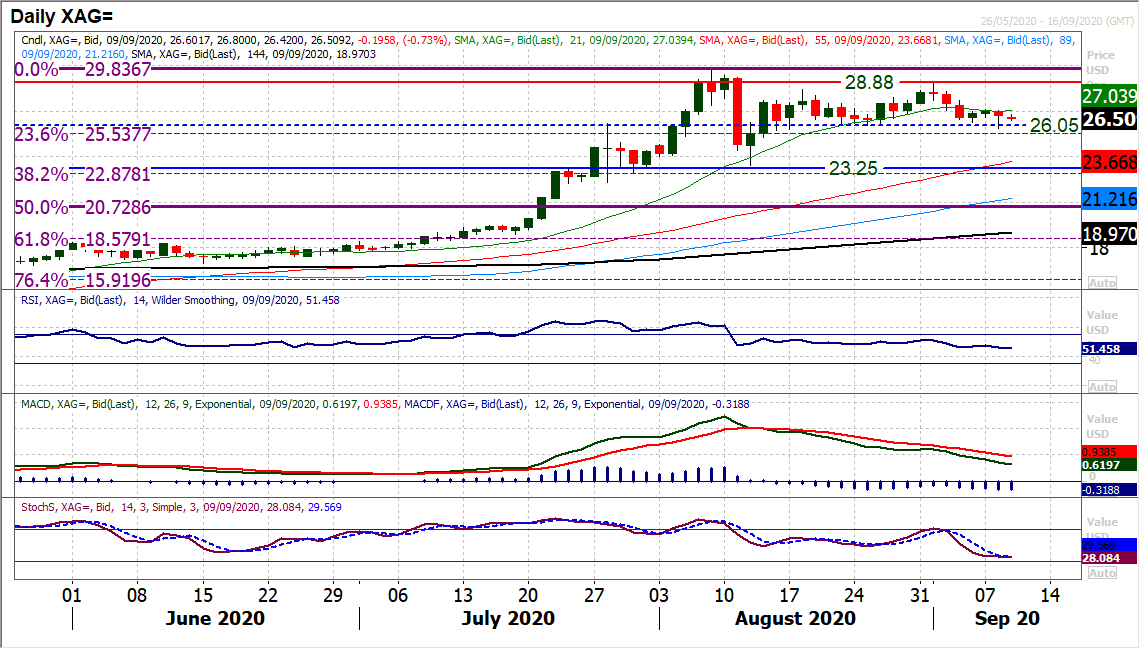 With the euro still reeling from the comments of ECB chief economist Philip Lane, and the dollar rebound in full swing, we continue to see EUR/USD dragged back. This near term unwind now threatens to be something more considerable. The market is testing a confluence of support from a rising near four month uptrend (today at 1.1770) and the first key support at 1.1750. For some time we have discussed of the importance of the support band 1.1695/1.1750 holding firm, but this is now under increasing threat as momentum indicators continue to deteriorate. With yesterday’s decisive negative candlestick, the 14 day RSI has closed below 50 for the first time since mid-May (i.e. since the uptrend began). This does not bode well, considering also the Stochastics and MACD lines continue to correct too. The big question is whether this support band 1.1695/1.1750 can hold firm, as if there is a close under 1.1695 then a correction towards 1.1500 would be implied. The hourly chart shows initial resistance around 1.1780/1.1800 this morning, whilst 1.1850/1.1880 is strengthening too. 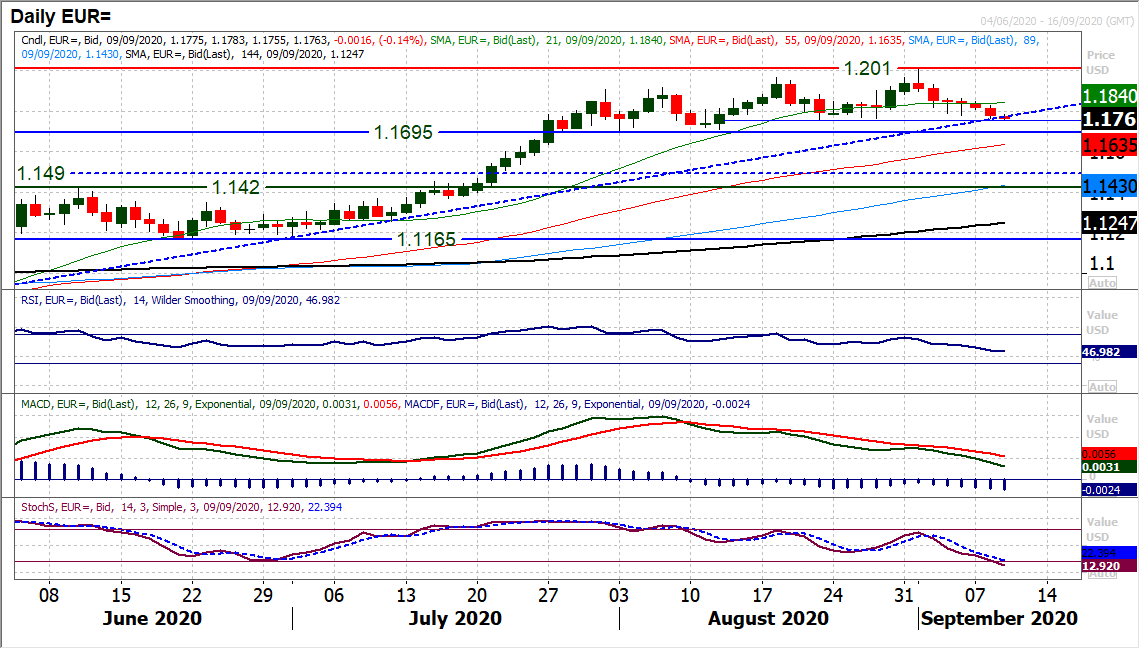 An acceleration lower on Cable has really taken hold in recent sessions, with the market losing -180 pip in yesterday’s session. This has come amidst almost perfect selling conditions, with GBP battered from increased Brexit risk and USD engaging a broad risk-off rally. The move has retreated below 1.3000 and is breaking the key support band 1.2980/1.3000 with further downside today. Momentum is increasingly corrective, with RSI into the low 40s, whilst MACD and Stochastics accelerate lower. The inference is that intraday/near term rallies are now a chance to sell. A closing breach of 1.2980 would imply further downside now towards a previous breakout support at 1.2810. The hourly chart shows resistance at 1.3000/1.3055 now, but the market would effectively needs to move through 1.3170 to really suggest a meaningful return to bull control. 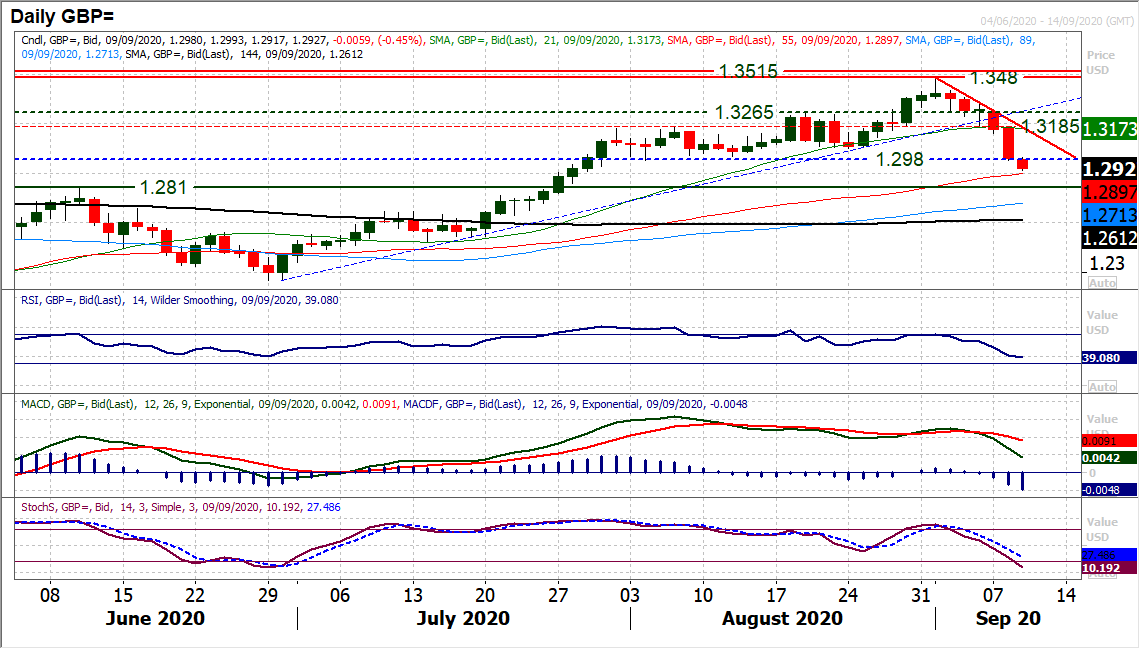 Even in the face of growing USD strength, the negative sentiment across major markets yesterday has really driven a safe haven bias and JPY outperformance. This has resolved an indecisive phase of trading with a decisive negative candlestick. Moving the market back to the 106.00 pivot is again a rejection of the 106/107 area for the bulls. This key overhead supply remains a real stumbling block for recovery. The rallies are also declining too, with the move once more having failed around the two month downtrend (falling today at 106.40) and the falling 55 day moving average (today around 106.45) A breach of the support band 105.80/106.00 would being the one month range lows back into play, meaning 105.10 becomes the focus again. This remains our preferred target too. Resistance is growing at 106.50 under the key 107.00 level. 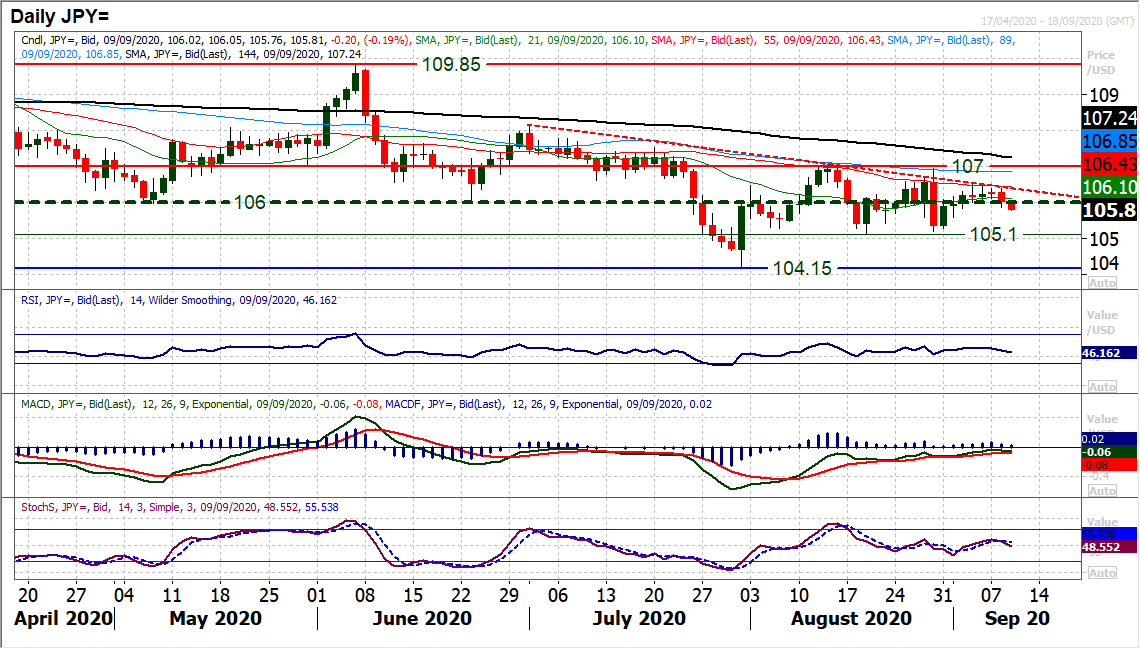 Another almost flat close on the day does not tell the story. Holding the support of the 23.6% Fibonacci retracement (of $1451/$2072) at $1926 on a closing basis is a little like a swan swimming right now. Seemingly smooth on a closing basis, but intraday the buyers are having to work feverishly hard to sustain the level as continual intraday moves to test $1902/$1910 are seen. The resolve of the bulls is commendable, however the pressure seems to be mounting by the session now. If the defence is broken, it could result in a strong move lower. A close below $1902 opens $1863 as the next test. Daily candles have a continual negative bias to them and having broken the three month uptrend, the outlook is deteriorating. Early morning moves are again pressuring lower today. The hourly chart shows not only how the downside is consistently being tested, with a negative bias on hourly momentum studies, but also how resistance is mounting around $1940. It needs a move above $1955 to suggest a recovery is back in play now. 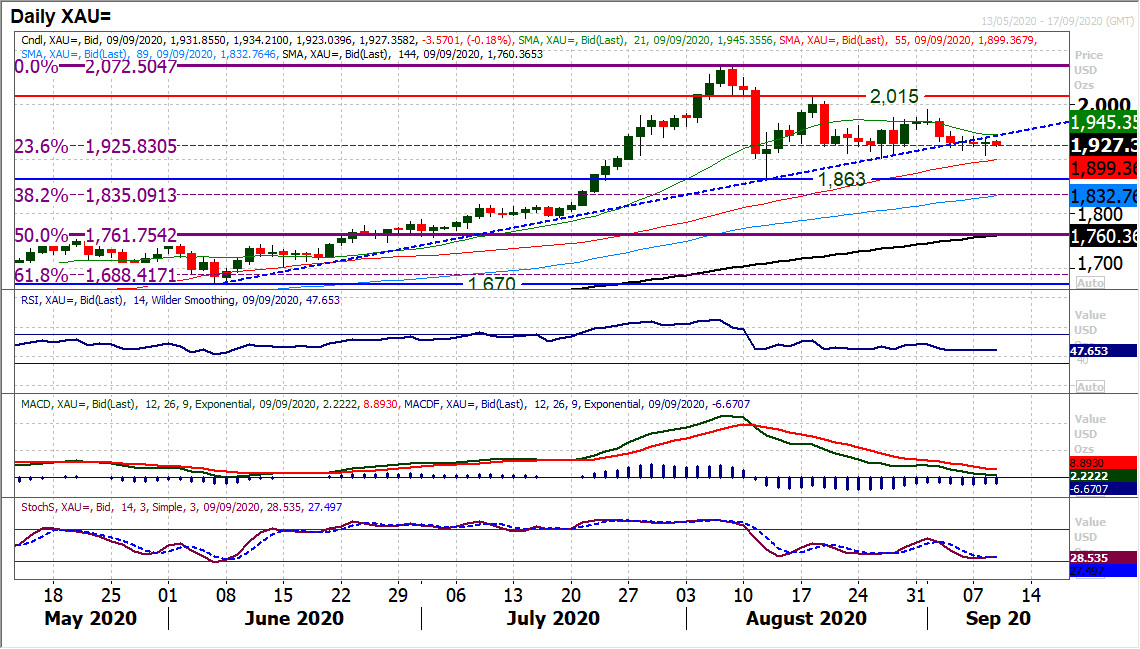 Selling pressure is accelerating on oil. Support after support is now being broken and in quick time as yesterday’s -5.3% decline shows. An outlook changing move has also now taken hold. A massive break of the $41.30 support from the key July higher lows leaves the outlook now decisively corrective on a medium term basis and opens the next key support at $37.00 to be tested. It leaves a big band of overhead supply too now, between $41.30/$43.60 that would need to be overcome for any sense of positive outlook to be regained from here. Momentum indicators are decisively into corrective territory, with MACD (falling below neutral), Stochastics (below 20) and RSI (below 30) all bearishly configured now. It suggests that intraday or near term rallies are a chance to sell now. 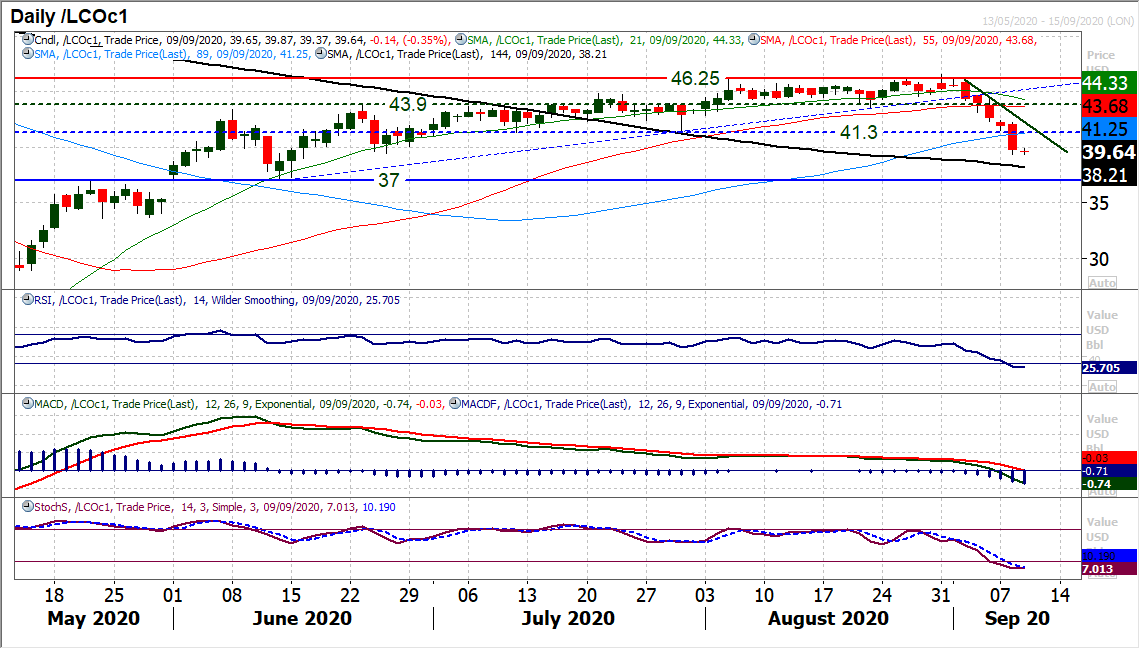 It had looked initially yesterday that the Labor Day public holiday in the US had put a pin in the recent selling pressure. However, US traders had a different idea, and once more sold sharply throughout the session yesterday as the Dow closed another -2.3% lower. Already having done mounting damage to the technical outlook, yesterday’s decline broke two more key technical levels. A five month uptrend dating back to April has been breached, whilst the market has also (more importantly) closed below the key support of 27,525/27,580. This move now suggests that the slide is more than just a blip in the uptrend, it is something more considerable. A two day close under 27,525 would confirm this. Futures appear to be relatively stable this morning, but there again, that is what we saw yesterday before the latest huge sell-off. The next support of note is 27,035/27,070 but with growing corrective momentum now, further weakness back towards 25,990 (the next key higher low) could be seen. Resistance is now overhead between 27,580/28,000. 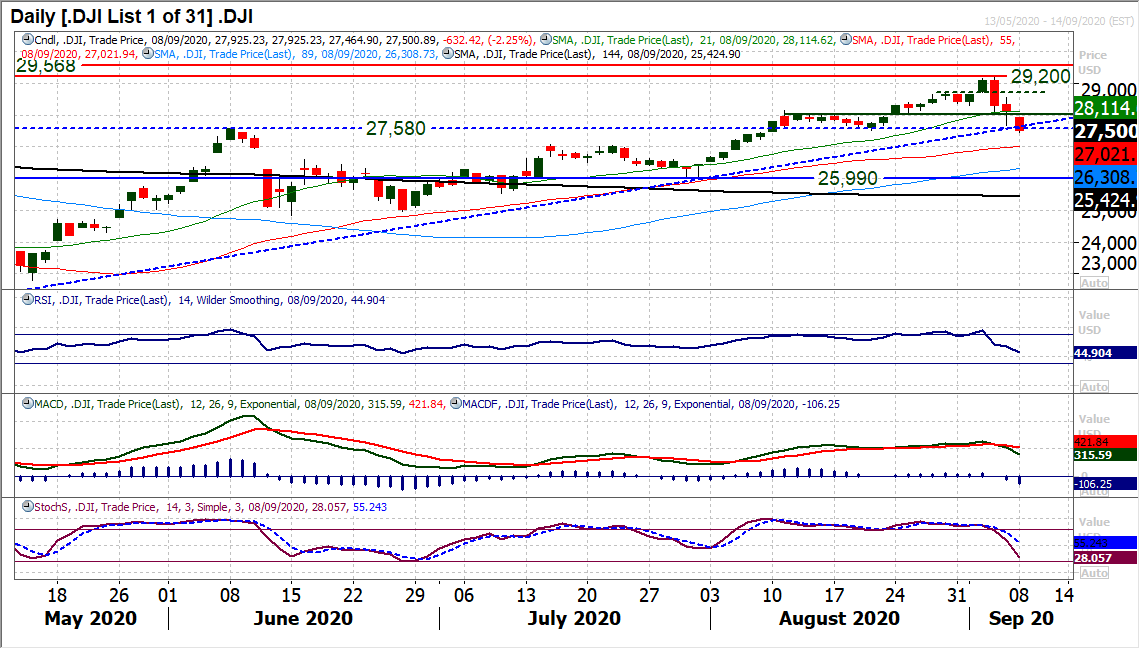