Even though the outlook for gold remains positive medium to longer term, the traction to drive the market strongly higher is lacking. This lends to a more cautious positive outlook on gold. Weakness remains a chance to buy, however, this may also mean that trading horizons will need to be shortened and targets for bull runs need to be reined in. 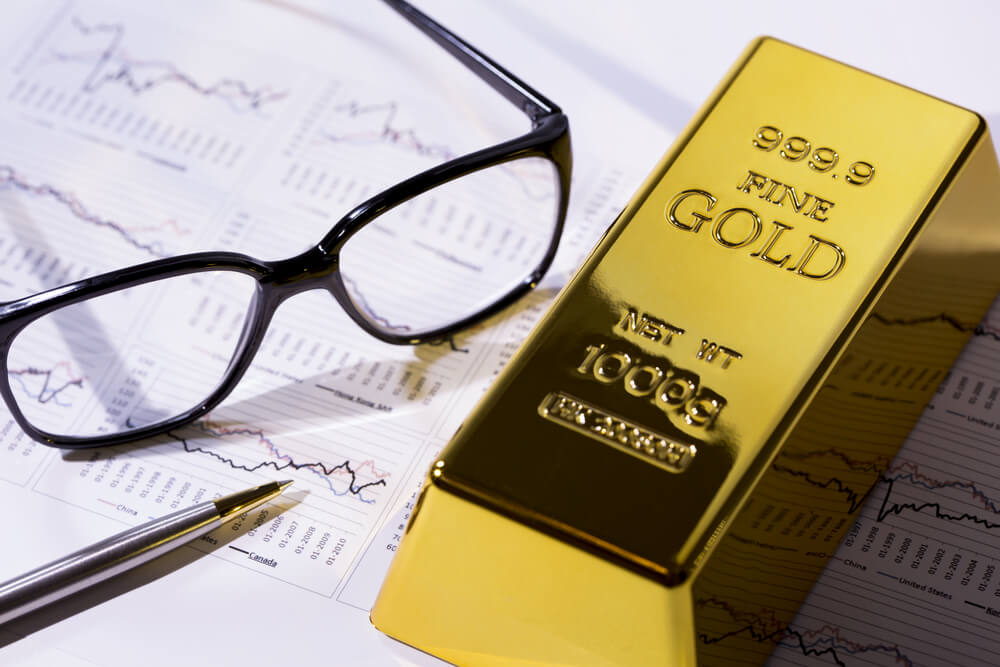 Recently we have been focusing on the lack of traction that gold would find as Treasury yields form tight ranges. The strong negative correlation of gold with the US 10 year Treasury yield (a rolling 12 month average of -0.5 is strong) means that gold is unlikely to find consistent traction in a bull run whilst yields remain stuck sideways. We believe that this is beginning to play out, as the technicals are beginning to reflect this.

Below we see the range formation on the US 10 year Treasury yield. We believe that yields will remain at low levels for the weeks and months to come. Whilst the outlook for gold remains strong, this will hamper the positive traction on gold. 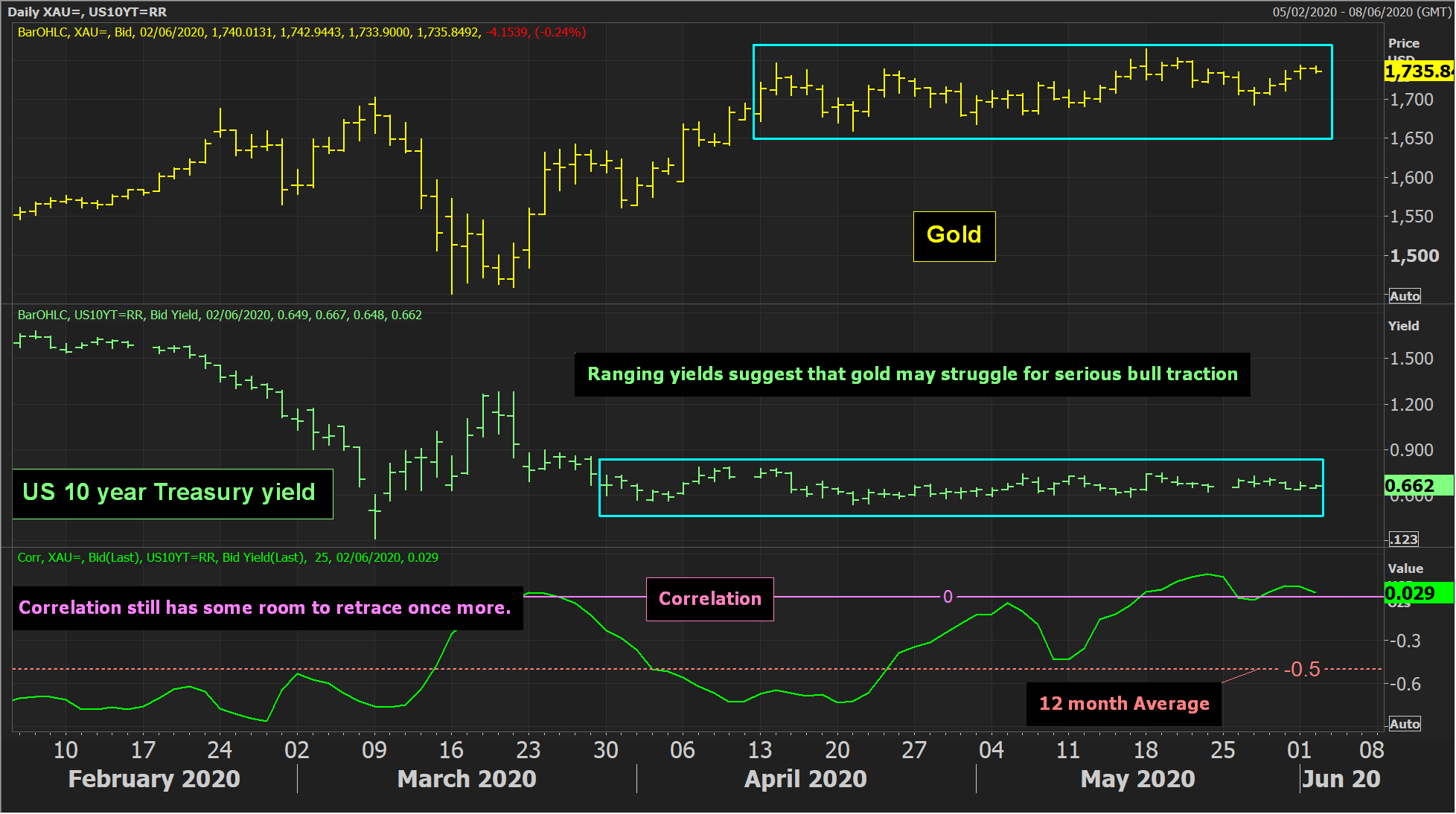 This may mean that the big upside targets for gold on positive breakouts may be undershot before retracement moves set in.

The Dollar Index breaking down from its consolidation rectangle plays into an upside bias for gold. However, we continue to see a less strong negative correlation of gold versus USD (c. -0.22) that compared with Treasury yields. This should lend an upside bias to gold but also one that lacks the traction as yields range. 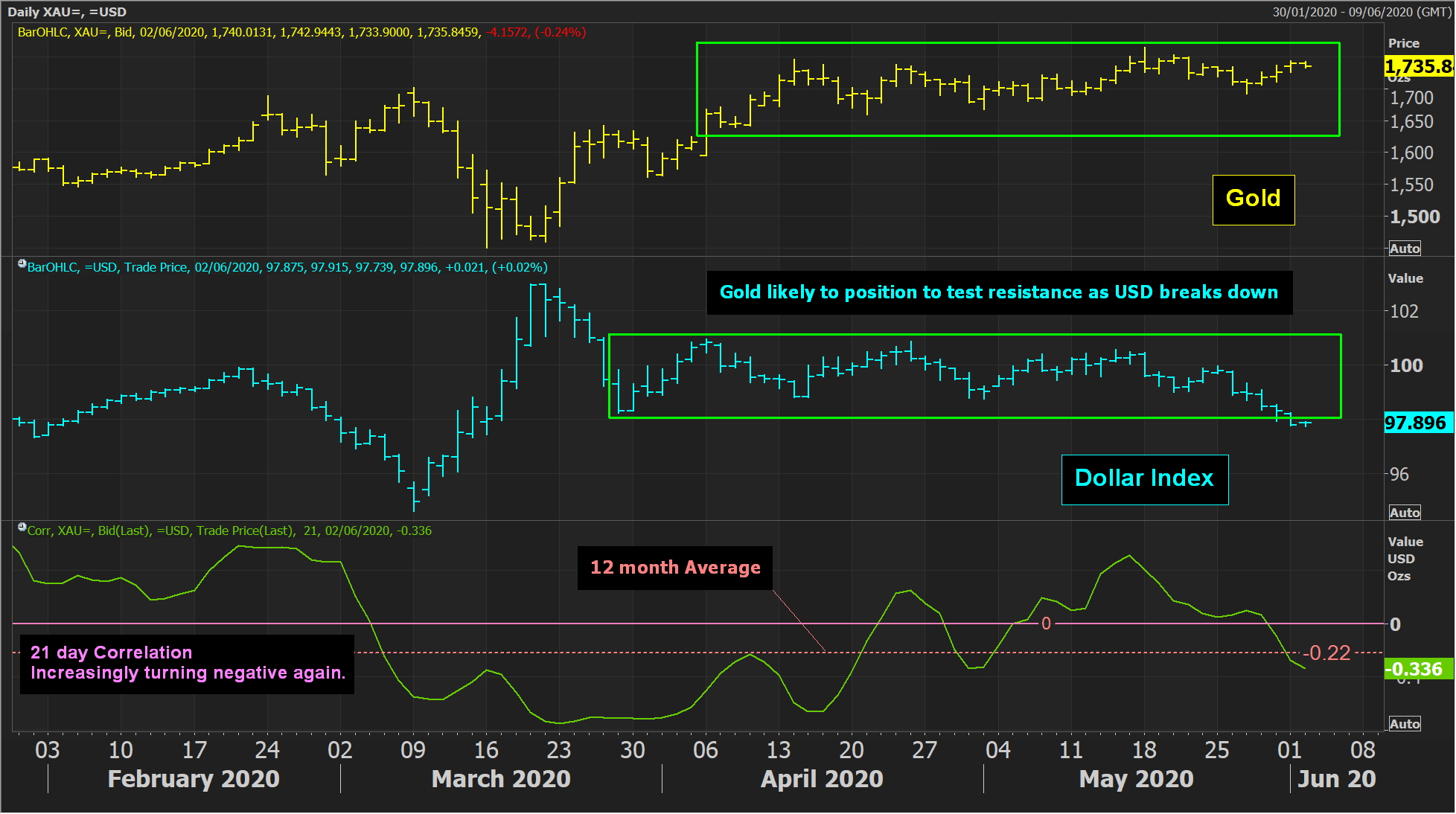 Looking more medium to longer term, we see the fundamentals for gold remain positive for support on gold. Real yields low or negative will sustain an attraction for gold, whilst deflationary forces help to support gold, along with enormously accommodative monetary policy. We continue to see near term price weakness as a chance to buy gold for longer term upside.

A third positive session in a row has improved the outlook on gold once more. However, the daily candlestick bodies are shrinking which suggests that the market is perhaps lacking the momentum to really drive the price higher for a decisive breakout to multi-year highs again. Today’s early slip lower plays into this too. We remain positive on gold over a medium to longer term basis and holding the support at $1693 helps to bolster this view. However, it is becoming clear that the bulls are lacking the impetus that was so prevalent during the late March to April rally.

The daily RSI seems to be rolling over at lower levels at each peak now. Although still holding consistently above 50 (a good basis of a trend higher), this is becoming more of a slow and steady bull run now. Despite this, we still look towards using near term weakness on gold as a chance to buy. Since May, the area between what is now an eight week uptrend (coming in today at $1700) and the rising 21 day moving average (today at $1721) has been where the bulls are supporting the market.

There may be another opportunity coming too, as the hourly chart shows a near term breach of a mini trend higher. The hourly RSI below 40 and hourly MACD lines below neutral would add a near term corrective signal. We would still be looking to buy again between $1700/$1722 though.

STRATEGY: The move to break the corrective downtrend has put the bulls back in control. This now means buying into intraday weakness for a test of the multi-year high at $1764. A failure below $1722 would lose some conviction in the immediate positive outlook of the move, but our conviction to buy into weakness would remain intact now until a breach of the multi-week uptrend and support of $1693. We expect further multi-year highs above $1764 towards $1800 in due course. 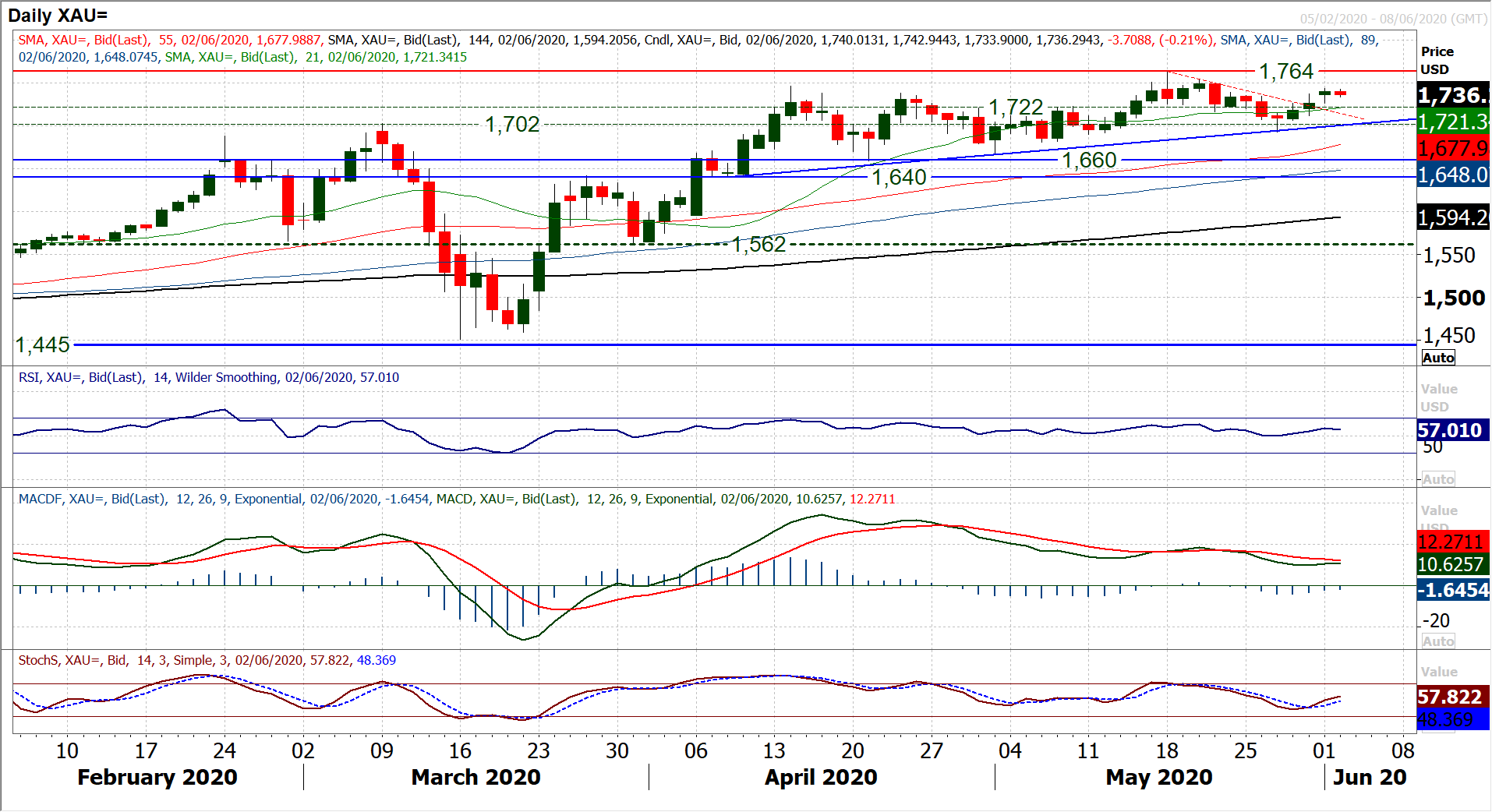 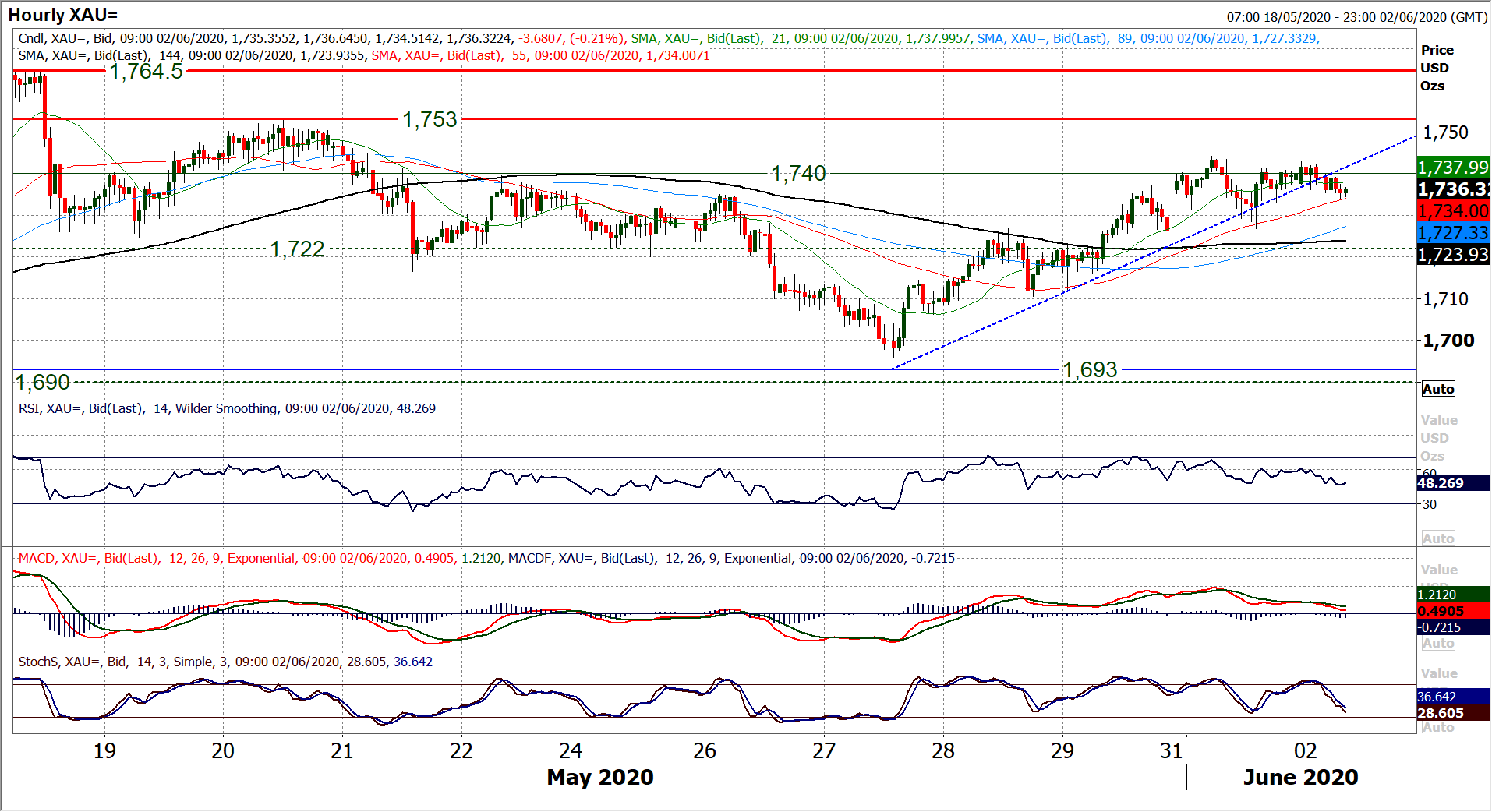 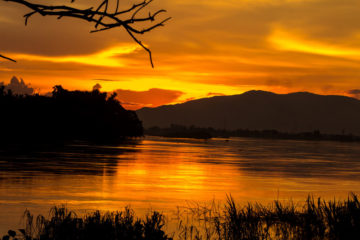 Gold continues to consolidate, but holding up well is still an encouraging sign

Trading outlook: With a consolidation for Friday’s US public holiday and lack of intent this morning, gold is a little subdued and could breach a multi-week uptrend. However, it is important for the bulls that Read more… 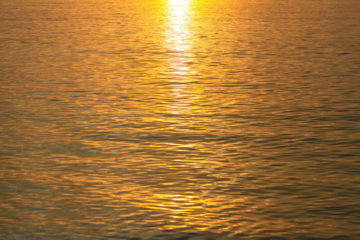 Trading outlook: The momentum of the bull run may have stalled slightly in recent days (something certainly not helped by today’s US public holiday), but gold continues to close consistently above the breakout of the Read more… 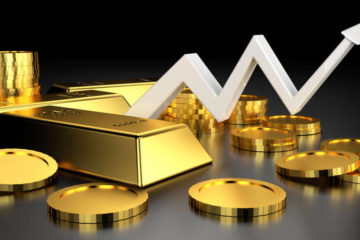 Trading outlook: The run into multi-year high ground has again been pegged back as the breakout has slipped, however for now, the bulls are still in control. We look to use near term weakness as Read more…